If you look sideways or stand next to anyone, no one thinks the Suzuki Intruder is a small displacement motorcycle because the modern pit makes viewers think these are 4-500cc cars.

“Your car has a large displacement, 400cc size”

“Is that so, it looks delicious, 40 members”

“Only light gas fuel tank, please put on a beautiful stamp, but the car is new, delicious”

A short conversation when traveling on the streets of Saigon, not of the elderly, the middle-aged or those who remember the beauty of the past, but the young people who know about cars, do not know about cars. proves that Suzuki has made changes in the design stage or brought back the trendy cars.

The large-displacement market is increasingly accessible, the 2-300cc segment is cheaper than the price, but the small 150cc car still has a certain place thanks to many distinct advantages such as maintenance costs or driver’s license. simple car. Yet also in this segment there are many choices from Honda such as CBR150, CB150R, Yamha R15, MT15, TFX, and many models from many other genuine and private brands, but mostly Sport line, Naked capital for certain ages.

Suzuki Intruder 150 is designed with all-purpose

The small-displacement Cruiser line, which is the segment with the least design style changes, has quite a few choices but has no less favorite than Sport or Naked. Not long ago around September 2020, Suzuki Vietnam suddenly brought the Intruder 150 version a new breath for those who like long, low-saddle steering, straight sitting posture and legs stretched forward. This is also a characteristic of the pure Cruiser which is a car for those who often go long distances because of the comfortable sitting posture. 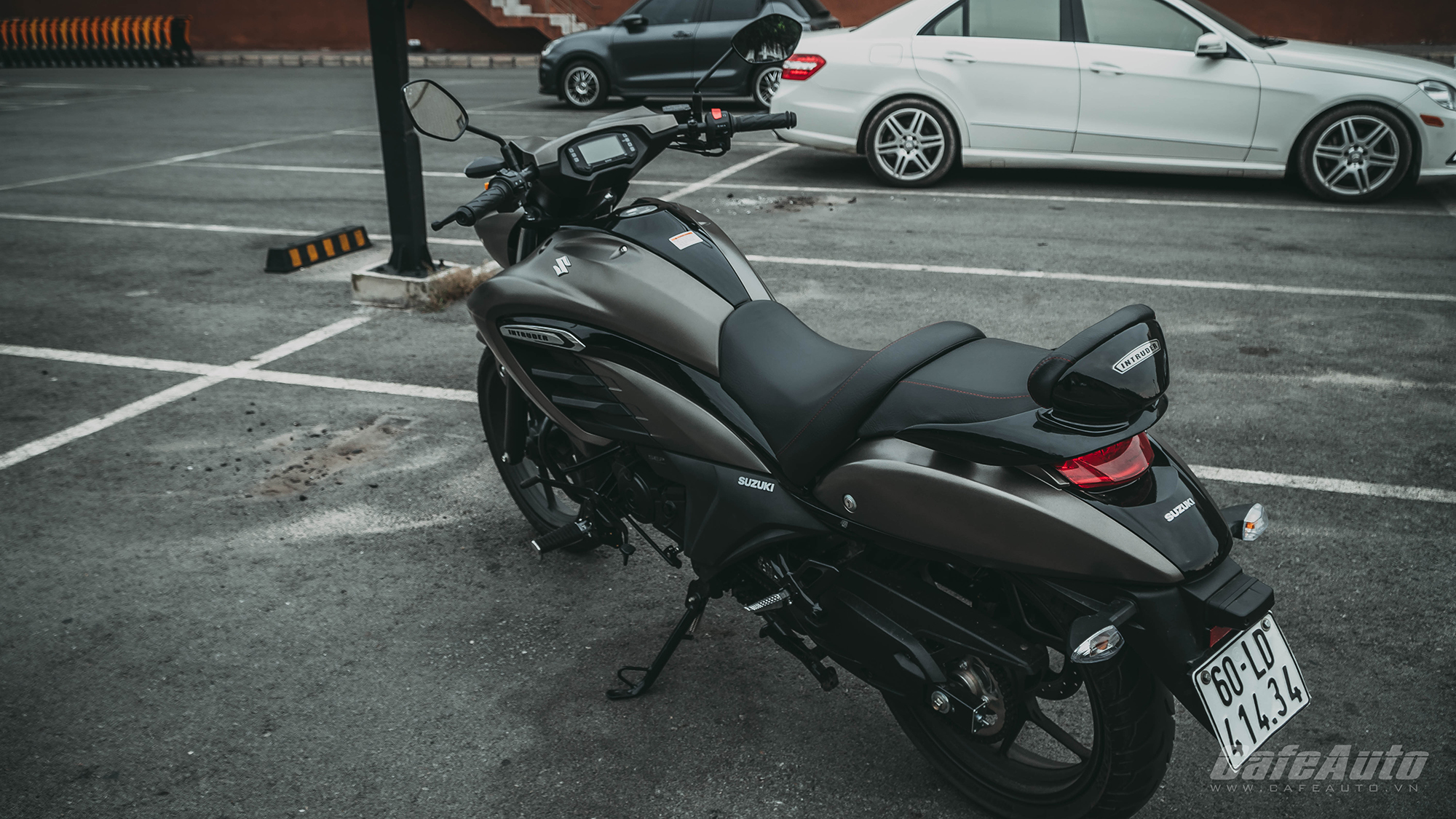 In fact, the Intruder 150 belongs to the more Power cruiser series, thanks to its more innovative, sporty and powerful design but still meets the comfortable driving position of a traditional cruiser. With a modern design, any outfit can still suit a car like a luxury Veston, oldschool vintage “dust” or even a jean short T-shirt. 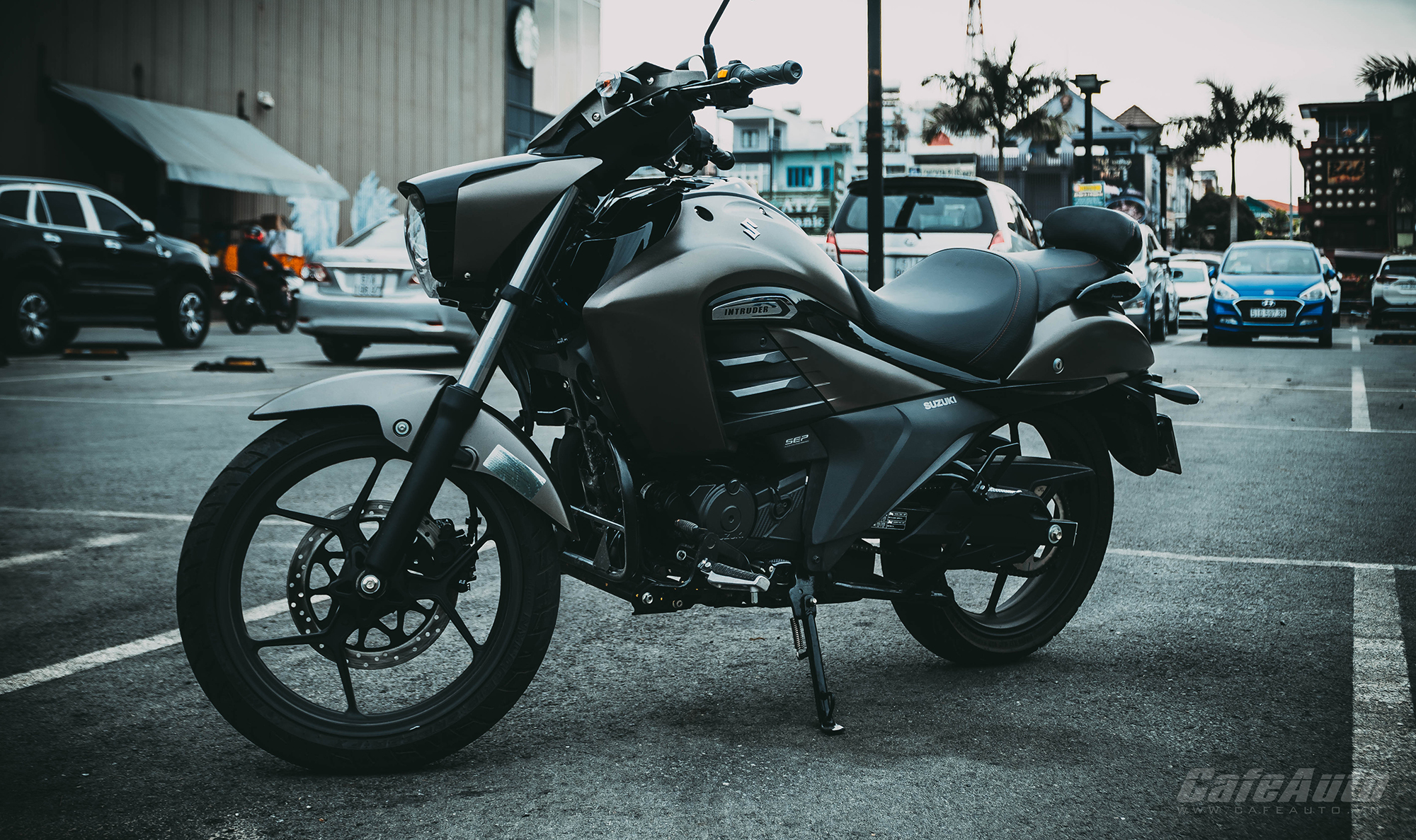 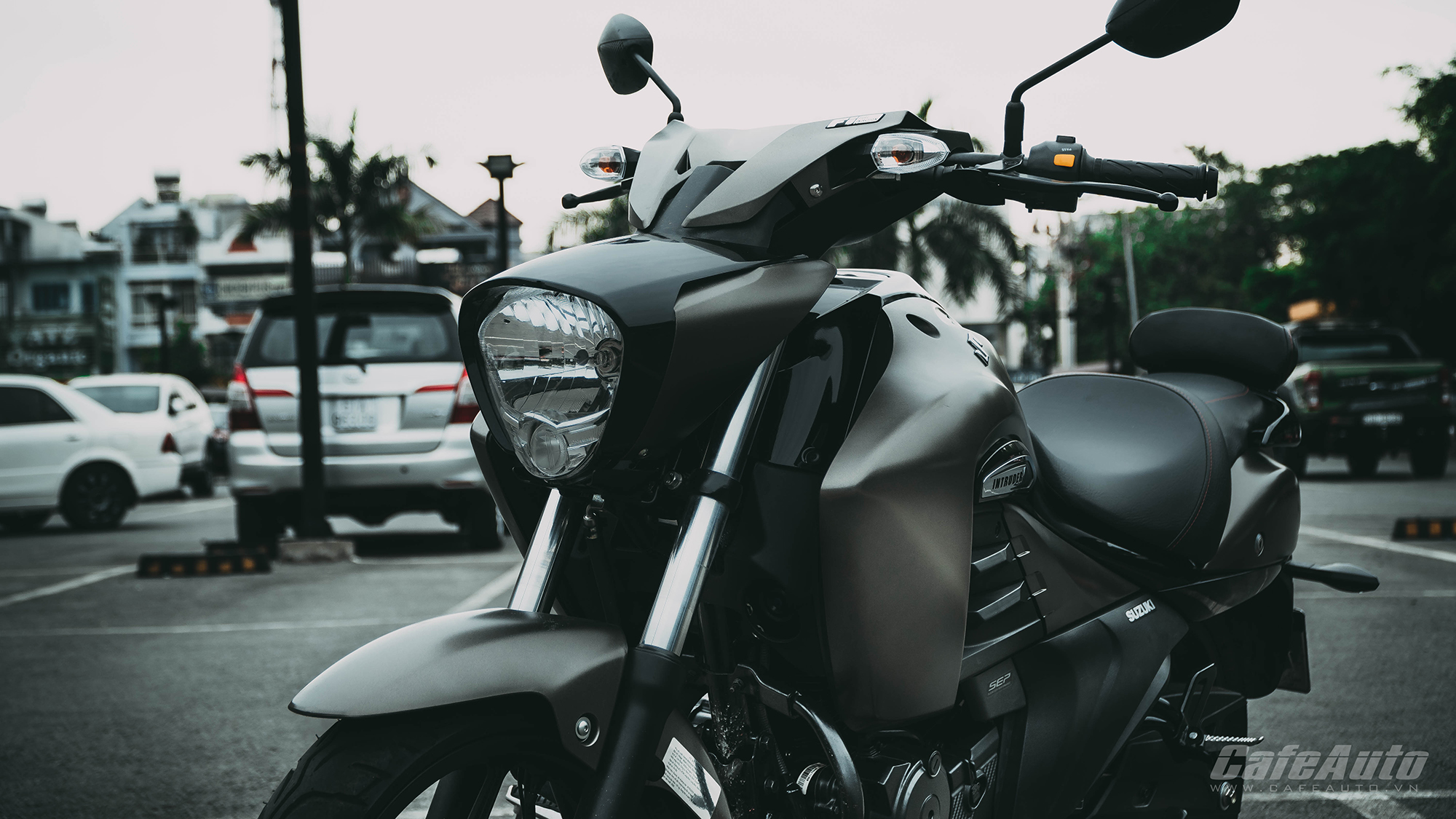 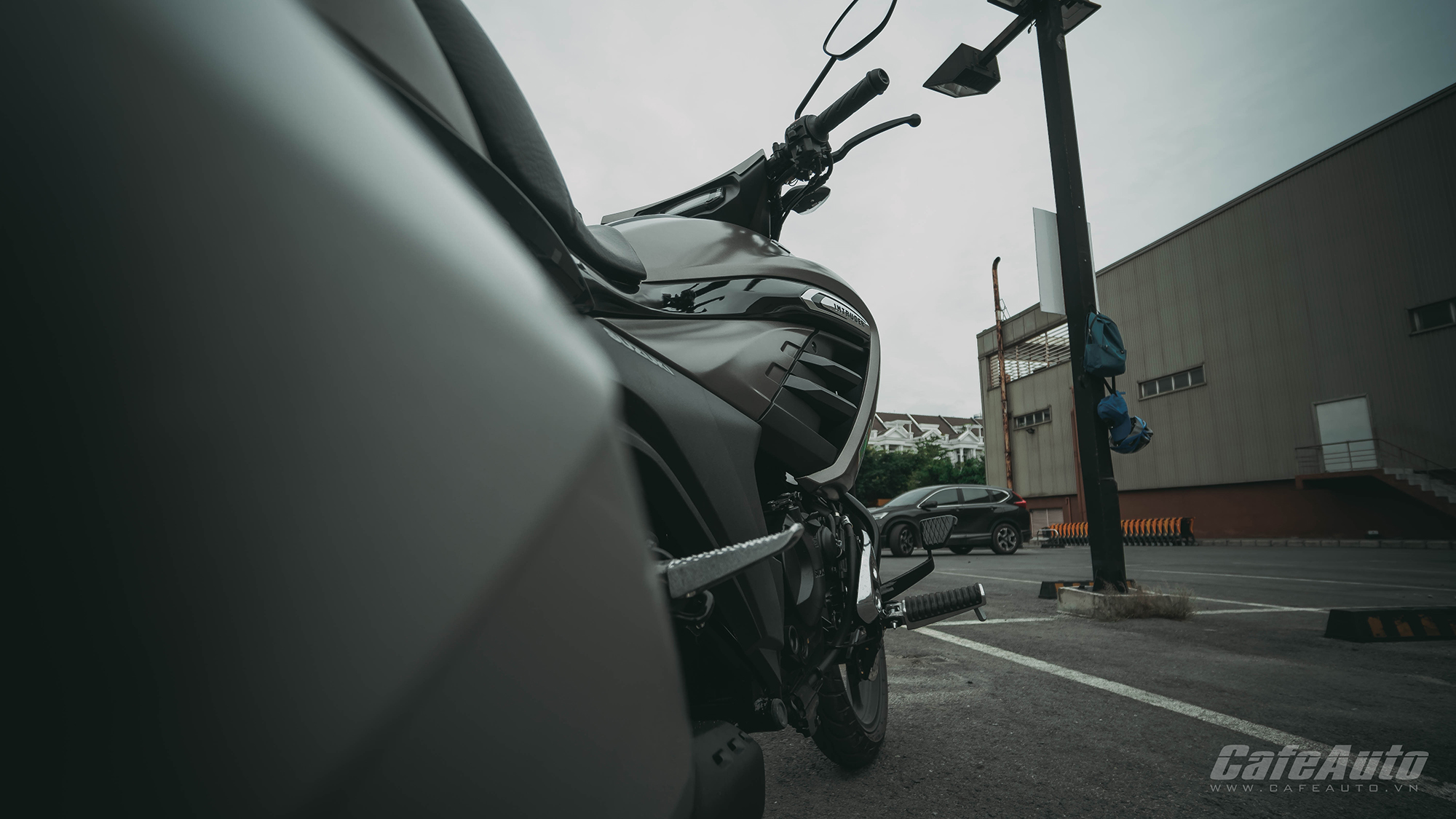 If you are an ordinary person, you can see at first glance that the Intruder 150 is strongly impressed by the muscular features, soft ribs and rounded lines that make many people think this is a 300-400cc. Although the car uses a traditional front suspension, the large diameter helps to conceal the vehicle’s limitations. The rear of the car uses a single shock absorber that combines both for a solid feeling when traveling at high speeds, or less worries about “losing the car” when accidentally passing potholes.

It is quite difficult to understand when Suzuki left the halogen headlights and the fog lights to the projector leds, of course, players can still replace them with LEDs at a price of several hundred to several million depending on demand. But those who play cruiser will feel that this is the classic classic design that is retained by the legendary M1800R Suzuki is still intended. 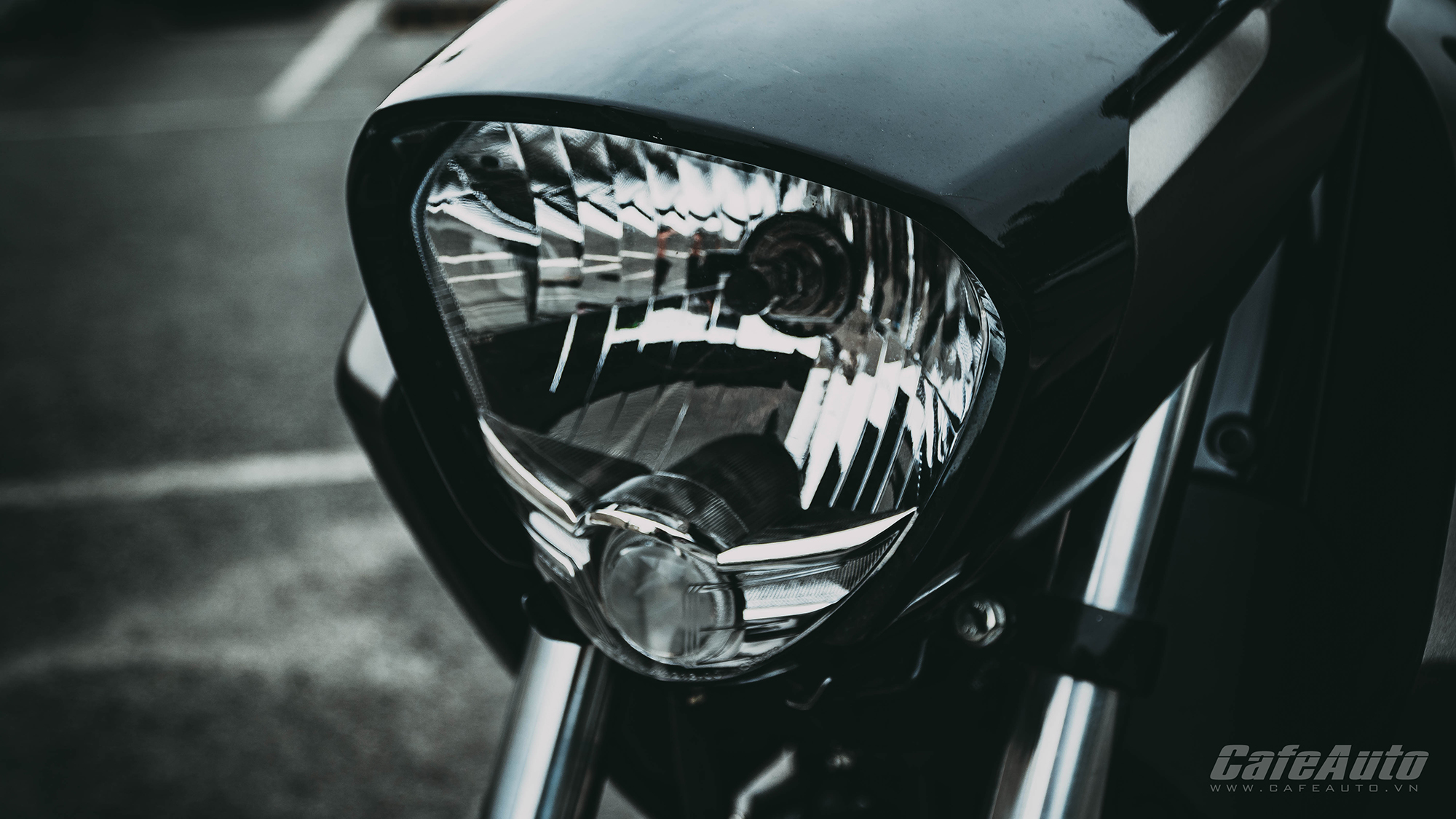 The handlebar is really impressive, it’s beautiful, the headscreens make the car difficult to criticize, because the 150cc series, the buttons are basic like cheap lights, turn on the engine, turn signals, passing,… in general is enough and the layout makes even small people can use it well. 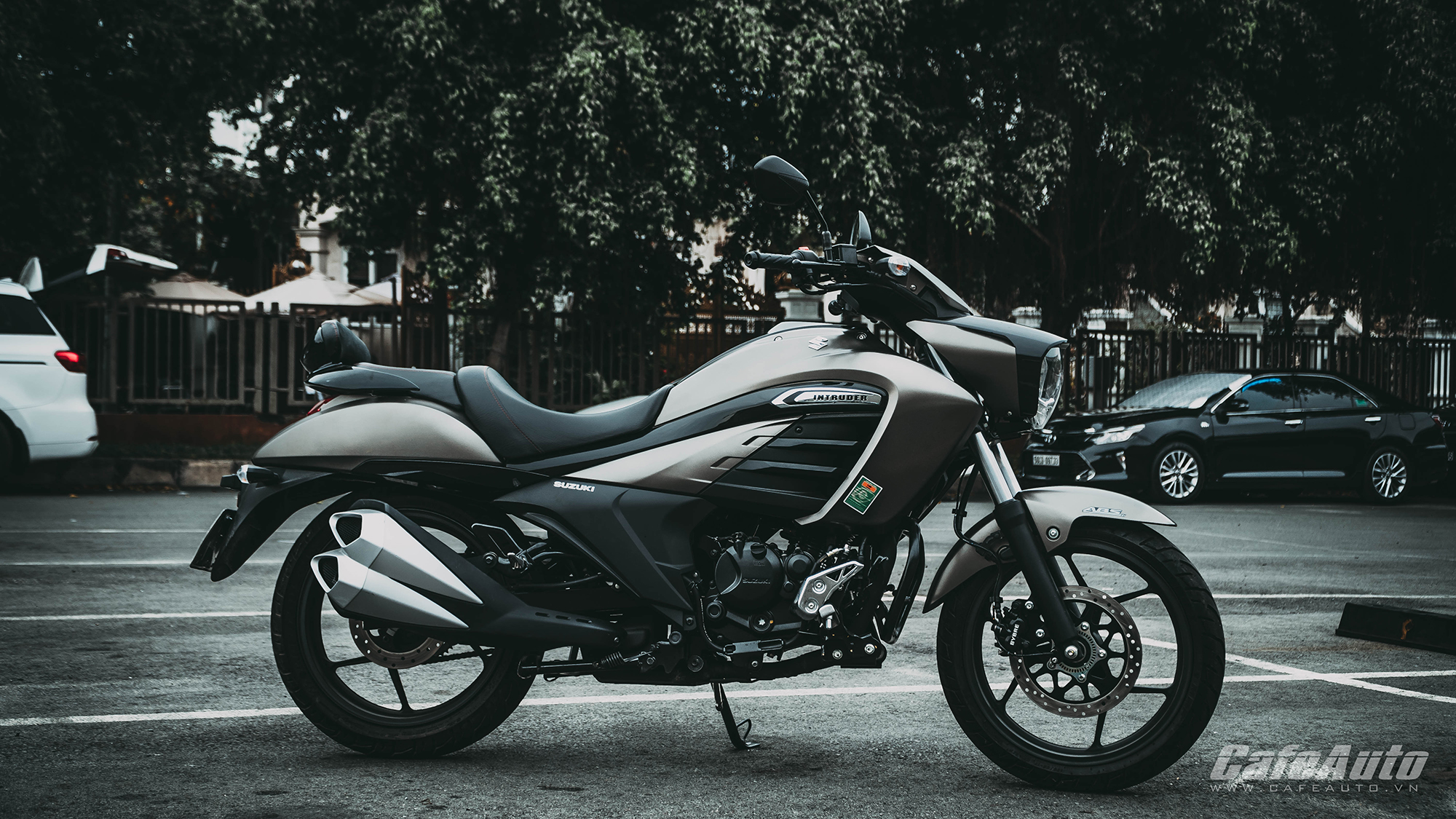 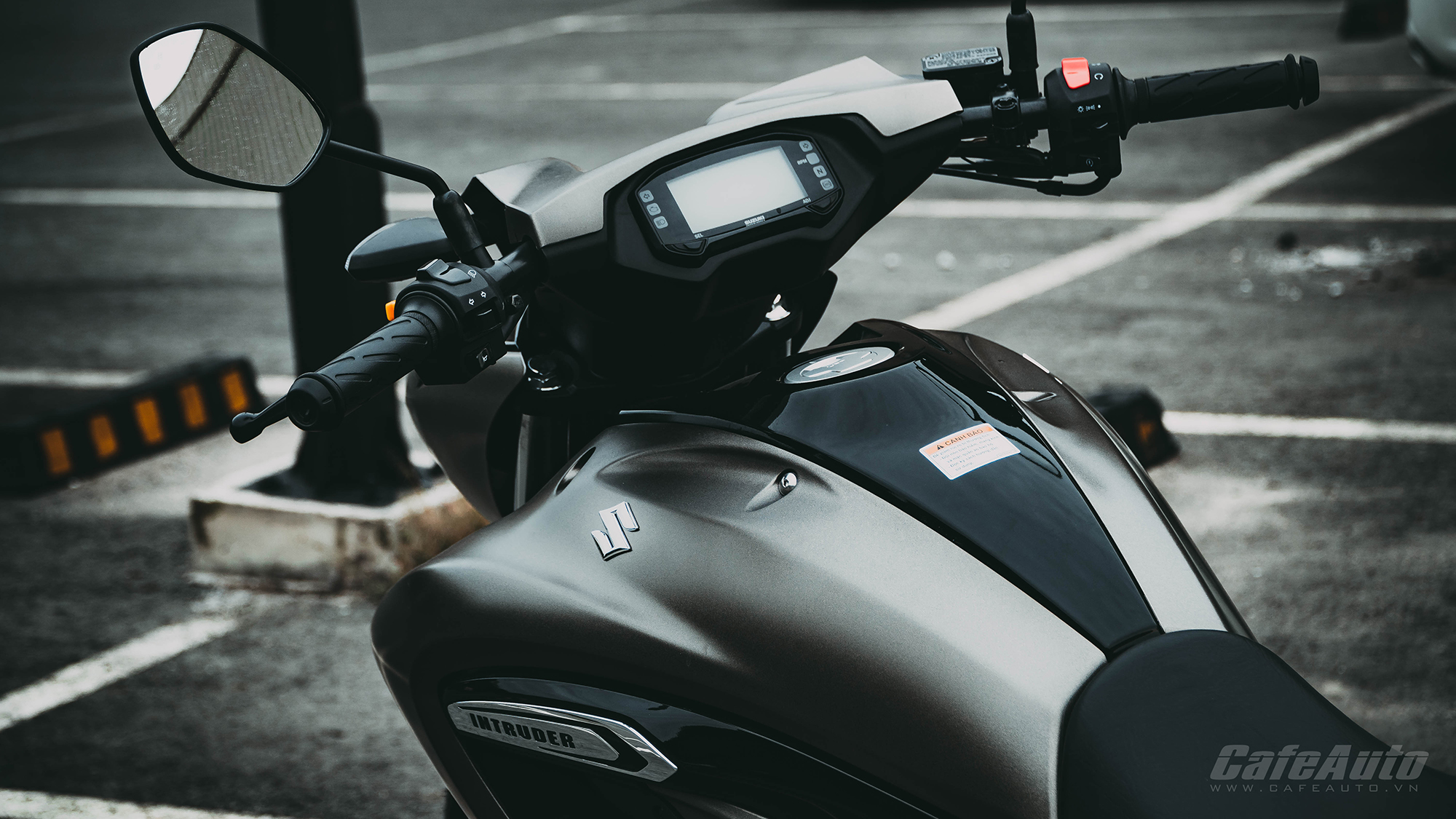 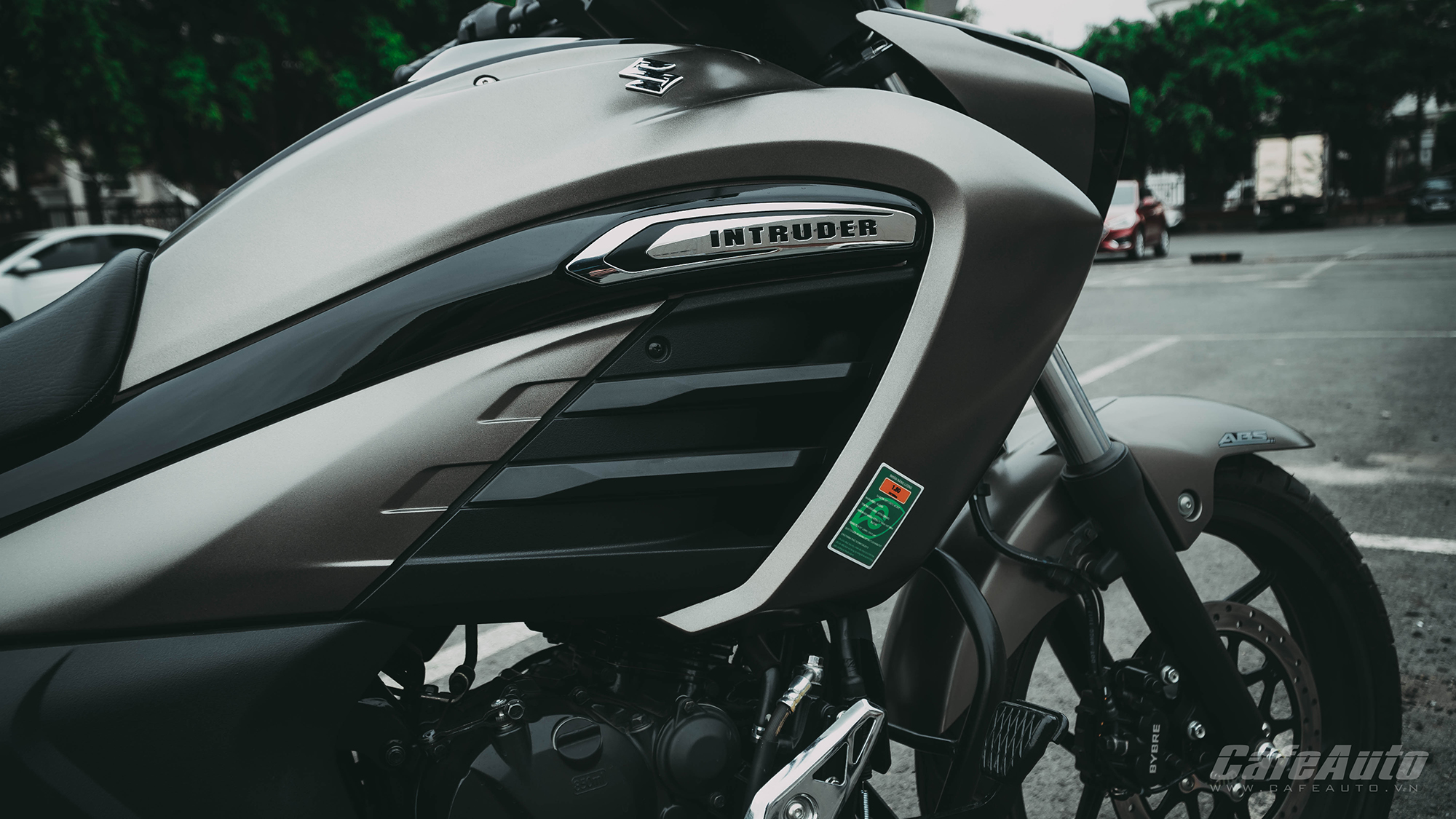 With the feature of a long low saddle, according to the manufacturer, the saddle is about 740mm high, so even those with a modest height can still support their legs carefree, the saddle mattress has a better part to support the hips. ensure comfort while riding. The Cruiser seldom travels alone, so Suzuki understands that it has equipped the rear saddle that is somewhat spacious, smooth materials and a back support to help the rear seater feel more comfortable not too leaning like sport or nake. Suzuki’s design has recently received quite a lot of positive feedback, simply combined with rough plastic cladding covering the 1-cylinder engine block makes the car more sparkling.

Operating the Suzuki Intruder 150 helps the rider to go further

If Sportbike takes you to the limits of technology, Naked Bike helps show your street skills, the Cruiser is softer and takes you to a far away place to return. You do not need to rest in the middle of the road because of tired back fatigue, you still have enough excitement to sip a glass of cool water after a long journey or sometimes just gently drink coffee every weekend leisurely. . 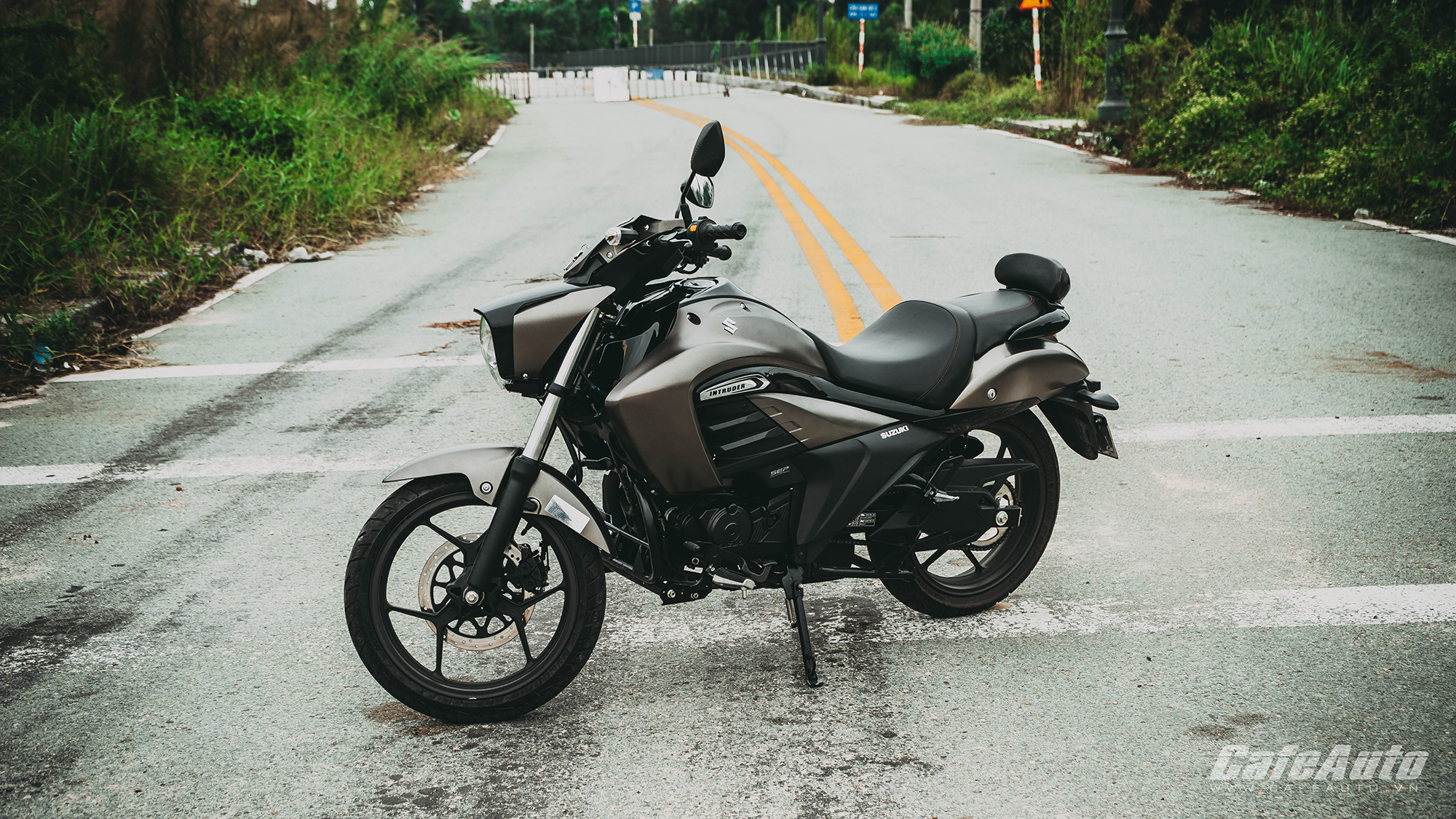 When it comes to power, it can go behind the 150cc underbones, but to go far, perhaps other genres have some room for cruisers in general and Suzuki Intruder 150 in particular. With the design of the Power cruiser, perhaps Suzuki wants to diversify the groups of car players more than just the cruiser. 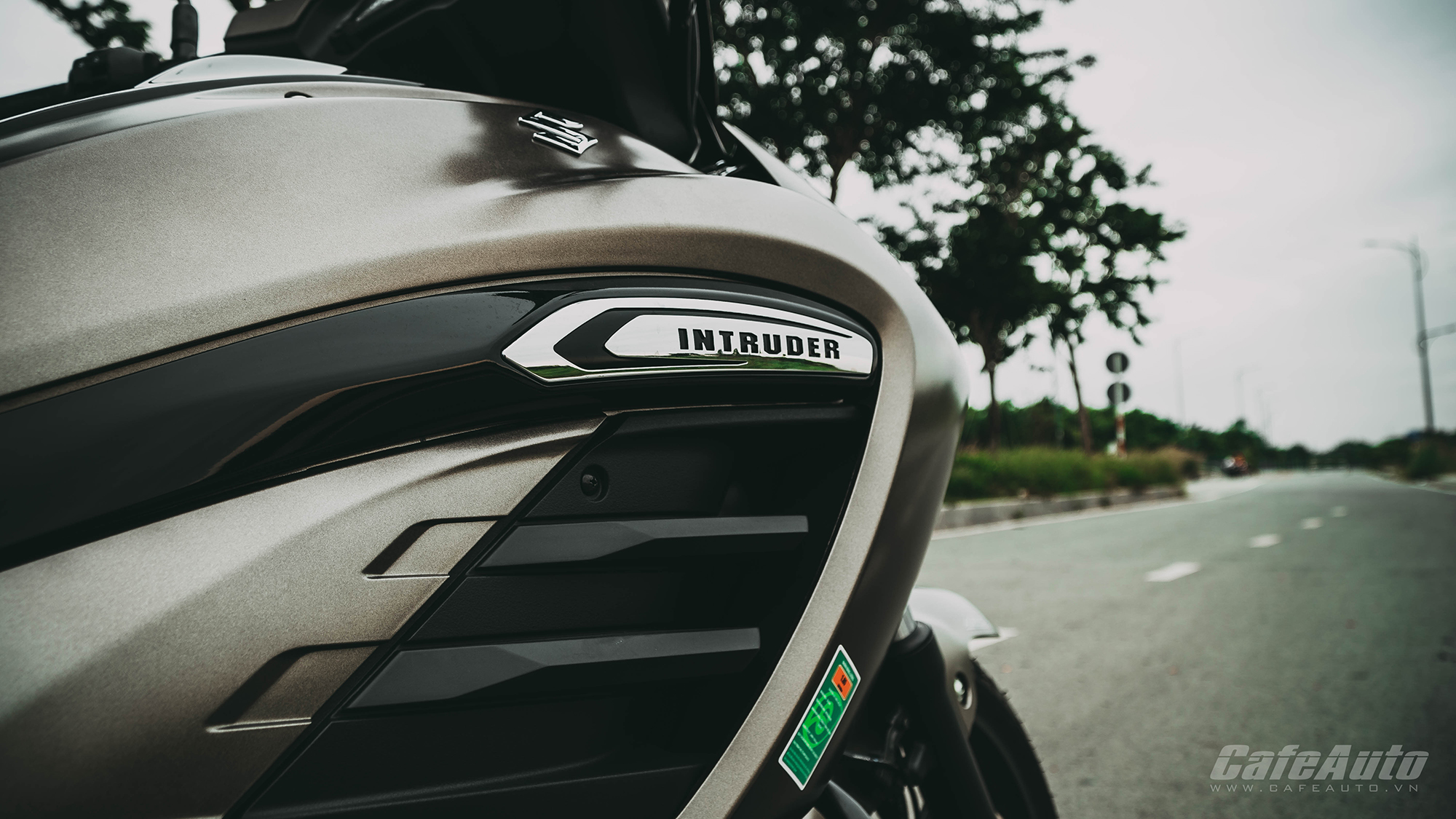 The engine block of only 13.4 horsepower is not strong for swimming racing, but the distribution of the gearbox’s gearbox allows the car to run at high speeds but only at low revs so that it can operate for a while. long without exhaustion. The promotion of power at low rpm helps the engine not to “teething”, thus avoiding the dragging, tired hands when holding for too long.

During the operation, the car meter has a good display even under the hot sun and turns red, black letters contrasting at night, the buttons are somewhat minimalistic, the details are as loud as the rpm. , engine number, speed, time, odo number, gas level are all arranged reasonably making it easy to understand even for the first time. 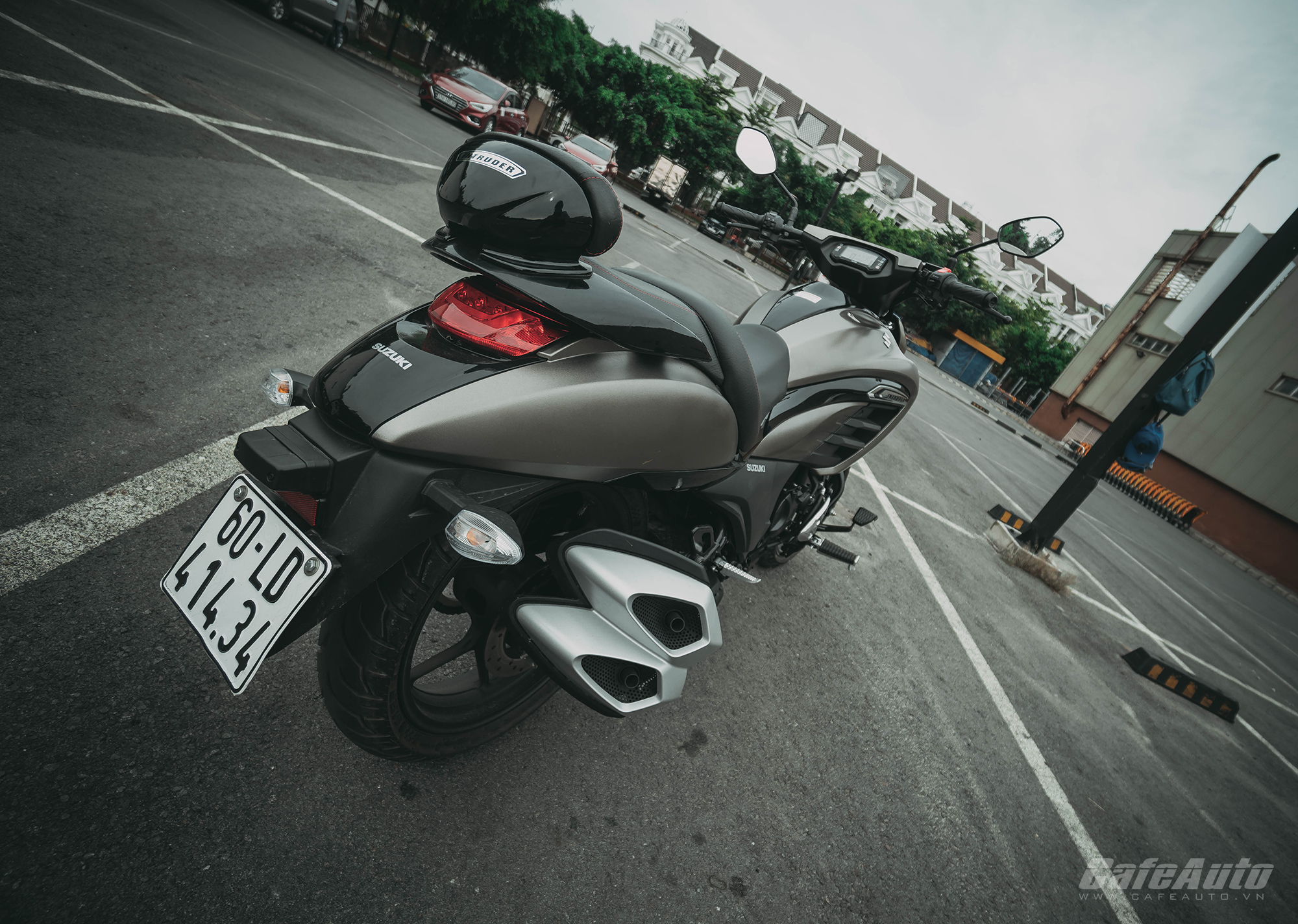 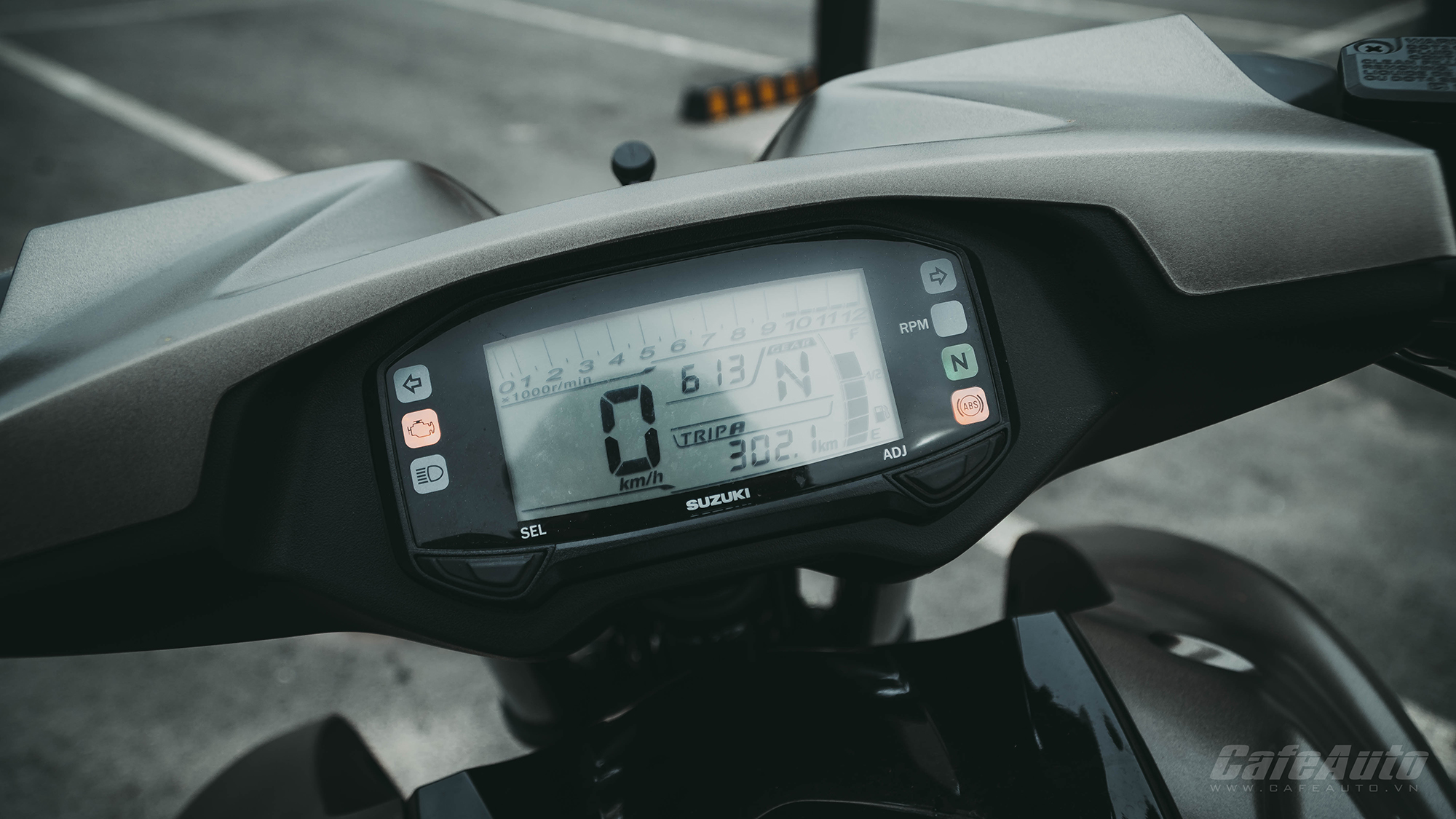 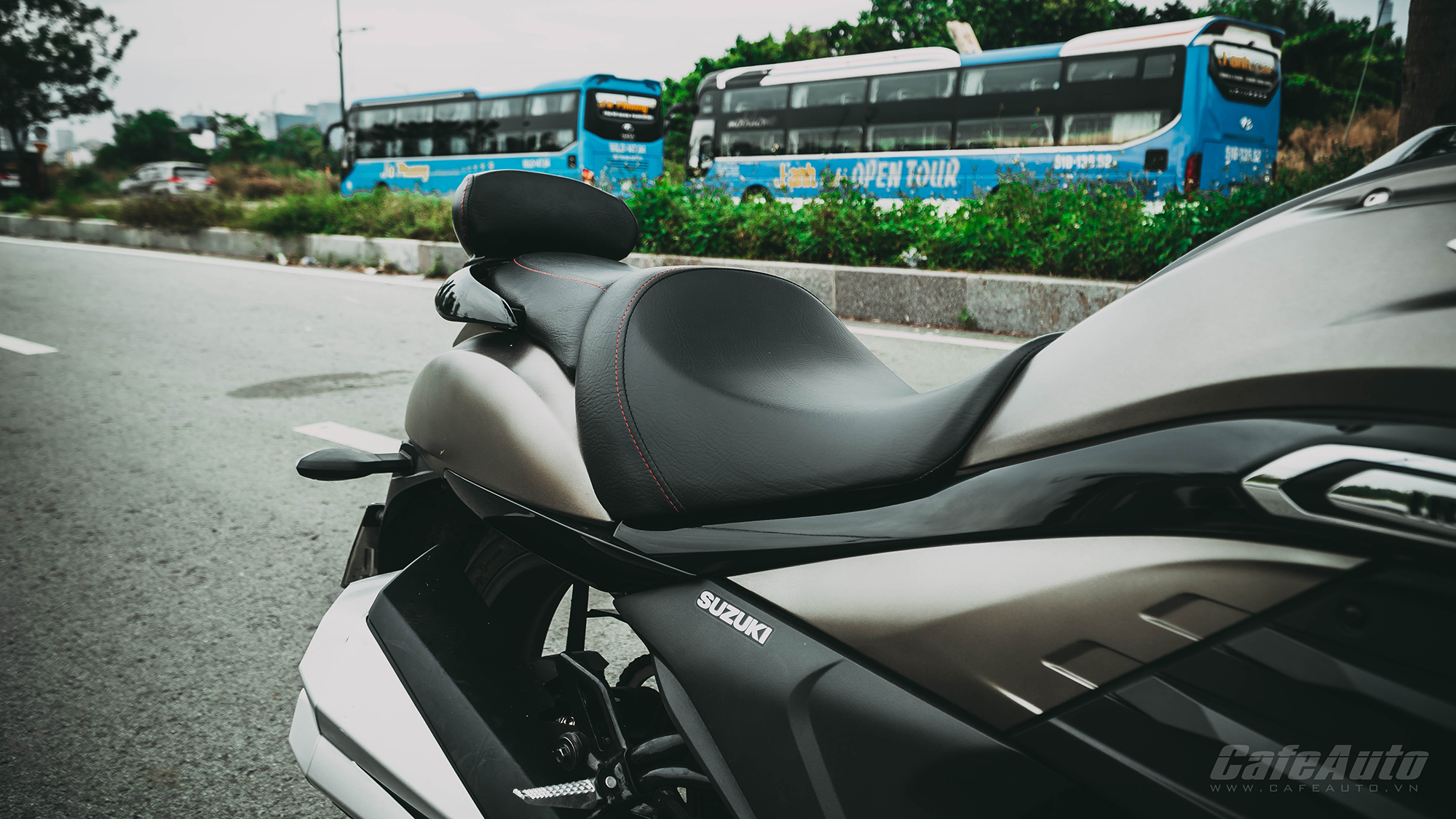 With the shape of a large displacement, the exhaust of the Suzuki Intruder 150 is only low and warm, not too loud enough to be gentle when entering the small entrance without affecting others. The design of the exhaust line is also very attentive when there is only 1 machine but is divided into 2 outgoing lines, making the tail become thicker. Not to mention the size 100 and 140 front tire for the rear wheel makes the car more compact, firmly embracing the crab.

Suzuki Intruder 150 is gentle in the alley, rough in the street

According to Suzuki, the Intruder uses a Robust engine with SEP (Suzuki Eco Performance) technology to significantly reduce the amount of gasoline but still ensure immediate acceleration. During the long test drive, it can be seen that the Intruder’s first accelerator gas is slightly more tense than some underbone or naked bike, although the weight is not light, especially when the accelerator is somewhat more violent, with It is a single cam machine SOHC, so players can still kick live numbers if they have enough time to understand the vehicle. 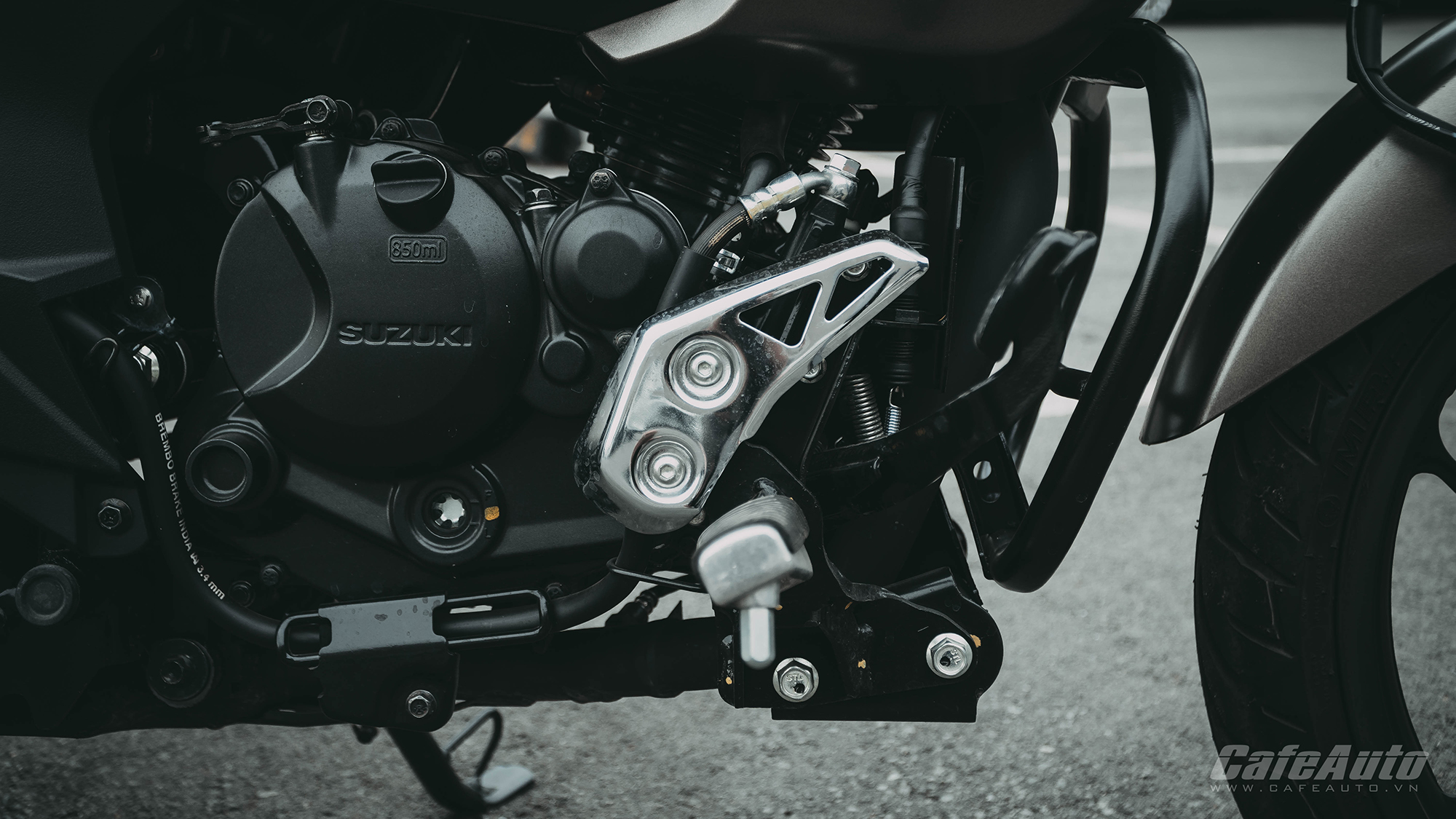 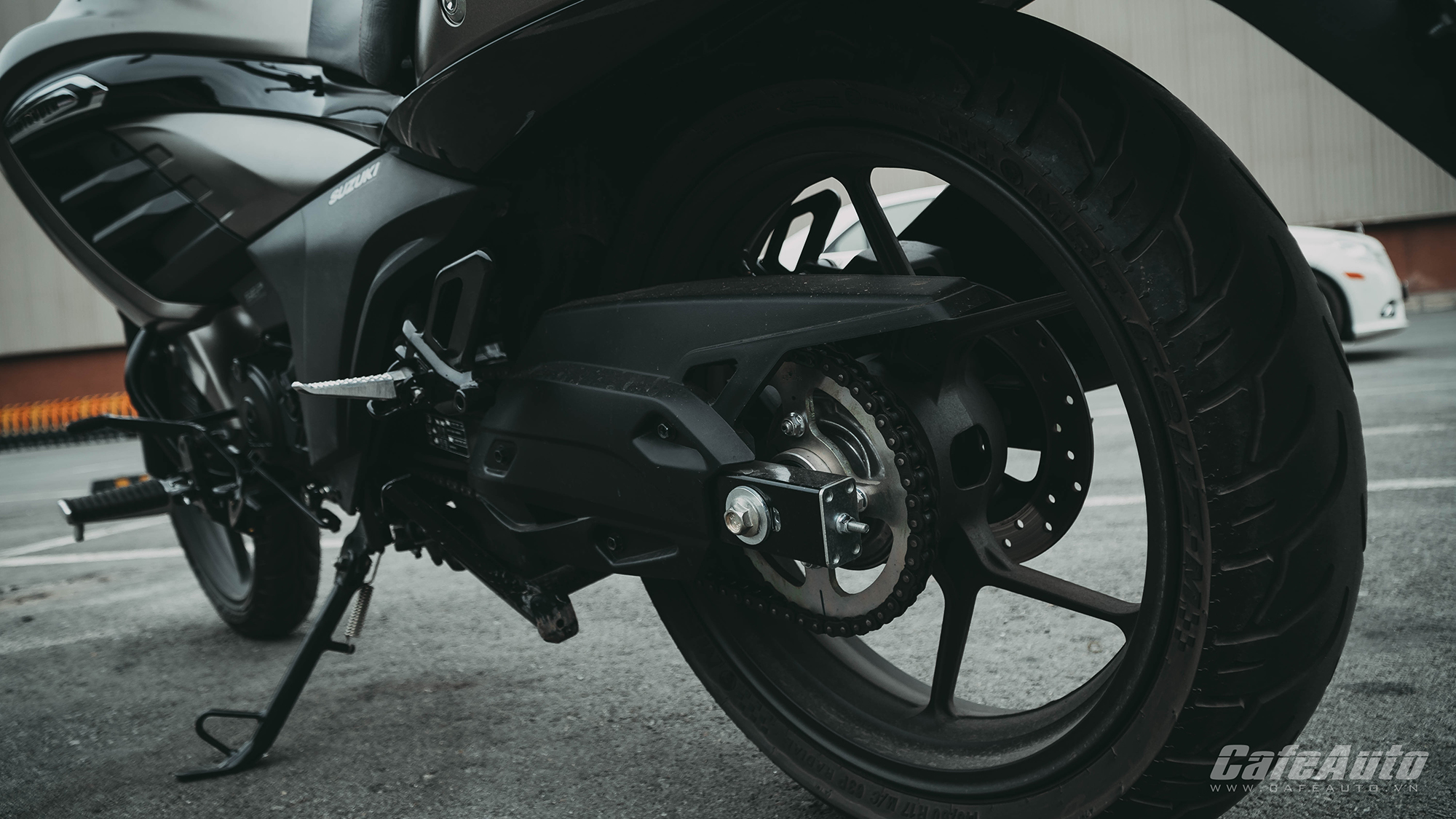 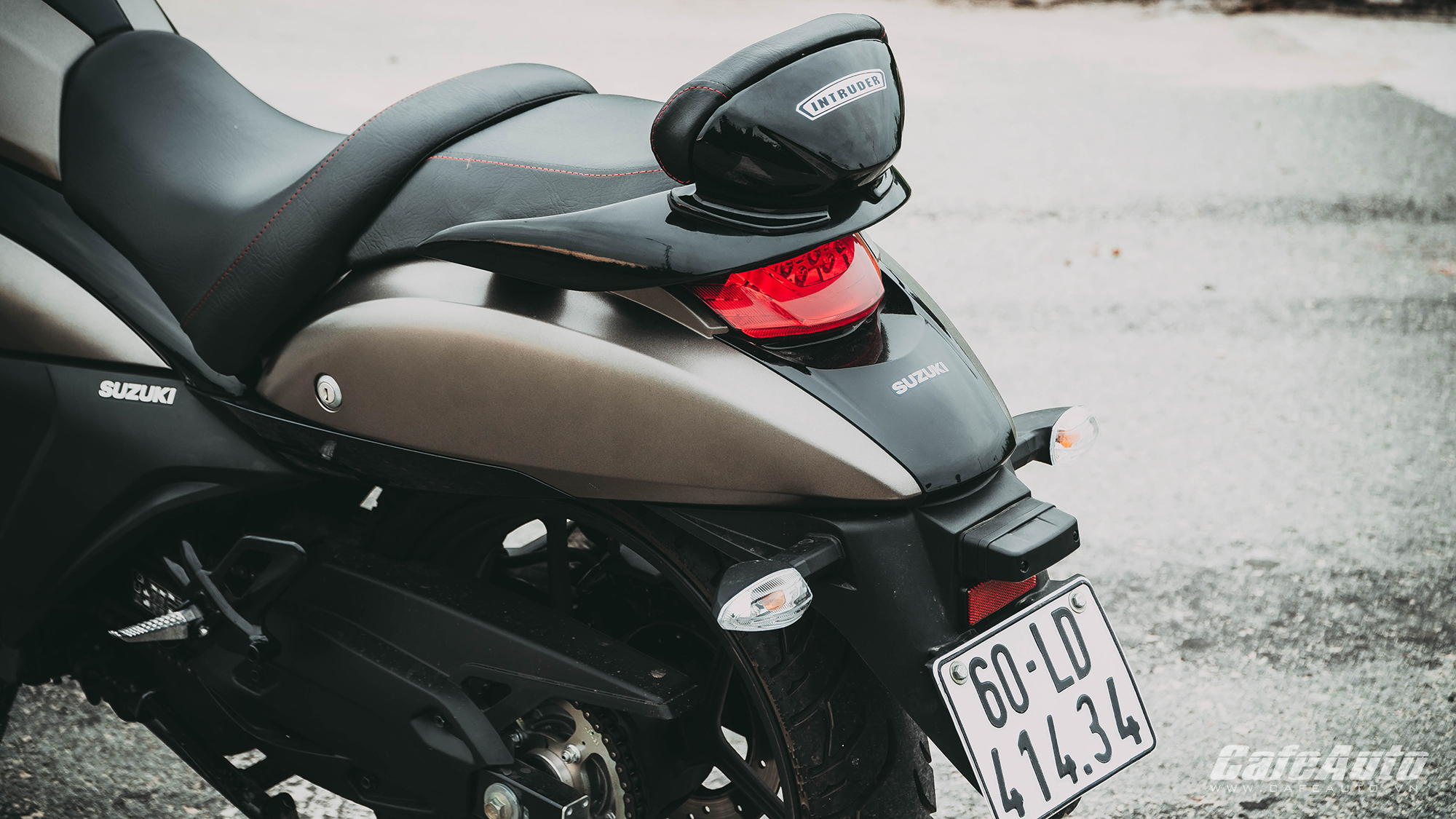 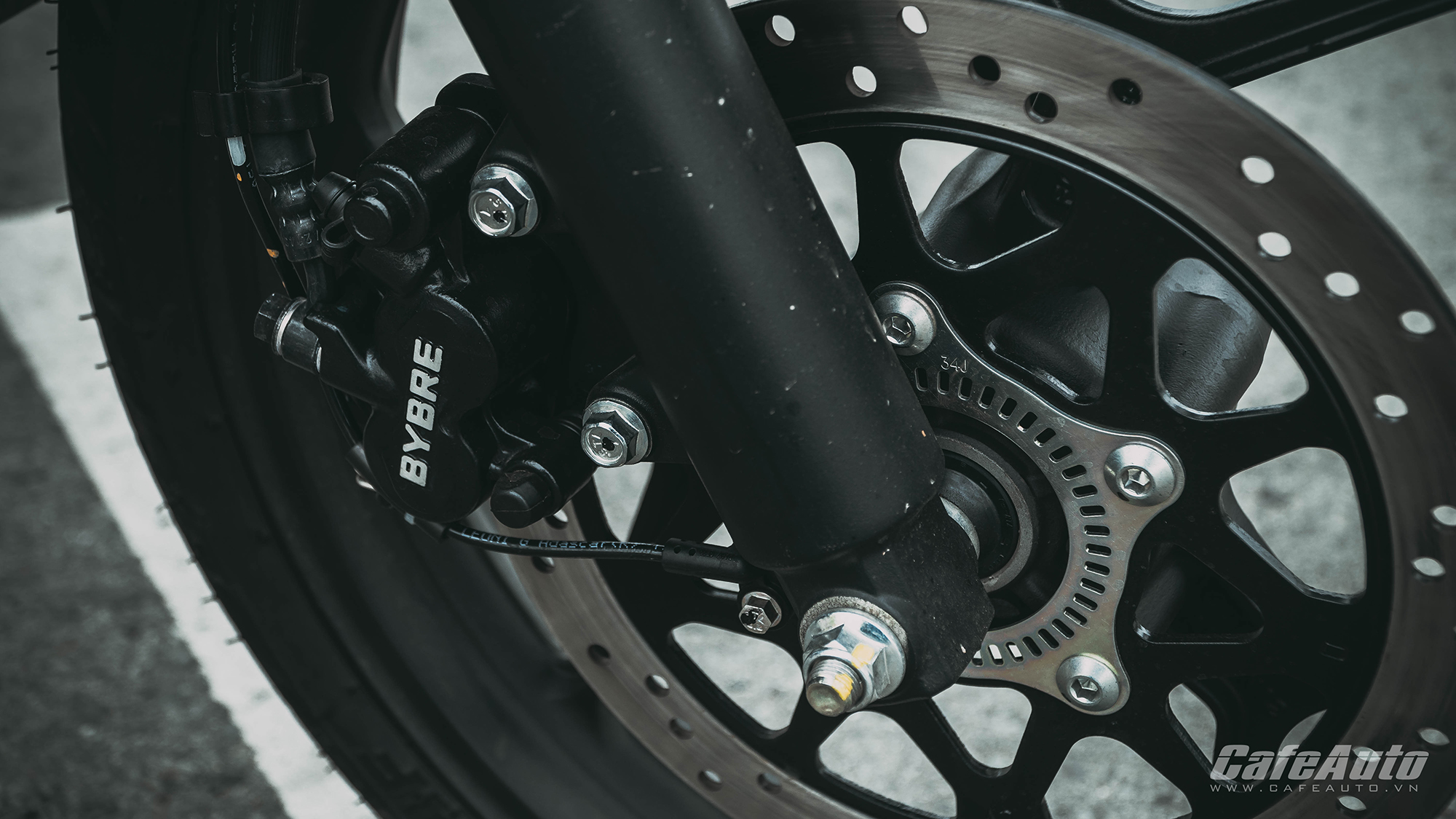 However, nothing is perfect with a length of up to 2m, turning the car in a small street is not an easy thing, but the layout of the steering wheel is just enough to help “stir-fry” or go on a crowded street. has removed the gauze somewhat, not to mention the front channel ABS brake system to help the driver calmly enough to handle the situation in many cases. With a price of less than 90 million dong for a complete imported Power Cruiser from India is a new choice between a wave of too many Sport and Naked Bike. With the new changes in approach, the Suzuki Intruder 150 fits well with a variety of cultural styles from the street to the office, young people to middle age can confidently show the steering.

Post Views: 192 The outstanding large-scale Scooter YAMAHA TMAX that has swept Europe and Japan and other places will now increase the displacement of 31cc and evolve into the seventh-generation TMAX of 560cc. Speaking of TMAX, its selling point is not to lose to the powerful sports performance of super sports cars. This time, in […]

Post Views: 103 In recent times, the monthly moon cup has become the topic of discussion among many women. And do you know What is moon cup? How effective? How to use menstrual cup like? Read the article of Quantrimang.com for detailed answers! content What is menstrual cup? Should we use the menstrual cup? The […]

Post Views: 51 (Techz.vn) With only VND 70,000, customers who register successfully will have 30GB / month immediately, release the gas, cheaper than MIMAX70. ST70 Viettel is a special promotion 4G package for students who receive ST70 promotion message from CSKHVIETTEL (access the My Viettel application to check if you can join the package). With […]