Endoscopy Huawei P30 Pro: Components Japan contributes 58 times more than the US, can produce regardless of embargo – VnReview


In the midst of the commercial war, can Huawei produce smartphones without going to the US?

Turns out exactly as iFixit said, the amount of US components in the latest flagship P30 Pro is only 0.9%. If compared with Japan with the largest share with 53.2%, the US contribution is only 1/58 times that. According to the Nikkei, the embargo really puts pressure on the global smartphone supply chain, stretching from Japan, Korea, Taiwan to China and more.

Huawei will have to seek replacement for 15 US suppliers, who must certainly abide by the ban. Although it only accounts for 0.9% of components but obviously, a smartphone that wants to operate fully cannot lack any components. The figure of 0.9% is small but if not, the production of smartphones of the company will still be delayed.

Huawei can replace 15 US suppliers, equivalent to 0.9% of components to continue producing smartphones

Performing a detailed P30 Pro endoscopy, Nikkei found that the content from the US was negligible. Only less than 1% of components are provided by US companies. According to Fomalhaut Techno Solutions, Japan and South Korea are the two countries with the most with 53.2% and 34.4% of components respectively. The P30 Pro is the "offspring" of many countries where the Asian region dominates, when China accounts for 4.9% and Taiwan 5% components.

But in terms of value in production costs, components from China including BOE's OLED screens have the most expensive cost, accounting for 38.1% the most. Then came Japan with 23%, South Korea 7.7% and Taiwan 7.9%, the rest were US 16.3%. Theoretically, Huawei could remove American companies from the supply chain and find alternative sources from Taiwan, Japan, etc. They can do it! Similar identification from iFixit. 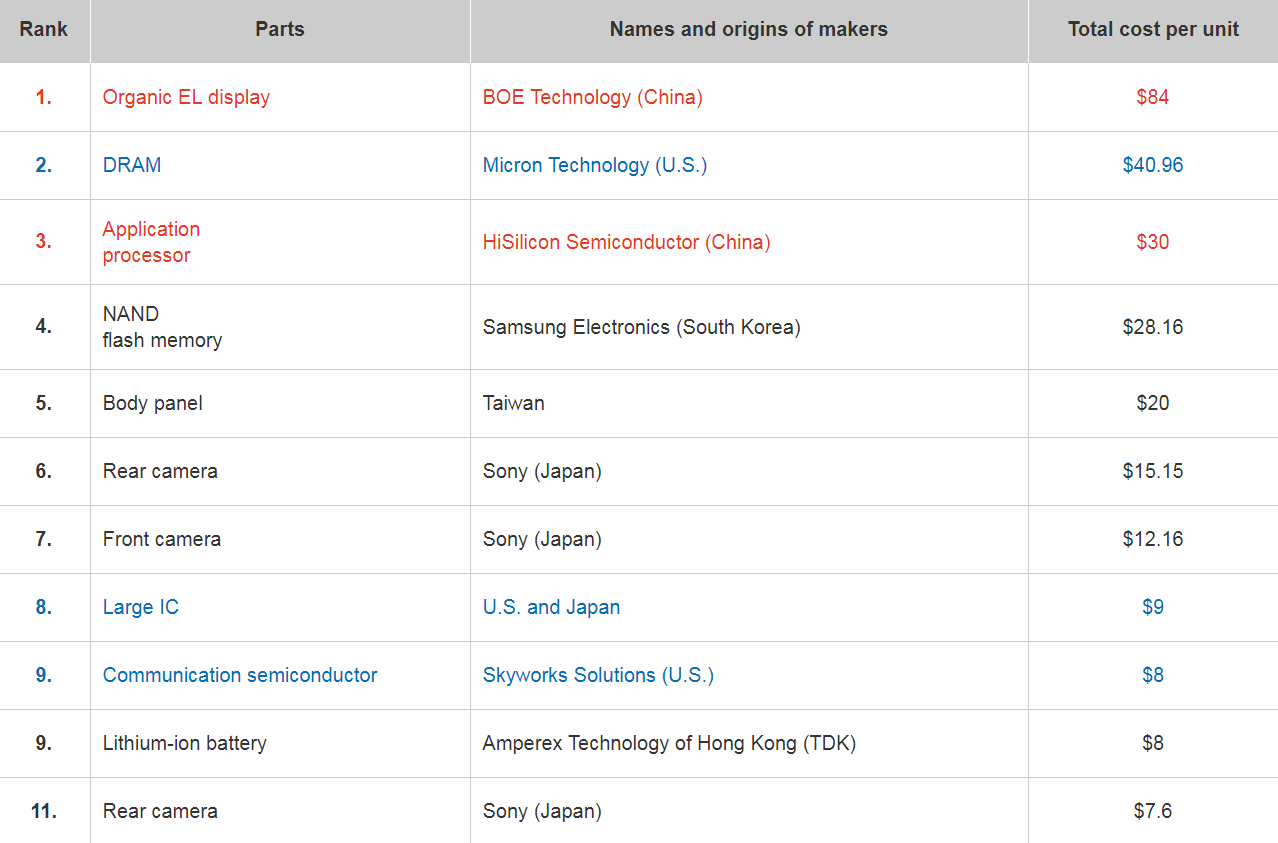 Top suppliers with the highest component value, the US only occupies 2 positions

In terms of component supply, many Asian companies are leading the way with the US

Another victim of the war is Apple. If President Trump resolutely taxed imported goods from China, the iPhone could not escape fate. Especially this fall, the company will introduce a new generation, in the context of iPhone sales plunging continuously from the fourth quarter of last year, iPhone 2019 is having trouble right from the launch. Analyzing the highest-priced XS Max of the company, it was found that China accounted for less than 1% of the value of production components. However, this place is the main assembly and assembly point. 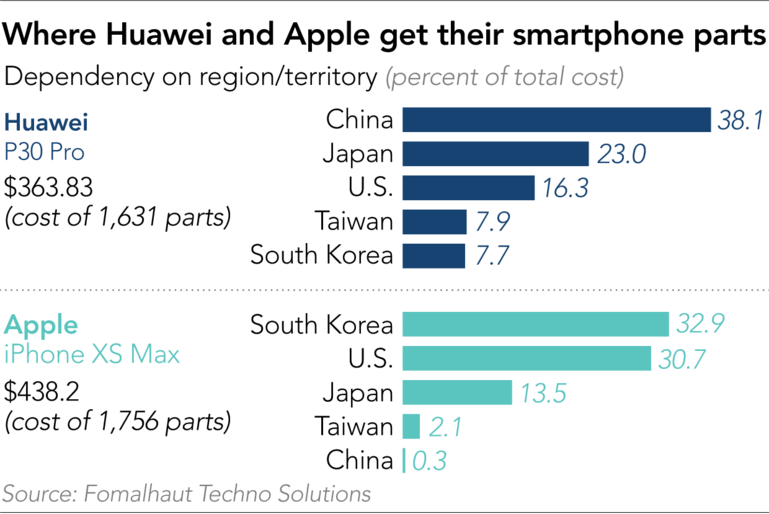 Value of components produced by country, based on two models P30 Pro and iPhone XS Max

In the 25% tax school on iPhone, customers have to pay USD 1,160 for XS Max instead of 999 USD as currently, Morgan Stanley estimates. Apple in 2018 purchased components from 41 companies in China and Hong Kong. Fomalhaut Techno Solutions said about 70% of components are manufactured by companies outside the United States.