Elon Musk sold out the villa, is renting in a 37 m2 house


Not long ago, Tesla and SpaceX CEO Elon Musk said he would put all of his homes for sale. Then he moved to Texas. However, it is not clear where Elon Musk is exactly right now. People speculated that he might have bought a nice house around Austin. However, in reality that does not seem to be the case.

The Tesla CEO tweeted earlier this month that he only has one home in San Francisco Bay that is rented for events. If sold, “the house will hardly be used unless the buyer has a large family. This is what can happen.” He added that he currently lives in a $50,000 house in Boca/Starbase, rented from SpaceX.

It turns out, based on Teslarati’s research, along with a few other close sources, Musk’s statement is 100% true. He is living in a ready-made house about 37 square meters, movable developed by Boxabl.

According to Teslarati, a source said that this house is a real Boxabl Casita (mini “building block”). It can be easily moved and installed and can also be placed in new locations with relative ease. As can be seen in the image below, the house that looks like Elon Musk’s can be towed away by a Tesla car. 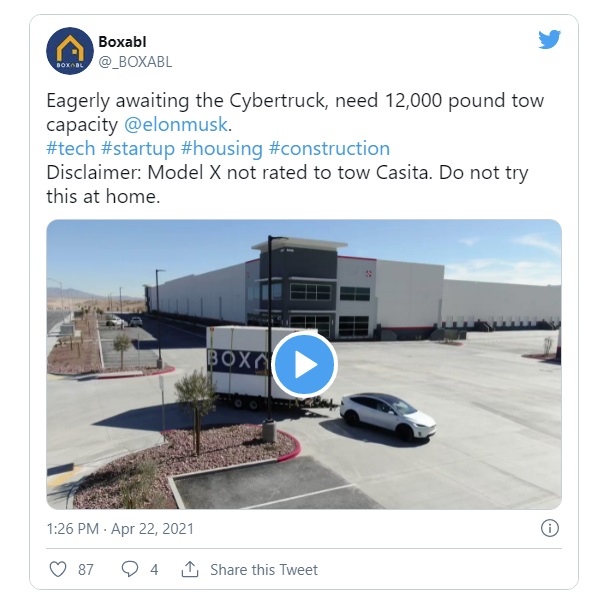 Back in December 2020, Boxabl seemed to have hinted that Musk may have bought one of their homes. Teslarati said the construction company mentioned “a particular client at Boca Chica – someone who wanted a Falcon 9 rocket poster on the door”. In March 2021, the World of Engineering newspaper sent out a tweet with a video above that specifically mentioned “a famous executive”.

Here is a video of the design and construction process of Boxabl’s houses similar to the one Musk is said to be living in:

The process of building the houses of Boxabl.

Musk, now 49, first announced his plan more than a year ago to sell his homes and most of his possessions as a way to refute criticism of his wealth.

“In fact, I’ll become someone who doesn’t own any assets but shares in the companies I lead. If the work is stressful and requires concentration, I sleep in the factory or office the room is fine. But since I have children, I need a larger space for them. Renting a house or something like that would be a reasonable solution.”

At the end of May last year, Musk announced that he plans to sell “most” of his assets and will “not own any houses”. Since then, the businessman has put many of the homes in his nearly $100 million portfolio for sale. In 2020, Musk also sold a lot of high-value properties including three residential homes. Los Angeles and an estate that once belonged to actor Gene Wilder.