In this article, learn more about the ectopic pregnancy, its causes, symptoms and forms of treatment. 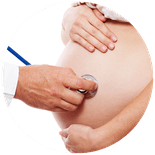 Ectopic pregnancy is a complication of pregnancy that is characterized by development of the fetus outside the uterus of the woman. In 95% of cases, the pregnancy starts to unfold in the tubes and, therefore, this condition is also called fallopian tubes. In more rare situations, it can also occur in the ovary or abdominal cavity.

Ectopic pregnancy brings serious health risks for pregnant women and must be dealt with urgently. For the fetus, ectopic pregnancy practically eliminates the chances of survival because only in the womb is the nutrition and oxygenation of the fetus fully guaranteed. Often, the woman suffers spontaneous abortion within 12 weeks. When this does not occur, there is a risk of rupture of the tubes, a severe condition that can be fatal for pregnant women.

The causes of ectopic pregnancy are related to situations that prevent the fertilized egg from traveling through the tubes and reaching the uterus. Among them are congenital abnormalities, pelvic inflammatory disease (due to infections such as gonorrhea and chlamydia), damage and scarring to the tubes caused by surgery, smoking or previous ectopic pregnancy.

Symptoms of ectopic pregnancy are menstrual delay, which usually leads a woman to discover pregnancy, abnormal bleeding after diagnosis of pregnancy and lower back and abdominal pain. It is also possible to identify greater sensitivity in the breasts and cramps.

Advancement of the complication causes more important symptoms such as increased pain, low blood pressure with the possibility of fainting, shoulder pain due to blood pressure on the diaphragm and palpitations. This condition usually requires urgent medical action.

Upon realizing any of the symptoms listed above, a woman should see her doctor for tests. a pelvic examination evaluates if there is obstruction in the tubes. Following, an examination transvaginal can already detect ectopic pregnancy. Finally, blood tests measuring the hormone beta HCG confirms the picture. The concentration of this hormone doubles every two days at the beginning of pregnancy. If this increase is slow, it is a sign that pregnancy does not develop in the uterus.

The form of treatment will depend mainly on the moment when the ectopic pregnancy is discovered. If the diagnosis is made in the first month of pregnancy, a methotrexate injection it causes the pregnant woman’s body to reabsorb the embryo, interrupting its development and avoiding any risk to the woman. In very rare cases, there is the possibility of transplant the embryo into the uterus. This technique is risky and has only been successful on two occasions in all medicine.

In more advanced cases of pregnancy, when there is rupture of the tubes and internal bleeding, an emergency surgery must be done, as the woman’s life is at risk. The laparoscopic procedure consists of horn removal, which in the future reduces the risks of another ectopic pregnancy but also decreases the woman’s fertility. Less severe conditions can lead to simpler surgery, which removes the embryo without making the tube unviable.