Easy and good!Recipe / how to make squid and taro simmered 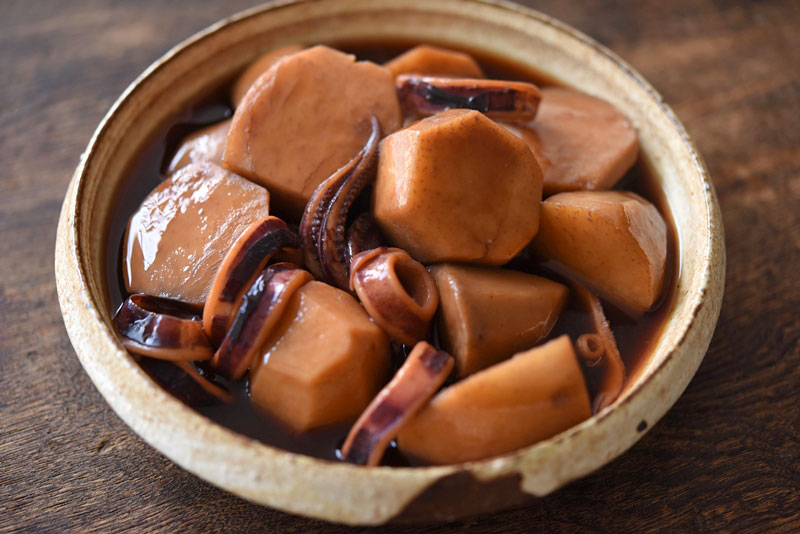 Do not boil the taro, do not take out the squid in the middle,Let the surface of the taro absorb the deliciousness that exudes when the squid is slowly boiled.I will make it like this.

The umami that comes out of the ingredients is enough, so you don’t need soup stock. It may be the easiest and most delicious simmered dish.
[Estimated storage: refrigerate for about 3 days]

Keywords for this recipe
The squid
taro
Bento
Fish dish

How to make squid and taro simmered

Preparation of taro and squid

You can buy squid cut into cylinders, but if you want to handle it yourself, please refer to “How to handle squid”.

Thoroughly wash the inside of the torso, drain it, and cut it into 1 cm wide pieces (including the emperor part). Also, cut off the tips of the two long legs so that they are aligned with the short legs, rub them with salt to remove the suction cups, and then cut them into 2 to 3 pieces.

After washing the taro and removing the soil, peel it as thinly as possible according to the shape of the taro without trying to force it into shape. * Details are also summarized in “Simmered taro”.

When simmering taro, I made it simmered with the shape of taro as much as possible, but when simmering it, it’s ratherDivide the large taro into 2 or 3 equal parts so that the taste is easy to stain.I think it would be nice to have the same size with the same feeling.

Recipe / how to make squid and taro simmered

First,Add all the seasonings from A to the pan before heating... Mix lightly to dissolve the seasoning, then add the taro.

Add the taro and put it on medium heat.When the broth is boiling, add all the squid (the point is to simmer the squid from the beginning!)

After adding the squid, lightly loosen it with chopsticks and scoop it up as the lye comes out.

* There are recipes for adding squid in hot water or taking it out during boiling, but by slowly boiling it with taro.You can make delicious simmered dishes without using soup stock... Also, if you simmer the squid for 20 to 30 minutes, the fibers of the squid will loosen and the texture will be soft.

After removing the lye, remove the lid and reduce the heat. Keep the heat so that the broth will simmer.About 15 minutesto boil.

After boiling for 15 minutes, remove the otoshi buta and boil down the broth.Keeping the heat as it is,About 5 to 10 minutes with the feeling of boiling the broth a littleto boil.

* I took the lye at the beginning, but if the lye is still floating in the broth at this stage, it is recommended to scoop it lightly.

The amount of boiled down directly leads to the strength of the taste, so I think it’s a good idea to try tasting at the end and stop at the desired amount.

Completed by serving the broth together in a bowl while hot. It’s delicious even when it’s cold, and the ones that are more flavored the next day or later are also delicious.