Don’t be afraid to ride a four-cylinder for the first time! The stationmaster first-person teaches you to start and brake quickly! ｜First-person riding teaching ep.1

Hello everyone, I’m Yang Bin, Moto7 webmaster! Today is the driving training class again! Then I believe you have seen a lot of station masters teaching Yaya to ride a bicycle, but today the topic is quite different. The station master wants to teach everyone how to quickly adapt to a four-cylinder car.

I believe everyone must have such experience. You may start riding with some relatively small displacement cars. You may have ridden from light-duty cars to 3, 400c.c., R3, Shinobi 4, but when you first encounter this type of public upgrade, it includes 600c.c. and even 1000c.c. cars. At the time, this is your cover. For a four-cylinder car, its horsepower is greater, and its engine is also wider and heavier, so it is less agile and agile when turning. So when turning, many friends may encounter some problems. You have ridden light-duty cars, but four-cylinder cars are actually a whole new field.

In other words, in terms of our power control, the four-cylinder’s low rotation is relatively weak and the torque is relatively small, but at high rotation, when its entire torque rushes out, ah~~ You don’t know what to do. Take care, so today we will start with how to drive a four-cylinder car to talk to everyone, the stationmaster next to the station is Honda HONDA CB650R, today we will use it for practical teaching, ok! Let’s get started right away! The one next to the stationmaster is Honda HONDA’s CB650R. Today I will use it for practical teaching.

First of all, before getting on the bus, of course you will do a basic inspection of the vehicle. The station master will not say much here. But at least let’s take a look at the levers, brake pedals, and gear levers. You have to do a quick check, or wait for a while to get on the bike and start riding. This is where the problem occurs.

How to get on the bus?

Next, when getting in the car, the seat of a car with a larger displacement usually follows the ground higher, especially the rear seat will be higher, so if you get in the car, when you step over with your right foot, remember to Stretch out, or you will kick your back seat quickly, or if it’s a sports car, you might kick your car shell. After getting up, right the car upright. In the riding position, we usually sit in the center of the chair when viewed from the side. Don’t sit too far in front or too far behind. It seems that we are going to lie down on the car. The central location given to you by the factory design. When you step on your right foot in the car, remember to stretch it out, otherwise you will kick your back seat, or if it is a sports car, you may kick your car shell. How to grasp the accelerator, brake and clutch?

After getting in the car and finding your own seat, let’s check the operation of the hand first. In the case of the right hand, you will have the throttle operation and the front brake. On the throttle, let’s get a feel for it. Is the clearance enough? If there is no gap, it means that maybe the entire engine speed will rush upward after you start, so there must be a gap in the throttle. Let’s try the feel of the brake lever. The brake lever will have a gap in the front part. You can feel that when you pull in a little bit, it starts to have resistance. When you pull it hard, it is the whole brake. The place where the strength began to gush out. Let me explain to you that if we usually pull the brakes by hand, some people will put their hands on the outside to pull the brakes. But if we look at it from the point of view of the station master, if you hold it too outside, in fact your The hand has left the position it was designed for you. So the position of the handle is basically holding it, and then the position of your brake lever, which can be adjusted through the position of the entire master cylinder. There will also be gaps in the brakes, so you must adapt to the differences of each car. The grip is too outside. In fact, your hand has left the position it was designed for you, and the operation will be more difficult.

Generally speaking, if you really don’t have enough strength to pull to the outside, you will put your hands on the outside. In the habit of the station master, I am accustomed to using two fingers to brake, because your finger strength needs to be trained. As long as the finger force is sufficient, it will actually have sufficient braking force when held in a normal position. In addition, there is a way to brake with four fingers. In this case, the power you can exert is even greater. Obviously, your braking will be easier and more powerful. Some people will use the back three fingers to brake. He uses his index finger and thumb to buckle the grip, and then uses the back three fingers to brake. The advantage is yours. The moment arm will also be lengthened. 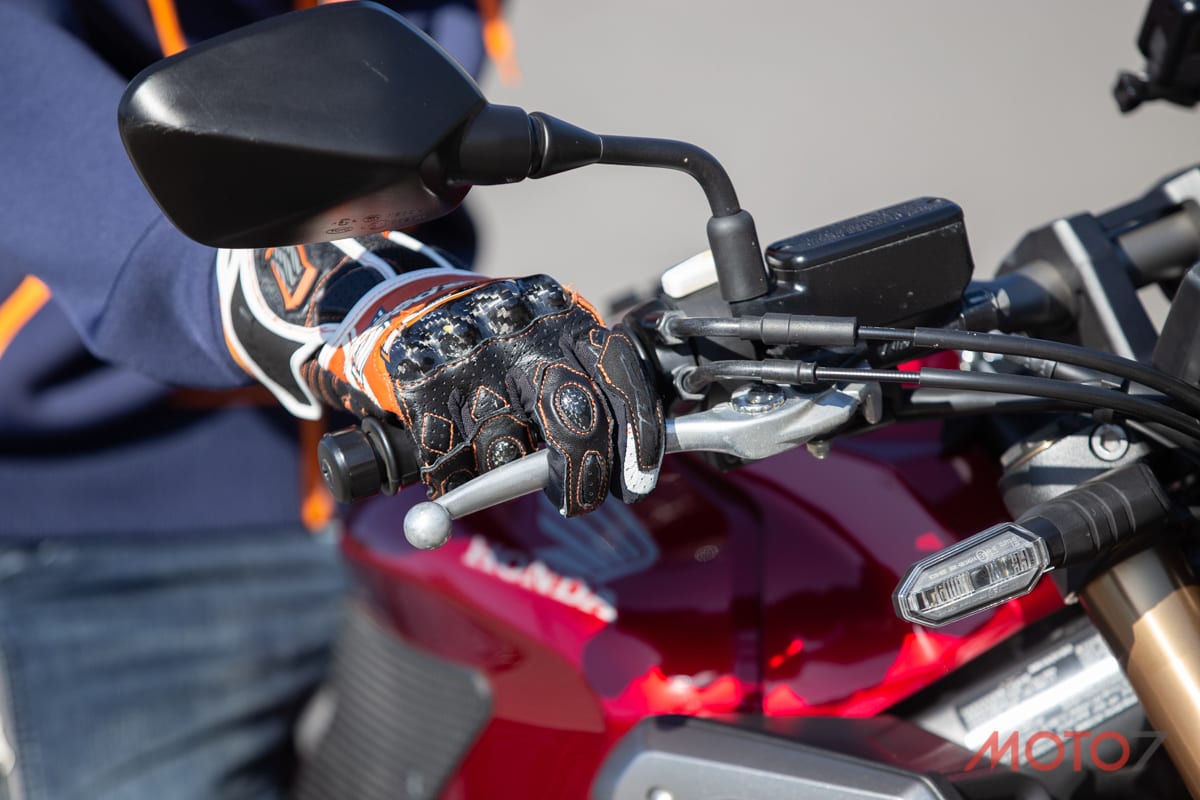 The station master’s own habit is to brake with two fingers. Braking with four fingers, the power you can exert is even greater. Use your index finger and thumb to buckle the grip, and then use the back three fingers to brake. The advantage is that your moment arm will also lengthen.

Next, the part of the brake lever can actually adjust a gap, like this one is adjustable. If you say that your hand is larger, and hopefully it is more outside, then reduce this number, and it will be more outside. For the webmaster, my hand is a bit smaller among the boys, so like me, I think it’s better to set it at 4 at present. It’s a more suitable position, and I can catch it soon and apply force. 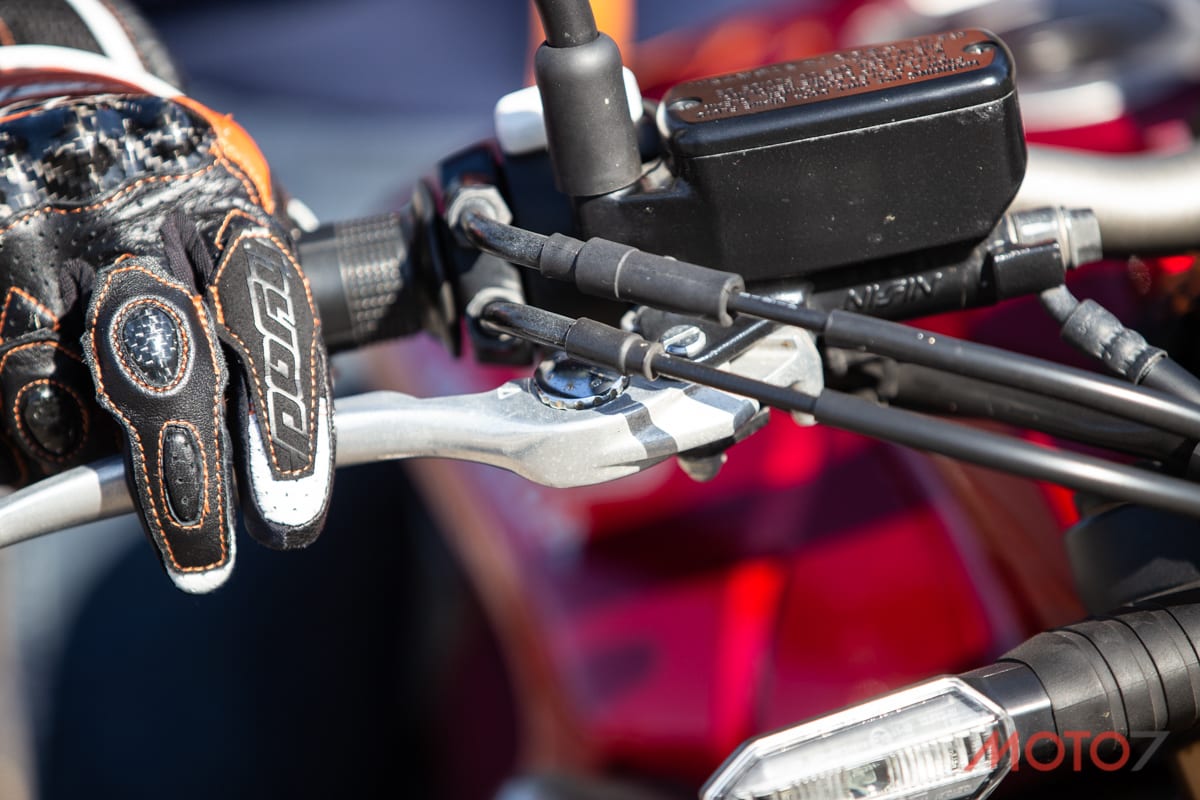 Remember to adjust the adjustable lever to the size of your palm, so it’s more convenient when riding.

Next, we see that the left hand part is the clutch. In terms of clutch, the webmaster also recommends that you use two fingers to operate it. First of all, when checking, feel the gap of the clutch. Press lightly to feel that there is a gap. Press it down and then pull it, which is the actual clutch travel. There will be a gap on the brake or the clutch. You have to feel it first. Pull the gap of the clutch and then pull again. This is the actual stroke of the clutch. Generally speaking, if it is a more labor-saving clutch , Its practical two fingers are enough. Of course, if you are riding a long distance and some people are tired, then you can change your fingers to pull, and it is not impossible to use the back three fingers. But I would suggest that it is better to use the first two fingers to catch. The left-hand clutch can also be pulled with two fingers.

How to put the left and right feet?

In addition, let’s take a look at the operation of the foot brake. In terms of feet, we step on the pedal normally, then we put the front edge of the boot and the front part of the foot on the brake, and when we need to brake, we step on it again. If you say that when you don’t want to brake, we try to practice to separate it in the middle, so that we won’t keep on braking. In addition, if we are riding on the track, some people will put their feet a little behind and put them back when they need to brake. But in terms of roads, you may need to brake at any time, so basically Put your feet in the prepared position, that is, step on the pedals. Place the front of your feet above the brakes. At the same time, you must maintain a gap here. You can step on it as soon as you need it. That is, we may need it at any time on the road. brakes. If we are generally on the road, and if you step on the seat too far behind, then in an emergency, you have to step on the front first. There will be a time difference, and there may be a slippage of your foot. Stepped on the brakes. 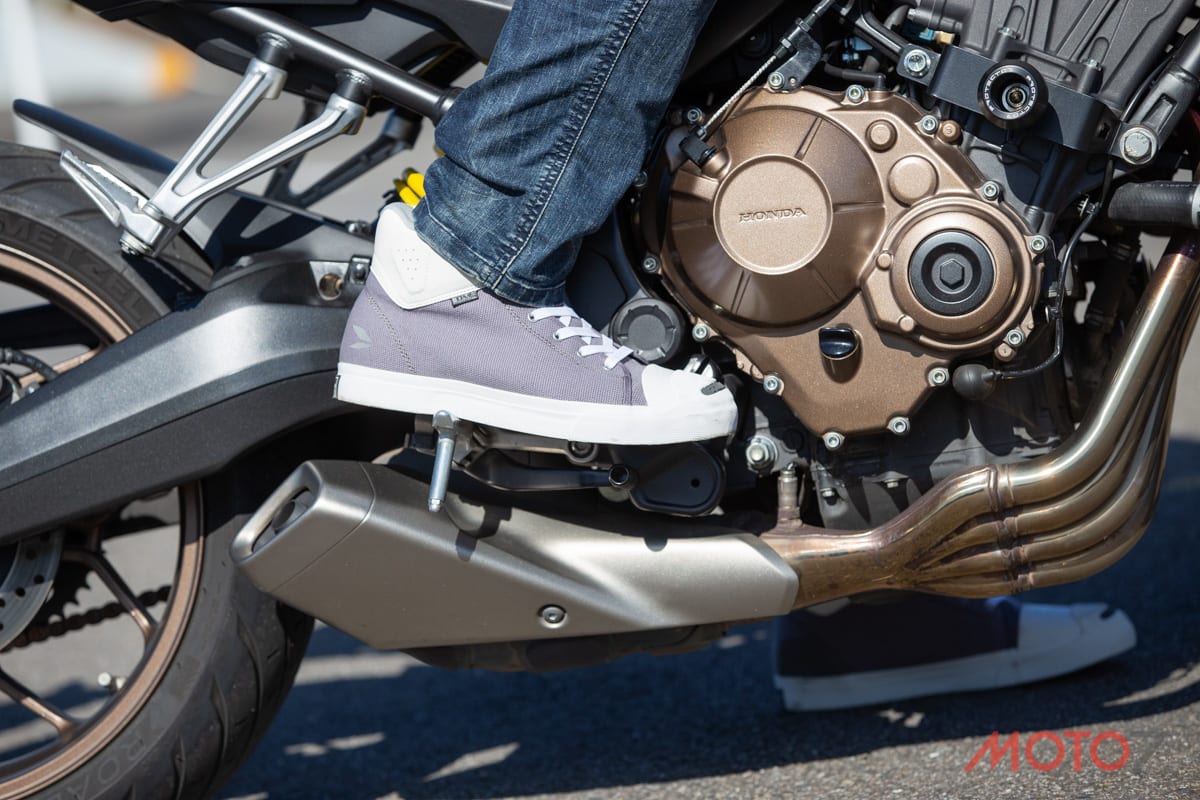 Place the arch of your foot on the pedals, keeping a little clearance with the brake.

Let’s take a look at the other side of the gear position. In terms of the position of the gear lever, we also step on the foot normally, that is, the part of our foot is stepped on the pedal. Then when you are shifting, you need to hook up or down, and you can do the operation very flexibly. Next is the position of the left foot, which is probably the rear end of the sole of the foot on the pedal. Generally speaking, we will place the foot above the gear lever. If you need to go down to move into gear when you need to move into gear, you usually put it on it, and step on it when you move out. The left foot is also in the same position. Just extend the hook when you need to shift up.

How to drive a four-cylinder car after it is started? Please see the next page.