The latest model “AQUOS sense 4” of Sharp’s popular smartphone “AQUOS sense” series has appeared. It is a high-cost model with processing performance that is more than twice as high as the previous model while maintaining the functionality that is easy to use, and quickly won the first place in the popularity ranking (as of November 25, 2020) at Kakaku.com. ing. 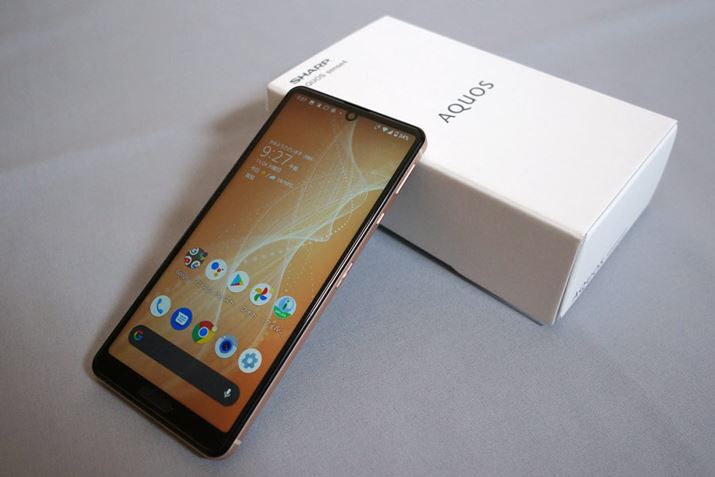 * Prices in this article are standardized including tax. 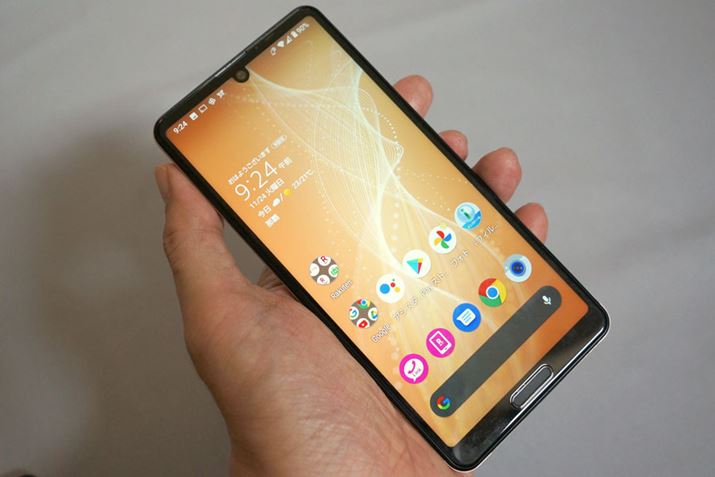 The body is slightly larger, but the impression when I pick it up remains the same.Sharp’s original IGZO liquid crystal will continue to be used for the display

In addition, the FeliCa port will continue to be installed, but it has been strengthened so that “Mobile Suica” and “Mobile PASMO” can be used together (as of November 19, 2020, SH-41A and A003SH have been confirmed to work). 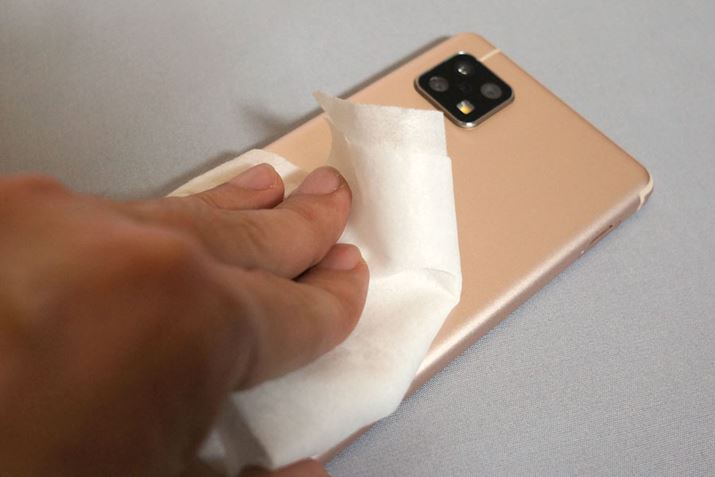 In addition to waterproof, dustproof and toughness performance, a body that can be wiped with a disinfectant sheet containing alcohol

New features include a “Pay trigger” that allows you to launch an electronic payment app by pressing and holding the power button or fingerprint sensor, and a launch button for the voice assistant “Google Assistant.” In addition, in response to the significant improvement in basic performance, the “gaming settings” that were installed in higher-end models such as the higher-end series “AQUOS R 5G” have also been installed in this machine. 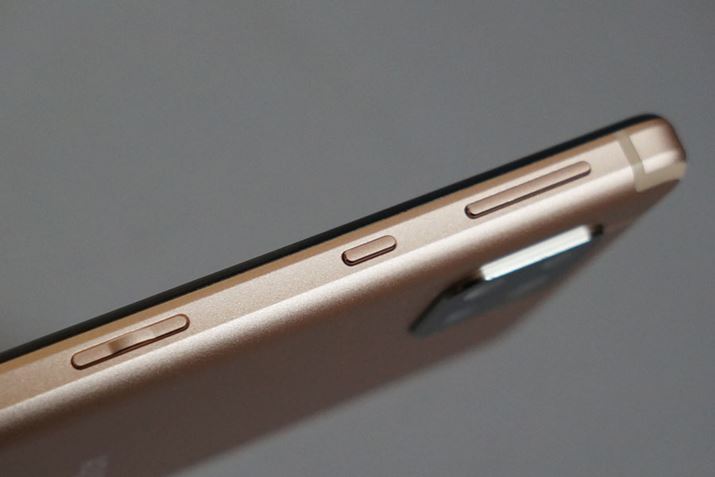 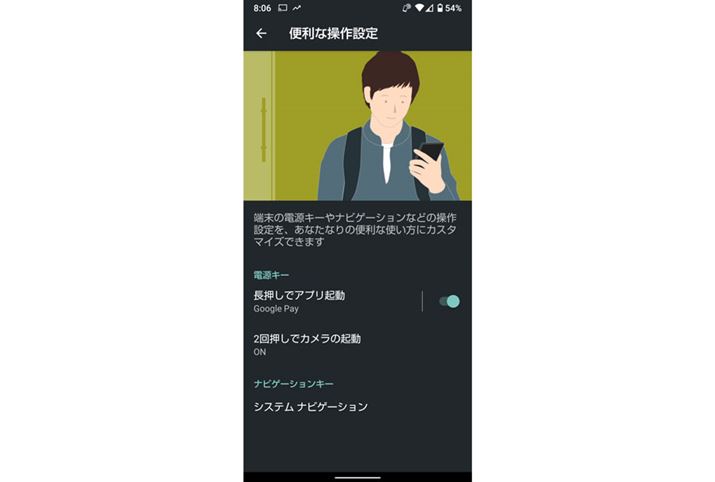 Press and hold the power button to activate “Pay Trigger”. You can also assign the camera activation by pressing twice 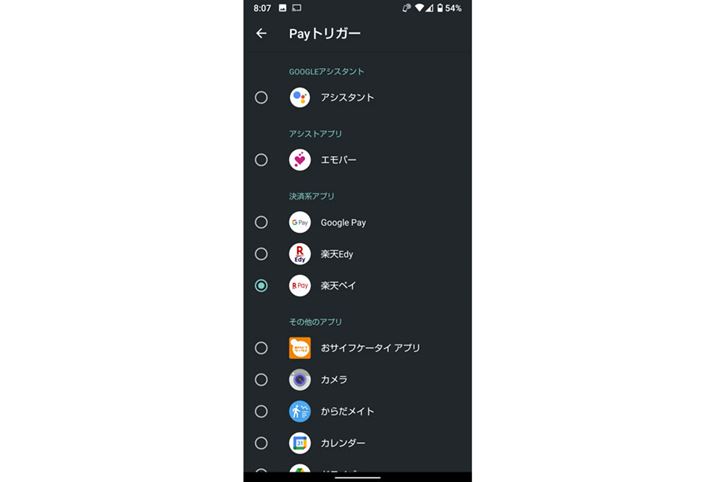 Pay triggers are not limited to electronic payment apps, but can also be assigned to launch cameras and various apps.

Equipped with the “gaming settings” that were installed in the high-end models “AQUOS zero” series and “AQUOS R 5G”.In addition to environment settings that allow you to concentrate on the game, such as restrictions on notification touch operations, you can also perform screen recording, search for capture information, etc. 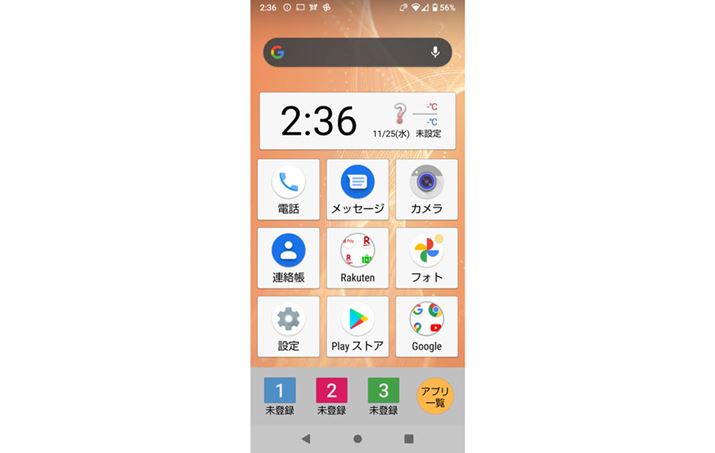 In addition to the normal home screen, “AQUOS Easy Home” is also available

High basic performance that “Genshin” operates at a practical level while being in the 30,000 yen range

The basic specifications are the same for both the “AQUOS sense 4” and “AQUOS sense 4 lite”. The SoC “Snapdragon 720G” for the middle range is combined with 4GB of memory, 64GB of storage, and a microSDXC memory card slot that supports up to 1TB. The OS is Android 10. As with the previous model, it guarantees up to two OS version upgrades for two years after its release, and the latest software environment can be used up to the Android 12 generation. 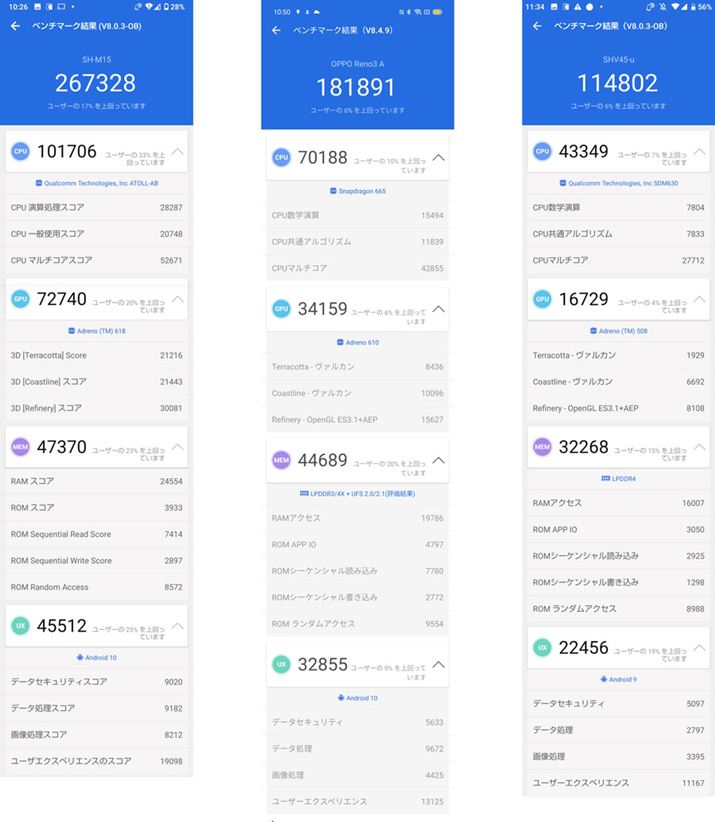 The recommended spec is “Genshin” which is “Snapdragon 845” or higher, but this machine can be played without problems if the image quality setting is suppressed to “Medium” or lower.

The load status on the device when the image quality setting is set to “Medium” in Genshin (orange bar at the top right of the screen).It’s a considerable load, but not enough to exceed the hardware limits

Communication functions that differ depending on the model, such as DSDV and eSIM support

As mentioned at the beginning, there are various variation models of “AQUOS sense 4”, and there are big differences especially in communication functions. The NTT DoCoMo version “SH-41A” and the Ymobile version “A003SH” are basically single SIM versions with SIM lock, but the “SH-M15” for general distribution has two nanoSIM card slots. DSDV (Dual SIM Dual VoLTE) compatible model. On the other hand, “SH-RM15” for Rakuten Mobile is a DSDV with one eSIM and one nanoSIM card slot. The “SH-M15” and “SH-RM15” are compatible with NTT DoCoMo, au, Ymobile (Softbank), and Rakuten Mobile’s VoLTE. 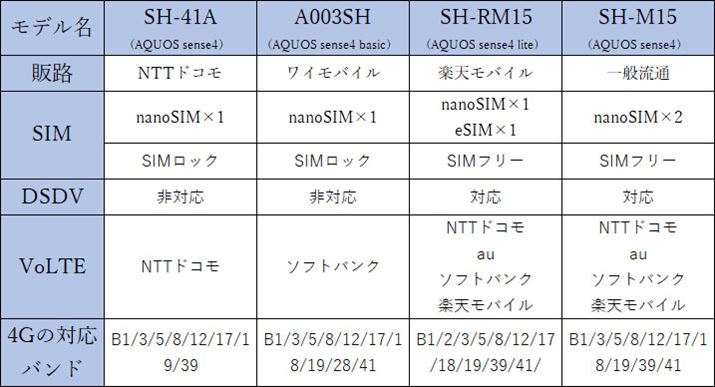 “SH-M15” and “SH-RM15” have many compatible bands, and many SIM cards distributed in Japan can be used, such as supporting VoLTE of 4 carriers. Also, since it is a DSDV, it seems good to use the SIM card of a communication carrier with cheap voice calls and the SIM card of MVNO with cheap data communication together. The eSIM provided in the “SH-RM15” is an electronic version of the SIM card information, which can be downloaded and used via Wi-Fi. It is to have issued a status quo eSIM in the country, but just Rakuten mobile and IIJmio, KDDI also from subsidiaries “KDDI Digital Life”, plans to start a service to the prospect of the next spring. The country is also supporting eSIM, and it is expected that there will be more options in the future.

One of the reasons why the “AQUOS sense” series has gained a lot of support from users is the longevity of the battery. As mentioned earlier, this unit has a built-in battery of 4,750mAh, which is 570mAh more than the previous model. In addition, due to the effect of IGZO liquid crystal, which consumes less power, manufacturers are appealing for a week of battery life. Looking at the spec table, the continuous standby time (LTE) is about 1,020 hours, the continuous talk time (LTE) is about 63.3 hours, and the continuous standby time (LTE) of “AQUOS sense 3” is about 910 hours, continuous talk time. (LTE) It has improved significantly from 48.8 hours. This verification was conducted for about 4 days, but after using it for about 3 hours a day (including 1 hour 3D game), the battery lasted for 3 days + α (less than 80 hours) from full charge. It would have been longer if I hadn’t played the game. If you use it for about an hour a day, it seems that the battery will last for about a week. In addition, it also supports the high-speed charging function “USB PD (18W)”, and can be fully charged in a minimum of 150 minutes. The “SH-M15” for general distribution also includes a USB PD quick charger that supports 18W. 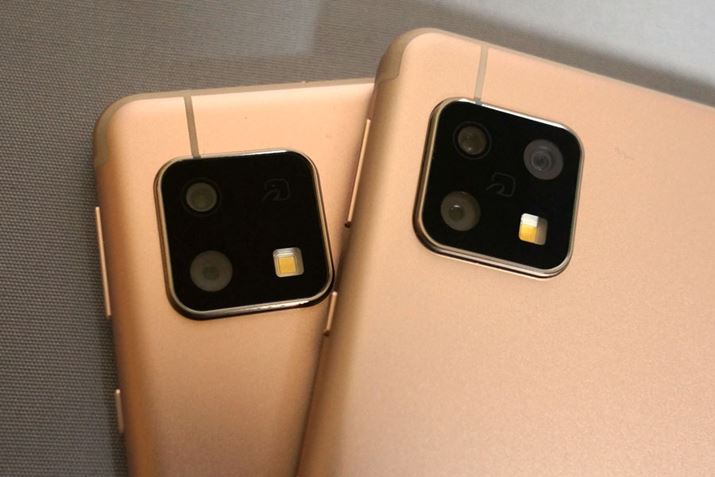 Below is an example of a still image using the main camera of “AQUOS sense 4”. Shooting is done in the default “AI Auto” mode.

Taken with a wide-angle camera 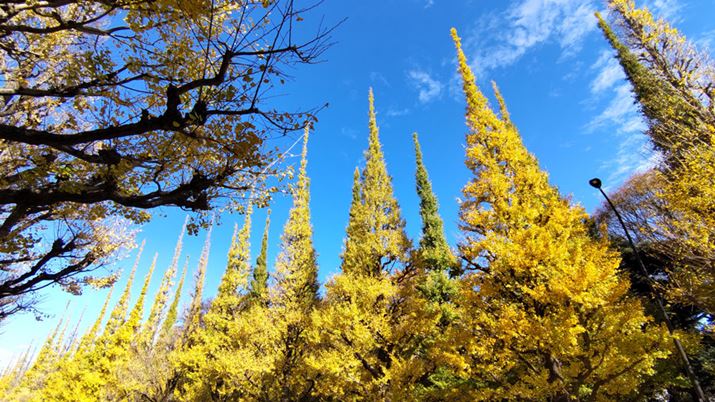 Photographed a row of ginkgo trees during the day. The yellow leaves of ginkgo and the blue sky are quite vivid, but there is no big difference from the impression with the naked eye.The surrounding area is a little rough 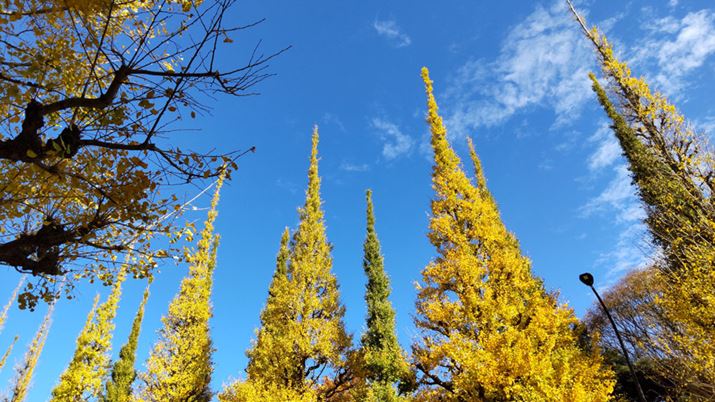 Switch the same scene as above to the standard camera and shoot. The details of the leaves are well reproduced.Also, there is little difference in color tone due to switching cameras.

Taken with a telephoto camera 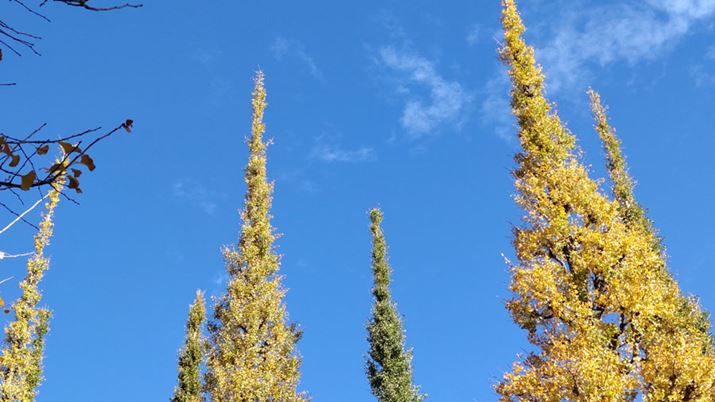 Switch the same scene as above to the telephoto camera and shoot. The tone is consistent even when switching cameras.In addition, I focused on the ginkgo tree on the left side of the center, but it seems that it is in focus on the sky in the background. 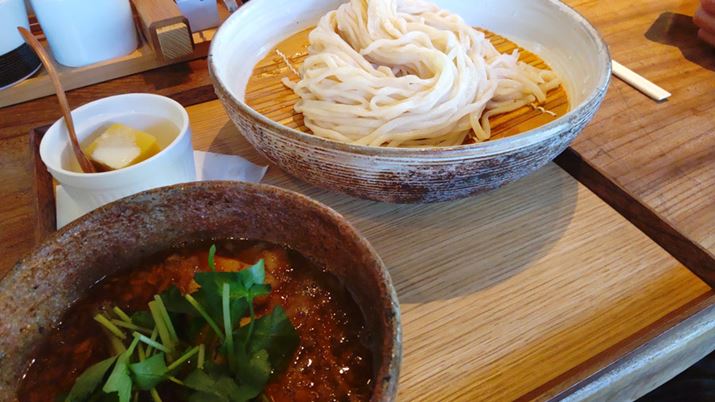 Taken with a standard camera.The texture of the wood grain of the bowl and table is well reproduced, and no color cast can be seen. 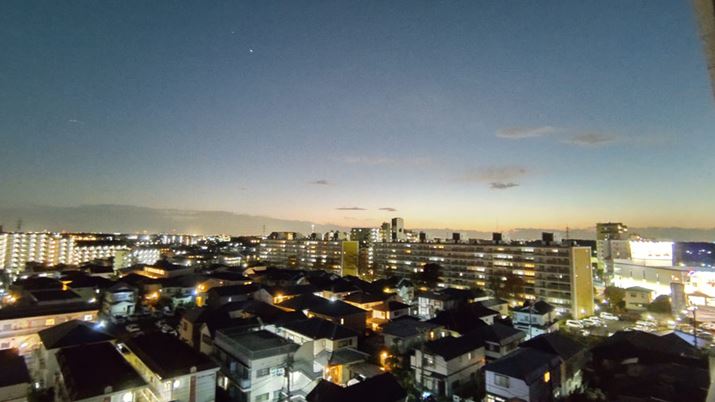 Take a picture of the city at dusk. Hand-held shooting and long-exposure camera shake are suppressed, but color noise is generally noticeable.The details of the building are not very clear 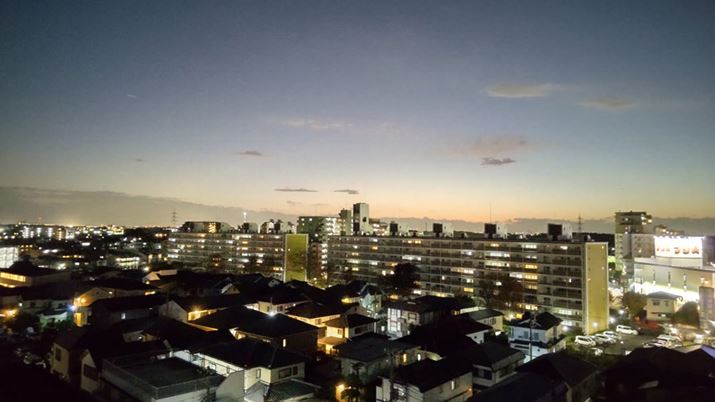 Taken with a standard camera.It has much less noise than wide-angle and telephoto cameras, and the details are relatively clear, resulting in the clearest finish.

Taken with a telephoto camera 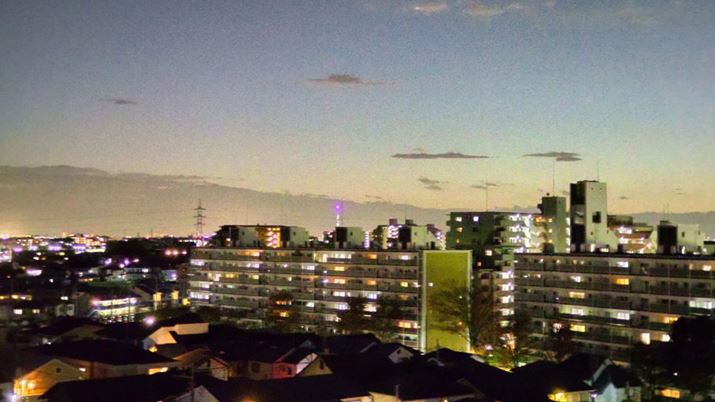 Switch the same scene as above to the telephoto camera and shoot. In addition to the color noise, some of the distant view lighting has turned purple.However, camera shake is relatively suppressed.

Compared to the previous model “AQUOS sense3”, the main camera of this unit has improved response in general, and the image quality of the standard camera in particular has improved considerably.On the other hand, the telephoto camera and the wide-angle camera, which is omitted in “AQUOS sense3 lite”, are a little weak for shooting in the dark, and there is a tendency for noise and color cast to appear.

If you can buy a smartphone for the 30,000 yen range, the best choice at the moment

Looking for products with FeliCa and waterproof and dustproof bodies in the same price range, OPPO Reno3 A is popular, but this machine has the advantage of being a tough body as well as having high basic specifications. As a product equipped with the same SoC as this machine, there is Xiaomi “Redmi Note 9S” that can be purchased for the first half of 20,000 yen, but this is not equipped with FeliCa. As a smartphone that can be bought for the 30,000 yen range, this unit can be said to be the best choice at present.

FB’s friends are four hikikomori digital monowriters. The virtual feat is fuckless, which makes heavy use of erroneous conversions, and the real feat is a master level in terms of both timing and frequency due to the delay of the last train.