The Dell Latitude 7424 Rugged Extreme is truly a genuine tank. The Latitude 7424 is a rugged, water-resistant, ruggedized PC with minimal impact. However, the absolute durability above comes with a high price, the same size and weight.

High-end military laptops are in the transition phase. Genuine manufacturers and players on this market are aiming for thinner devices with more of the Rugged laptop features. As recently as the Dell Latitude 5420 Rugged that I have evaluated. However, in this article, we will come to a device with traditional nuances.

The Dell Latitude 7424 Rugged Extreme is a thick, heavy and huge device compared to a 14-inch laptop. However, the thick and heavy design helps it meet both IP65 and MIL-SPEC-810G standards. This means that the device is dust and splash resistant and can survive falling from a height around your waist.

Here are the specifications of the Dell Latitude 7424 Rugged Extreme laptop used in this review:

The body has a design suitable for military form. The chassis is made primarily of plastic and some metallic accents. The corners of the base, the screen are all covered by polycarbonate rubber that can absorb force when dropped. The device is not aesthetically pleasing, but that’s not what the manufacturer is aiming for. With Dell Latitude 7424 Rugged, you can beat every opponent without sweating.

The keyboard frame, body, and screen are completely immune to warping. The screen part may be twisted very small with intentional strong force and the frame held in place. The hinge is quite stiff, holding the screen very firmly. The screen does not shake when used, unless you use your hand to manipulate touch on the screen. Rough plastic surfaces have fingerprints and dirt, but can be cleaned easily. 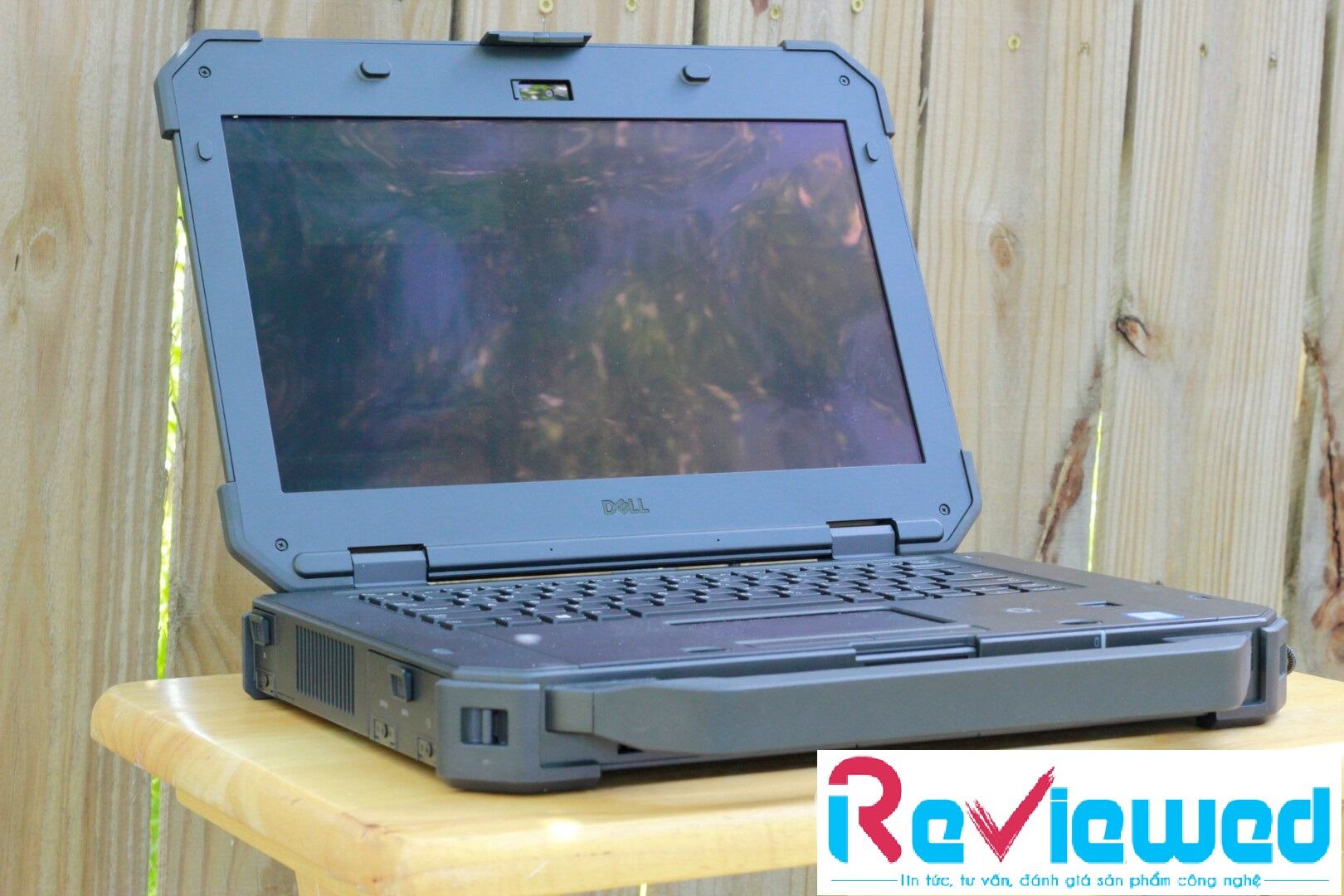 The front of the machine is a rubber-covered handle, so it looks longer than it really is. This handle can be removed. The Latitude 7424 is almost impossible to pack in pockets and backpacks. Users will need to bring the device as a briefcase to work.

The gateway system is excellent. Devices come in a variety of ports, including the most modern (3 USB A 3.0 ports, 1 USB C 3.1 gen 1 port, DisplayPort, Gigabit Ethernet). Latitude 7424 also brings some old connections such as SmartCard or Serial Port. Additionally, the PCIe storage memory and the Bluray drive are removable. Outside all ports have a dust and water resistant cover.

The ability to repair and upgrade the device is very simple. 12 Phillips screws are used to fix the lower cover. These screws are the same, so there’s no need to order them. After removing the screw, the bottom cover is opened relatively easily without much force. Inside, you can replace RAM, wifi module. To access the CPU and GPU soldered to the machine, you need to remove some accessories.

The keyboard is mounted through 6 screws and a number of plastic levers. Replacing the keyboard takes a lot of work but is relatively simple. 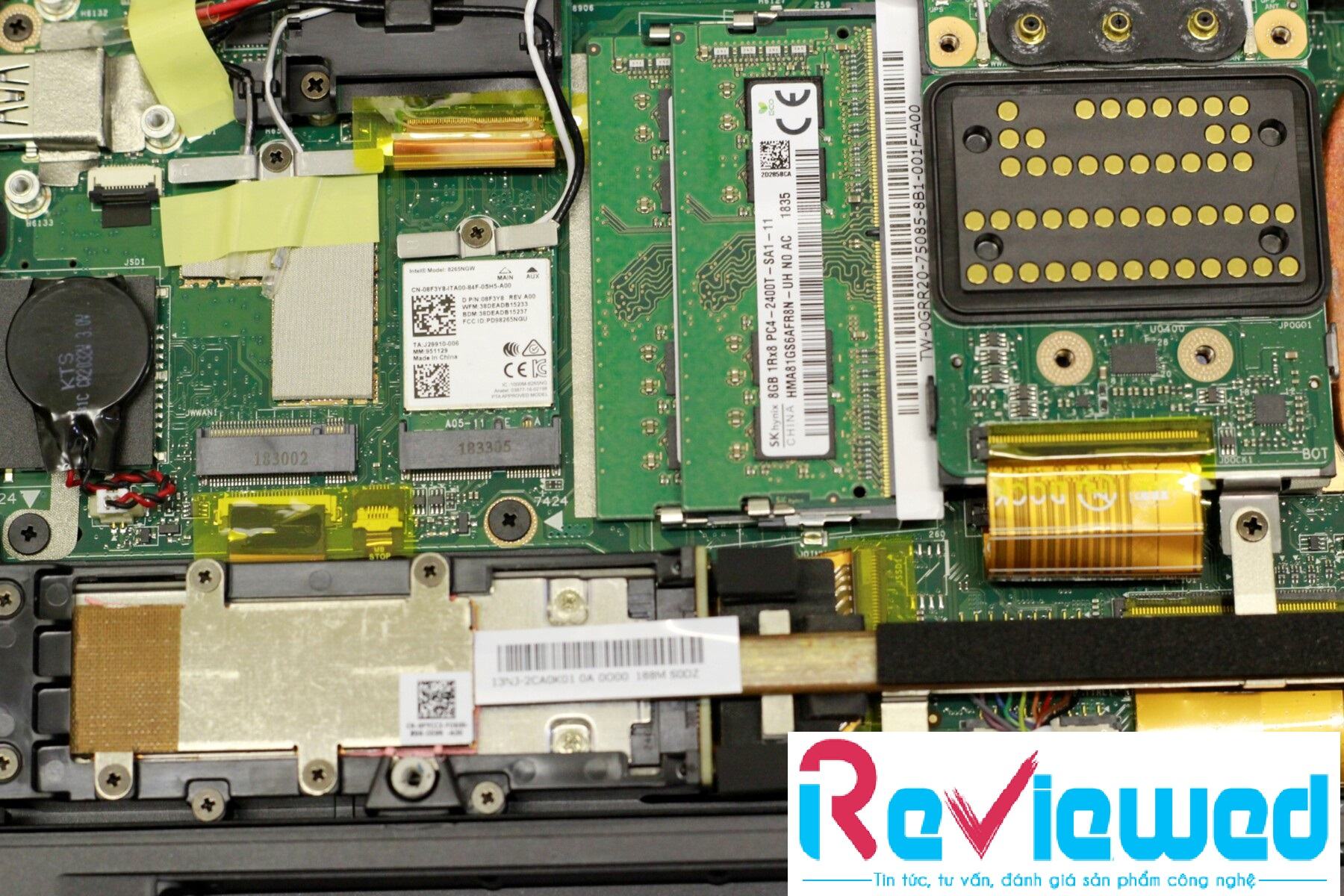 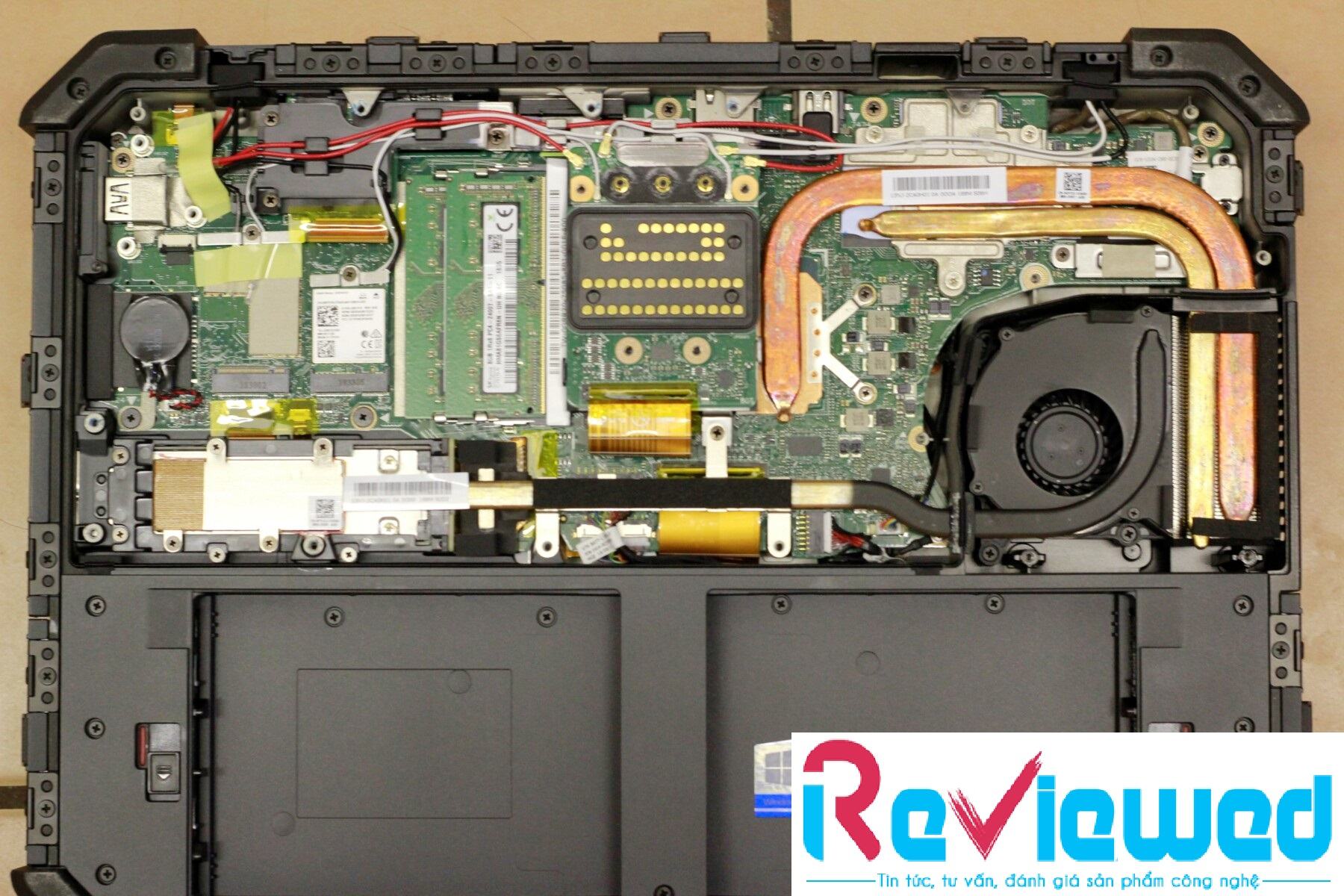 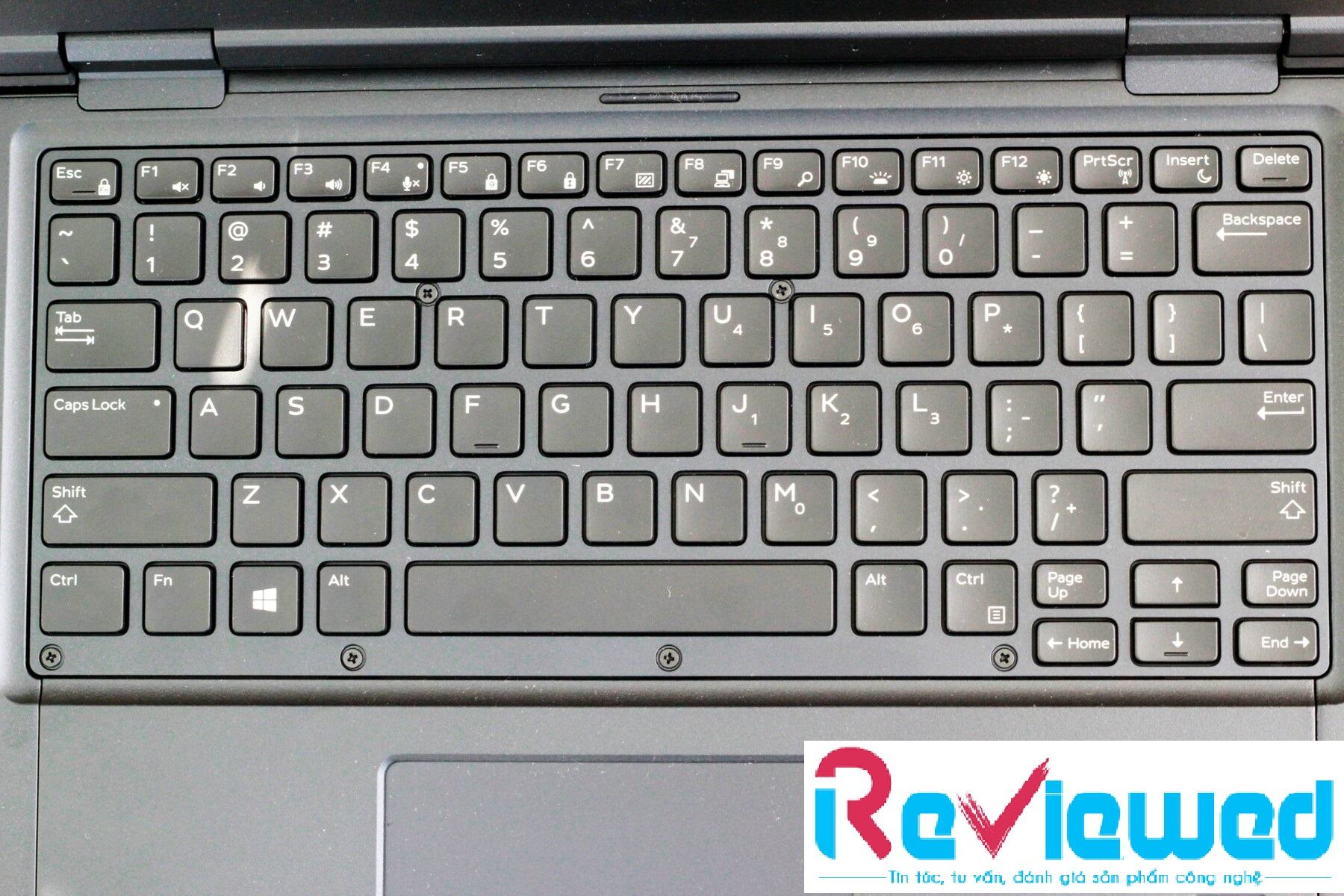 Neither the touchpad nor the touch screen is really as expected. Both have poor feedback and experience of hovering. This is because manufacturers want to use resistive touch screens to increase durability instead of capacitive touch as on other devices. With resistive touch, the device will lack the smoothness and accuracy in navigation, but conversely when wearing gloves you can still use the device.

Users need to press to apply pressure on the touchpad and screen to activate and use the touch screen, it will take some time to get used to. This mechanism makes manipulations, gestures such as drag and drop become more difficult. Overall, the resistive touch design benefits the durability of the Latitude 7424 Rugged Extreme but also provides an uncomfortable use experience. 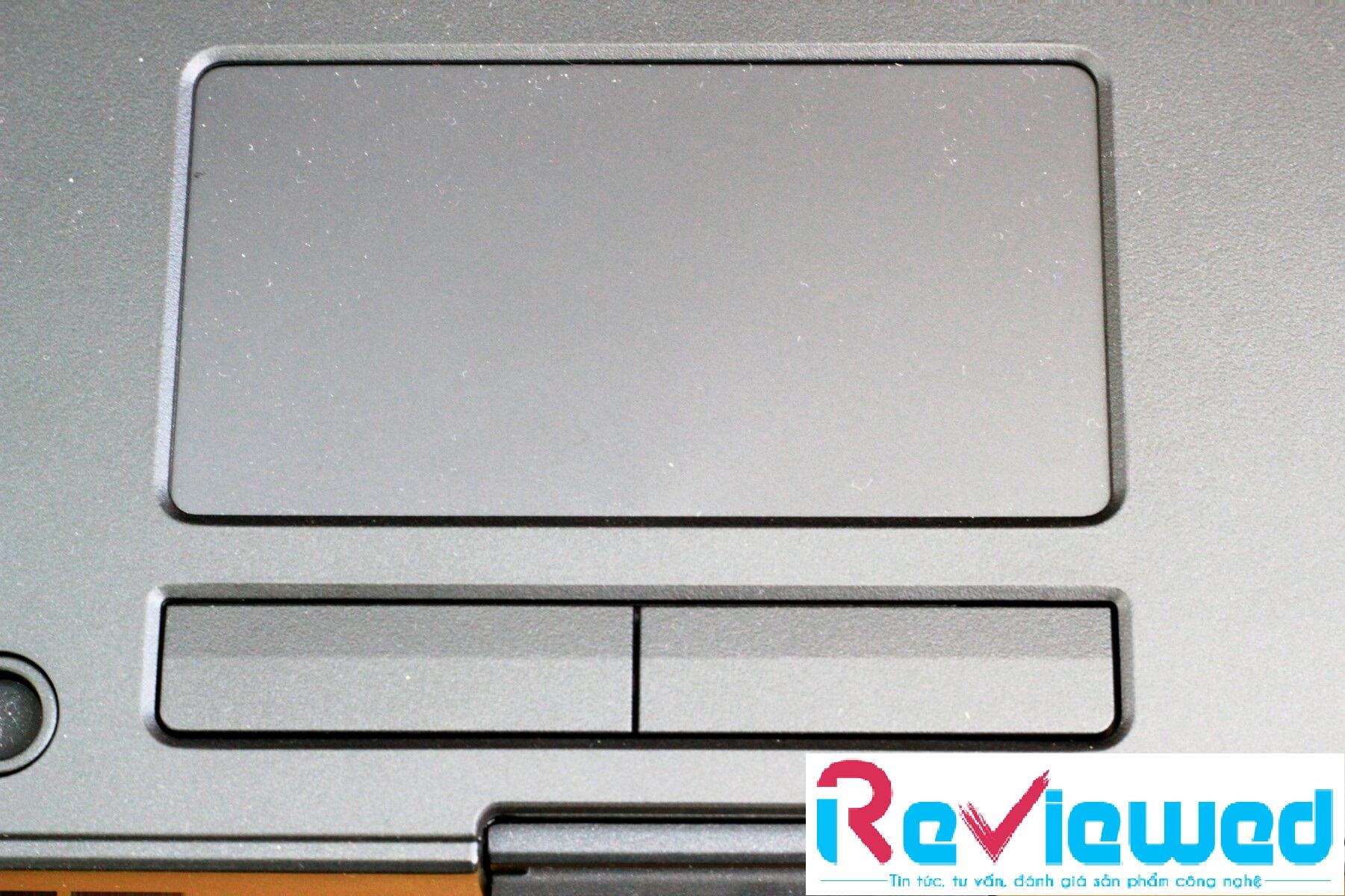 High brightness display, Latitude 7424 Rugged Extreme can be used in any light conditions. Even under direct sunlight, images and text characters are clearly displayed. Bright screen backlight does not have the phenomenon of light flow much. The backlight flares in the upper corners but not much, does not cause distraction in low light environments.

Viewing angles are ensured thanks to IPS panels. I noticed a slight change in color when viewed from a narrow angle horizontally. Especially when the brightness setting is 30% or more, it may cause distraction for some people. 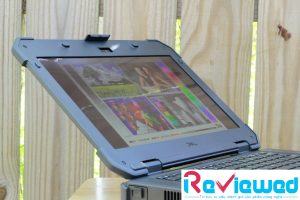 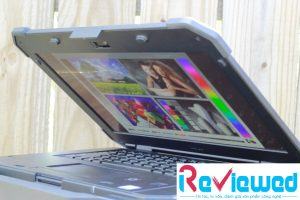 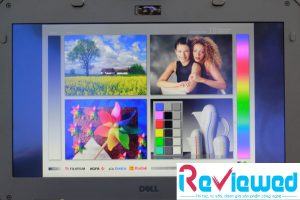 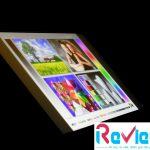 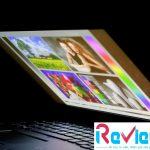 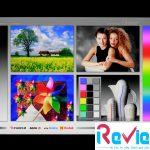 On the Latitude 5420 Rugged, I reviewed the Core i7-8650U and AMD Radeon RX540 processors. The performance of the Latitude 7424 Rugged Extreme is quite similar and has some minor drawbacks compared to its sibling. 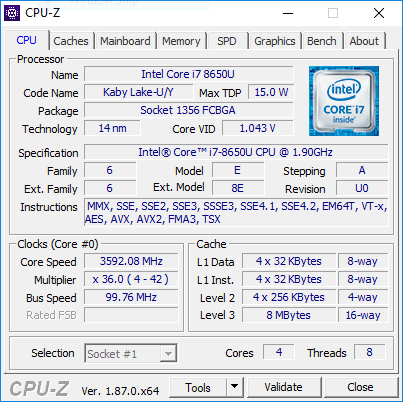 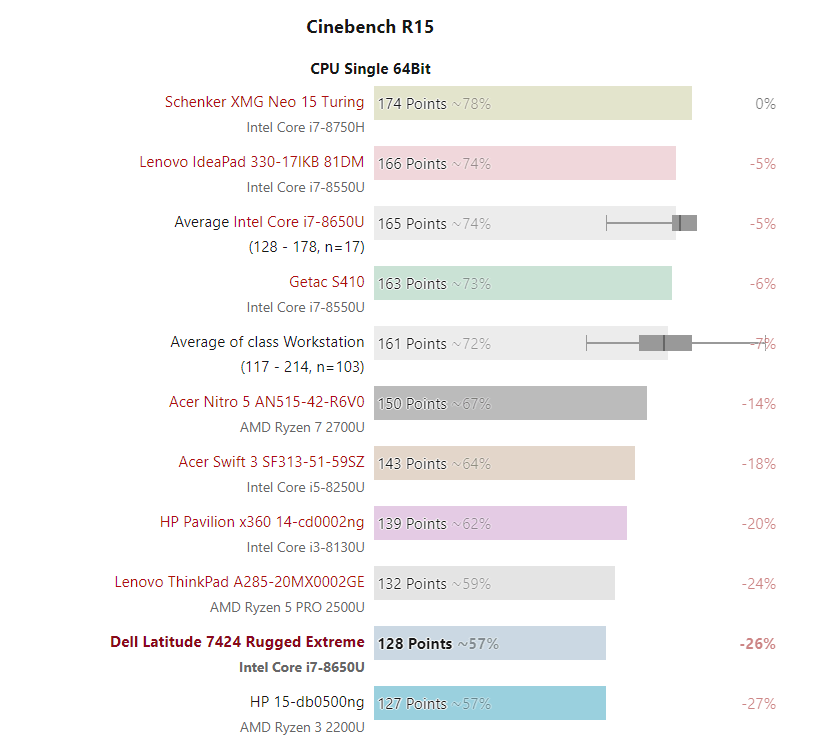 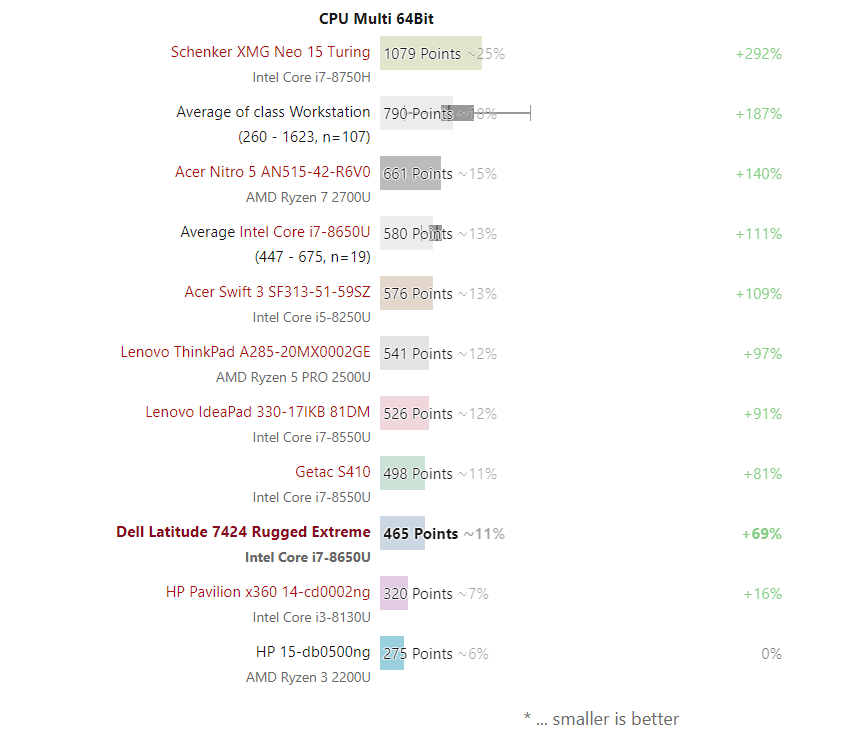 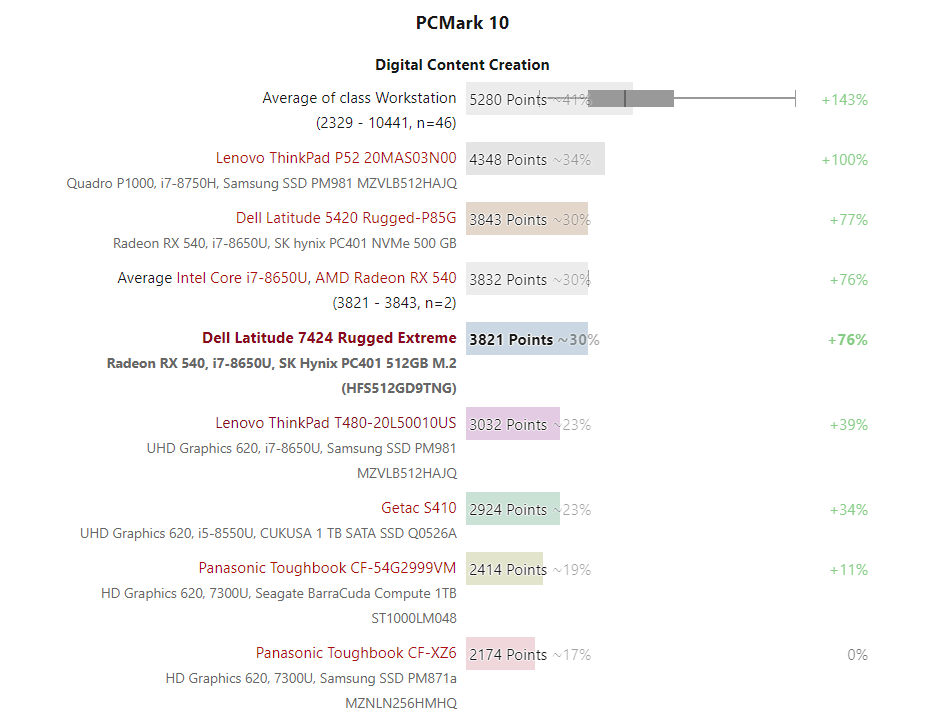 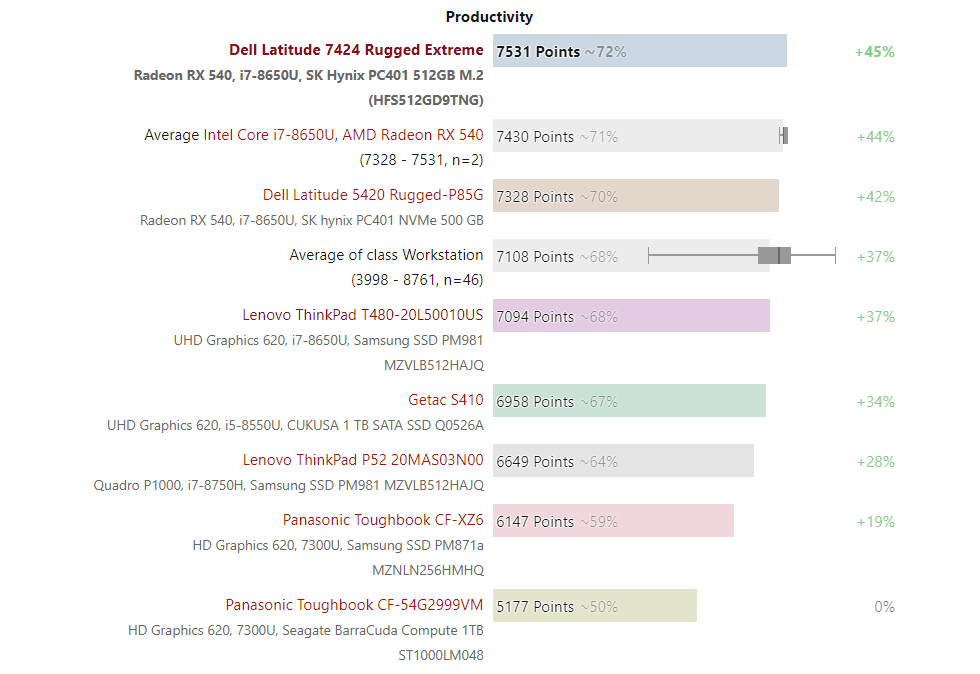 Overall performance through the marking with PCMark 10

SSD 512 GB PCIe has very fast read speed, but relatively slow write speed. Even so, the memory is fast enough for every task. It can be easily replaced by pushing into the slider on the right side of the machine.

The Radeon RX 540 is essentially AMD’s answer to the Nvidia MX150, which is a low-end graphics card designed for office tasks, low-cost laptops that need a bit of graphics performance. The RX 540 surpasses the MX150 at most benchmarks, good enough for light photo and video editing. Graphics performance is significantly reduced when using the battery. 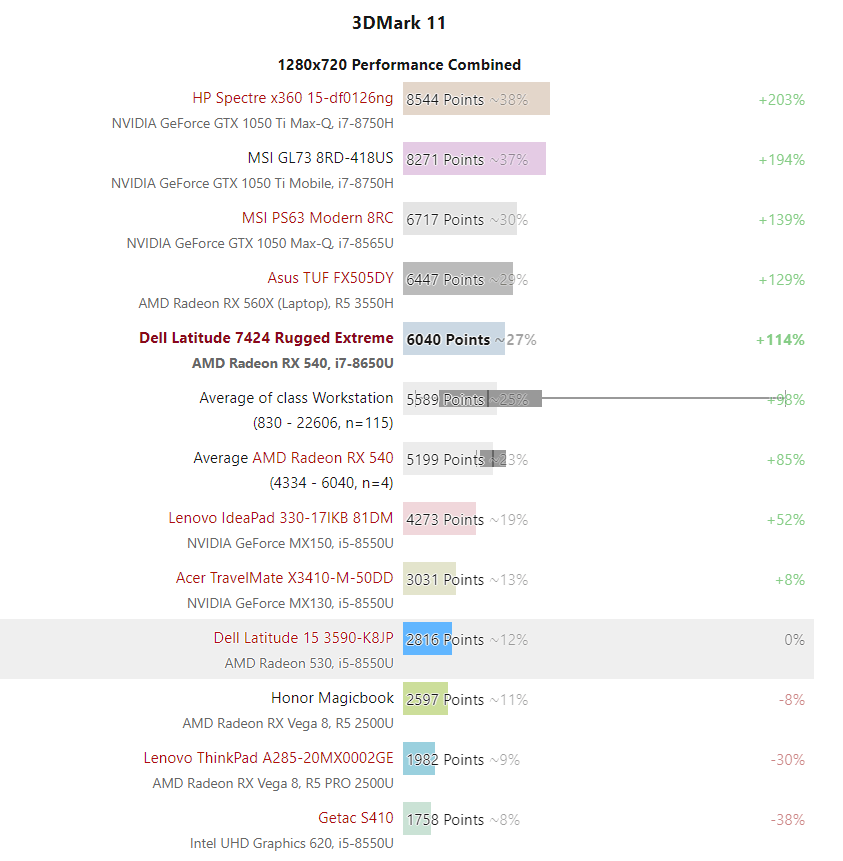 The AMD Radeon RX540 is powerful enough to run all modern games at 1366×768 resolution with Medium / High picture quality. Older games can run in FHD but need to reduce the image quality a bit. 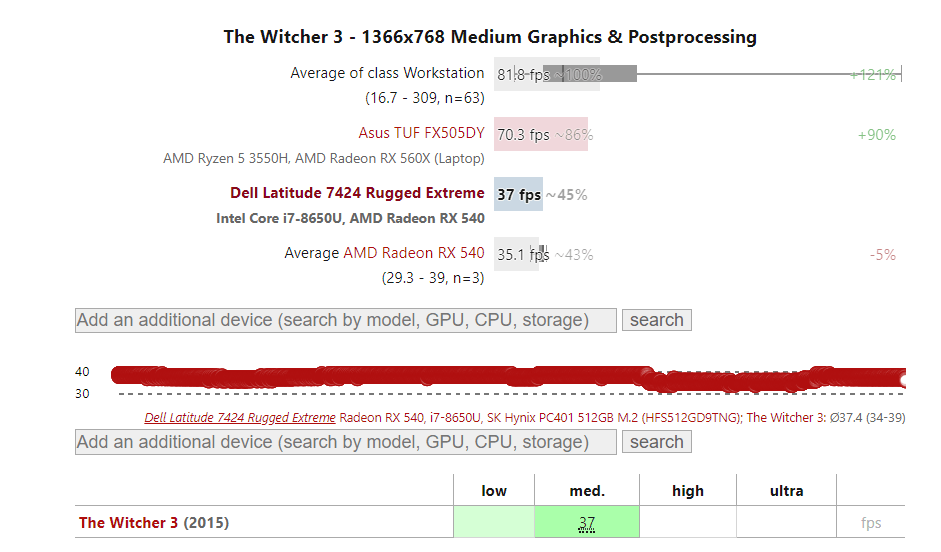 The noise level of the heat dissipation fan is equivalent to the Latitude 5420 Rugged. When idle, the system operates completely quiet. The machine also does not have small static sounds. When under load, the fan accelerates to create a noise of about 40 dB (A) for a few seconds before reducing the speed. Occasionally, the fan would accelerate for a short time, when the noise then measured was 33 dB (A).

The heat is well managed, with only a few hot spots around the radiator. The whole body remains cool at maximum load. The keyboard part is never so warm that the user feels uncomfortable.

The speaker system of the device is nothing special. The bass is lacking quite a lot, the middle and high bands are well balanced. Maximum volume up to 82 dB, retains clarity and clarity when opened at maximum. However, the Dell Latitude 7424 Rugged Extreme has the same problem with the 5420: The sound is pretty much muffled, due to its dust and water-resistant design.

Similar to its brothers, the Latitude 7424 Rugged Extreme has great battery life. Thanks to two 51 Wh batteries (total of 102 Wh), the device operates continuously for 11.5 hours. Users can feel comfortable leaving the charger at home without worry.

The Dell Latitude 7424 Rugged Extreme is a powerful laptop that offers great performance but still has better choices. Unless you need a waterproof device, dustproof and often work in harsh environments.

The Dell Latitude 7424 Rugged Extreme is a symbol of the Rugged laptop line. It is thick, heavy but extremely durable. The device is waterproof, dustproof, very suitable for harsh working environment. Strong performance, ensure handling many different tasks with good flexibility.

The most outstanding advantage of the Latitude 7424 Rugged Extreme is the superior weathering ability, gloves-fitted input. 7424 works faster and is a bit cooler than the 5420.