Dell has upgraded its 7000 series business notebooks with the new Kaby Lake Refresh processor. Along with that, Dell Latitude 7390 is equipped with smartcard reader port as well as other security options. Devices with strong points like long battery life, nice screen, connectivity and good data entry system ensure a foothold in the professional business segment.

Dell Latitude 7390 is a mid-range mobile business notebook that is higher than the popular 13-inch models and is the successor to the Latitude 7380. At the time of writing, the configuration I am using is priced. around $ 1,706, the lower configuration options start at $ 1,199. The machine is operated by Intel Core i5-8350U 4 cores, 8 GB RAM, graphics processed by Intel UHD Graphics 620, 256 GB SSD storage memory.

The device weighs 1.3 kg, the Full HD IPS screen has a resolution of 1920 x 1080 pixels. Dell Latitude 7390’s competitors include 13-inch and 14-inch thin and light machines, some of which are 2-in-1 devices. All are in the high-price segment, targeting the business people who need to move a lot. The possible opponents include:

Here are the specifications of the Dell Latitude 7390 laptop used in this review:

The chassis, completely finished in a matte black with a wedge shape facing the front edge. The design of the device gives a simple elegant feel. Besides the Dell logo, the contrasting strip of color on the lower rear edge, the power button and even the hinge are almost no visual accents. I especially like the non-slip surface of the device, a layer of rubber covering the body surface and the back of the screen. Fingerprints are still visible but not so much. On Dell’s site, the 7390 is presented with a high-quality material like magnesium alloy.

Even when applying a strong force, the chassis can only be twisted to a very limited extent with a few small cries. The screen lid is also sturdier than usual, able to withstand pressure. Opening the device with one hand is a bit difficult, but on the contrary, the screen only shakes very small when moving the machine. Dell Latitude 7930 has a maximum screen opening angle of 180 º, from an opening angle of approximately 135 º or higher, the body is raised by the lower edge of the screen. 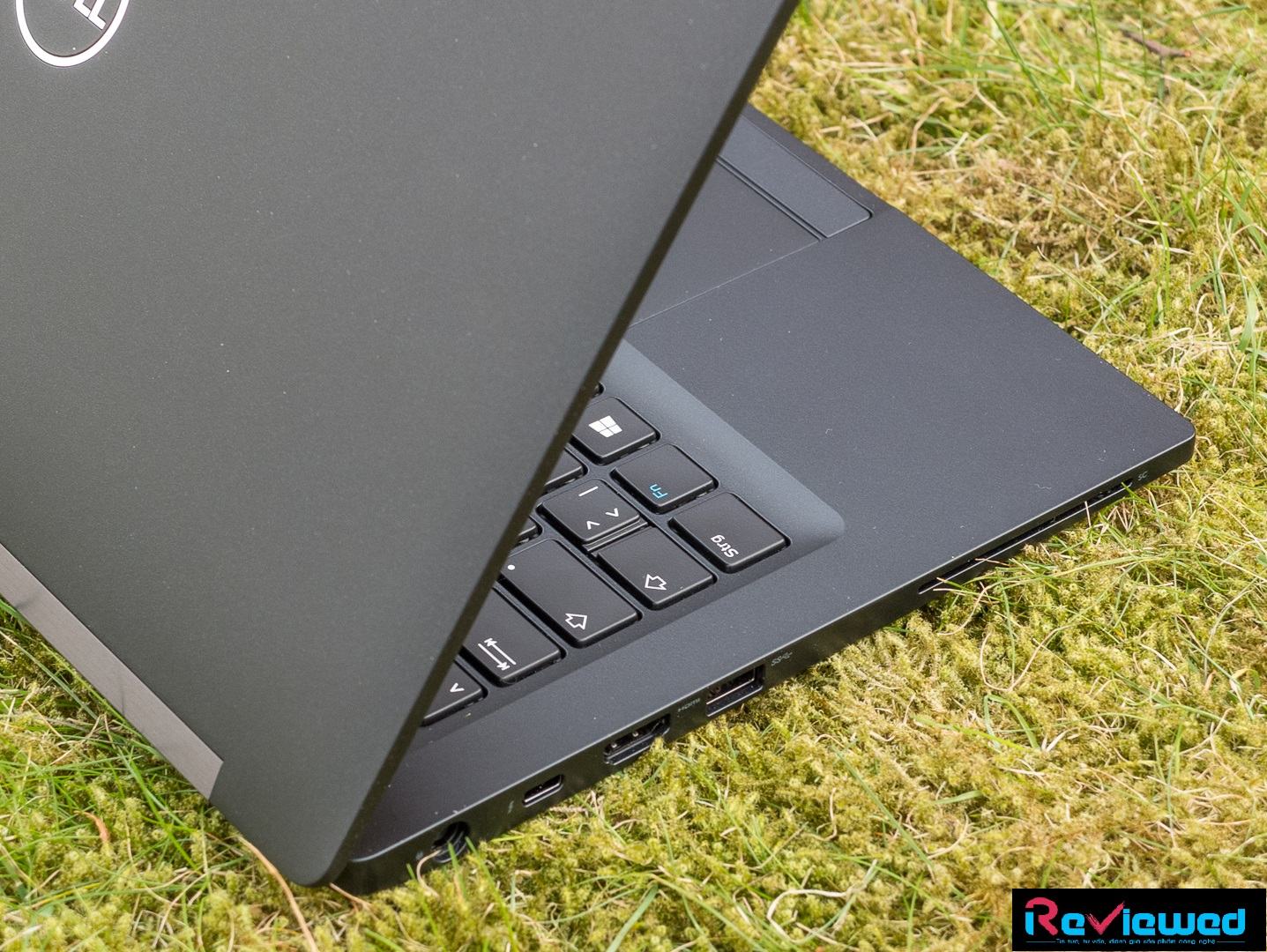 Besides the excellent build quality, the 7930 is well worth the extravagant price offered. The device is of high quality, sure, though simple but still highly iconic.

While the Dell Latitude 7390 stands out due to its rugged connectivity, you’ll probably be disappointed to find highlights such as Thunderbolt 3. The device has 2 USB 3.1 ports, a USB C port with DisplayPort, Ethernet. , microSD, microSIM, smartcard. Dell arranged the ports very reasonably on the 2 sides.

It has no separate maintenance compartment, and the battery cannot be accessed from the outside. The back cover is fixed by 8 Philips screws. After removing the back cover, you can access storage memory, fans, batteries. 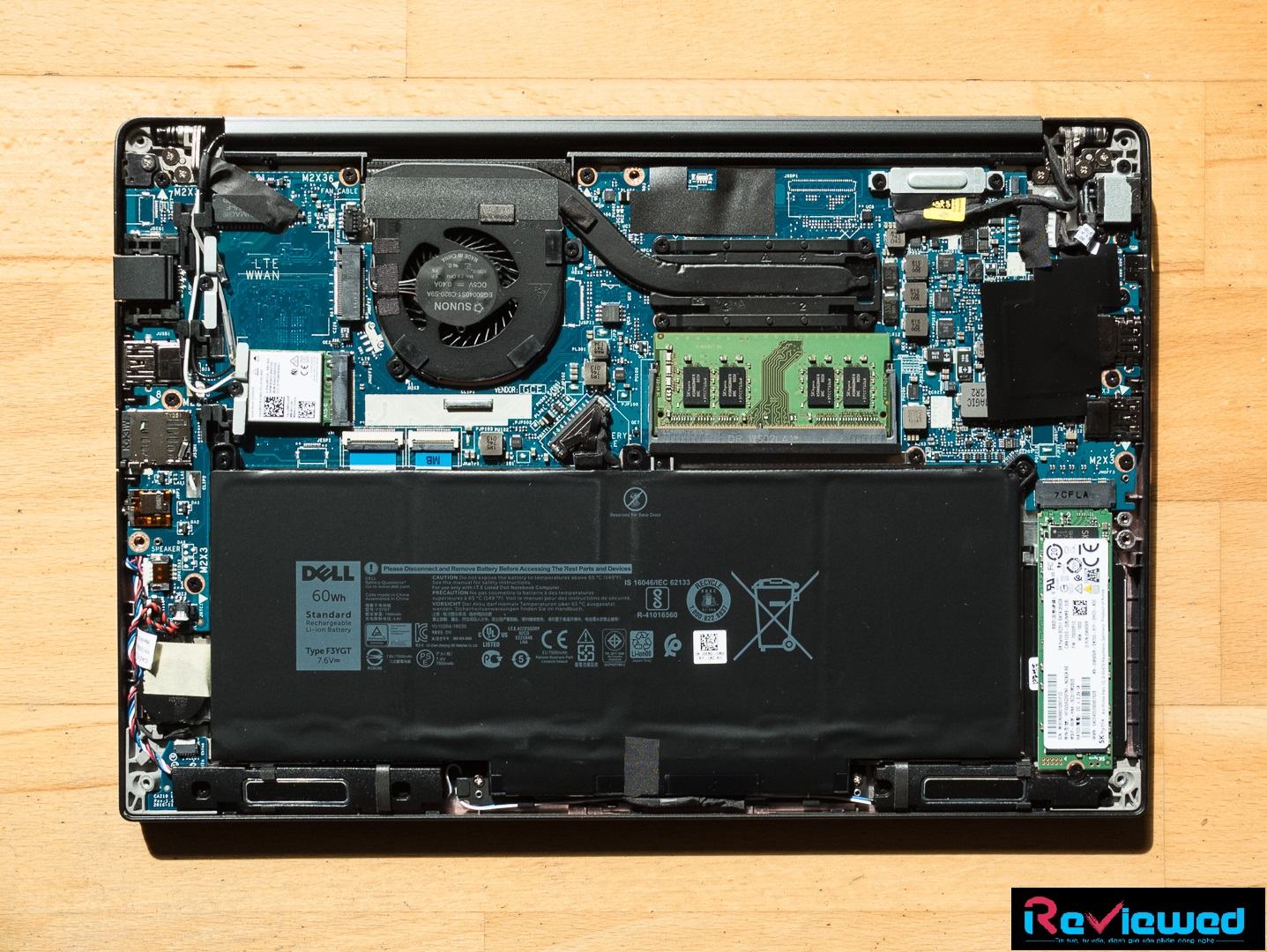 With an extremely quality keyboard from ThinkPad, Lenovo has set a standard that any manufacturer must compare from time to time. When it came to the Latitude 7930, Dell finally changed the minds of reviewers. The keyboard is relatively small in size compared to a standard keyboard, such as the Return key. The size and spacing of each key is fine, although for some people the size of 10 fingers will feel a little cramped.

The keys are slightly recessed, ergonomically. The force points are clear, the journey is short and the feedback is responsive to the tastes of most users. The typing experience and touch feel of the keyboard is quite high, not inferior to the good keyboards from ThinkPad. The keys when typing for a quiet and soft cry, only the Space key clicks a bit uncomfortable. 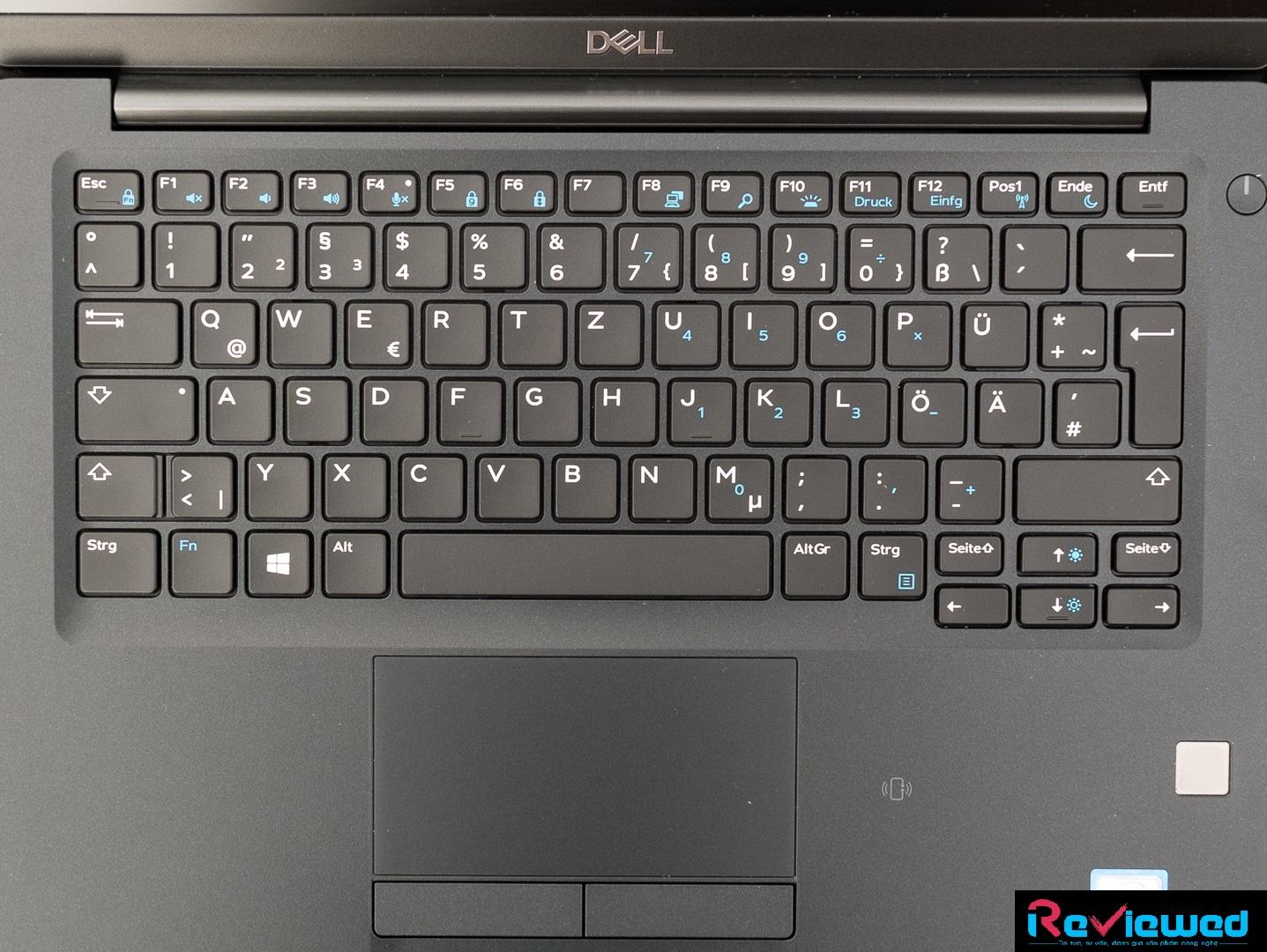 Comfortable wide touchpad with separate physical keys. The surface has minimal roughness, providing an easy mouse-to-mouse experience even with hand sweat. But this is still not the best touchpad today. The mouse has every pixel precision, all fast movements are well recognized. You can optionally remove up to 4 fingers inside the windows installer.

Despite a good screen brightness, but the outdoor visibility is still not really good, especially under direct light. When in the shade, the visibility is greatly improved as shown below. 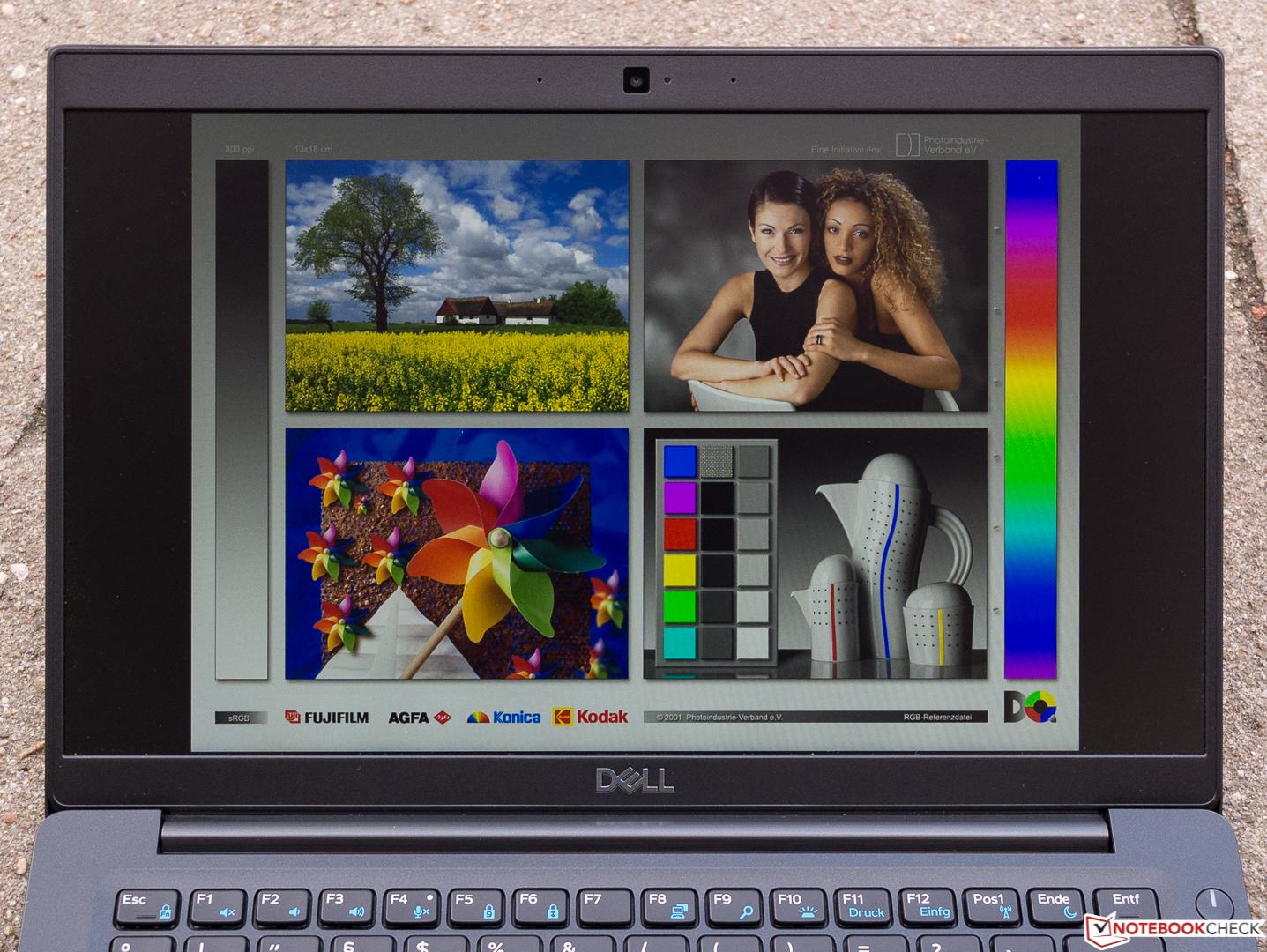 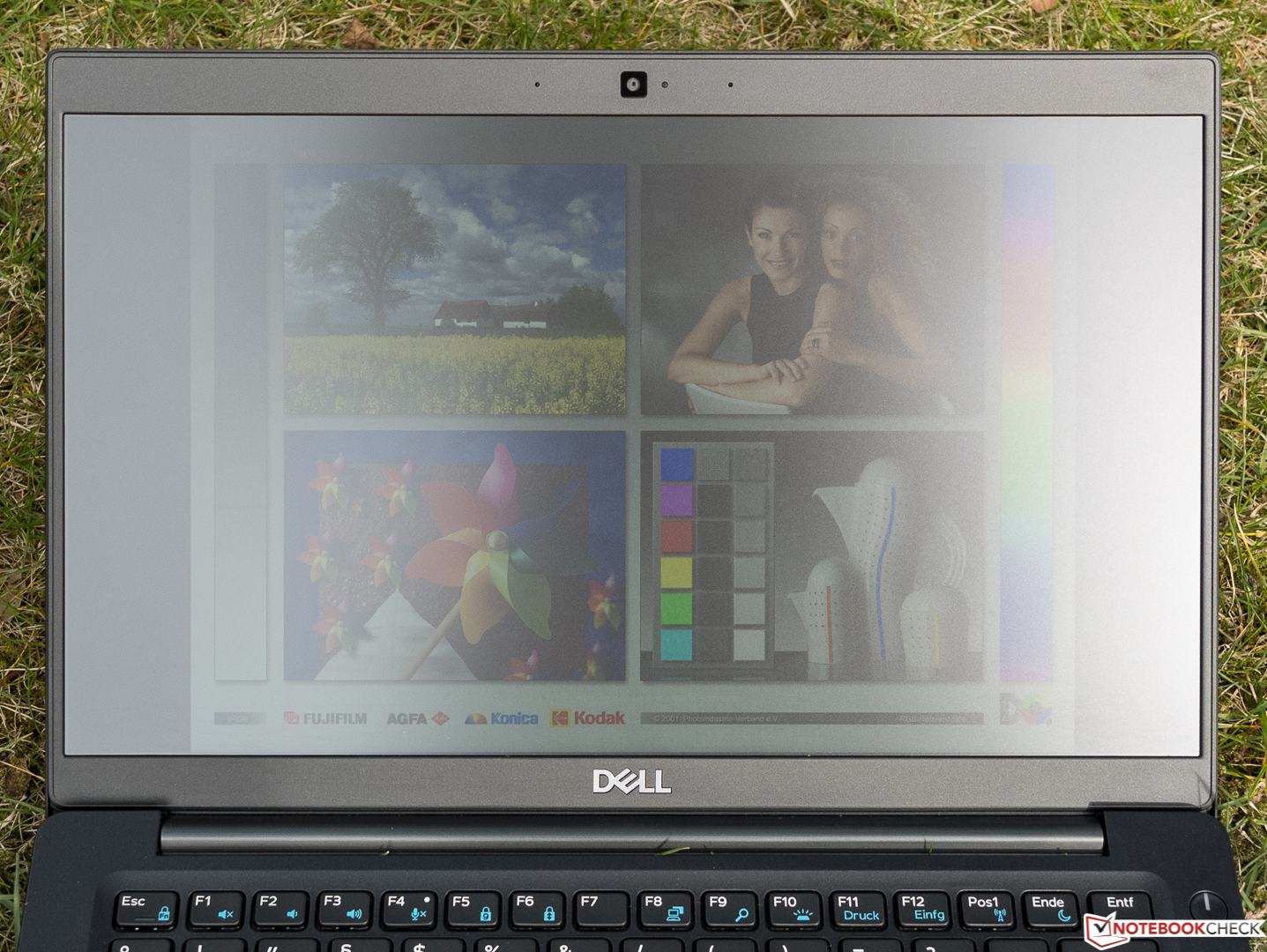 The Dell Latitude 7390 provides superior viewing angles as well as stability. At very narrow viewing angles, loss of brightness or contrast is unavoidable. But does not affect the daily use. 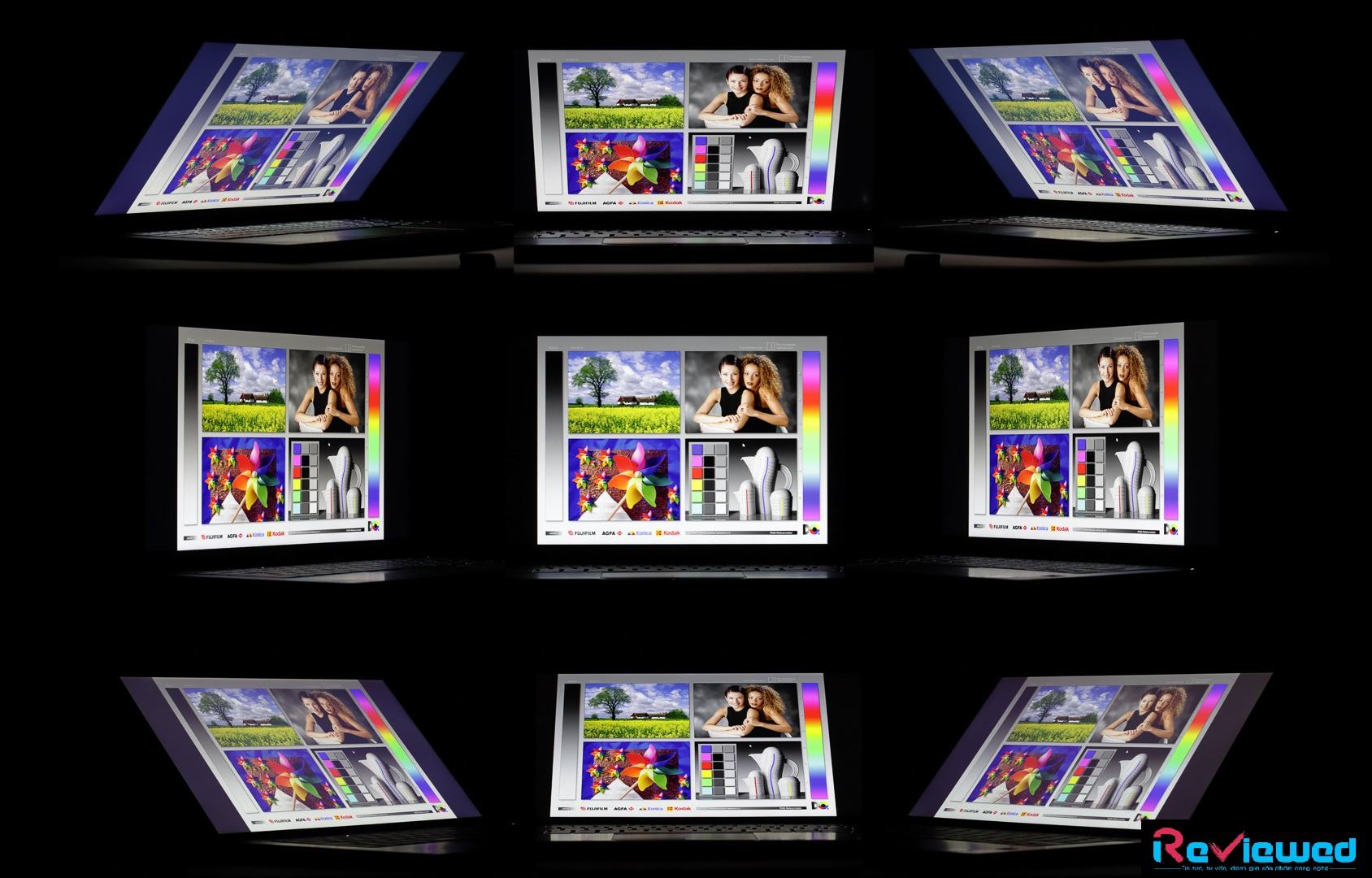 4-core ULV Core i5-8350U processor with 15W power consumption from Intel, based on Kaby Lake Refresh architecture. The base clock is 1.7 GHz, which can be increased to 3.6 GHz via Turbo. This is the fastest i5 CPU in its class. The previous generation, the i5-7300U (2.6-3.5 GHz) had only 2 physical cores but still supported hyperthreading technology. The integrated GPU is Intel UHD Graphics 620, the CPU also has a built-in DDR4 memory controller, capable of encoding and decoding H.265 video. According to Intel announced, CPU performance is about 40% faster than the previous generation. Unlike the smaller version i5-8250U, the 8350U version is integrated with Intel vPro technology.

Daily office applications are too simple compared to the power of CPU, older CPUs, even only 2 cores can take care of this job.

When all four cores are at full capacity, the processor quickly reaches its power consumption limit. The first loop Cinebench reached 625 points thanks to Turbo technology – a very high score, but the performance began to drop to 572 points in the second round, then continued to drop to 546 points. Finally the performance is maintained at 580 points after 7 loops. When using the battery, multi-core performance is not reduced. 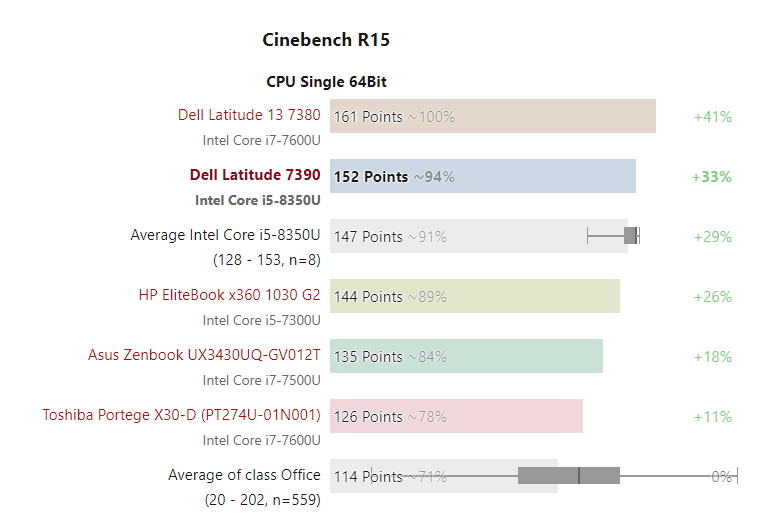 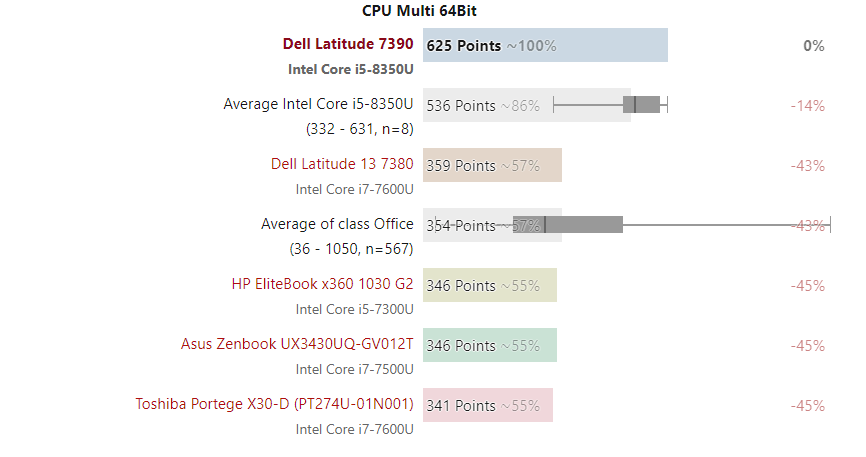 All of my experiences are very smooth, without any regrettable latency. Apps start very fast, start up quickly in just a few seconds. Multitasking can not make Dell Latitude 7930 difficult.

PCMark 8 scores of the machine does not have anything too special, all commensurate with the power of the machine. Because it only uses low-speed SSDs and single-threaded RAM, the overall performance of the machine is still behind some competitors. 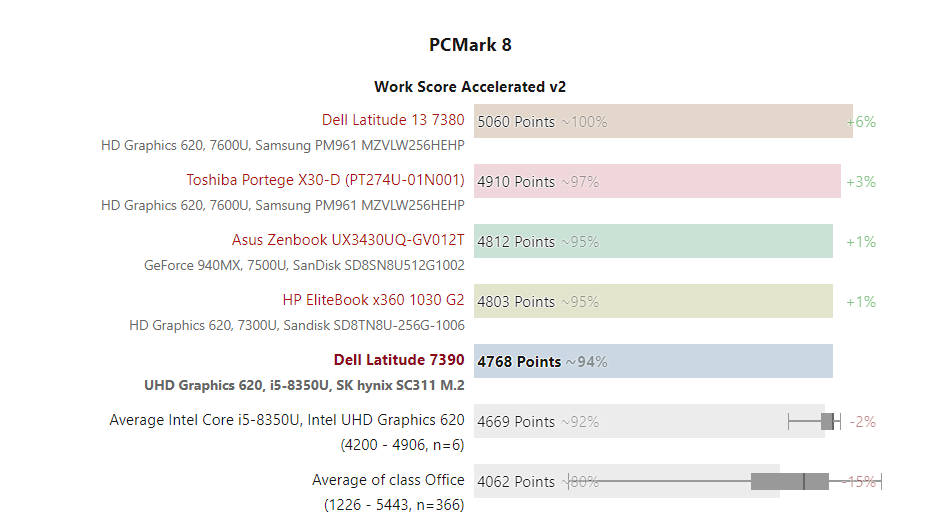 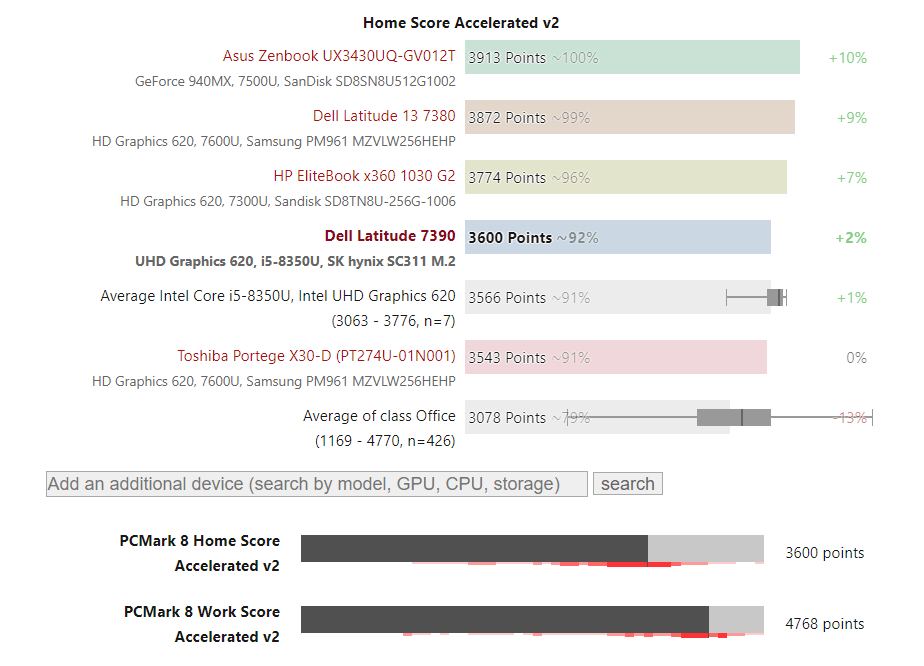 Overall performance through the marking with PCMark 10

On the version I use, Dell equipped with SSD SSD Hynix M.2 256GB via SATA port. Typical hard drive performance for legacy connectivity standards. The SATA III limit is only 500MB / s in sequential readings and small performance with 4K files. Therefore, the boot process for windows and programs is only average. Lower write speeds than competitors also contribute to the overall score of not too high. 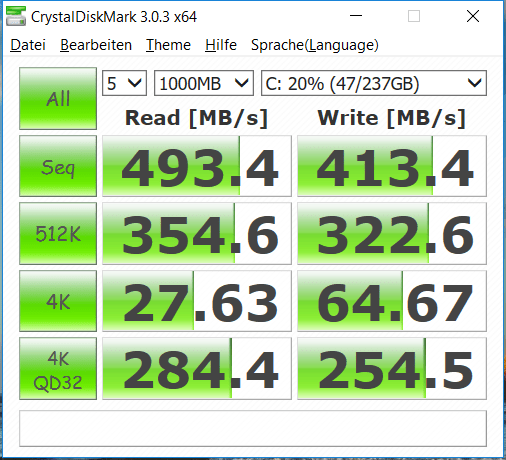 Graphics tasks are still handled by Intel UHD Graphics 620 – the GPU does not have native memory. On the Latitude 7390, the maximum clock speed is 1100 MHz. Intel HD Graphics will improve performance if the system uses multi-threaded RAM. Unfortunately, the Dell Latitude 7930 only uses one RAM stick.

After the tests, graphics performance above 7390 is average in the list of competitors. When compared to the Intel UHD Graphics 620 machines based on the database we have, the performance of the device is slightly lower than average. 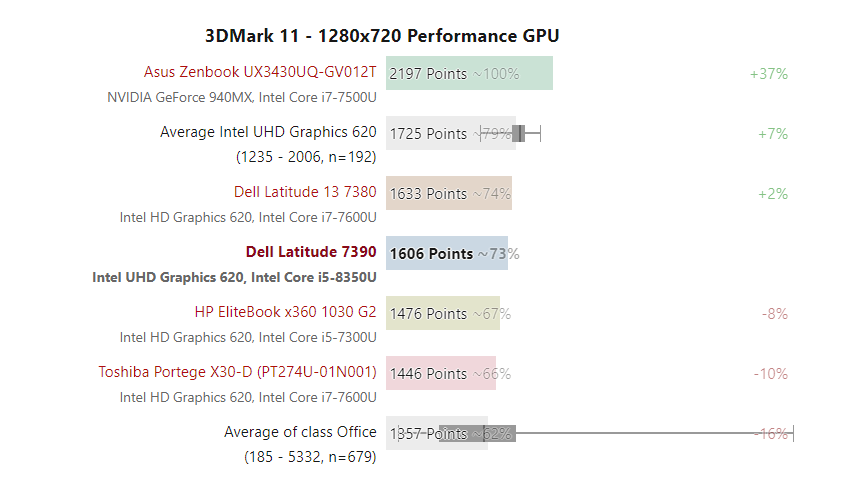 This GPU is not suitable for today’s heavy and demanding games. For example, even at the lowest resolution, the device still cannot play 2016 “Rise of the Tomb Raider” smoothly, not to mention games like “Final Fantasy”.

When in idle mode, the cooling fan does not work at all, sometimes the fan rotates abnormally even without changing the task. When performing a high-performance test, the fan started spinning after only 15 seconds.

Next, the fan speed is hysterical and differential. After about 2 minutes, the new fan reaches the maximum speed and noise level. Noise is not too annoying. In a quiet room, you can hear the fan cooling from a distance of 5 meters. After stopping the load, the fan continues to spin at high speed for a long time.

When under heavy load, using the Dell Latitude 7390 on the thigh is uncomfortable, as the underside temperature reaches 55 ºC. When the load is light or idle, the surface temperature is relatively low, only a few degrees higher than room temperature. Overall if with normal office tasks, the device is still quite cool.

After some audio tests, the sound quality is balanced, the maximum volume is quite good. The midrange and high center are handled quite well, though more towards the midrange and not too sharp. The speaker is completely bass-free, very weak and shallow. In general, watching movies and listening to music is quite annoying.

When in idle mode, the machine can operate continuously for 28 hours, equivalent to the previous generation. In addition, the device can maintain continuous browsing for more than 10 hours. With this number, you can fully use a full day of work without having to charge.

Price and address for sale

On the Latitude 7390, Dell has done nearly everything. A device that is not too expensive, you get a lot of advantages.

The machine has a lot of good points, but there are some points I am not satisfied with: The keyboard is very good but a bit small, the mouse button is bad, lacking Thunderbolt 3. The screen opening angle seems to have a design error in the large opening angle above 135 º . The part that annoys me the most when using the device is the bad speaker sound.

With the i5-8350U, Dell Latitude 7390 is completely redundant for office tasks, the battery life of the machine is very high. The body is made simple but high quality, complete security options, reasonable connectivity, bright screen with high resolution.

Post Views: 18 Just two days ago, Huawei Nova 5i was approved by China's TENAA agency and here, the phone has been revealed almost full specifications. Today, the agency's list has just added images of the Nova 5i and so we have a detailed look at both the front and back of this phone. According […]

Post Views: 70 Vespa has just officially launched the special 2019 Sprint Carbon version for the Malaysian market with two color options, Black and White. Vespa Sprint Carbon 2019 Accordingly, Vespa Sprtin Carbon 2019 has a total vehicle that is no different from other existing Sprint versions. A special feature of the car is the […]