We can not ignore an “old” technology but still worth mentioning that only Vespa is in the high-end scooter segment in Vietnam. It is a monolithic seamless steel body – characteristic of the Vespa line from 1946 to the present. Thanks to this sturdy shell, the Vespa GTS does not need a steel frame like conventional cars. However, because of the steel frame, Vespa is generally heavier than its steel pipe opponent – plastic body about 10 to 15 kg.

Of course, the 2-channel ABS system is also standard on the Vespa GTS 300 SuperTech. This is the result of cooperation between Piaggio and Bosch. With ABS technology, the brakes will help the car not be locked in the case of emergency braking or slippery roads. Both the front and rear brake discs with a diameter of 220 mm have a small circle on the inside of the brake disc and a sensor, the car will record the rotation of the wheel, comparing it to the speed of the running vehicle. on the road. When the driver pressed the front brakes, the ABS system began comparing the two speeds. When the speed of the wheel is slower than the speed of the vehicle, that is, the front wheel is sliding on the road, the brake will release so that the wheel does not slip but continues to roll and immediately brake again. 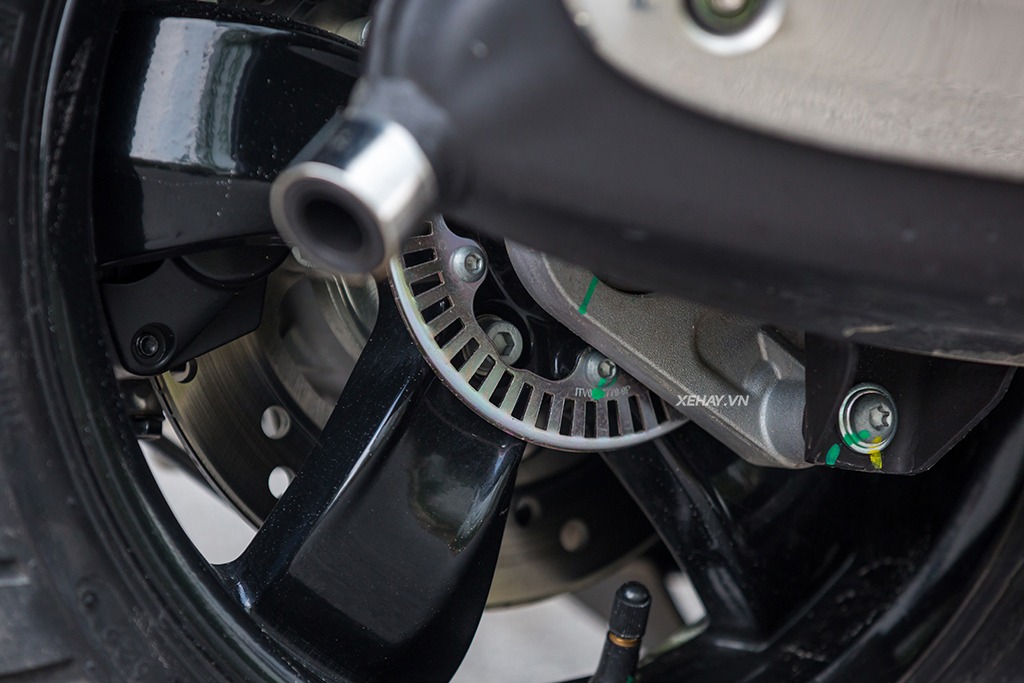 The continuous repetition of the above process will keep the wheel rolling on the road during the braking, ensuring safety even if the driver squeezes the brake handle. That is, when squeezing the front wheel brake, the car will slow down safely, when the wheel is always rolling, not sliding on the road, avoiding loss of steering and falling. This is especially important for women, in unexpected situations that startle the driver and squeeze the brakes tightly to stop the car, which often causes the car to fall when braking – ABS will help avoid this accident. 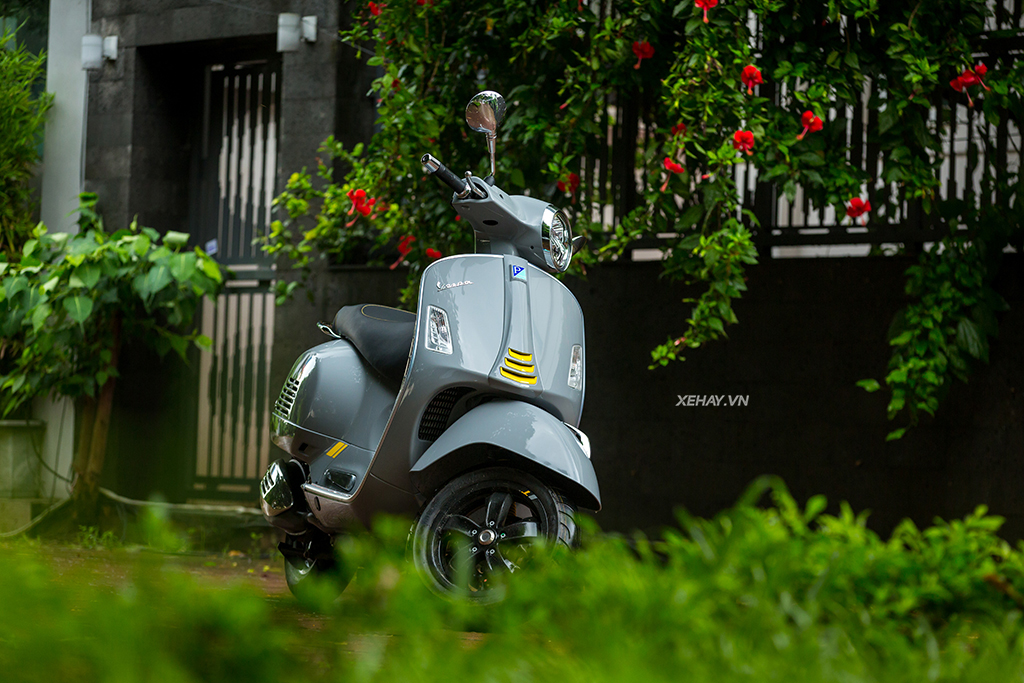 Piaggio is the first group to introduce active traction control (ASR) technology in a scooter model, starting with the Vespa GTS line. Basically, the computer measures the speed of the front and rear wheels. If the rear wheel has a higher rotation speed, that is, when it slips, the computer will automatically cut the engine power to prevent gear skidding. Although with many “silk handlebars”, equipping traction control for a scooter with more than 20 horsepower is like “using buffalo scalpel to kill chickens”, but for ordinary users, having 1 more system Safety systems operating in parallel with ABS is definitely a big plus, helping them feel more secure when driving. 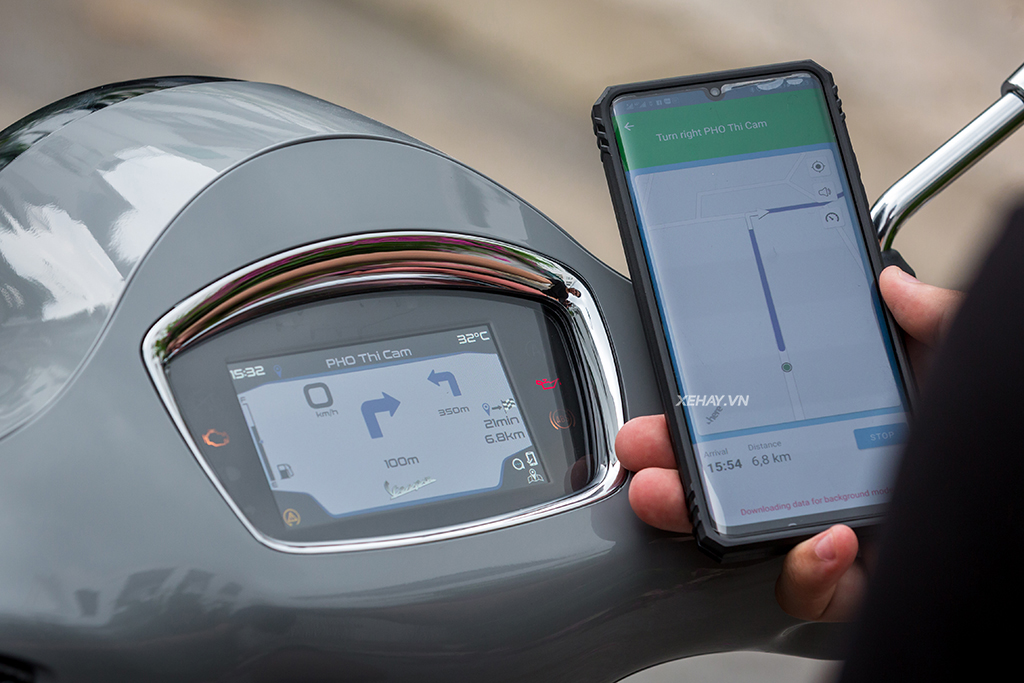 True to the name SuperTech, the GTS in the article also owns one more equipment, different from other GTS models. It is a 4.3-inch color TFT screen that displays information about speed, fuel consumption, ambient temperature, etc.The special thing about this screen is not stopping there. You can also connect your phone to this screen via bluetooth and the Vespa Mia software. 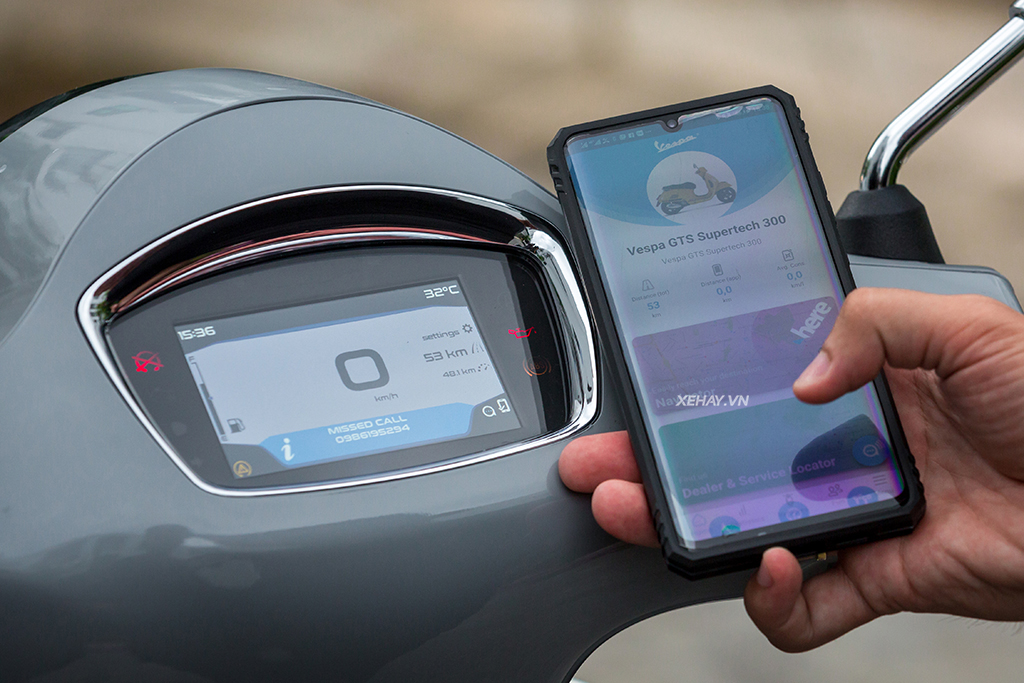 Connection takes about 1 minute, so you need to stop by the side of the road to make this safe. Once connected, you can rest assured your phone is in your pocket, while the screen will display incoming calls, messages and real-time navigation via Google Maps. The experience is best if you buy a pair of bluetooth headsets or if you pay more, you can buy a Vespa Jet helmet with a built-in speaker. After spending some time with the Vespa GTS 300 SuperTech, I found this screen to be quite useful. If the next-generation screen has full Vietnamese touch and display features, there is indeed nothing to complain about.

The most important upgrade of the GTS 300 SuperTech is the 278 cc HPE – High Performance Engine block. This is an upgrade from the Quasar machine, which is very familiar to Vespa players rather than an entirely new engine line. Although only an upgrade, HPE owns a lot of improvements, enough to bring a completely different experience. It should be noted that in Vietnam, only the SuperTech version is owned by the HPE engine, other versions of the Vespa GTS line still use Quasar engines. 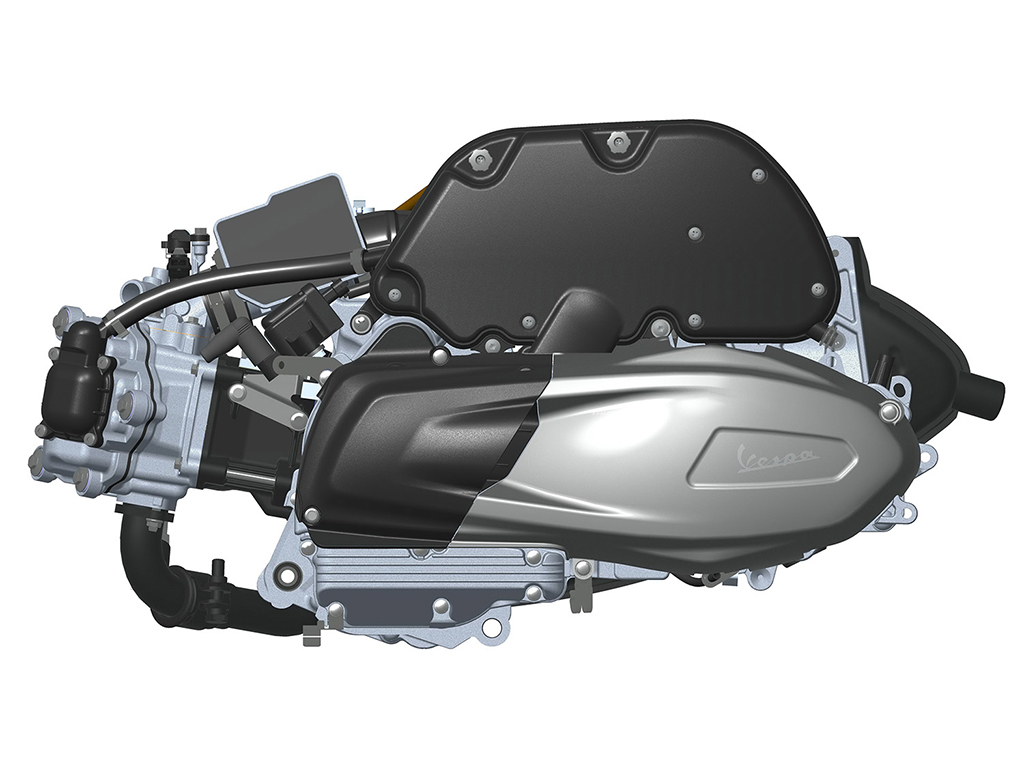 As mentioned above, HPE is an improvement of Quasar. The brand new cylinder head with a redesigned camshaft system to better serve the air needs of the new intake and exhaust valves is 3 mm larger than the Quasar. The intake manifold is also shaped to optimize torque at low revs. 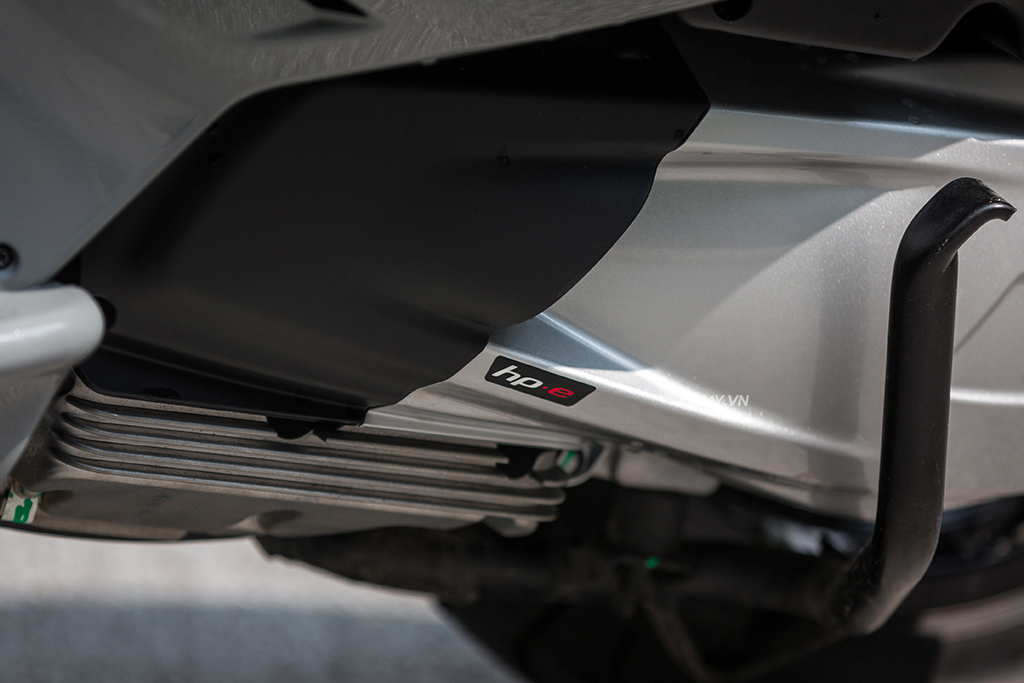 The HPE engine works with Magneti Marelli’s ECU and the final improvement is the new Iridum spark plugs. All of these improvements yield a maximum power of 23.8 hp at 8,250 rpm and maximum torque of 26 Nm at 5,250 rpm. These parameters are 12% and 18% better than the old Quasar engine, very impressive figures! 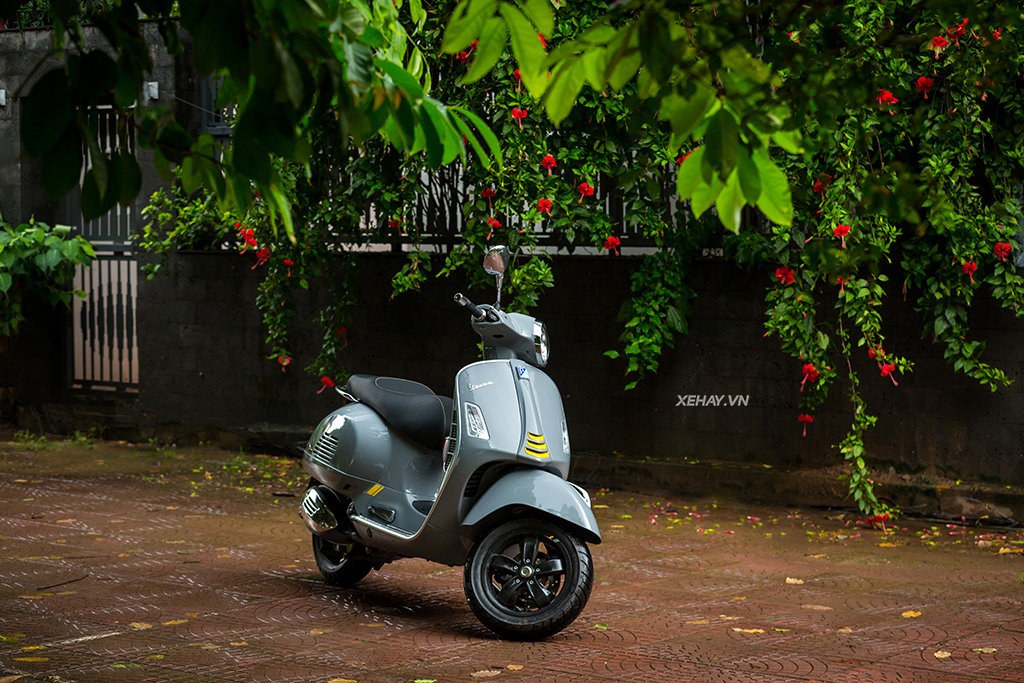 To take full advantage of the HPE engine block, the GTS 300 SuperTech gearbox is also improved with more durable straps and the drive components are reduced friction. All wrapped in a gearbox housing covered with a special layer of noise-proof material. My practical experience shows that the Vespa GTS 300 SuperTech is much smoother when operating, especially when turning on the throttle. This smoothness is a plus for the majority of general consumers, but there will be a few Vespa crazy fans who will miss the distinctive preaks from the Vespa era and use the 2-stroke engine. 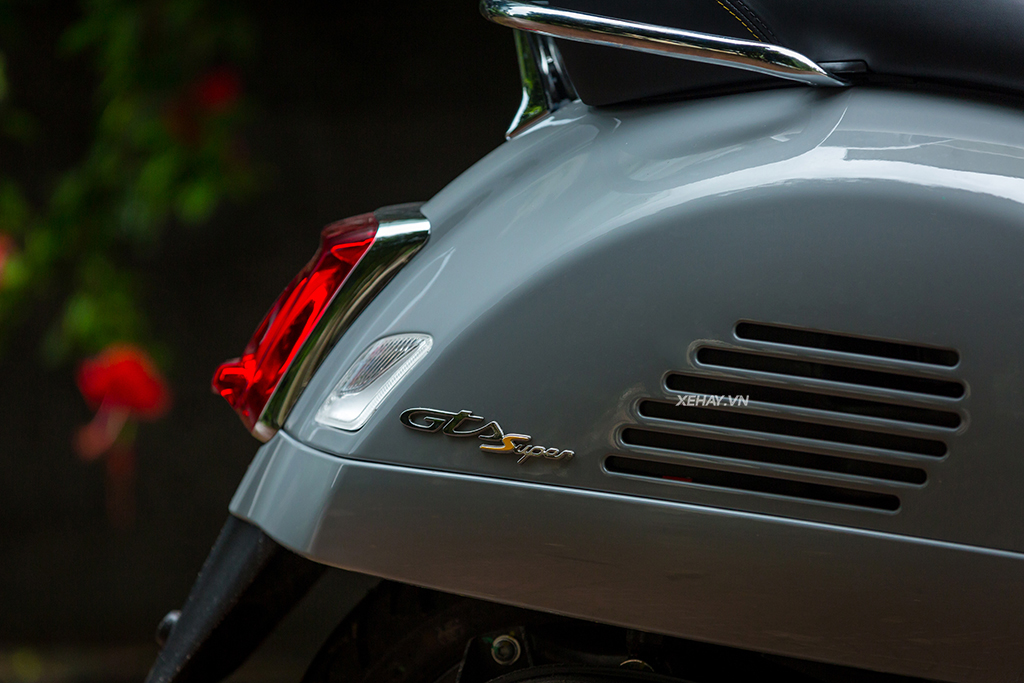 When I first screwed on the GTS, I was startled because the car reacted almost immediately! The acceleration of this maxi scooter right from the first throttle is very good, absolutely can make some guys riding a 300cc motorbike to humiliate! On its own test track, the Vespa GTS 300 SuperTech maintains impressive acceleration to 80 km / h and then gradually decreases. This is completely enough performance to satisfy the ability of Vietnamese customers on the street as well as the roads. The new engine block also appears to be less hotter than Quasar, although the heat that burns into the driver’s lap is still relatively uncomfortable, especially when it is hot. 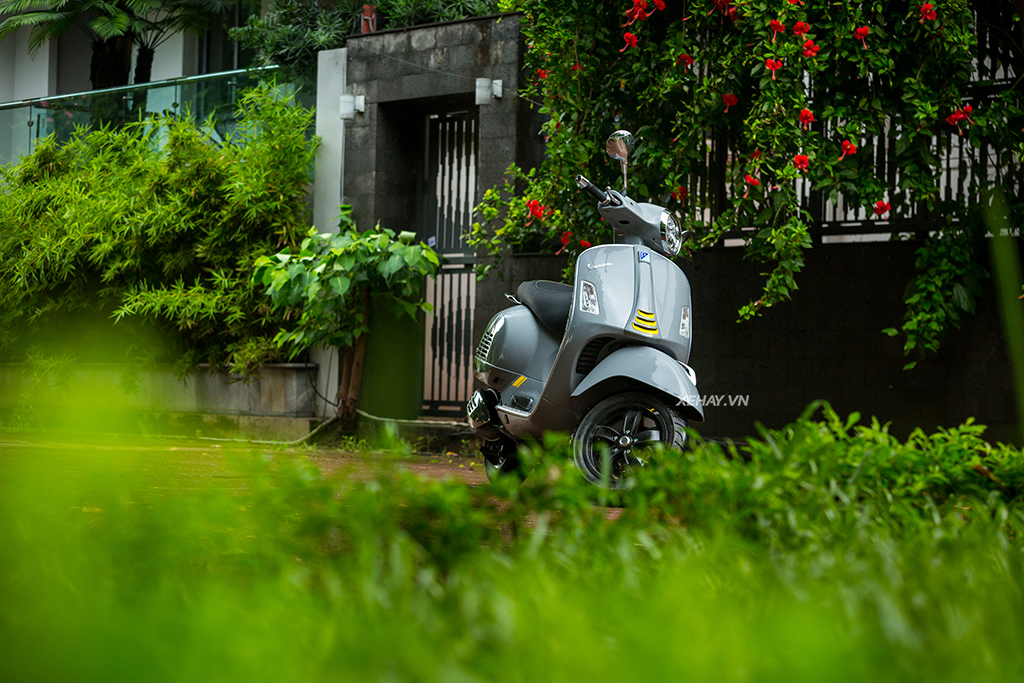 However, I easily ignored the discomfort by the heat when speeding up the steering. The car is very “good”, obeying each throttle twist with surprisingly accurate throttle. This top-of-the-line Vespa has a sturdy steel chassis, combined with a well-tuned suspension system that is extremely smooth, although I often run through the roads being crushed by overhead projects such as Ho Tung Mau or Nguyen Trai. The head of the car is light and flexible, the feeling of the road surface on the steering wheel is also very good, making me feel confident with the Vespa. This is quite different from the Honda SH300i driving experience, although on paper, the Vespa GTS 300 SuperTech is even a little heavier than the opponent. Of course, if you try to accelerate straight, Honda SH300i marginally better.

Not for the majority! 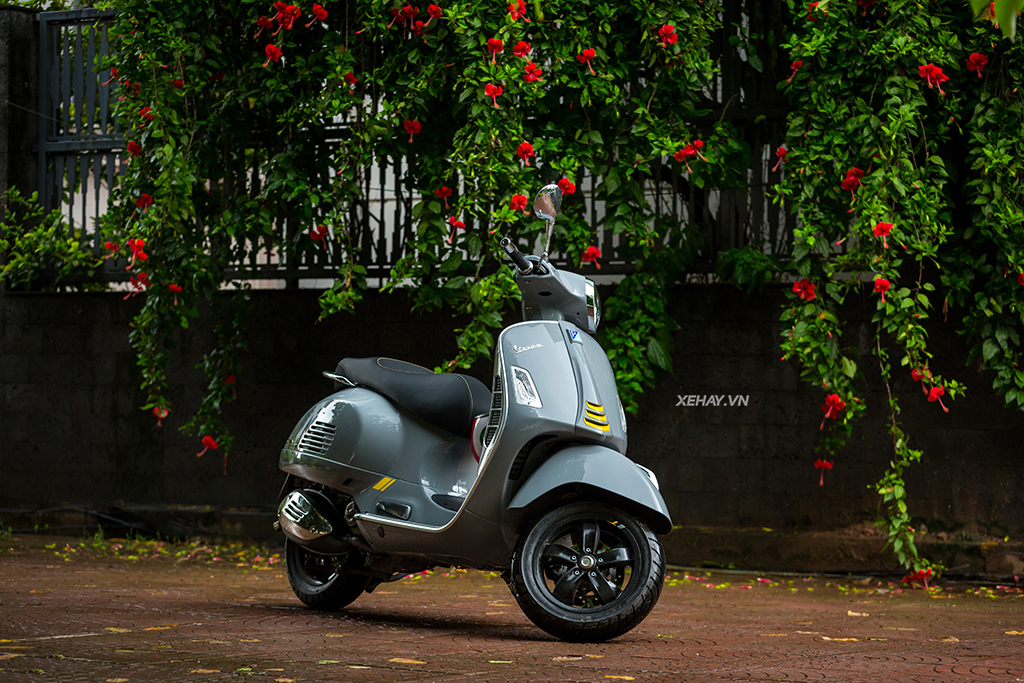 In 1954, the first “bees” followed the French to Vietnam, starting the conquest of the East. Since then, there have been countless generations of Vietnamese growing up on the Vespa. From the magnificent Saigon, Vespa progressed to the old town of Hanoi with an utmost respect by the price of the “small bee” at that time equaling the houses on the street. Vespa owners in the North are considered upper class, they represent an elegant, modern, cultural and intellectual lifestyle. Vespa that day is not for the majority of the population. 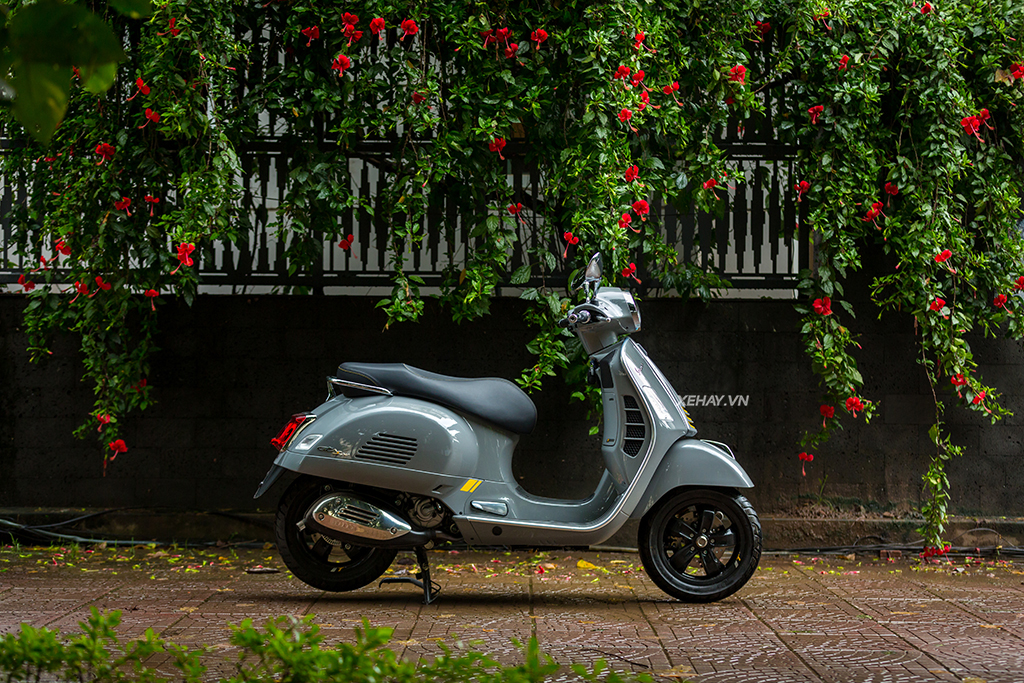 That affirmation is still somewhat true to the present time. Although the price of Vespa is much cheaper than 20 years ago, it is still high compared to the common ground and Vespas are always the most expensive scooters. Today, Vietnamese consumers have more options when they want to buy a scooter, which confirms that Vespa is only for those who are really passionate about cars over 7 decades old. And even among very few people who choose a Vespa, fewer are choosing the Vespa GTS 300 SuperTech – the most powerful and most expensive version. Once again, I want to affirm: you don’t need a Vespa, you want to own it, simply because it is Vespa!