Perhaps the most special mechanical aspect of the Tesla Model 3 is its suspension. Also true to Elon Musk’s style, he claimed that his automaker used the results of NASA’s (Aerospace Administration) research to refine the Model 3 suspension. NASA has studied how long the human body can feel comfortable being subjected to a frequency of continuous oscillation. According to Tesla, car suspension systems are generally designed to oscillate at frequencies from 1 to 3 Hz. Based on NASA research, Tesla engineers designed the Model 3 suspension to simulate natural vertical oscillation as we walk. They believe it is the best oscillation frequency to make passengers comfortable on every trip but do not give specific numbers. Are they afraid of being copied by another car company? 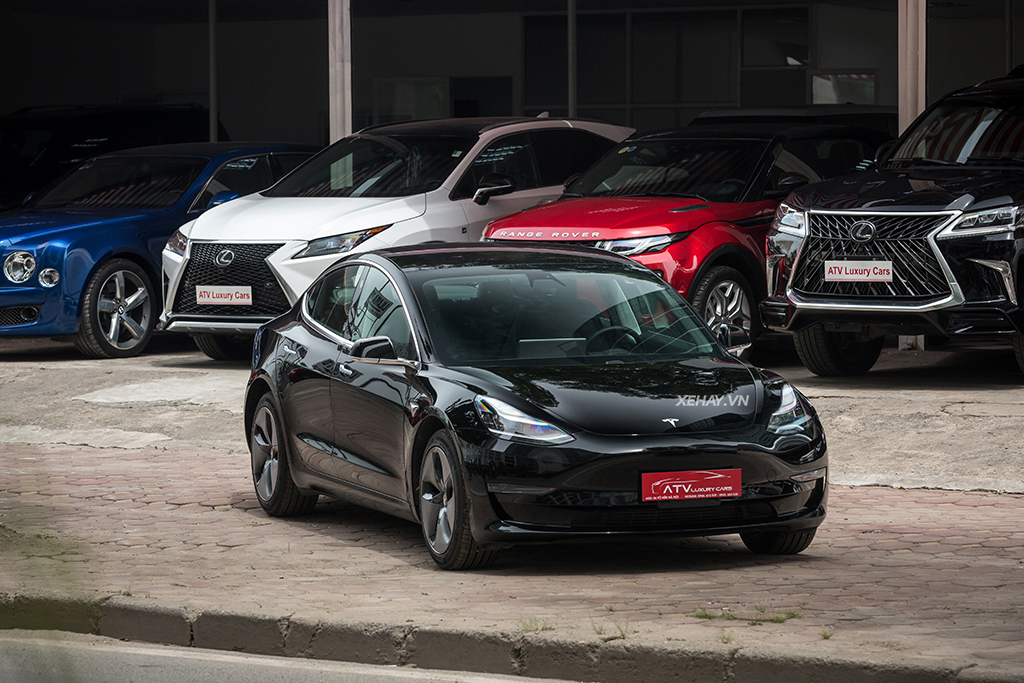 The Tesla Model 3 not only impresses journalists and mainstream users, it also captivates industry experts. Sandy Munro, a leading expert in car manufacturing consultancy, once stated that “With Model 3, Tesla is at least 10 years ahead of the entire car industry.”. He also pointed out that the first Model 3s had machined bodywork quality “just the KIA cars of the 90s” so it was clear that there was no bias here. 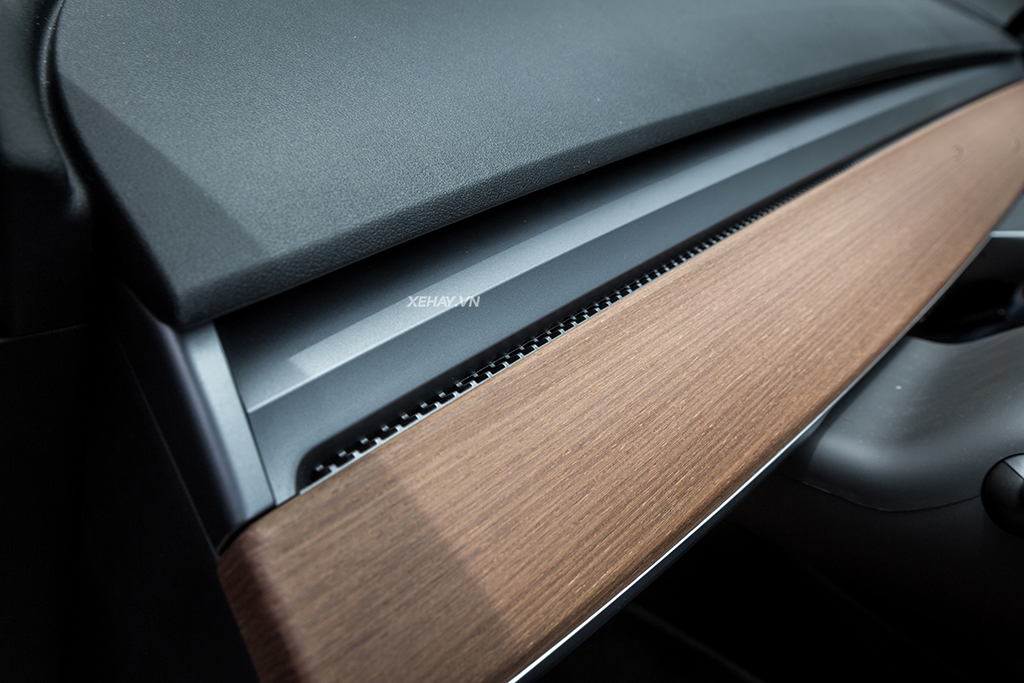 “The sophistication of the Model 3 electric motor and circuit boards is comparable to the most high-end smartphones or gaming computers, even comparable to military electronics. Simply put, the Model 3’s electrical system is as sophisticated as the Lockheed Martin F35 Lighting II stealth aircraft, ”said Sandy Munro. “I also thought Samsung or LG car batteries were the best in the world until I rummaged around for Model 3 batteries. The difference in amperage between tens of thousands of batteries was only 0.2 milli- amps! No one can do what Tesla is doing. No one!” 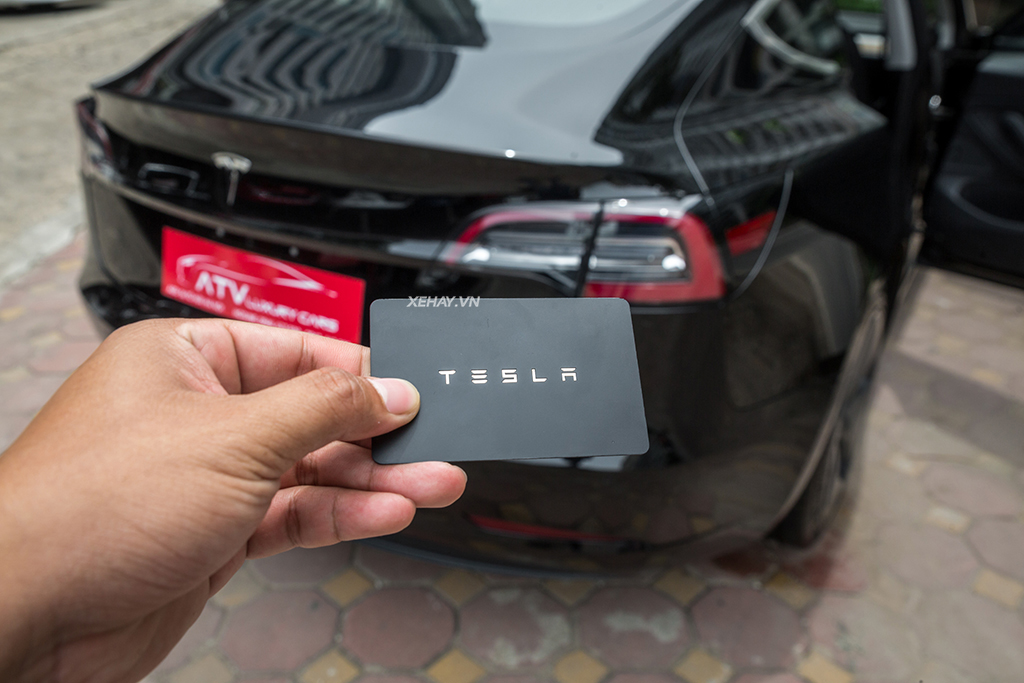 Driving a Model 3 was a special experience for me. The car only has about 283 horsepower, the ability to accelerate to 100 km / h in more than 5 seconds – the numbers are not impressive compared to the high-performance cars I’ve ever driven. However, the experience with the Tesla Model 3 is more special than all because this is the first time I experience a fully electric car. It took a few minutes to adjust the steering wheel, mirrors and seats, as well as disdain every feature of the giant screen in the dashboard. Put the shift lever to the right of the steering wheel and … nothing will happen. It turns out that the car has the option of entering the D and releasing the brake pedal, do you want the car to slowly roll. 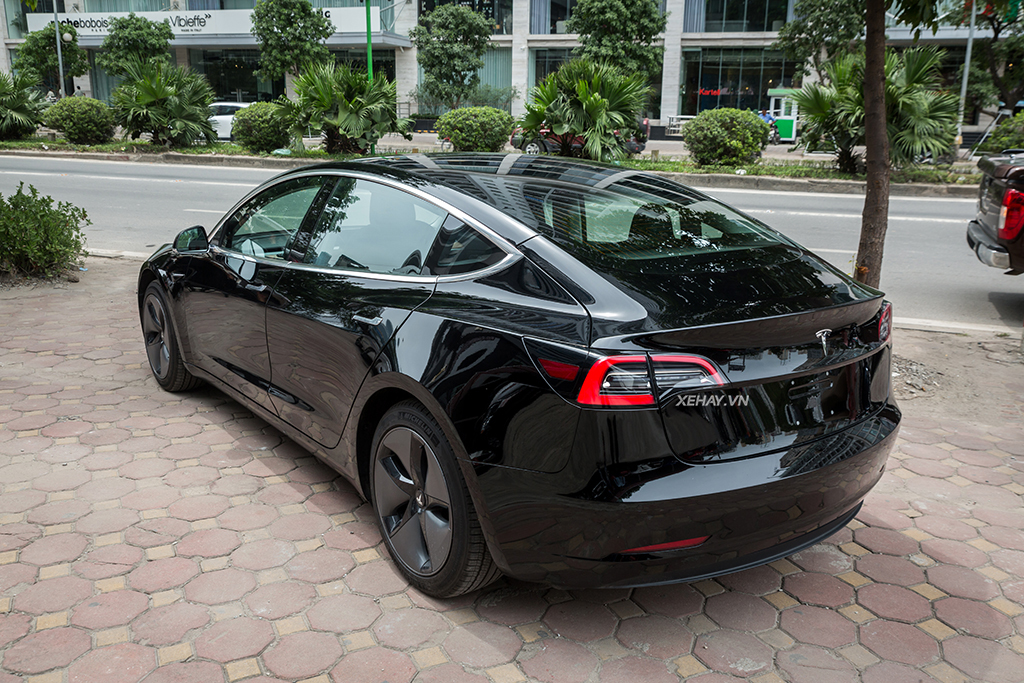 The first few hundred meters behind the Model 3 steering wheel is one of the quietest driving experiences I’ve ever had. The car smoothly glided forward without any screams or vibrations. I suddenly thought that if all the cars in Hanoi were running on electricity, I would not know how quiet the street would be! Another strange thing is that I do not need to use the brake pedal because only slightly release the accelerator pedal that the car has braked by the engine itself – this brake force can be adjusted. This is a typical driving experience with electric pedals. 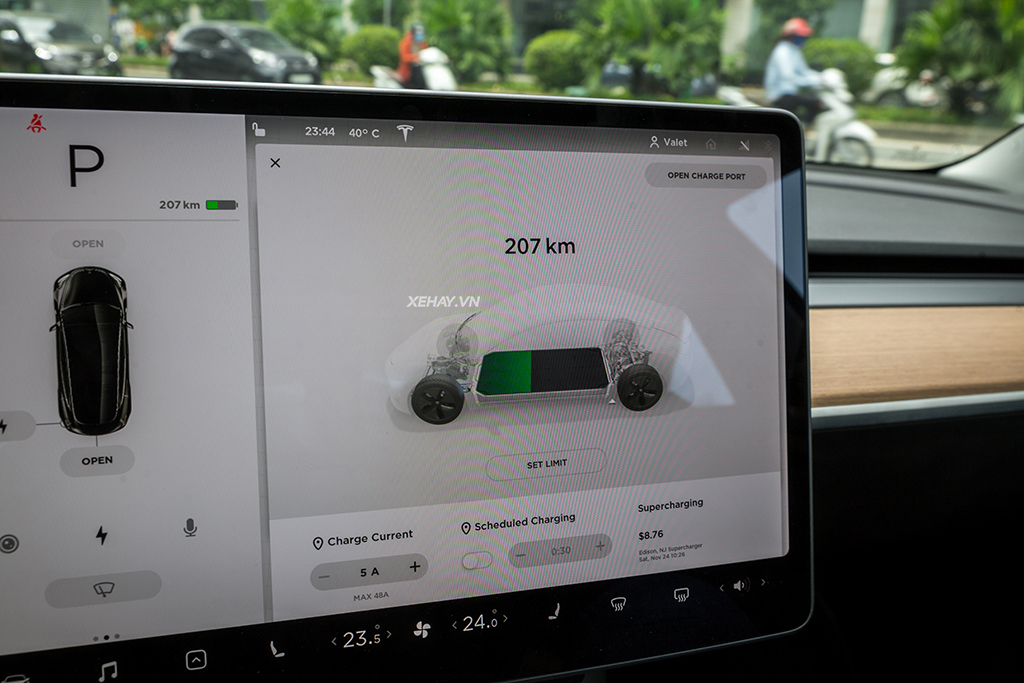 Sitting in the driving position, the view is extremely airy because the spacious glass frame in front and on both sides, and the roof of almost all glass also offers strange views. All of this glass is coated with ultraviolet and infrared protection from the factory so you do not need to attach glasses anymore. The number of remaining batteries and the number of kilometers traveled is shown by the blue battery image that looks familiar to Apple fans, and the central screen is as sensitive as an iPad. 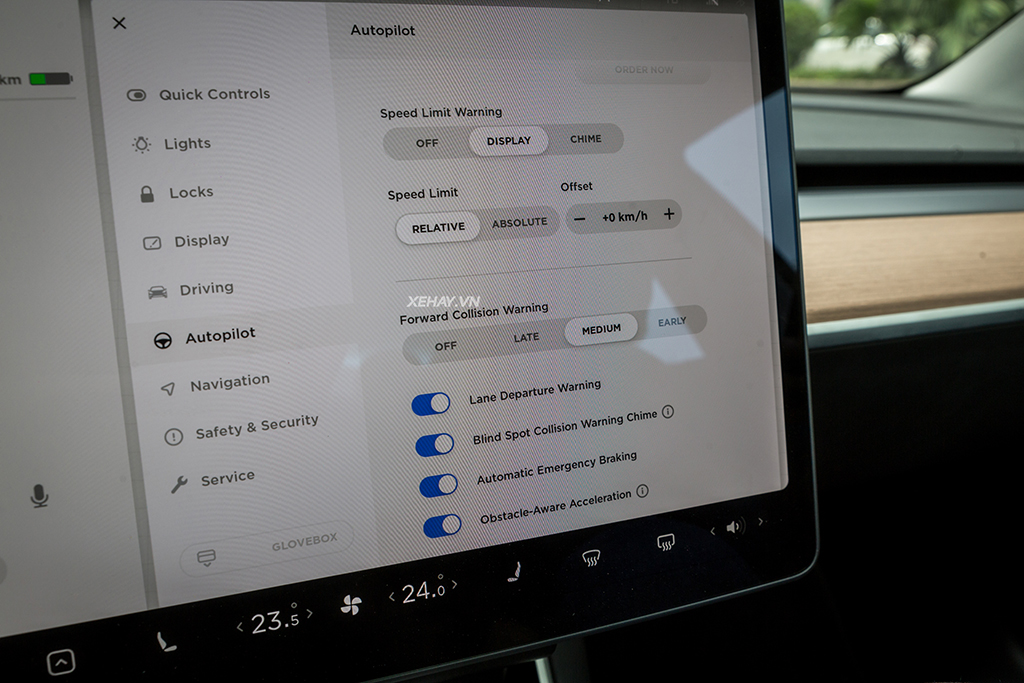 All features are customizable

Trying to kick the gas a little bit, the Model 3 reacted immediately! There was no delay, no screaming, no shifting. Pedal is walking, releasing is braking, as simple as playing a game. One thing that really surprises me is that the Model 3 steering wheel feels very good, the steering is responsive, responds quickly and provides fairly honest road feedback. In terms of steering wheel feel, I appreciate the Model 3 more than the F30 BMW Series 3. When cornering, the car is also extremely stable, did not feel a bit stalled or reclining. That’s thanks to good suspension and a sturdy chassis. 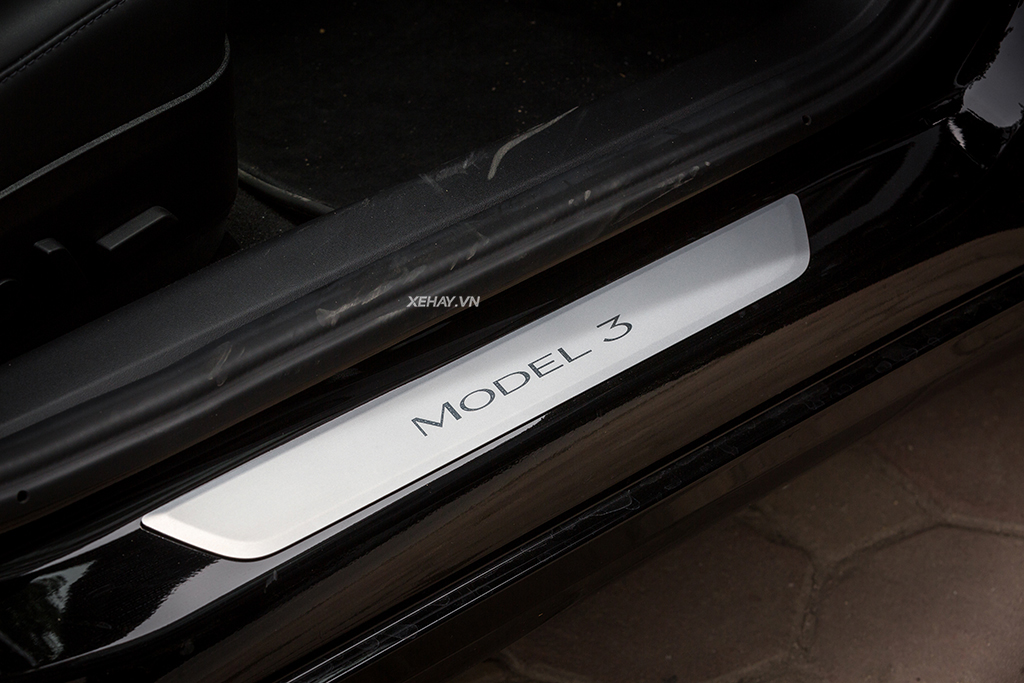 However, the lack of engine noise and exhaust makes me feel that the car lacks something hard to put into words. Many will call it the “soul” of the car, and I will call it “the meaning of driving.” Tesla has been extremely successful in creating a Model 3 with a series of plus points on mechanical quality and performance, but the lack of driving emotion is always around in my mind during the experience. . Yes, a BMW or Mercedes does not have the superior powertrain of an electric car like the Tesla Model 3 but for enthusiasts to drive, a car using an internal combustion engine is still a lot of fun after it. more mausoleum. 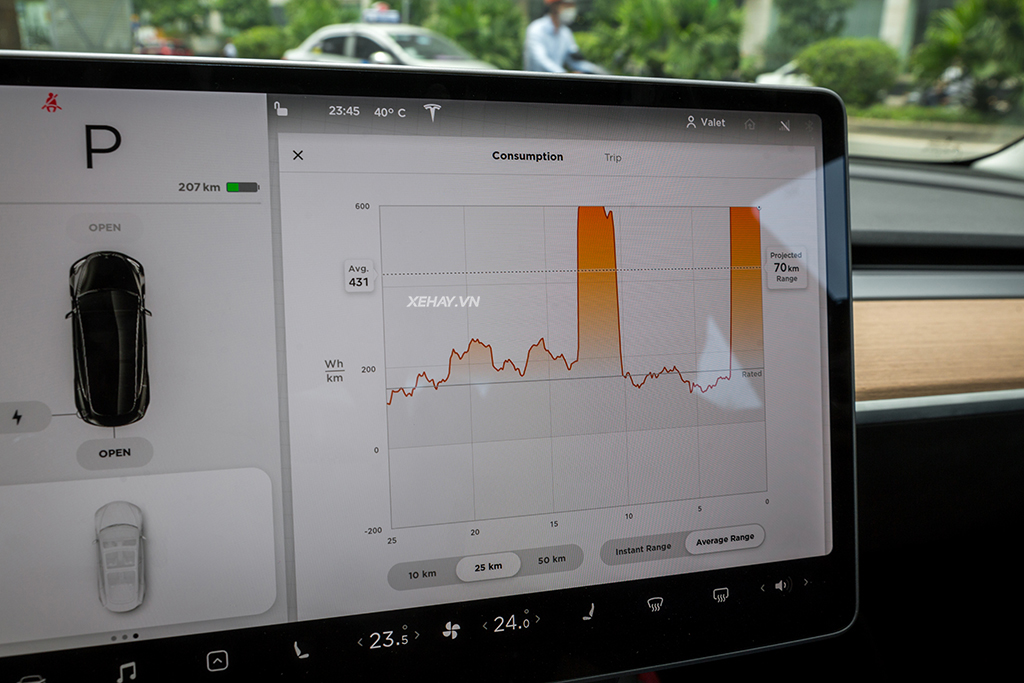 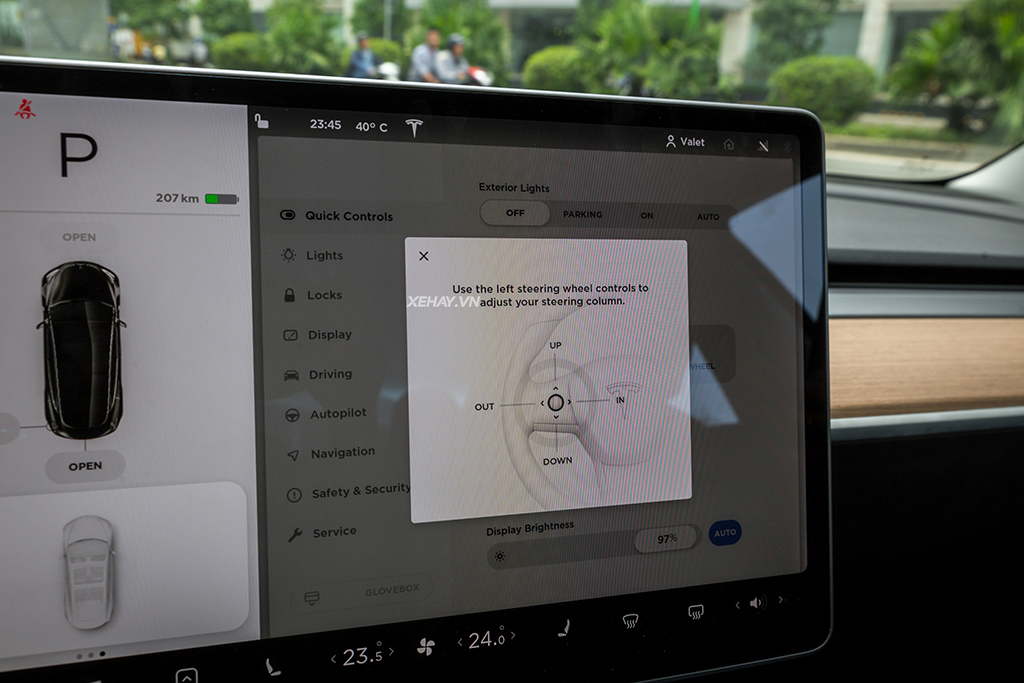 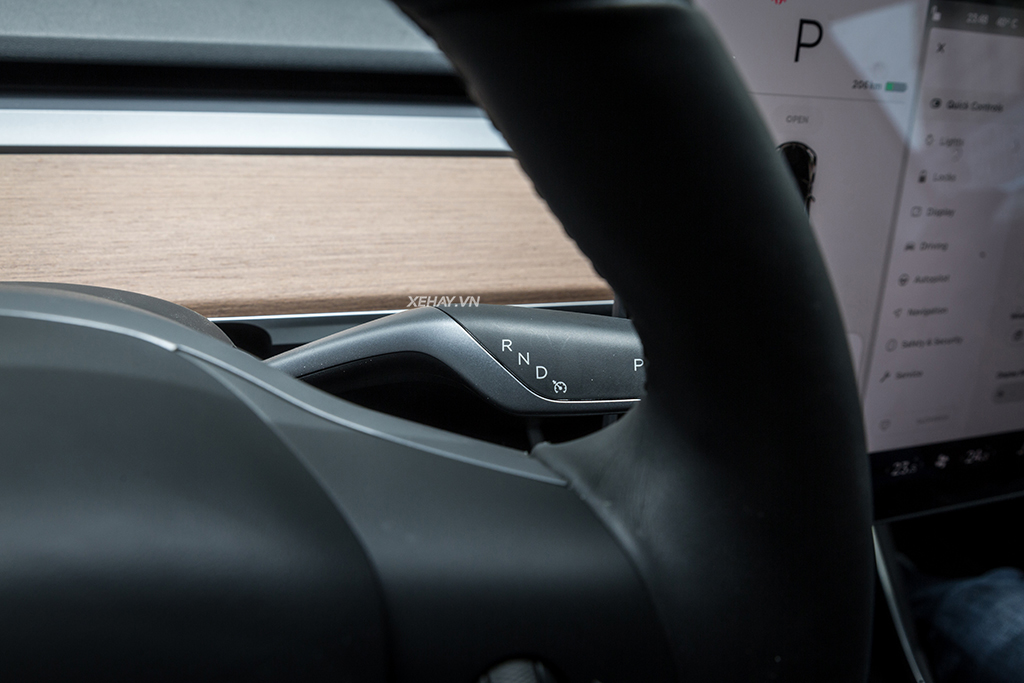 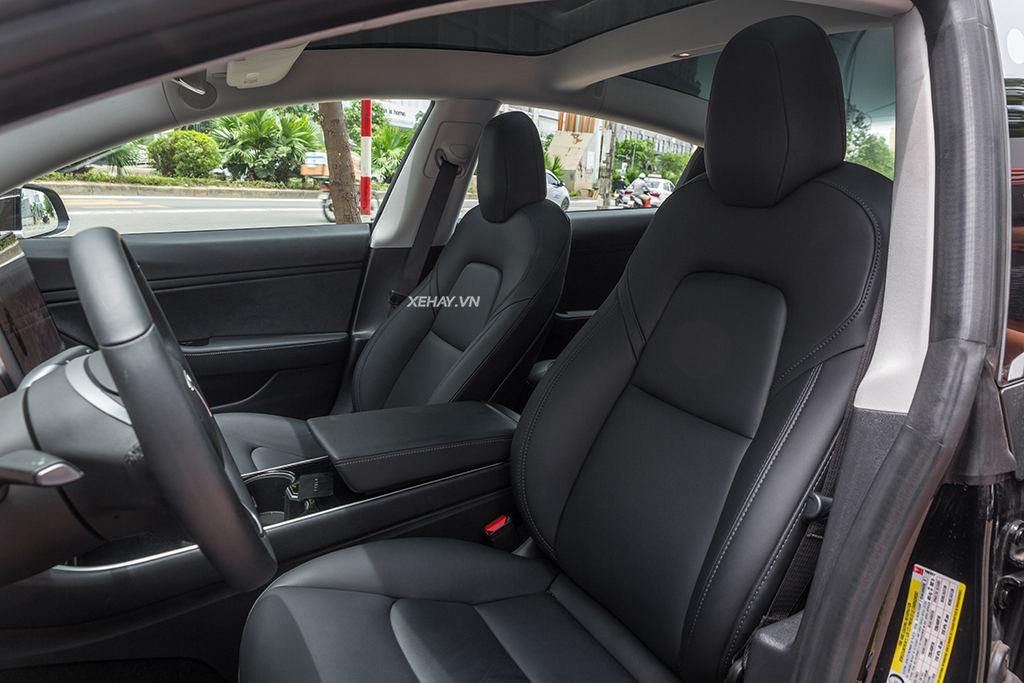 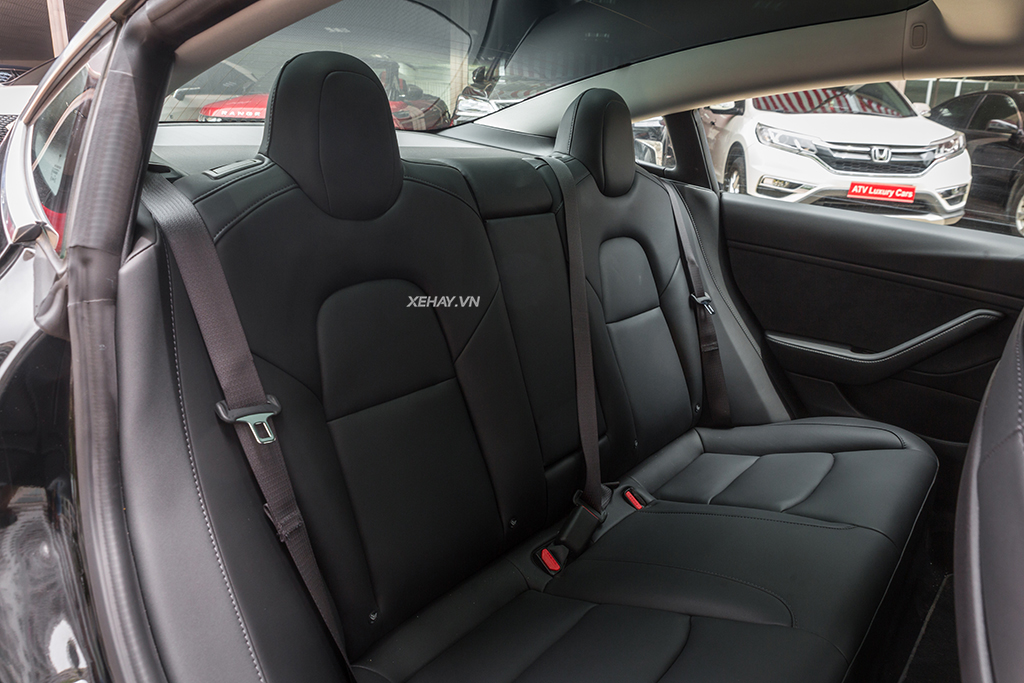 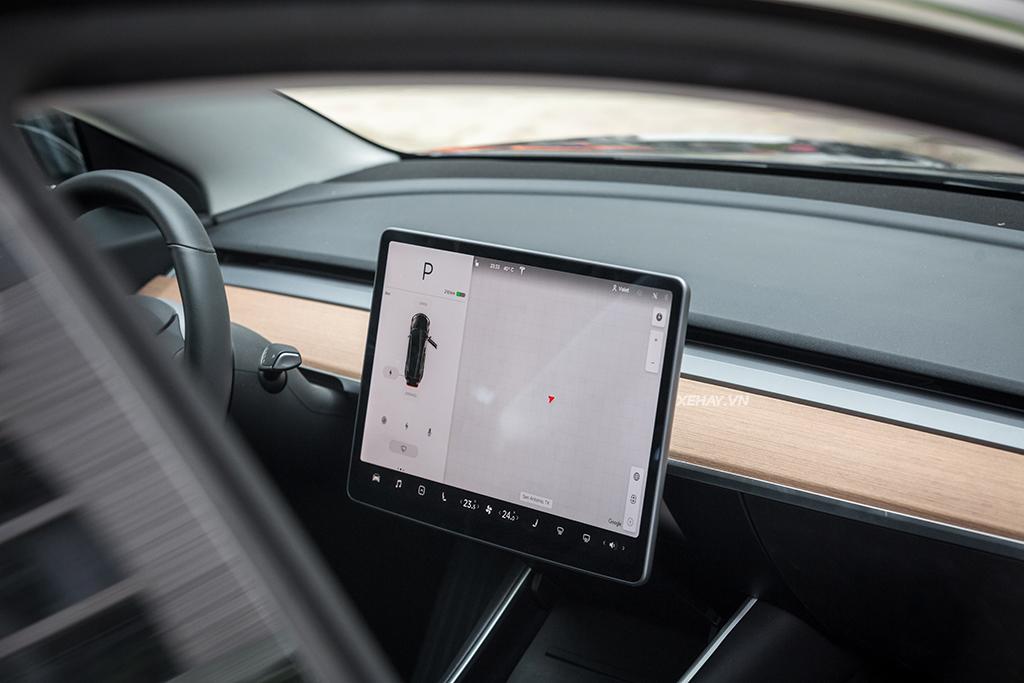 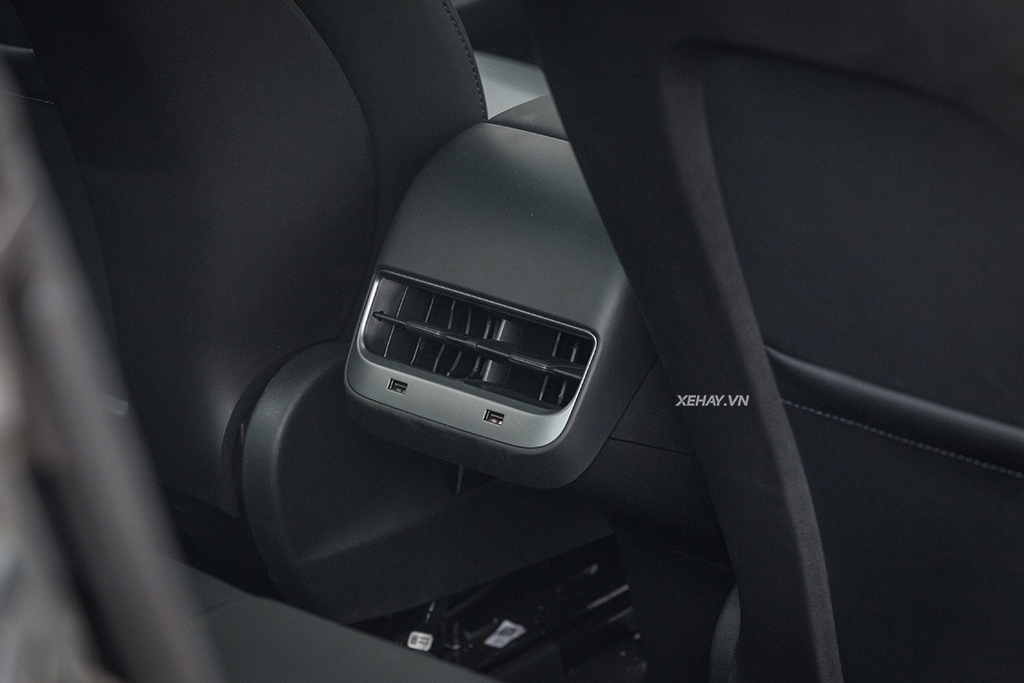 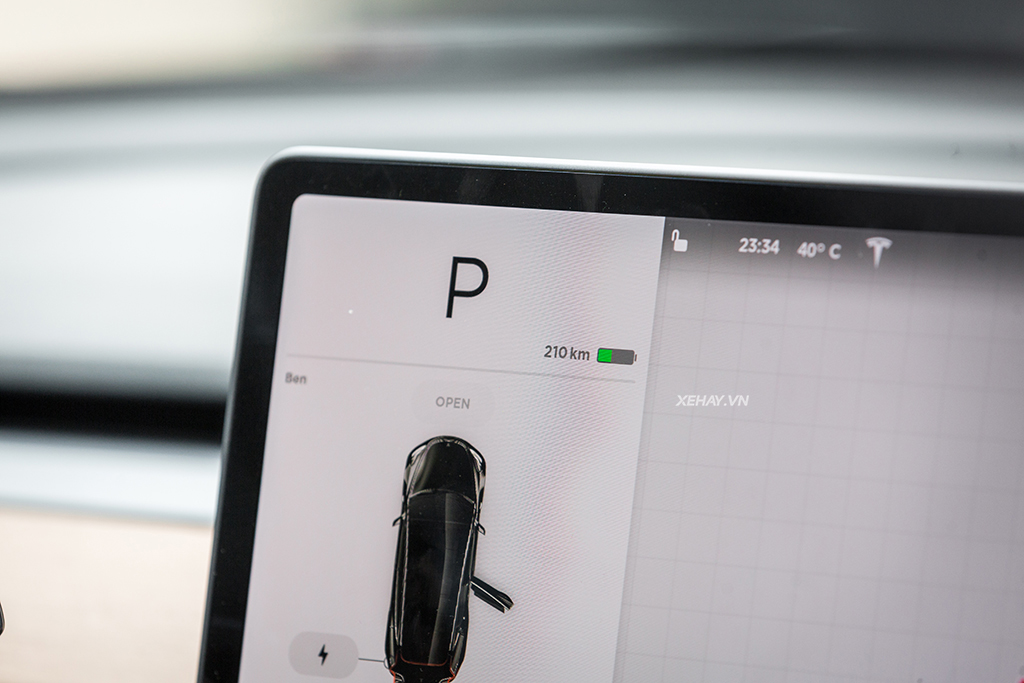 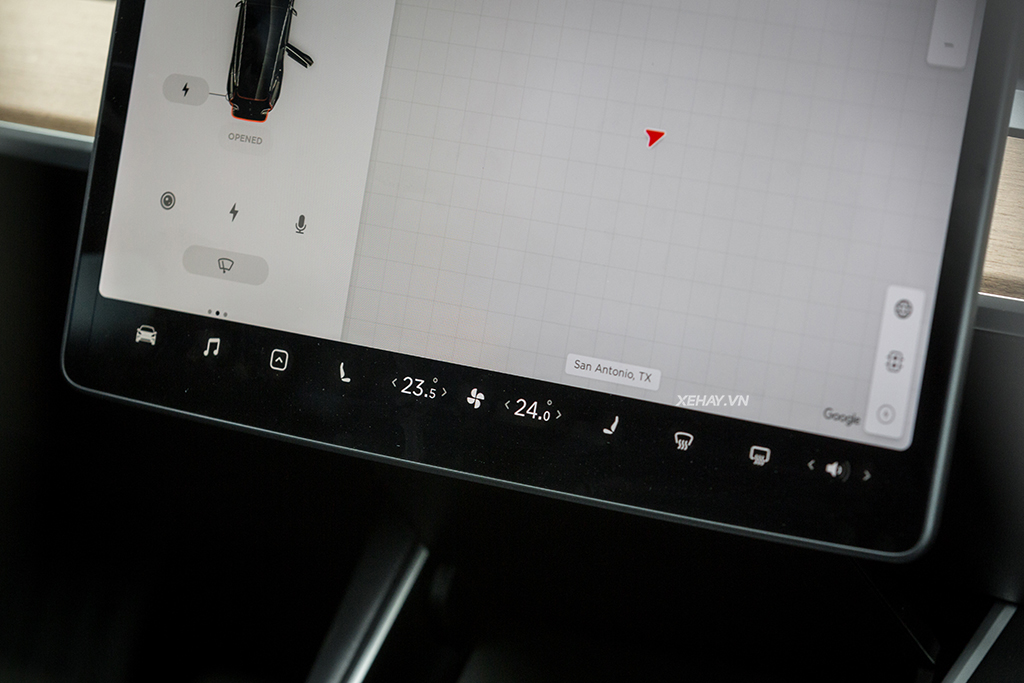 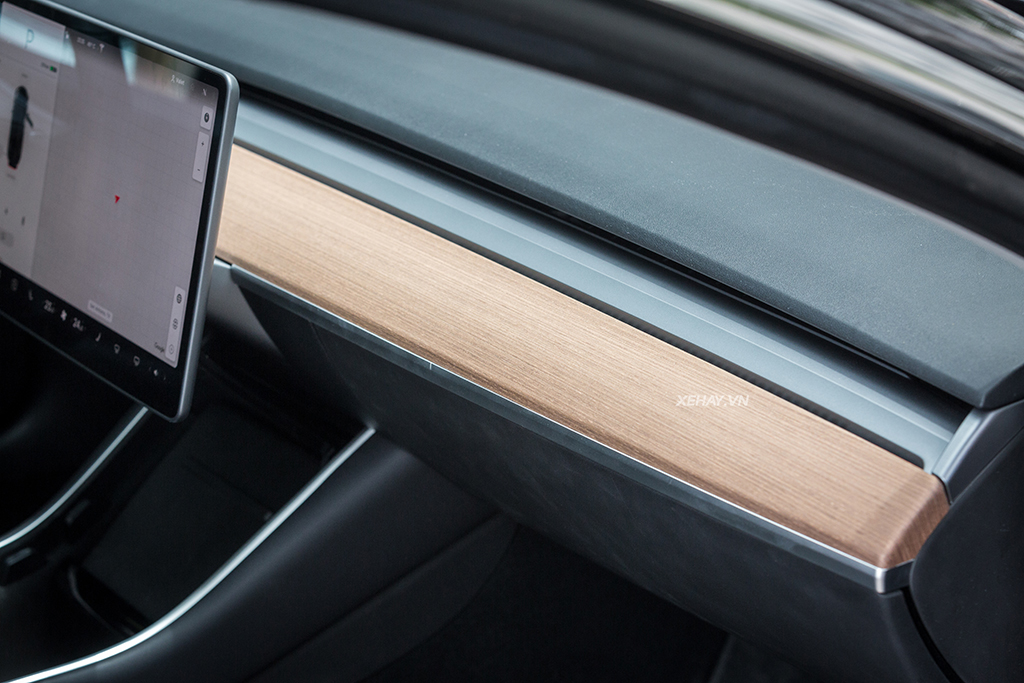 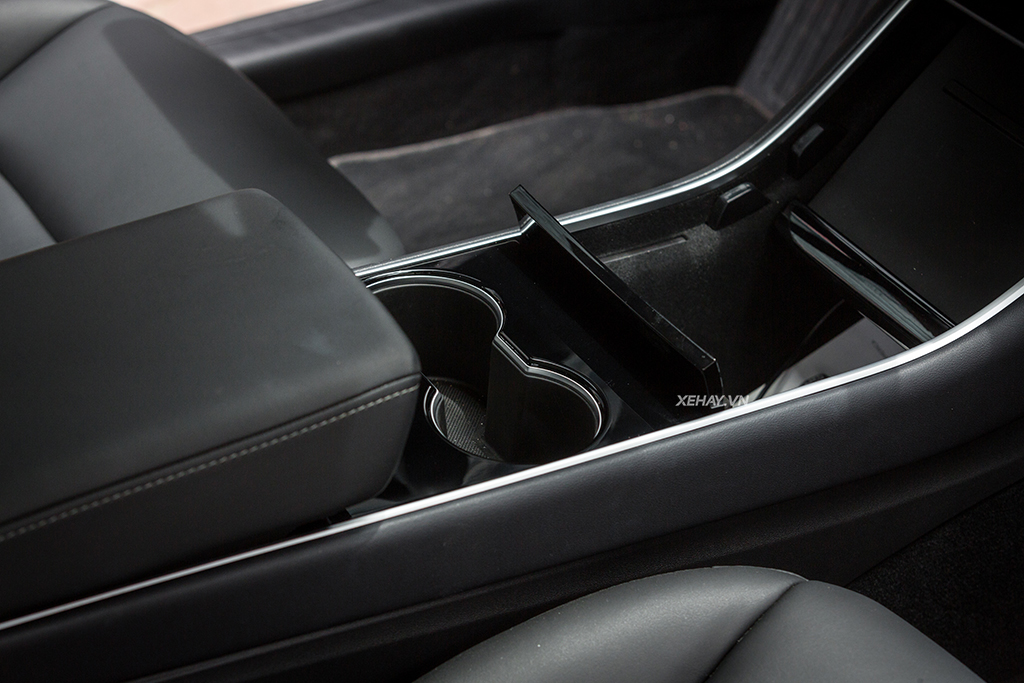 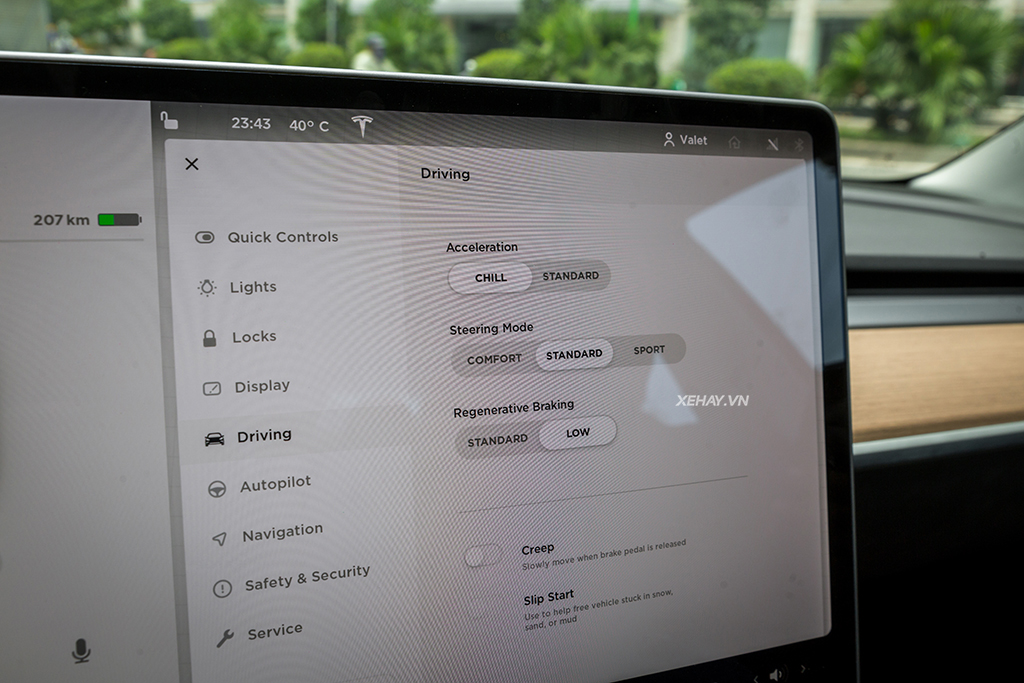 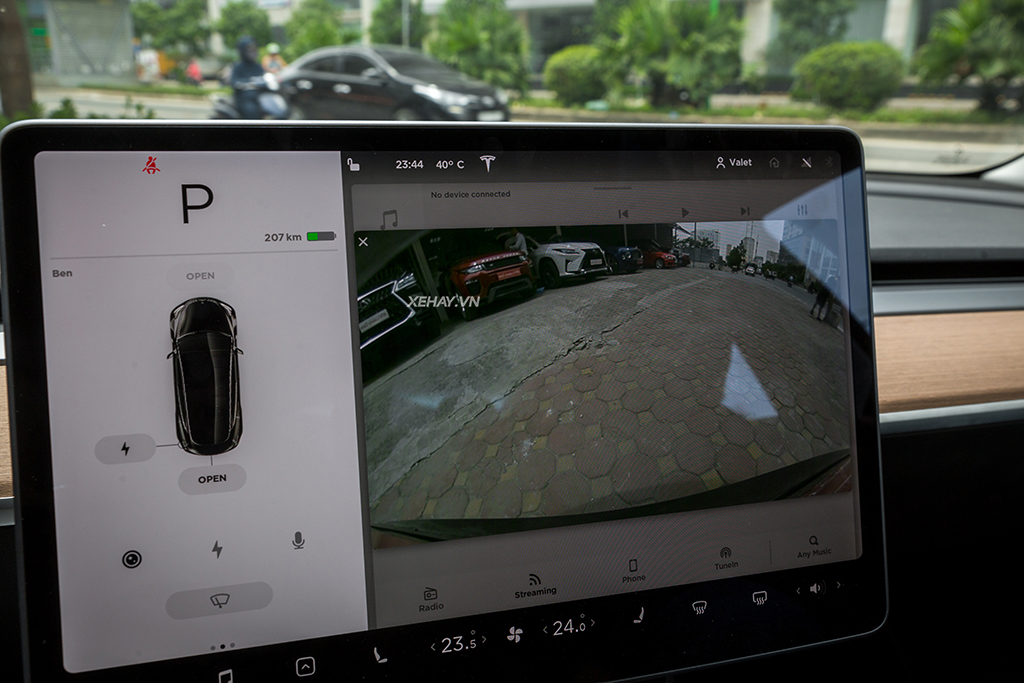 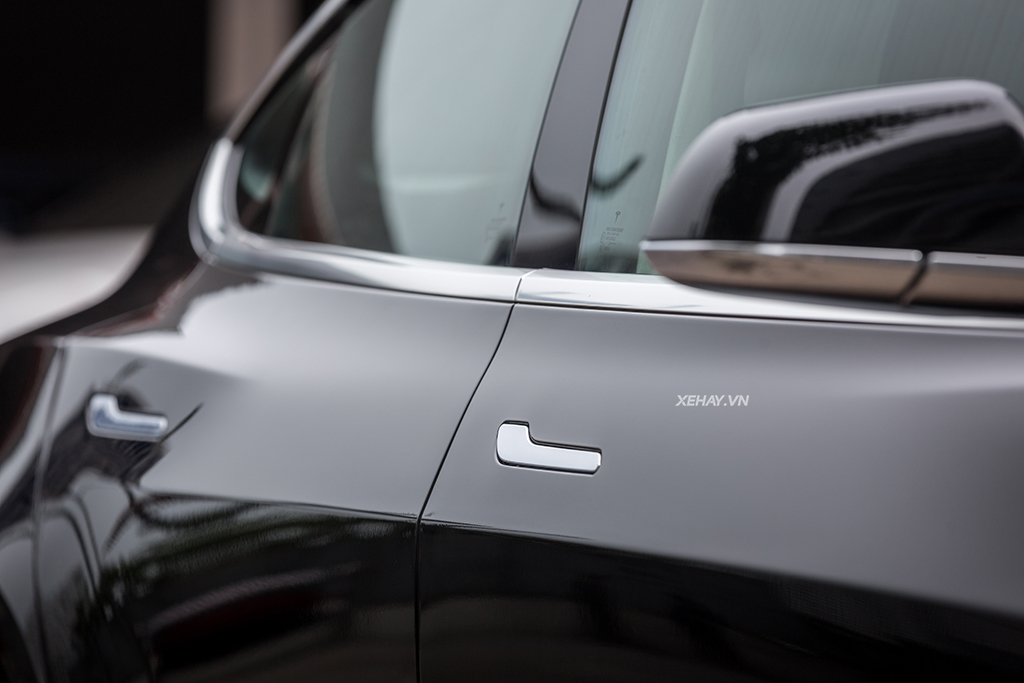 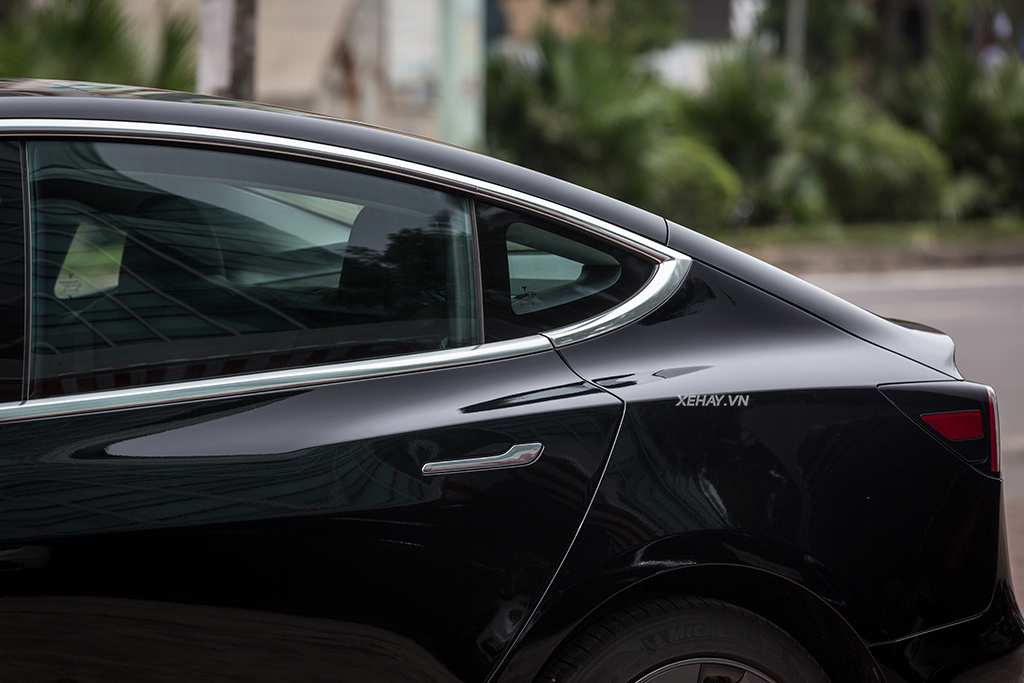 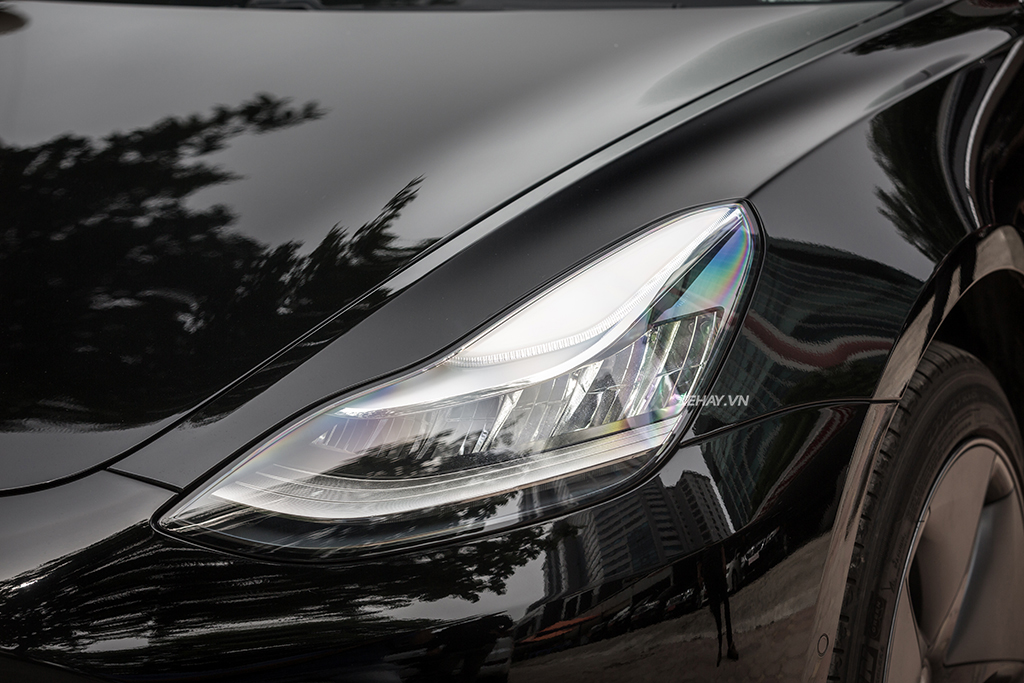