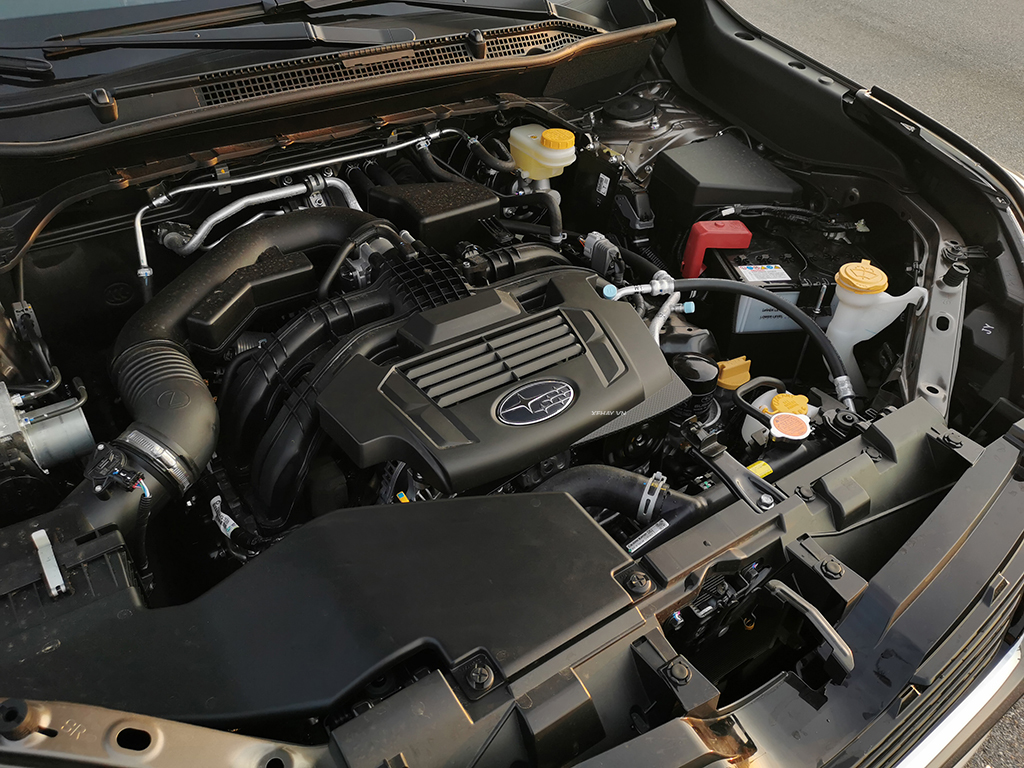 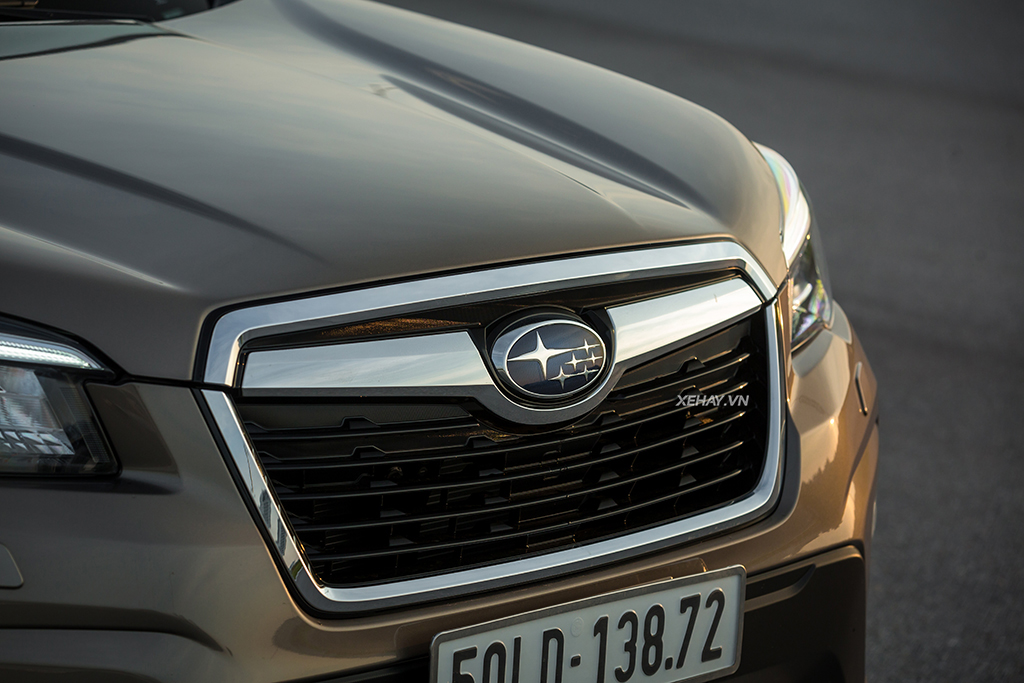 Another important advantage of the Boxer engine is that due to the horizontal cylinder, the engine has a lower center of gravity, dragging the center of the vehicle low. The engine is the heaviest component on a vehicle, so putting it as low as possible improves the vehicle’s performance. With a low center of gravity, the car makes cornering smoother, faster, and the steering feel is also greatly improved. Forester Boxer engine block is also designed to slide under the car instead of crashing into the cockpit in the event of a collision. Therefore, vehicles equipped with Boxer engines will be safer than vehicles using inline engines. 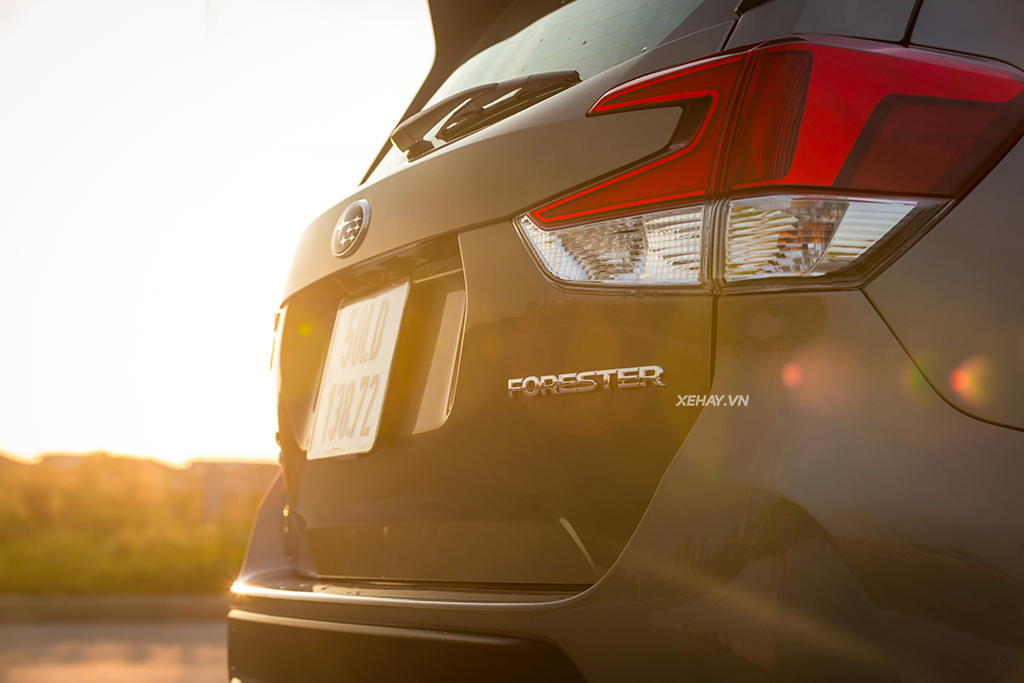 Subaru Forester 2019 is equipped with a naturally aspirated boxer engine that produces a maximum capacity of 156 horsepower and 198 Nm of torque. This figure is not as impressive as Honda CR-V or Mazda CX-5 version 2.5. We will explore what Subaru Forester can do with “only” 156 horsepower in real-world experience. 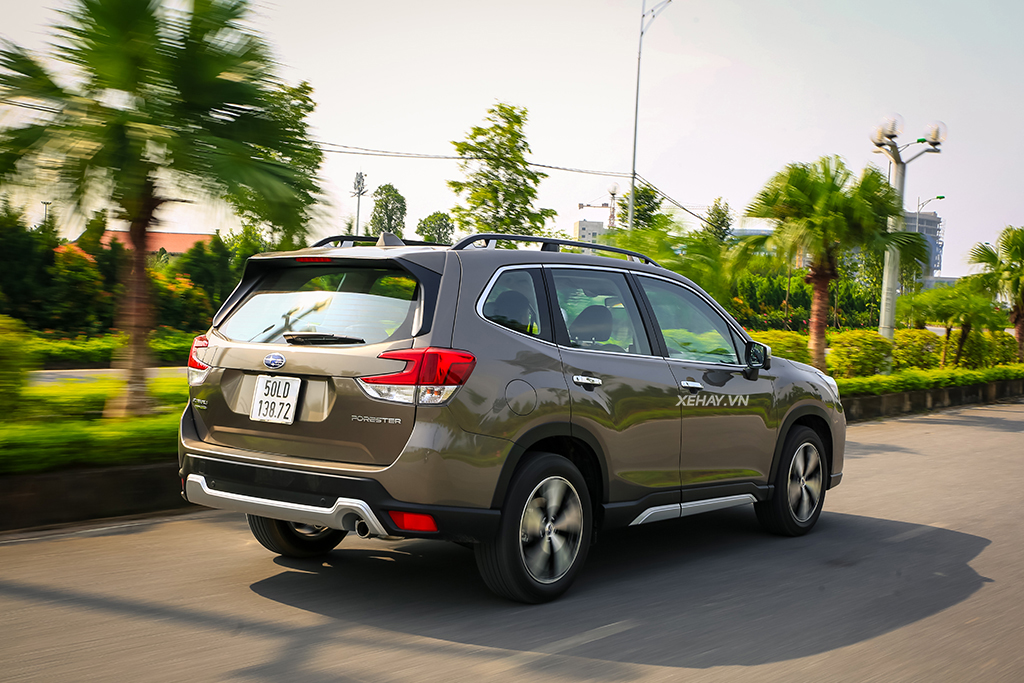 The Subaru Global Platform chassis also improves both performance and passenger safety. The new chassis has 50% better torsional rigidity than the old Forester chassis and can absorb up to 40% better impact force. In terms of performance, a firmer chassis platform will make the car better cornering. And yet, Subaru Global Platform also has the ability to eliminate vibration 50% better than the old chassis system, bringing comfort to passengers on the vehicle. 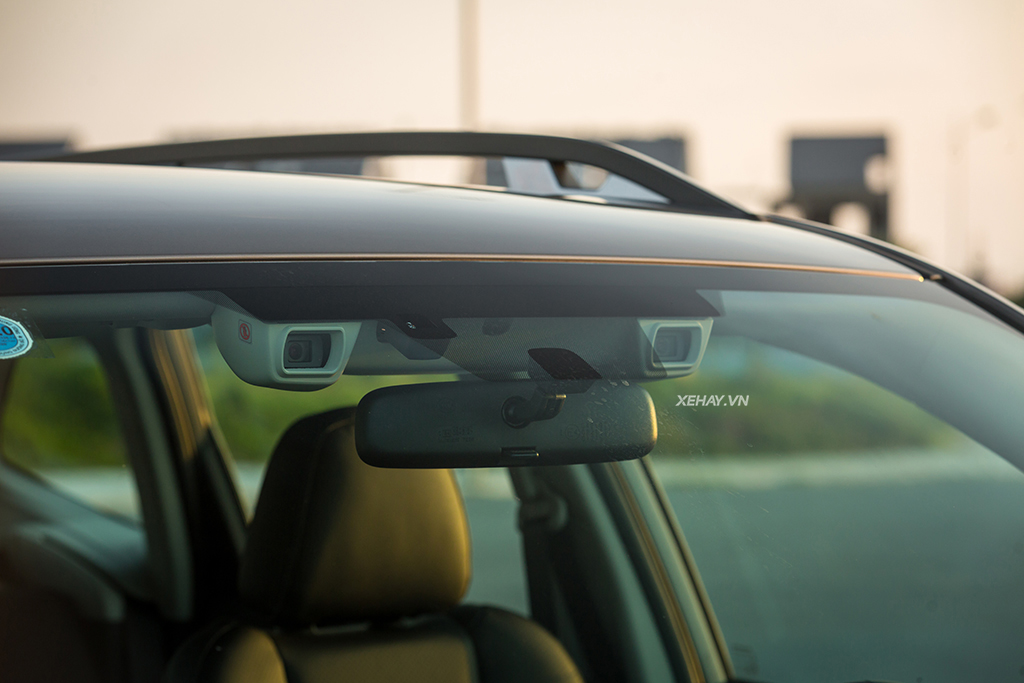 The ultimate technology solution that creates Subaru’s unique experience is a safety technology package Eye Sight. The system consists of 2 3D cameras operating in parallel. They also collect images of the front of the vehicle and measure the distance of the vehicle in front by comparing the parallax of the two images that the two cameras receive. Because of the way the eye works, the system is named EyeSight. Subaru is the only car manufacturer to adopt such a dual camera. The advantage over single camera of other carmakers is that they reflect faster and have higher accuracy. 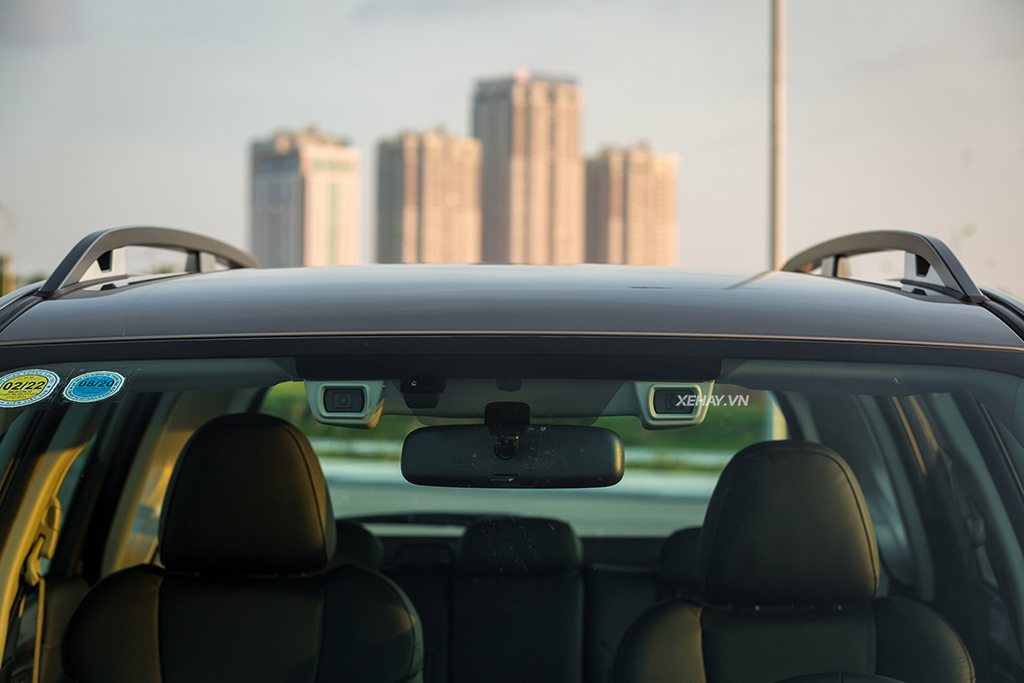 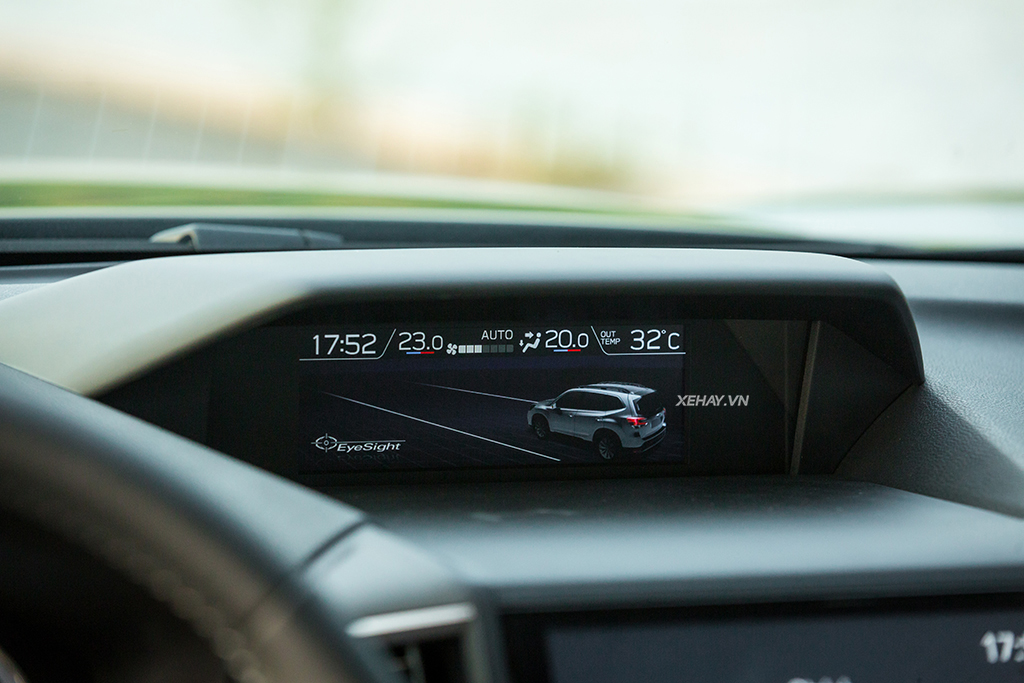 The most significant feature of EyeSight is the ability to support automatic braking when there are obstacles (Pre-Collision Braking). This feature works best if the relative speed between two vehicles is below 50 km / h and between vehicles and pedestrians below 35 km / h. Above the speed limit, the system still works as hard as possible to reduce the impact force. Pre-Collision Braking works with 3 level steps. Level 1 is Warning: When a target in front of the vehicle is determined to be dangerous, it will be displayed on the screen behind the steering wheel, while short beep sounds to alert the driver. 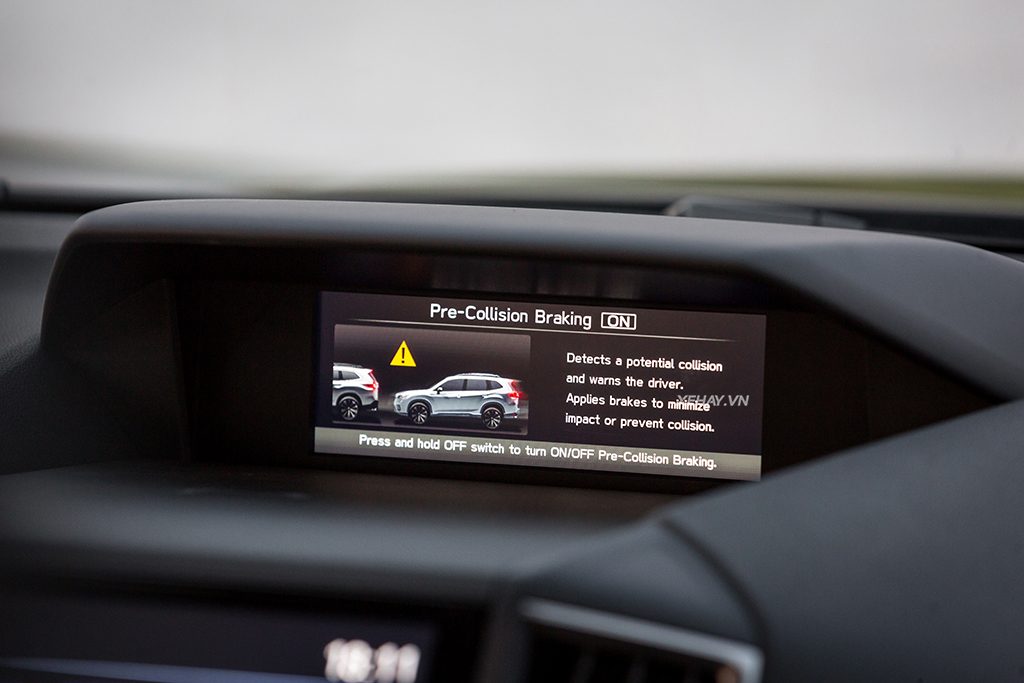 Level 2: Brake assist for the first time: When the target is determined to be dangerous and there is a high risk of collision, the computer will activate the first brake with moderate force, while still warning on the screen behind the steering wheel. and audible alerts. If the driver kicks heavily on the brake pedal and steers the steering too much, the computer will understand that the driver is in control of the situation and will turn off the brake assist feature. 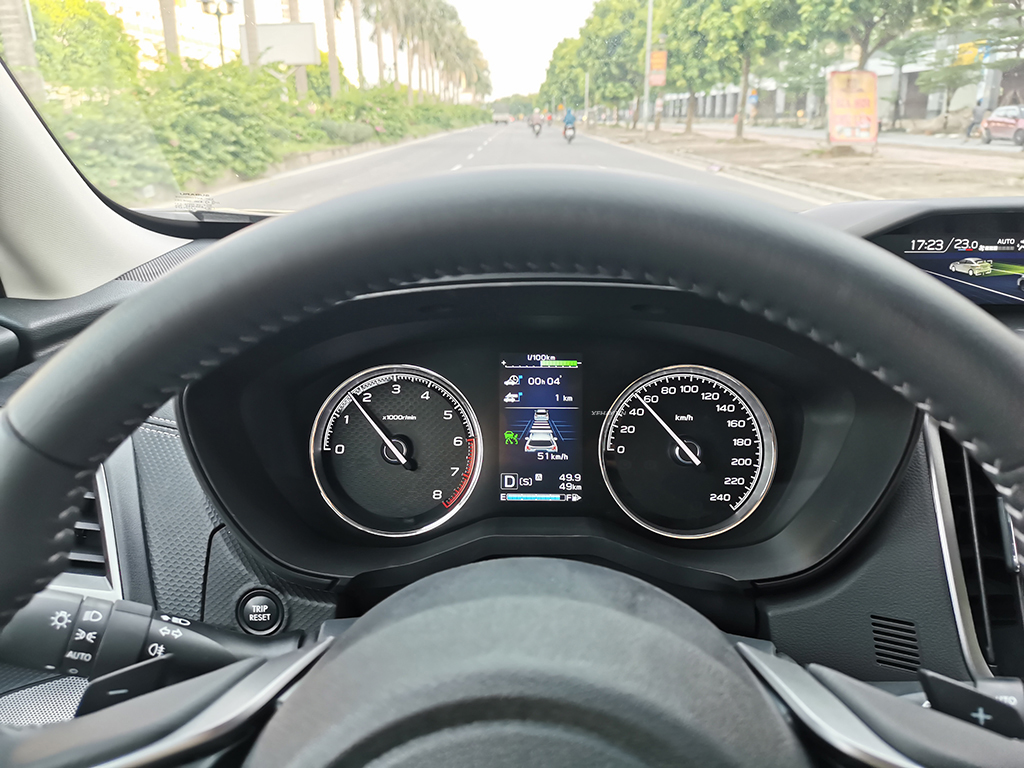 Level 3: Second brake assist: When the risk of a collision is very high, the computer will use maximum braking force to prevent or limit the collision, accompanied by a continuous beep. When the driver has strong pedal action or sharp throttle, the system will determine that the driver is in control and have dodged action and the automatic brake will not be activated so that the driver is fully active. control the car. 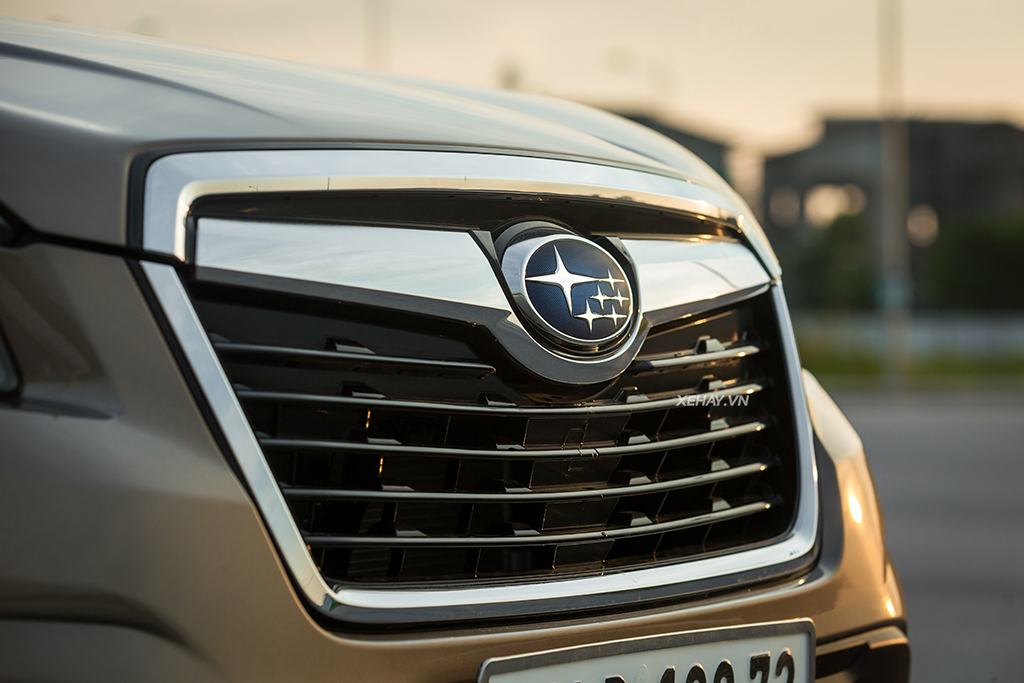 Thus, the final point is: EyeSight will always give priority to the driver to take the initiative in situations and only interfere in the last moments. EyeSight is a collision mitigation system, not a miracle. Drivers still need to focus on driving, avoiding dependence on EyeSight. Conditions that may interfere with EyeSight’s accuracy: heavy rain or heavy fog, night-ahead vehicles without turning on lights, subject to sudden overtaking, etc. Special attention should be paid to the camera EyeSight’s hologram is very sensitive so absolutely do not clean the camera, do not place, paste obstacles on the top of the dashboard and steering glass and replace the steering glass when broken or cracked so that the camera works correctly.

Experience – numbers are not everything 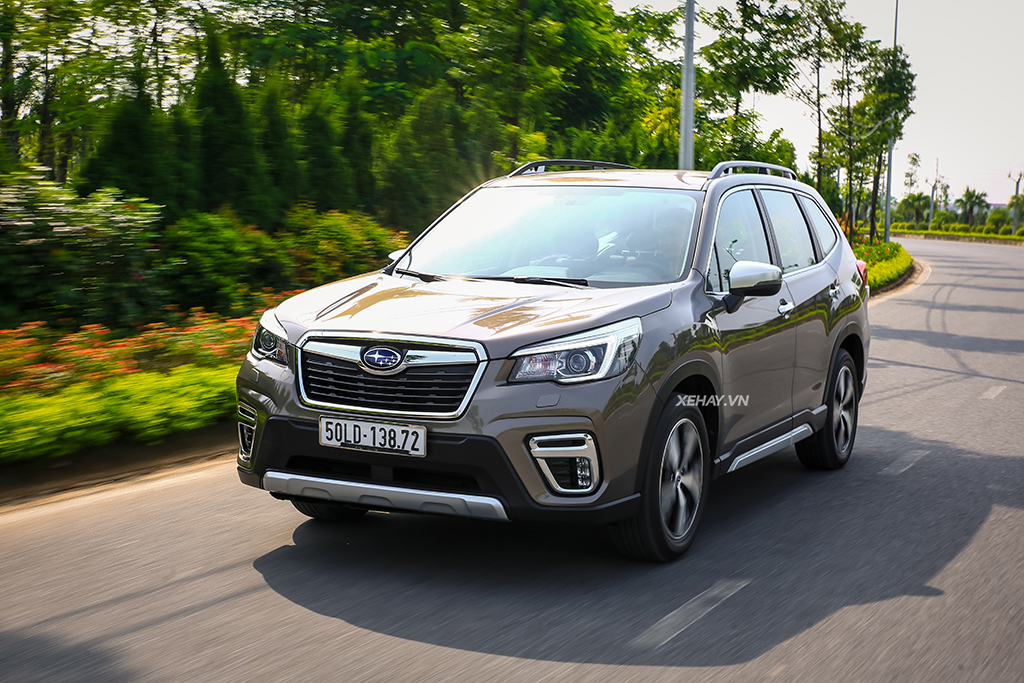 I had a chance to directly test the acceleration of Subaru Forester, Honda CR-V and Mazda CX-5 on the track and in fact, Forester is the slowest car. However, not many people drag and drag these bulky crossovers on the street. Roads are actually a collection of bends, potholes, dirt, crushed stone, and the smoothness of a car on a bad road or the balance of a corner is more important than acceleration, Especially for a family car. 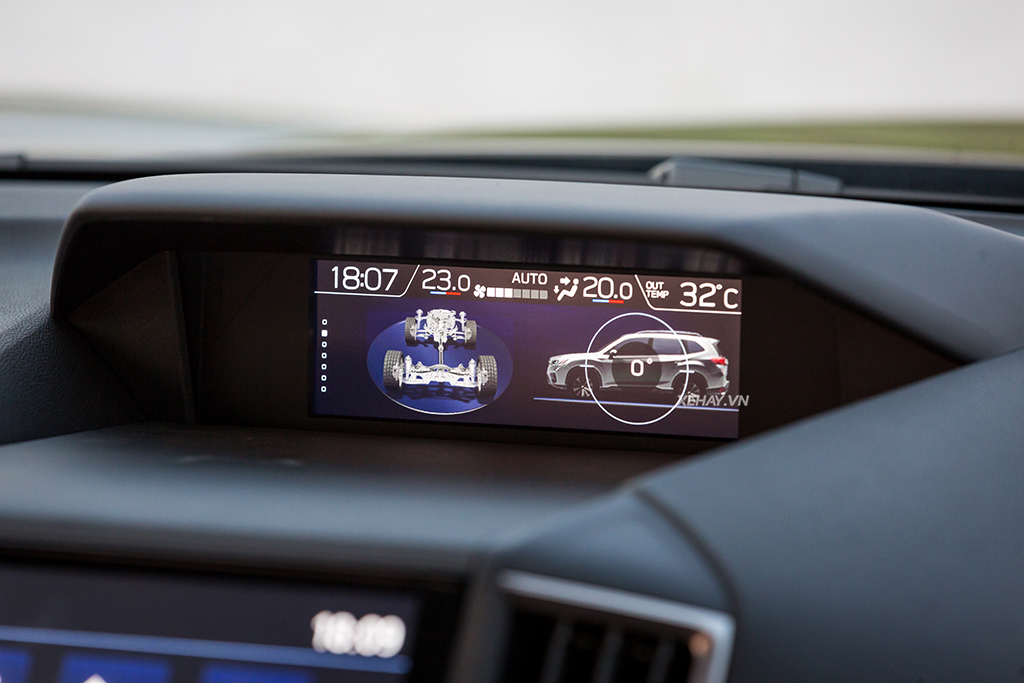 I assert that Subaru Forester is the best driving car in the segment at the present time. My previous experience with Forester at the Lihpao Racing Park, which was a go kart race with endless turns of left and right, proved that this is the CUV model for the “best” driving experience in the segment. . Now, running Forester 2019 on Vietnam road, the more I feel my judgment is correct. The car overcomes all defects on the road surface with certainty and sound “thud, thud” stocky, feels like a European car. The chassis is much stiffer plus the rear stabilizer bar attached directly to the chassis has brought great balance. 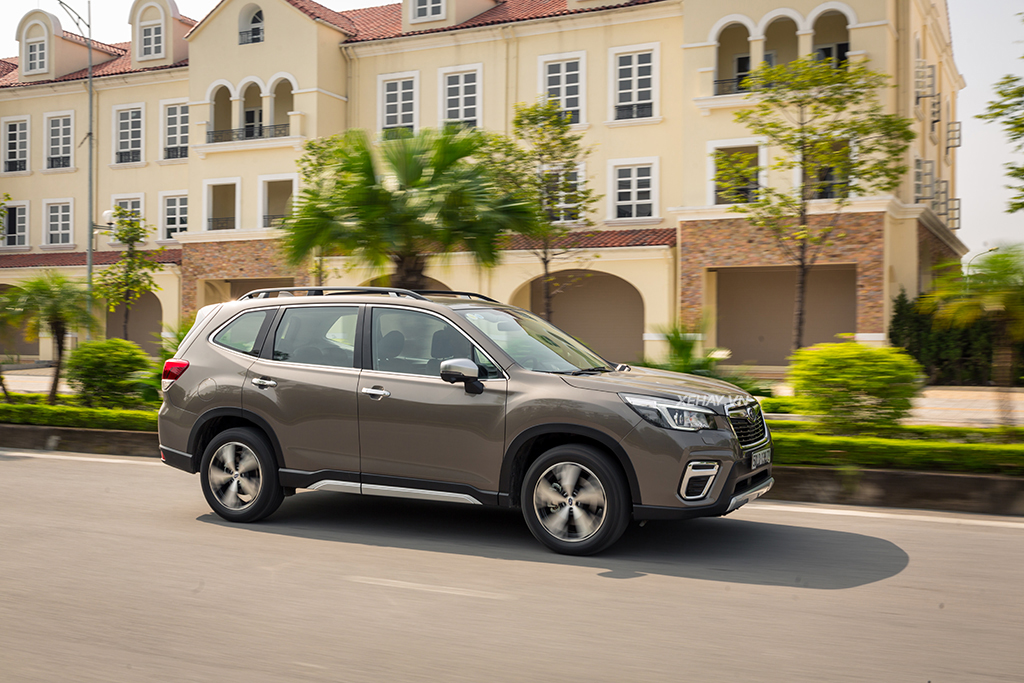 Subaru Forester’s soundproofing is not inferior to any model in the segment, although Bridgestone Dueler tires are not the smoothest tires. Subaru Forester’s soundproofing and smooth ability is further shown when entering the gravel road or dirt road. Honestly, we rarely drive on such bad terrain but when necessary, Forester is ready to accompany you anywhere with a solid chassis and intelligent 4-wheel drive system. The ground clearance of the car up to 220 mm also makes you eliminate the worry of roaring. 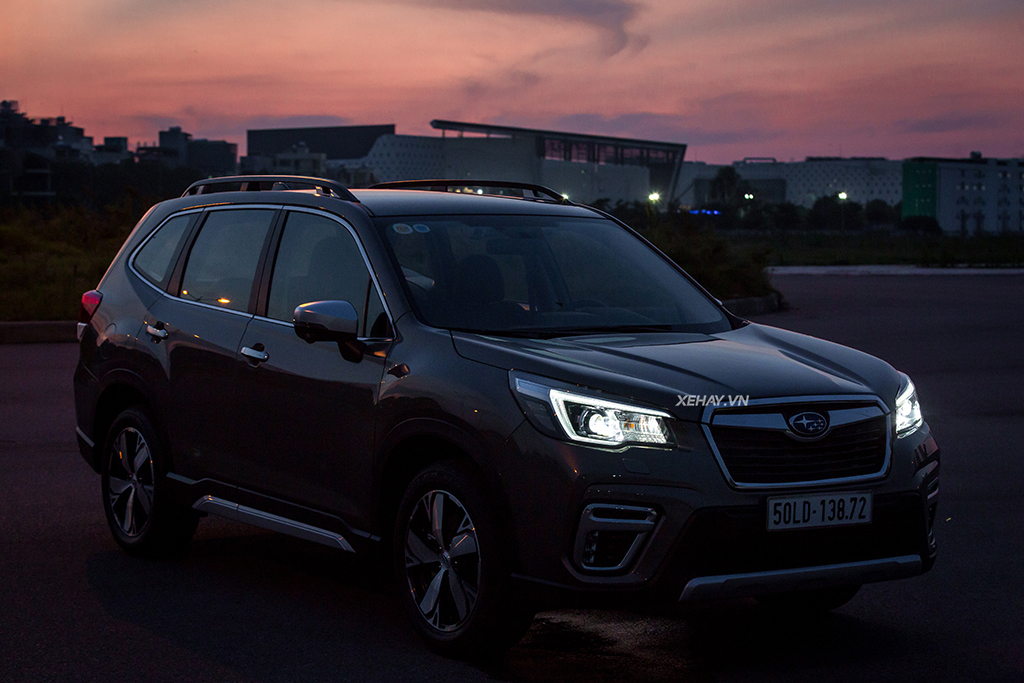 The 4-wheel drive system is not only useful when off-road, but it also gives you confidence when cornering at high speeds. In fact, not many people go on the road and cornering at a speed that can make it difficult for Subaru Forester because with the torque distributed evenly on all four wheels, the limit of traction force of Forester is very high. You can confidently hug without cornering like the previous CUV models. The low-center Boxer engine block also makes the car capable of cornering very well. Really, you have to try it to believe that a CUV from Japan is that good to drive! 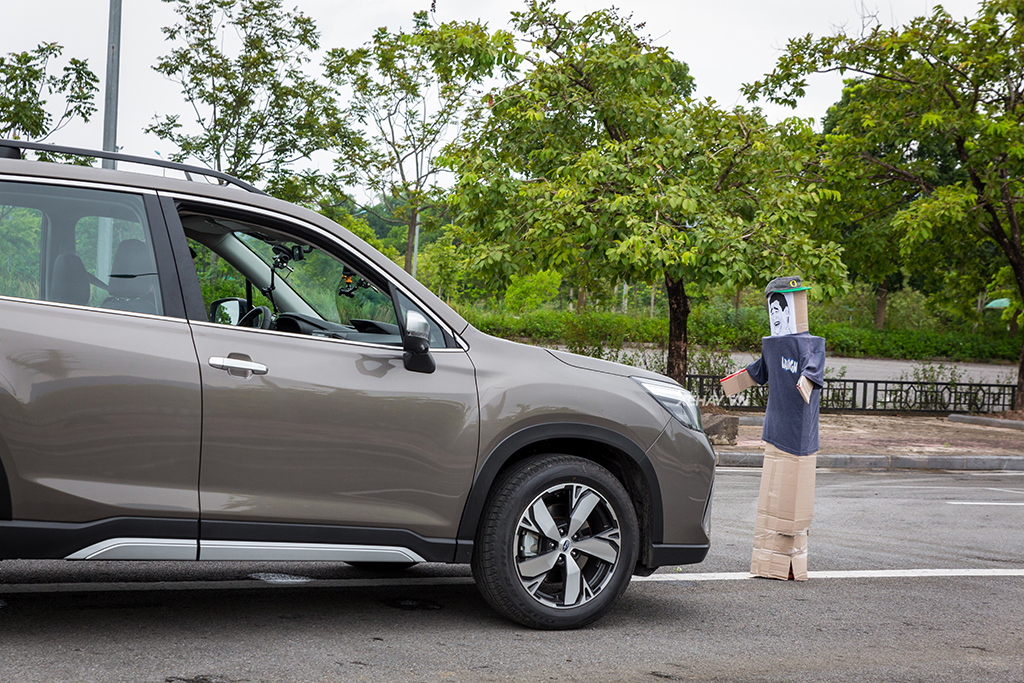 Another good thing that cannot be ignored is the EyeSight system. We used a scarecrow to test the Subaru Forester’s ability to automatically brake with EyeSight. As a result, the car brakes very effectively at speeds below 35 km / h if the target in front of the vehicle is a pedestrian, if the front goal is a moving vehicle, the ability to brake itself will be most effective if the difference speed between 2 vehicles is under 50 km / h. The Adaptive Cruise Control feature also works very well. Subaru Forester can tailgate the vehicle in the front, even stopping completely if the vehicle in front of you stops at a red light. What I like most is the intervention of the accelerator pedal and brake pedal of ACC is very smooth, smoother than the similar system of Volvo. 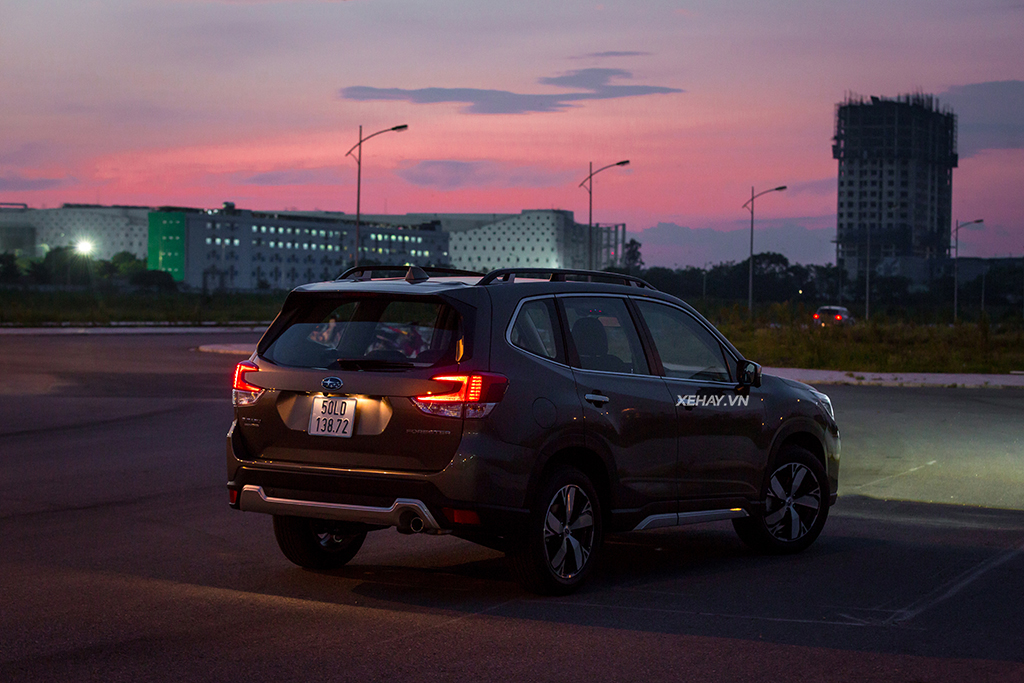 Most Vietnamese know a lot about Honda CR-V, Mazda CX-5 or Hyundai Tucson or more advanced brands like BMW or Mercedes-Benz. However, the days of experiencing Subaru Forester in real-life conditions in Vietnam have changed my opinion completely, because actually, Subaru Forester has never been my choice if I needed to buy one. the car roared high. The 2.0 engine block is naturally loaded with gas, the symmetrical all-wheel drive system makes me feel confident to drive and EyeSight is a perfect safety net. Subaru Forester 2019 is completely worth the 1.2 billion price for the most advanced version.