[ĐÁNH GIÁ XE] Mercedes-Benz E300 AMG after 2 years of use – Will assembly cars have “diapers”? 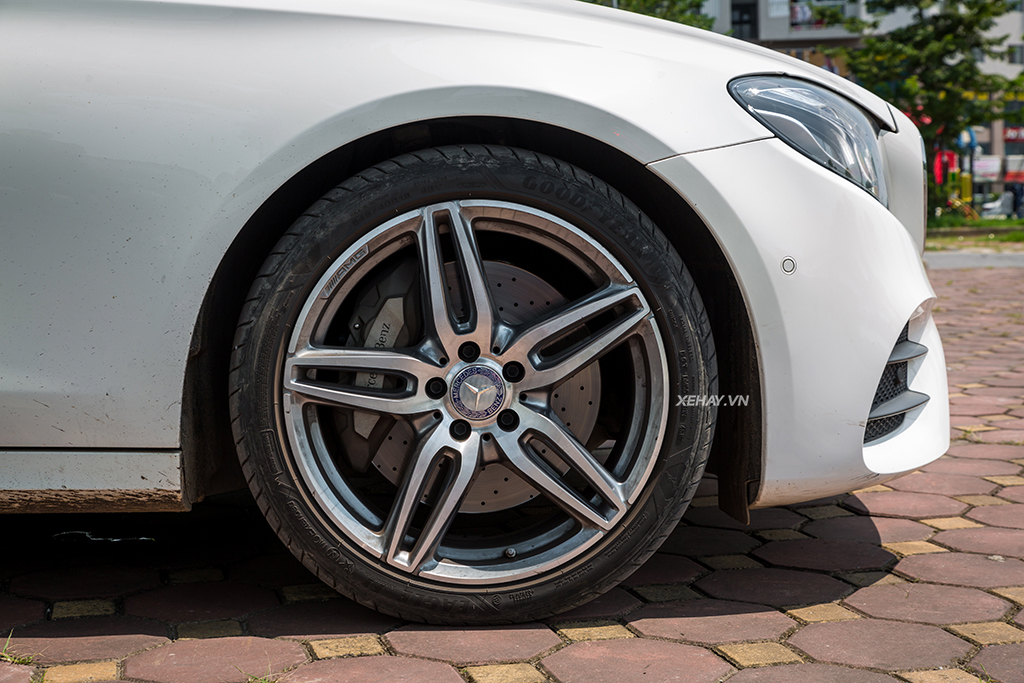 Another noticeable difference is that the assembled E300 AMG has a single-color 19-inch AMG rim, while the imported rim has the same design but is painted in two contrasting colors. In general, the criteria of exterior finish between the assembled and imported E300 AMG are almost similar. Even, I personally find assembled cars are superior to imported cars after 2 years of use in Vietnam. Besides, there are better equipment on the assembled E300 AMG, such as the Multi Beam lamp cluster. 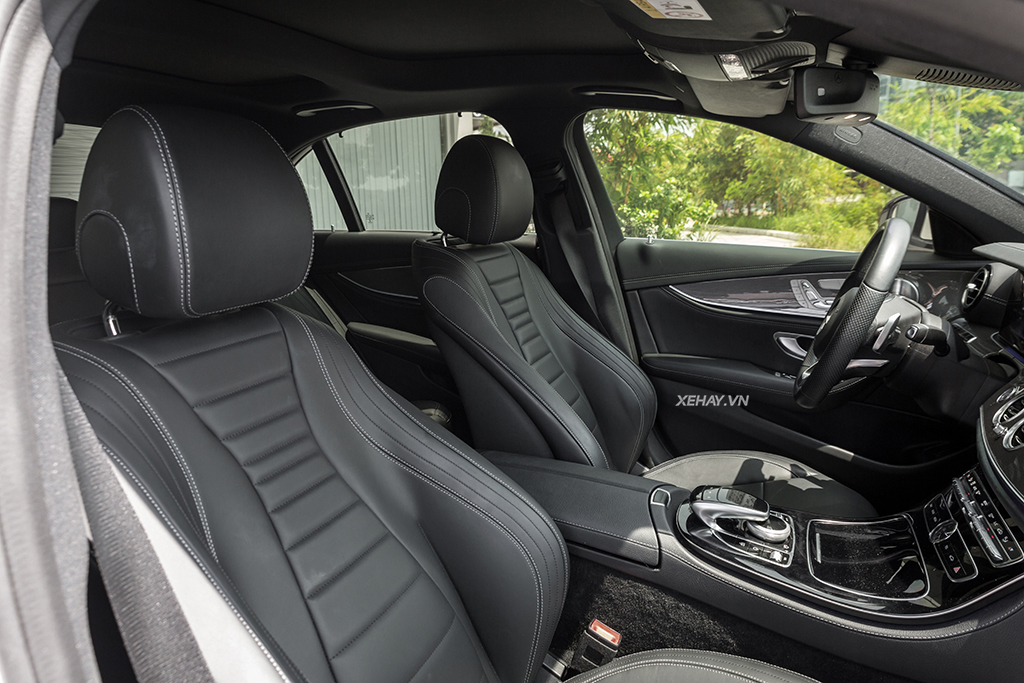 The interior compartment of the Mercedes-Benz E-Class deserves many compliments that experts try domestic and foreign cars for this model. I personally am a “BMW fan” but I still have to admit that comparing the interior of BMW Series 5 G30 and E-Class W213, especially the versions being distributed in Vietnam, the E-Class still feels Feel more luxurious both aesthetic and functional. It took Mercedes engineers exactly 4 months to shape the interior of the E-Class with clay. They were extremely meticulous and did not race against time. The result is an interior compartment that possesses all of the company’s traditional strengths: beautiful design, superior materials and overwhelming comfort. 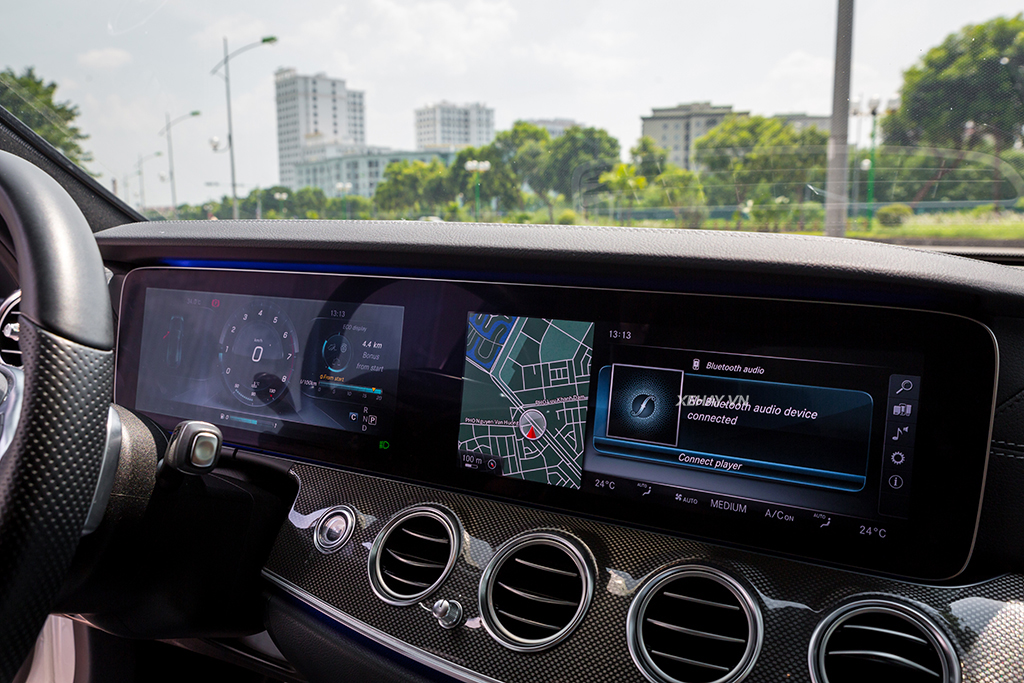 Going back to the two assembled and imported Mercedes E300 AMG, the differences in interior are not much. The CBU version comes with an Air Balance perfume pack, while the assembly is slightly better in terms of assisting the driver with HUD. Personally, I would appreciate HUD more than perfume because it makes driving more leisurely and safer, helping the driver to glance down at the dashboard to grasp the vehicle’s basic operating parameters. Moreover, if you really want the Air Balance perfume for your locally assembled E300 AMG, just spend about 20 million, there are many toy car shops will do it. Thus, in terms of equipment, the 2 E300 AMG assembled and imported are quite similar, so what about the durability of leather and plastic details? 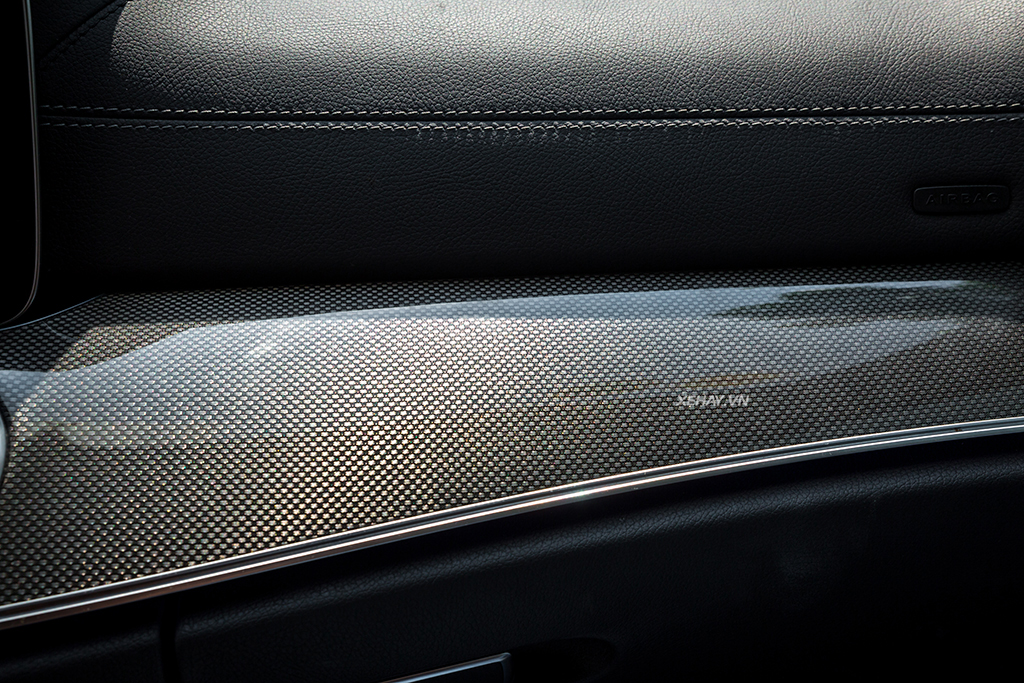 In the cabin, the part most likely to age by the sun is the top of the dashboard. This is the location to receive the midday sun and we can’t black the driver’s glasses. The good news is that on both test vehicles, the leather top cover is still new, remains soft and does not fade. This shows that the quality of Mercedes-Benz dashboard covers is very good. 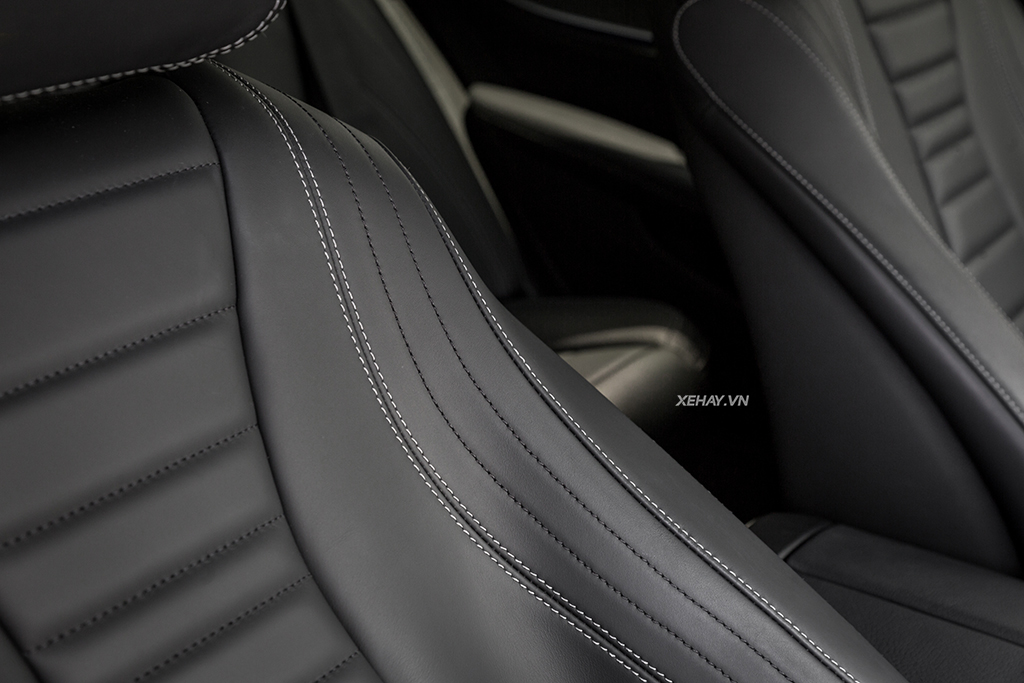 Another point I also noticed on these 2 cars is that even though the sun is very long but when opening the door, I did not feel unpleasant smell in the car. That is the characteristic of luxury cars. Expensive car manufacturers are often very careful when choosing leather materials, plastic in the car to limit unpleasant odors. Referring to the smell, I continue to appreciate the Nappa leather upholstery. The leather upholstery remains soft and retains a slight aroma like the new car and most importantly, the positions that are frequently impacted on the driver’s seat are not crushed or wrinkled. Of course, we need 3, 4 more years to accurately assess the Nappa leather durability on the E300 AMG, but after 2 years of use, the leather upholstery of both cars in the comparison is perfect as new. 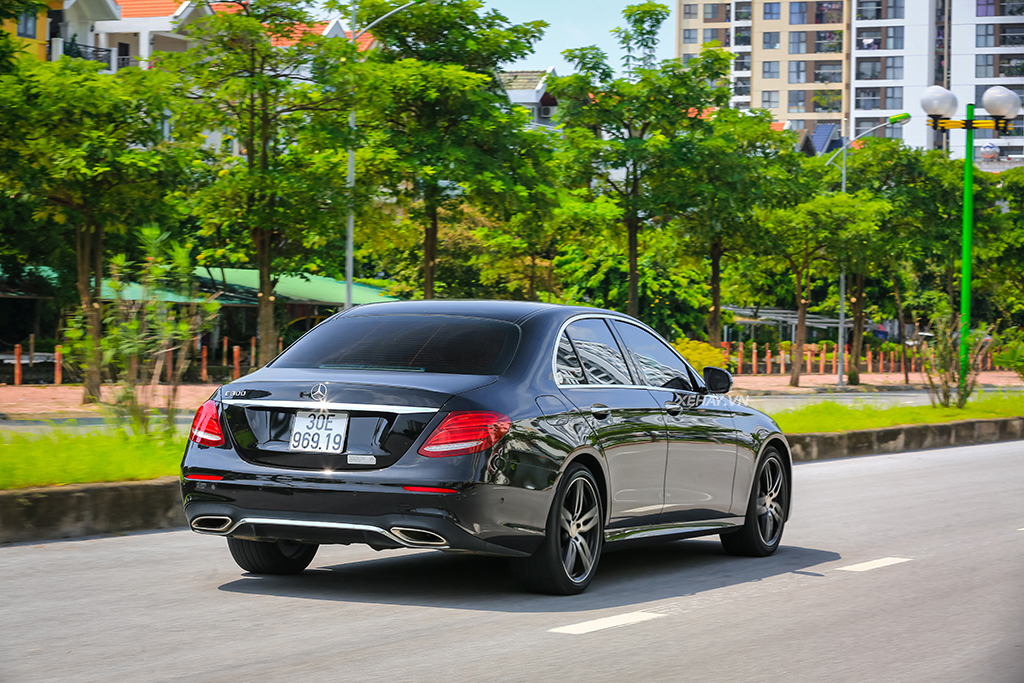 Thus, both assembled and imported Mercedes E300 AMG cars have passed the aesthetic test. In terms of experience, these 2 cars are no different after 2 years of use and 1.5 thousand kilometers rolled?

Let’s take a look at the specifications of these 2 models. E300 AMG is equipped with turbocharged 4-cylinder engine, capacity of 2.0 liters. This engine produces 244 horsepower at 5,500 rpm and maximum torque of 370 Nm at 1,300 – 4,000 rpm. Traction is transmitted to the rear wheel via a 9G-TRONIC 9-speed automatic transmission. In theory, it takes 6.2 seconds for the Mercedes-Benz E300 AMG to accelerate to 100 km / h before reaching a top speed of 250 km / h. The car has 5 driving modes: Eco, Sport, Sport +, Comfort and Individual. 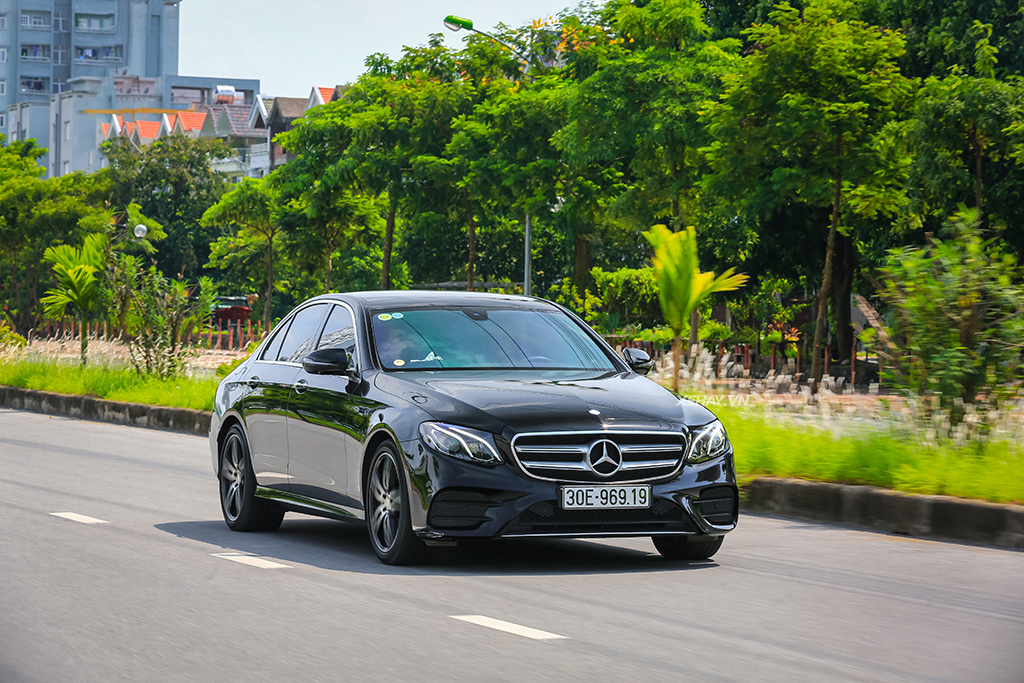 When measured in reality, both cars accelerate to 100 km / h in about 8 seconds. This is an acceptable parameter because the tire has been used for 2 years and the road conditions are not really good. In Sport and Sport + modes, the throttle response is relatively responsive and nearly 250 horsepower is more than enough to bring excitement behind the wheel. Even so, I could feel the turbocharged lag quite clearly despite taking the initiative to lower the gear to push the revs up. However, the chassis is still extremely sturdy when cornering at high speed with the phenomenon of well-controlled body tilt. 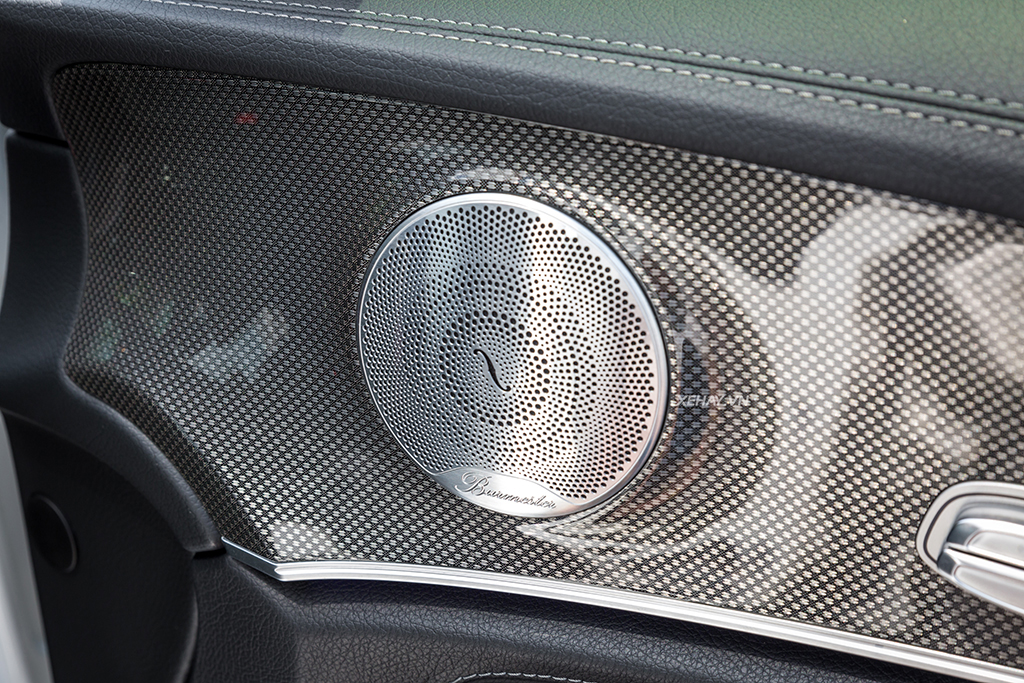 In terms of operation, both cars are no different and no exaggeration to say they still bring a driving experience like new cars. The soundproofing ability of the E300 AMG duo is also praiseworthy: just quietly shut the breath, the noisy world outside seems to disappear immediately. Losing myself to the melodious music from the branded Burmester sound system, I was immersed in a world of my own, with only me and music. In terms of comfort, I found the imported E300 AMG to have a poorer air-conditioning system than the assembled car. Despite the maximum wind level and maximum low temperature, the cabin of the imported E300 AMG is not as cool as the assembled car. This is something to note because in a hot country like Vietnam, the cooling capacity of the air conditioner system is very important. 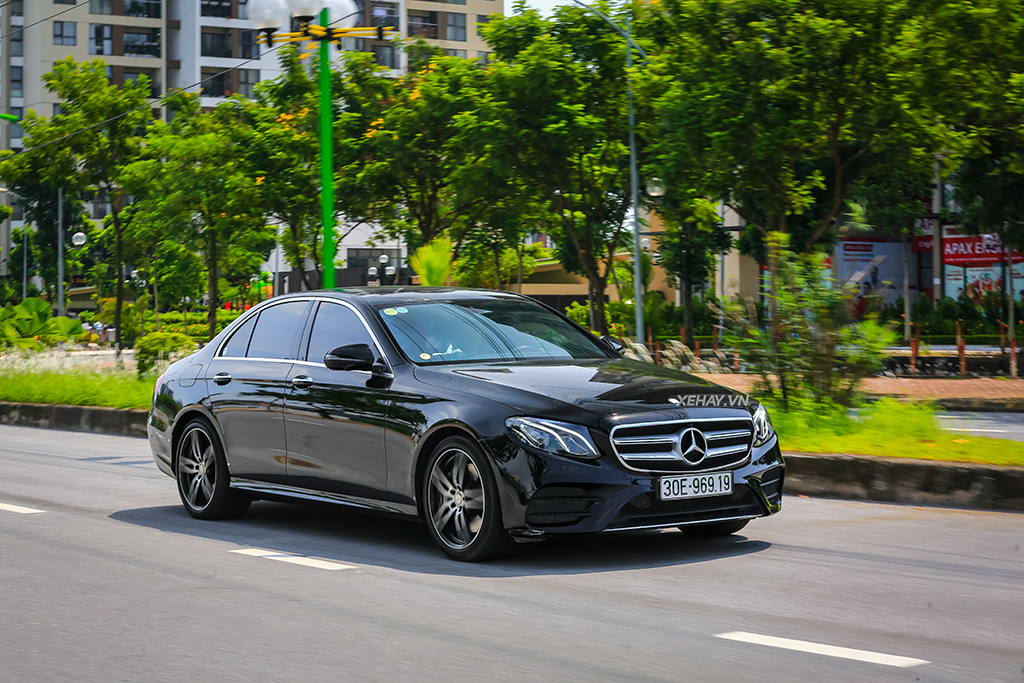 After 1 day of experience of the Mercedes-Benz E300 AMG assembly and import, I can conclude that for every objective element of mechanics, these two cars are similar. The vehicle even outperforms the Multi Beam lighting system, the display system on the steering glass and the cool air conditioner. That is not to mention the cheaper price of about 280 million. Thus, the Mercedes-Benz Vietnam assembly of domestic E-Class has brought practical benefits to domestic customers. Whether the story of imported cars or better assembled cars will continue, but for the E-Class and many other Mercedes-Benz models in Vietnam, locally assembled cars are a better choice.