The first type is Haldex-style multi-disc clutches, which often appear on models A3, Q3, TT etc. With this design, under normal operating conditions, 95% of engine torque is transmitted to the front wheels, while the rear wheel receives almost no power at all. The Haldex multi-plate clutch will be locked by the ECU processor when it receives a signal that the front wheel is slipping. At that time, the maximum motor torque distribution was 50/50. ECU will decide whether the rear wheel receives 20, 30, or 50% of torque depending on how much the front wheel slips. As such, this is a system largely dependent on electronic sensors and if you drive slowly on a flat road, your Audi with Quattro is like a front-wheel drive car. 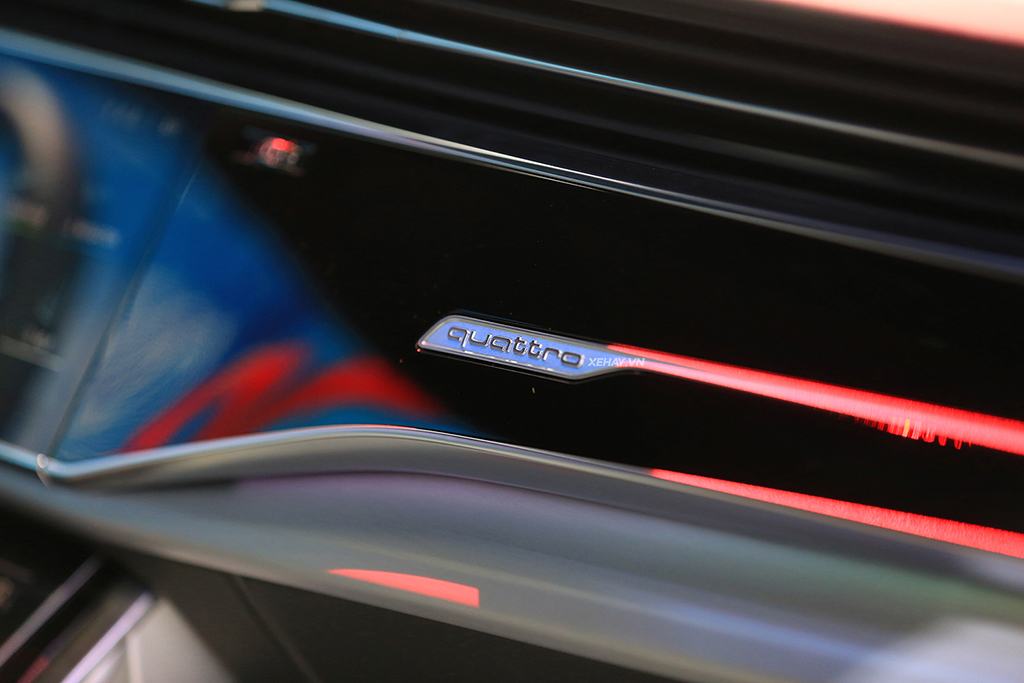 The second type is the Torsen mechanical differential. This is Audi’s most popular four-wheel drive and the Torsen-type limited center differential always works, transmitting torque simultaneously to all four wheels. Under normal operating conditions, the torque distribution ratio is 50/50 but when the front or rear wheels fail, the Torsen differential can lock itself thanks to mechanical latches and transfer up to 75% of the torque to zero gear pairs. fail. This is the Quattro model fitted to the Audi Q8, while the third is the Viscous Coupling with the ratio of torque distribution priority 2 rear wheels. It’s the Quattro style that equips sports cars like the Audi R8. 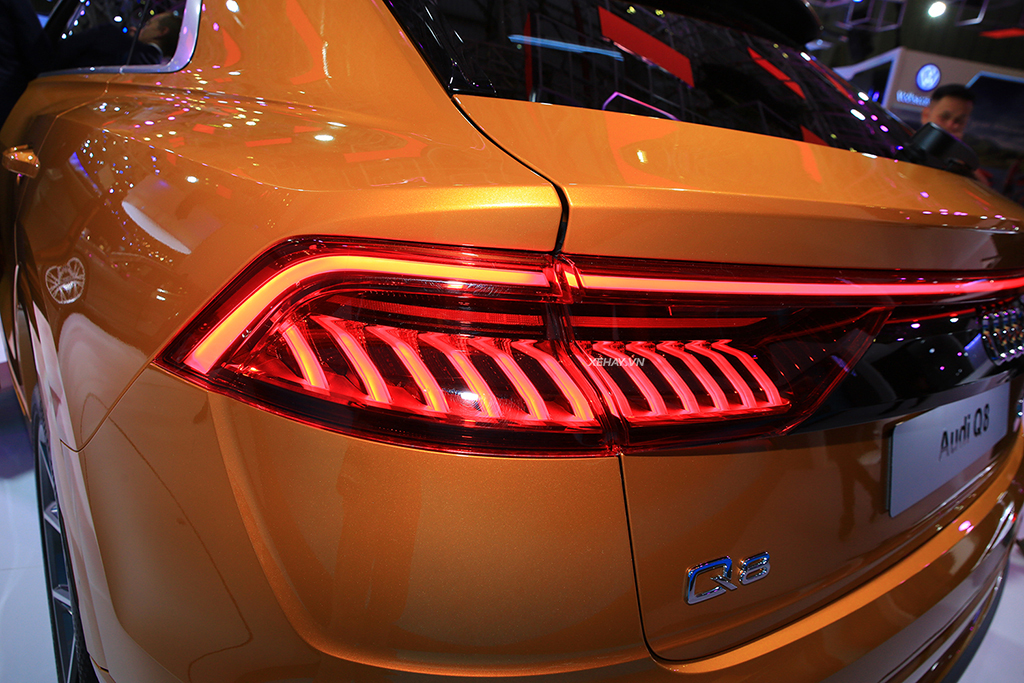 So you can be assured that the Q8 Quattro is “better” than the lower-end Audi models! After 10 years of distributing cars in Vietnam, Audi calls Vietnam “Quattro land” because most cars sold in S-shaped strip of land are equipped with four-wheel drive. It can be seen that “equating” three types of four-wheel drive systems together, combined with a single word Quattro is very effective in terms of marketing. With Q8, the Torsen-style Quattro system has a front-to-back ratio of 40/60, promising a more sporting-like experience. 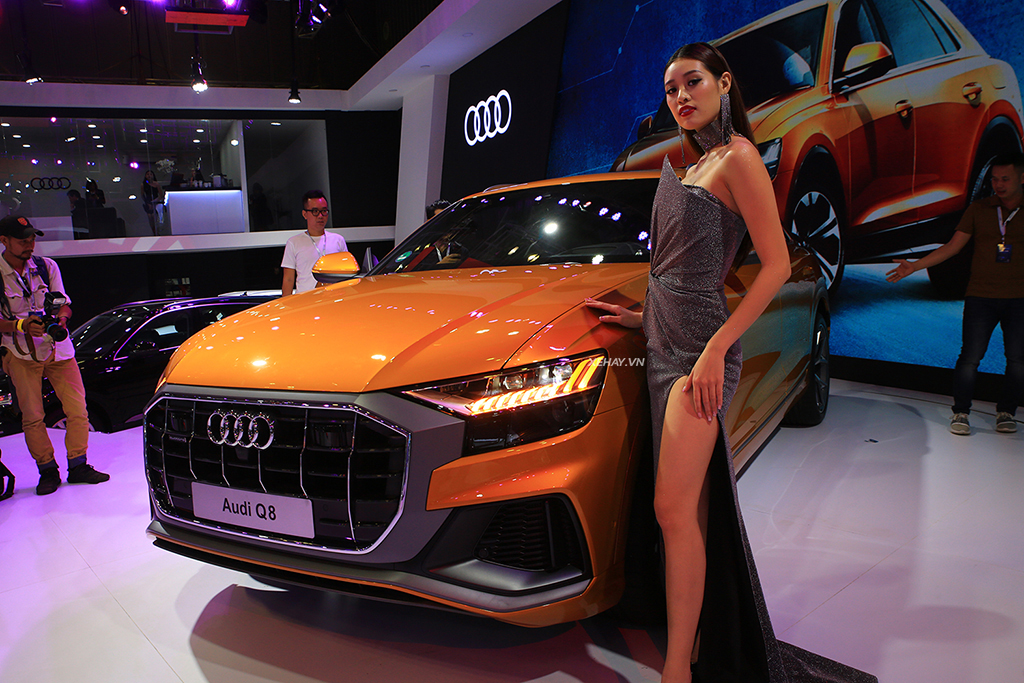 Another equally impressive technology is the auxiliary hybrid system (Mild Hybrid Electric Vehicle – MHEV). According to Audi, this technology can reduce 0.7 liters of fuel / 100 km in real conditions. The system operates with a voltage of 48V, which is 4 times higher than the current 12V standard. MHEV consists of a compact lithium-ion battery placed under the rear storage compartment with a capacity of 10,000 mAh and an electric motor mounted directly to the engine crankshaft. This small motor will simultaneously perform four functions: the starter, the generator, the brake energy recovery, and the power output to support the internal combustion engine.

The efficiency of this system is very impressive. In the speed range of 55 – 160 km / h, the system allows the V6 engine to completely shut down when the driver lifts the accelerator. Meanwhile, the Q8 can glide without producing any emissions in 40 seconds. As soon as the driver steps on the gas pedal, the motor activates the crankshaft and starts the internal combustion engine smoothly. 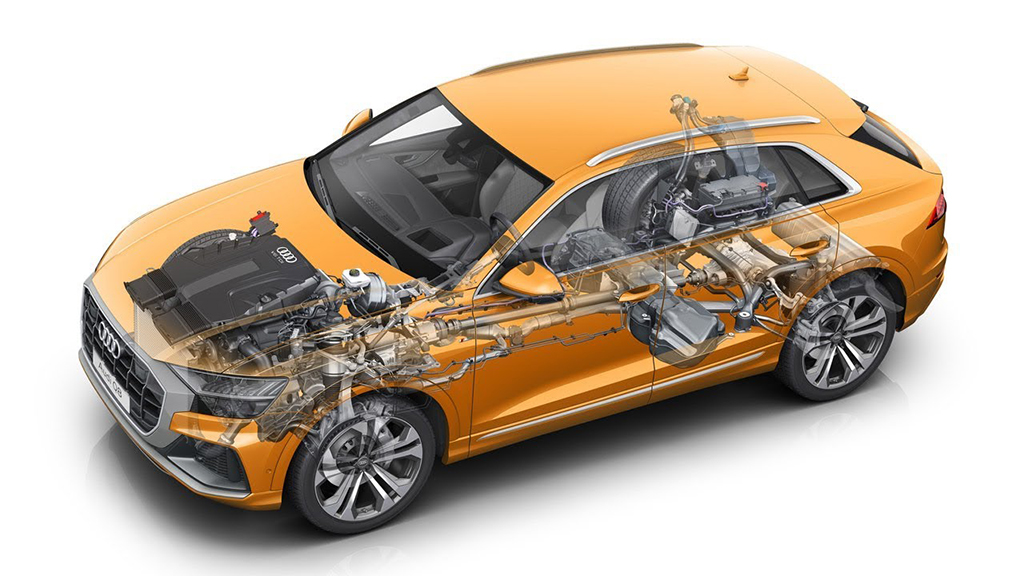 And yet, the energy that should have been wasted when you stepped on the brake was recovered by this electric motor with a maximum of 12 kW. This energy flow is recharged back into the battery in the back of the car to prepare for the engine shutdown at the next high speed range. The last feature of MHEV is that it allows the engine to stop when the red light (Start / Stop) operates at speeds up to 22 km / h. The traditional Start / Stop is only activated at almost a stationary speed, and when the traditional ignition re-activates the engine, you will hear annoying “wheezes”. 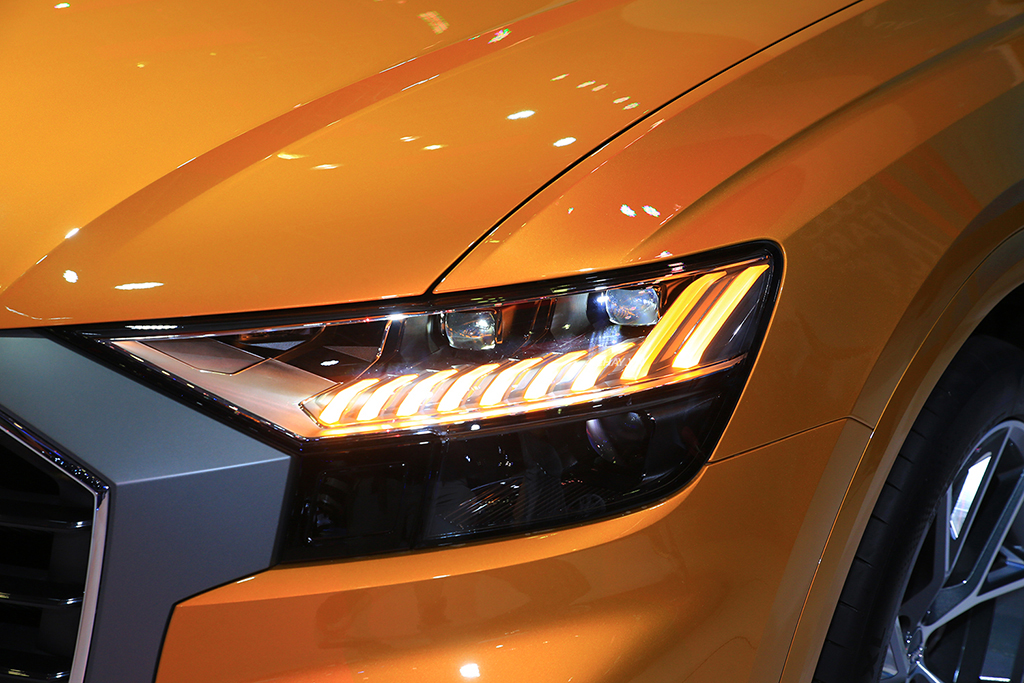 I personally always turn off Start / Stop when I get in the car because the experience with it is uncomfortable at all. However, MHEV technology will change that. This is the optimal solution that allows manufacturers to apply electric vehicle technology to vehicles using internal combustion engines without spending too much as well as avoiding the disadvantages of pure electric vehicles, typically the battery pack is very heavy. (many net battery packs weigh up to … half a ton!). 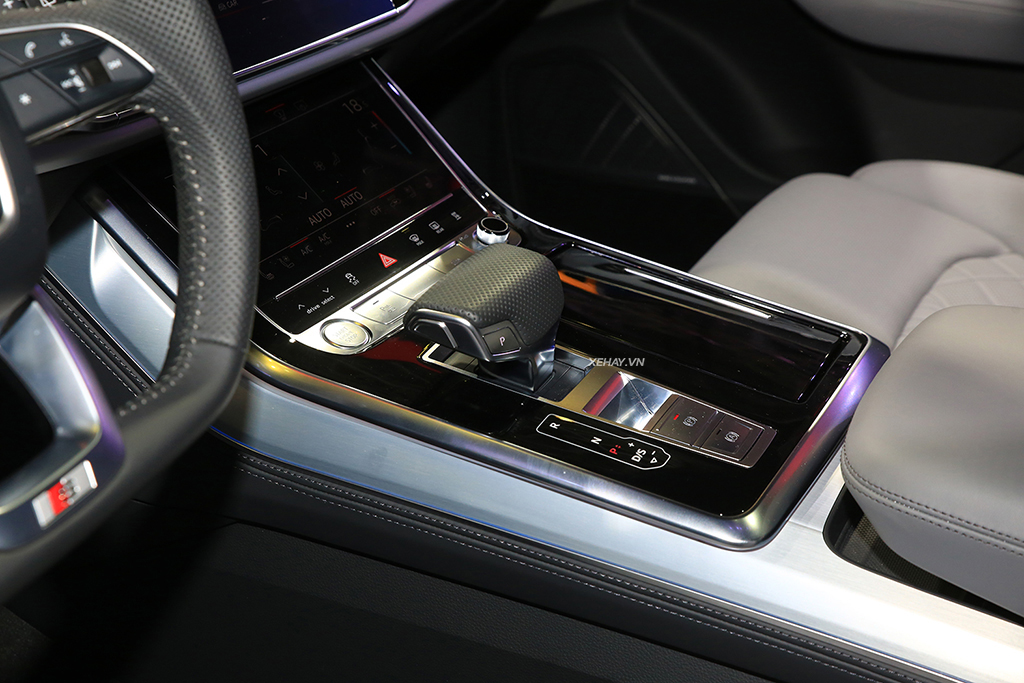 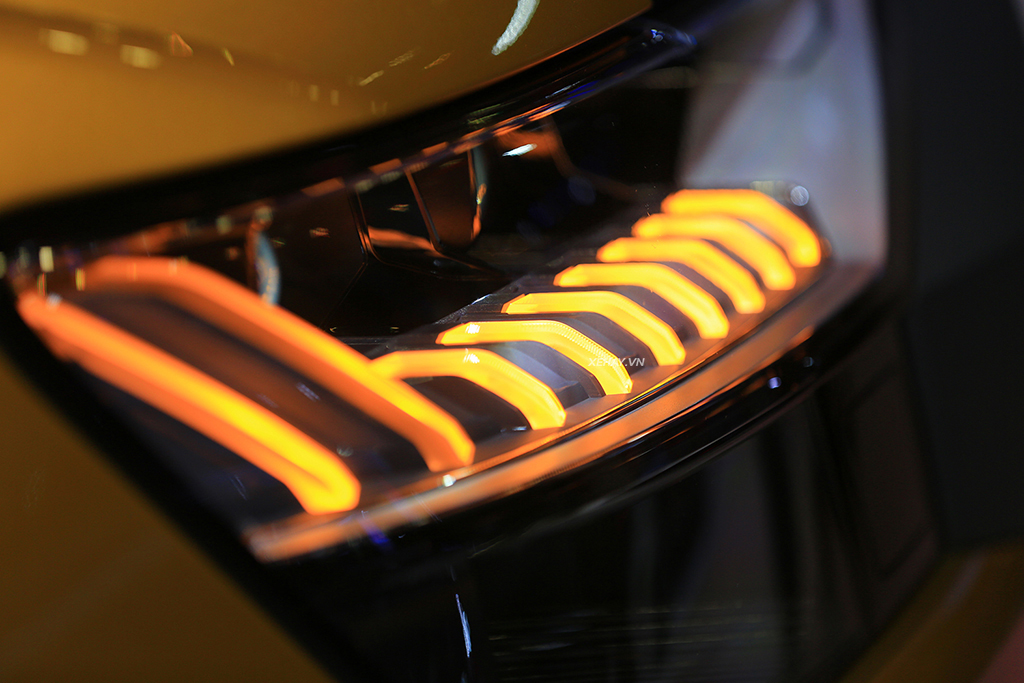 Besides the engine, gearbox and all-wheel drive system, suspension is equally important. The Q8 50 TDI has a pneumatic suspension system with variable dampers as standard equipment, while the lower S-Line will only have telescopic steel spring springs as standard, pneumatic is optional. charge. The system can “read” the front of the road thanks to the rear-mounted camera to change the stiffness of the damping just before the vehicle rolls on the specified road surface. And yet, the rear-wheel steering system with the ability to steer backward or forward in the direction of the front wheel with a maximum angle of 5 degrees makes the Audi Q8 more flexible at low speeds, firmly at high speeds. When switched to Off-road mode, the air suspension can be raised to 50 mm, creating a ground clearance of up to 254 mm so that the vehicle can conquer the tough roads. 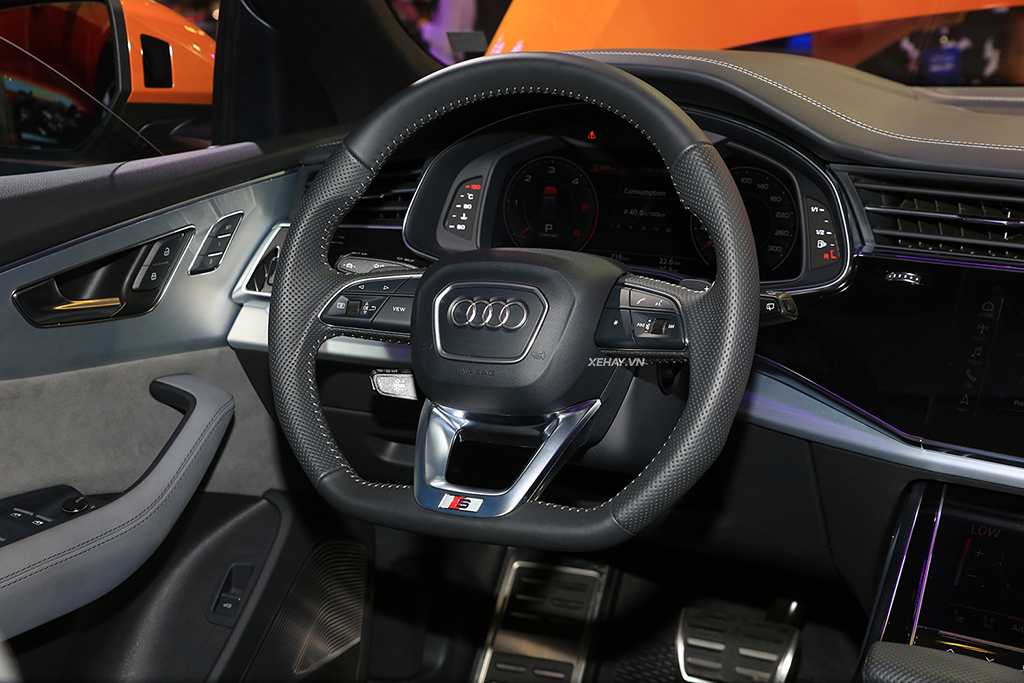 The suspension of the Audi Q8 promises to provide a smooth experience when needed, solid when the driver needs a sporty feel and the variable power steering system is also an interesting highlight. The “variation” of popular cars, such as Ford Focus, simply switches between 2 steering gear ratios depending on driving mode or travel speed. Audi Dynamic Steering system has a wide range of variability and diversity depending on vehicle speed, driving mode and road surface. The gear ratio of the steering wheel can vary 100%, that is, at low speeds, you only need to turn the steering wheel 2 times to stop driving left and right, and at high speed, in an emergency situation, you just need to Rotate 1 wheel to reach the maximum wheel angle. That makes the Audi Q8 flexible when you need to park your car at a narrow angle, stable at highway speeds and fast enough to help you steer quickly to avoid obstacles at high speeds. 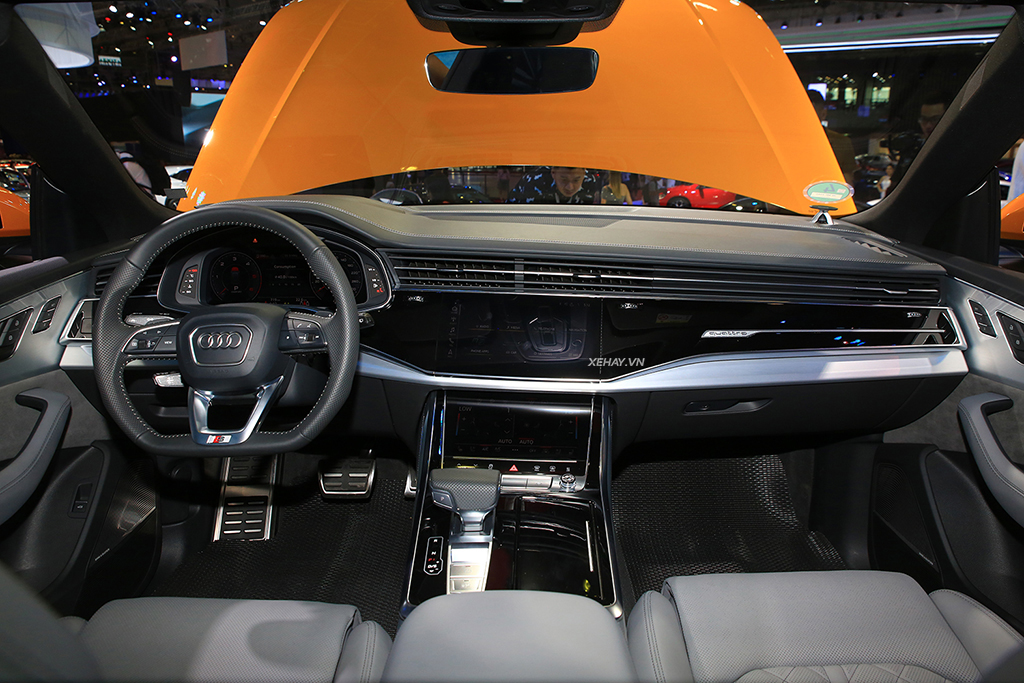 Audi Q8 is not only impressed by the sophisticated mechanical systems, but its interior compartment is also among the “top” in the segment. Contrary to the exterior, there is still a lot of controversy, the Audi Q8 interior is truly an impressive masterpiece, a perfect blend of high-quality materials and technological elite. The Q8 on display at the show is the most advanced version of Vorsprung, fully equipped with the S-Line and added many “toys” such as 22-inch 5V-Spoke wheels, exterior package. Titanium Black, panoramic sunroof, Valcona Supersport leather seats and premium sound system. According to many sources, the price of Audi Q8 is about 4.5 billion, but it is not clear whether it is the price of the “full option” on display at the exhibition or the standard S-Line. 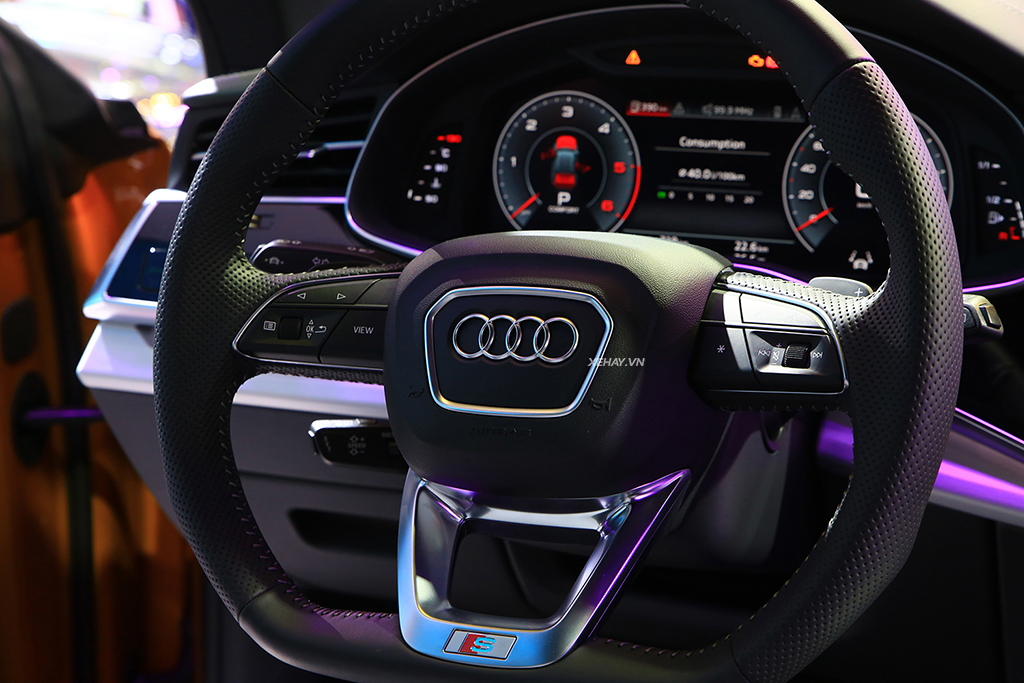 Let’s start with the steering wheel of the Audi Q8. This flat bottom 3-spoke steering wheel is familiar to Audi fans with its neatly arranged and easy-to-use buttons. It is covered with ultra-soft perforated leather and clings hands and dotted accents such as contrasting white embroidery or prominent S-Line logo. Behind the steering wheel is a 12.3-inch Virtual Cockpit screen with many beautiful 3D display interfaces. I like the type of display with the map accounting for 80% of the area, two speedometer clocks and a small set of symmetry below. Indeed, Audi making the screen is “only standard or higher”. 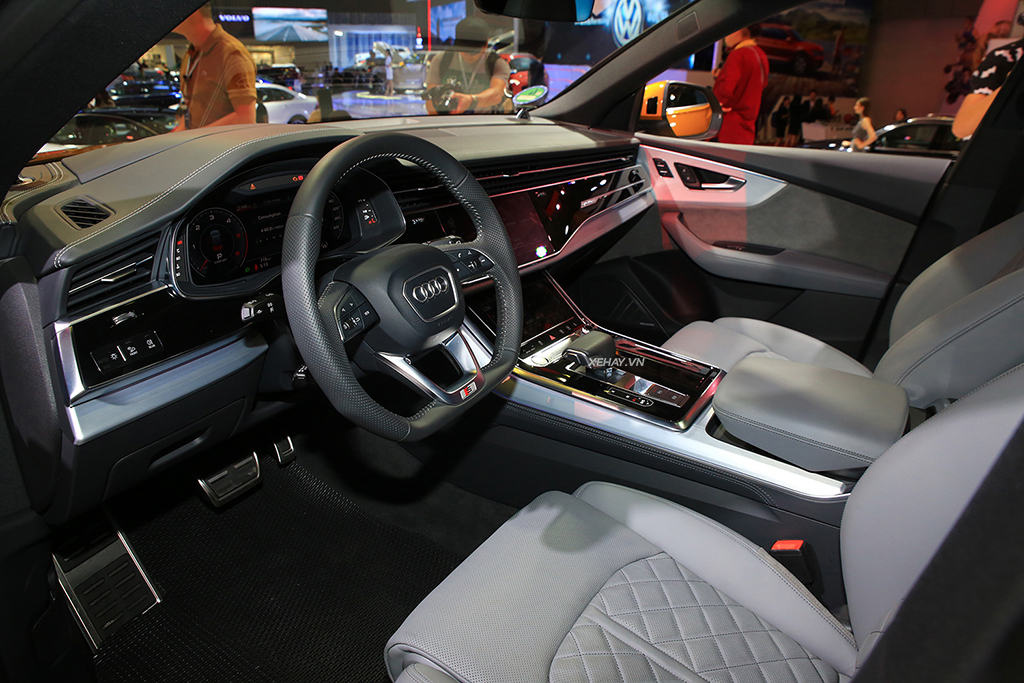 The dashboard is equally special. All air-conditioning vents are placed on the top floor and hidden in horizontal bars. Downstairs is a giant blackboard covering the width of the cabin, I have tried it but can not tell whether it is black plastic or glass, but it is very, very solid and glossy like a mirror. Directly below it is a brushed aluminum strip that wraps all the above details and spills over to the door trim area. 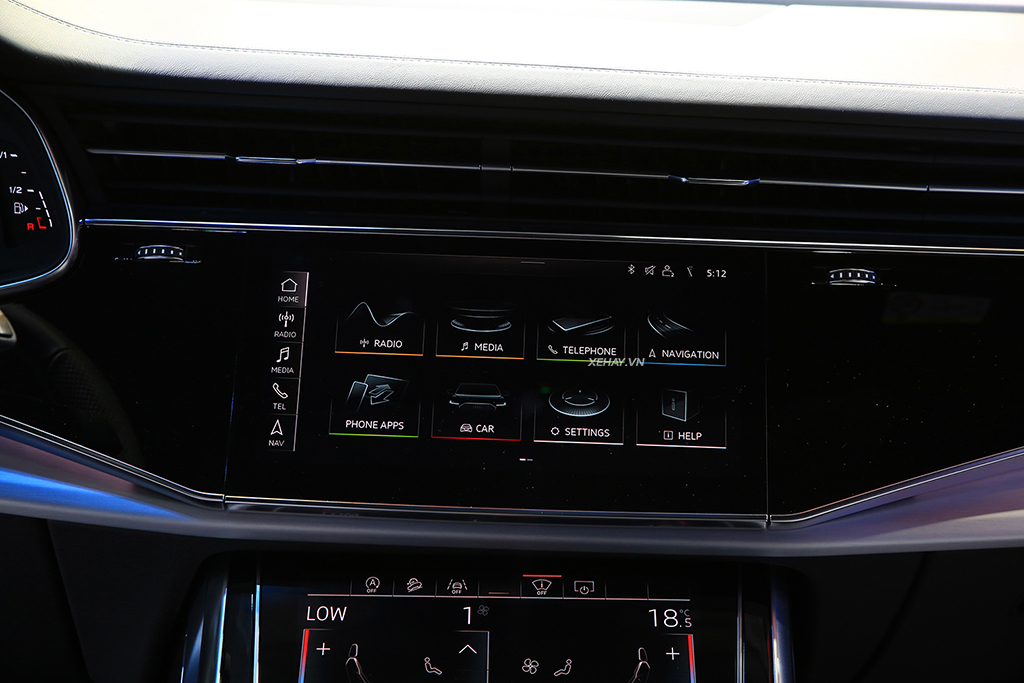 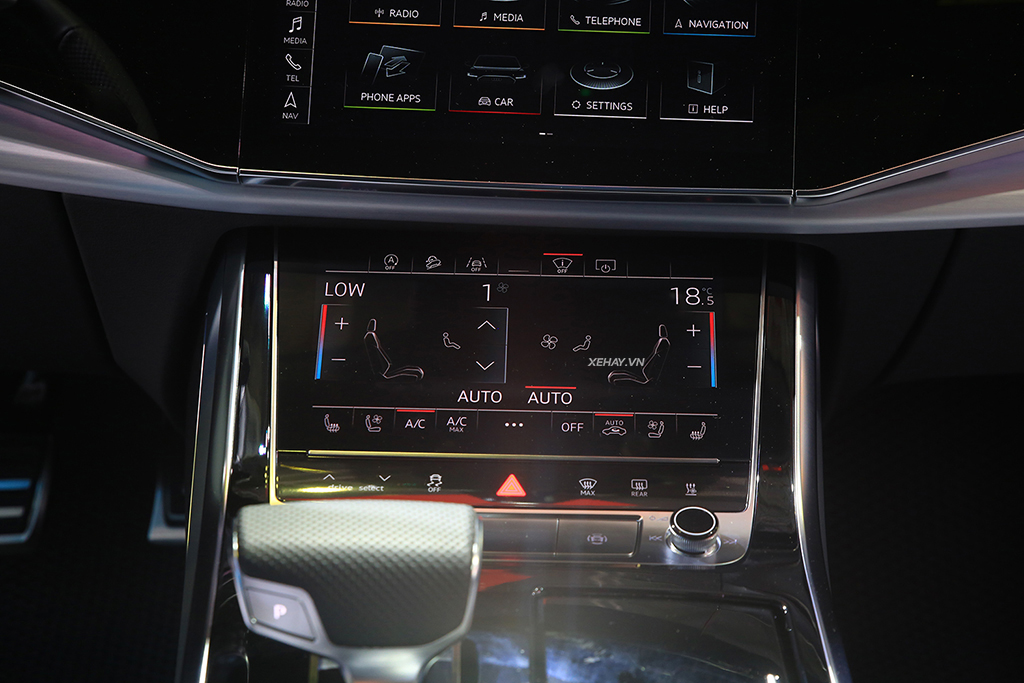 This is a typical design of the new generation Audi models, and within it is a large 10.1-inch screen that acts as the central screen of the MMI infotainment system. Right below it is an 8.6-inch screen that acts as the adjustment screen for the air-conditioning system and seat adjustment. Both of these monitors have full HD (1920×1080) resolution that is extremely sharp, bright and responsive. The screen also vibrates slightly and you need to press with a force strong enough for it to respond, similar to the iPhone 3D touch screen. Although this screen is fine, many people will still miss the control system with the central knob of previous Audi models. 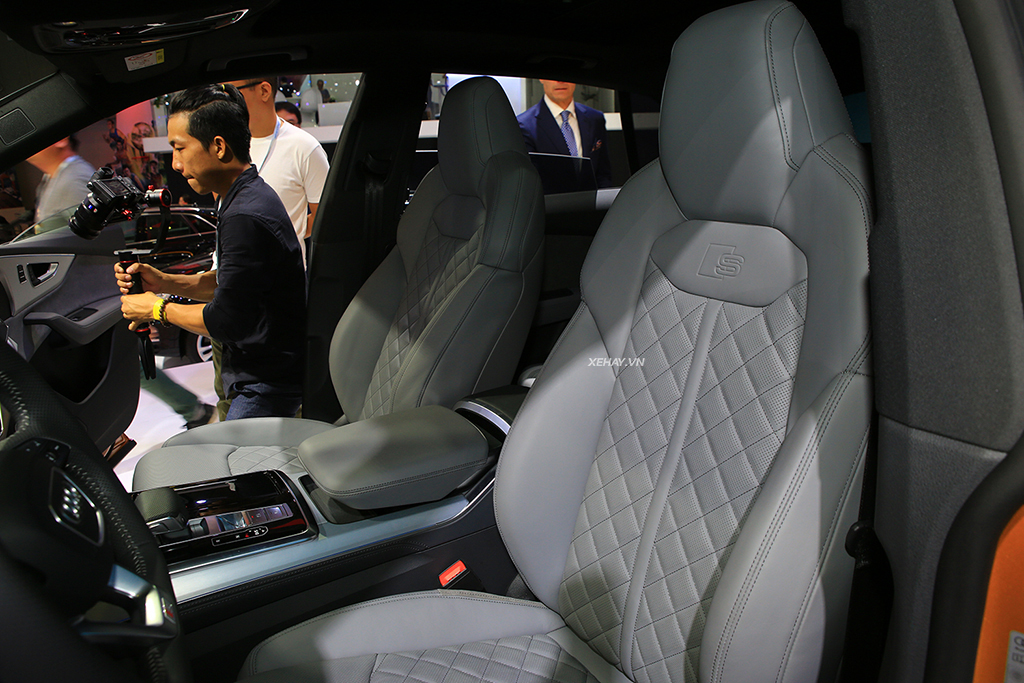 The seats of Audi cars are always what brings the perfect experience. The Audi Q8 “Vorsprung” version with Super Sport premium seats is standard. The seat is embroidered with fillings, soft leather Valcona and has very thick hip cushions to hold people tight when cornering, 2 memory locations and full features massage, warm repair, cooling. The roof and door panels are covered with Alcantara material, giving the Q8 a sporty feel. It can be said that from the design, materials to performance, the cabin of the Audi Q8 can convince anyone. 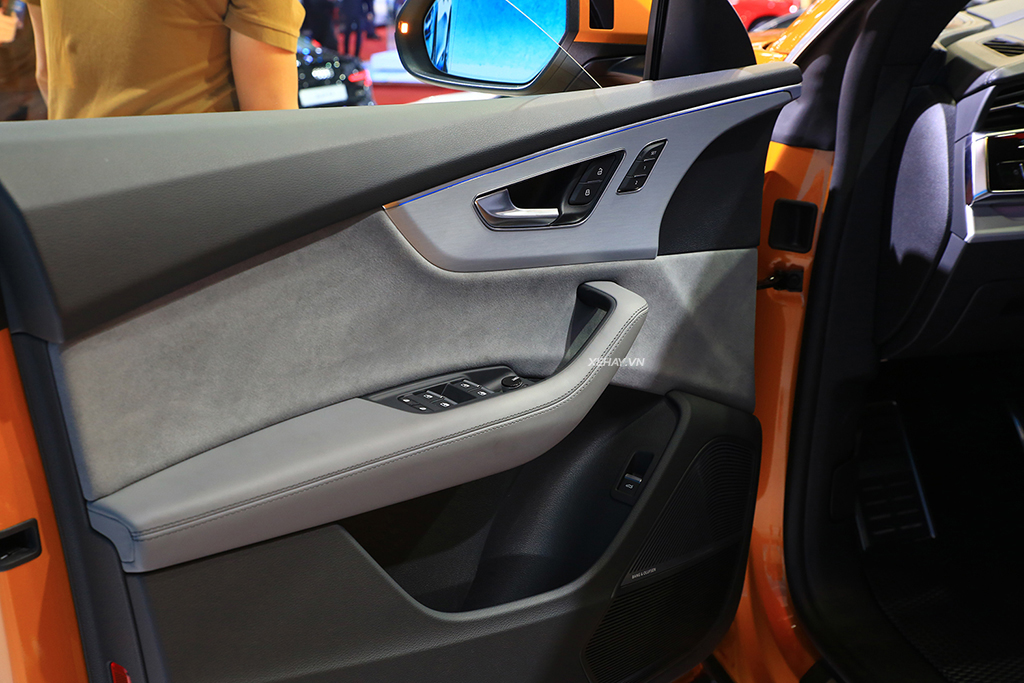 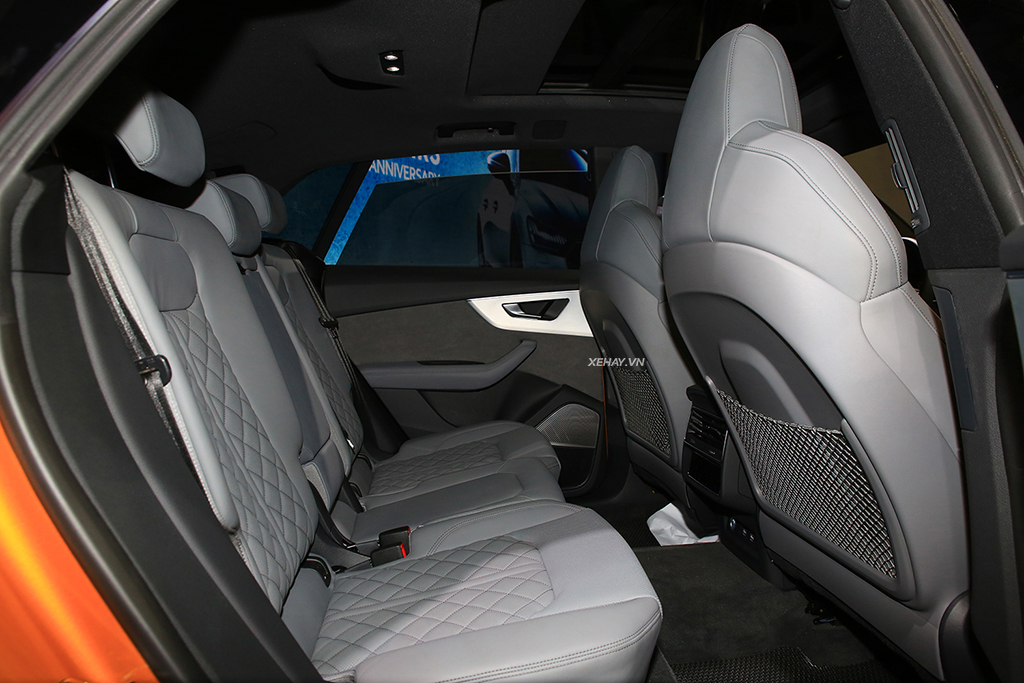 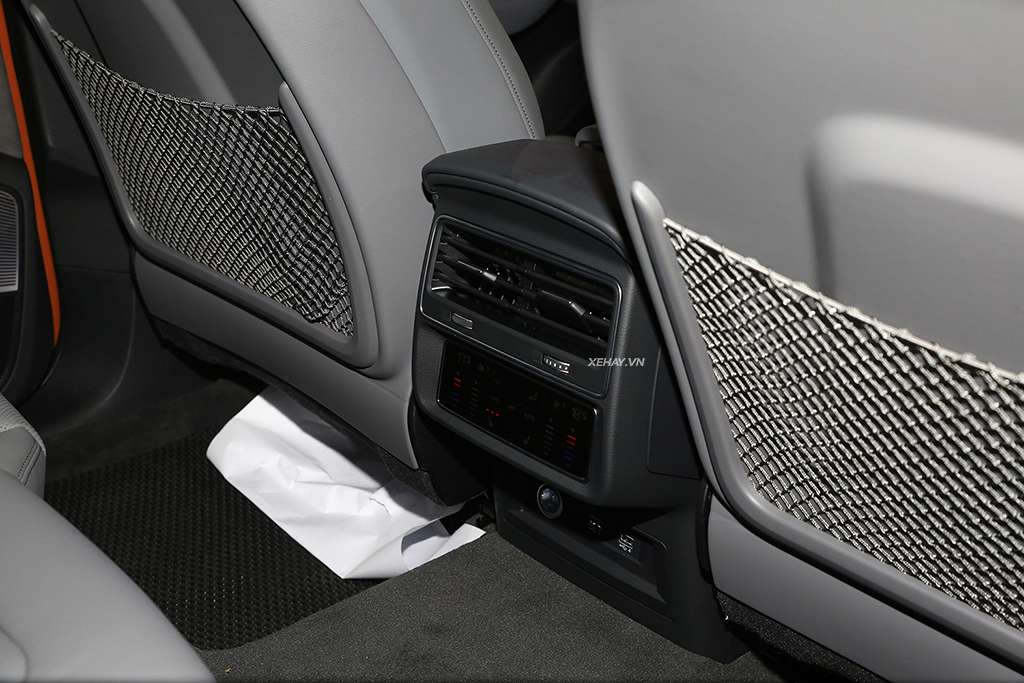 The space for the second row is not cramped even though the car has a coupe hybrid design. The headroom and foot space is very spacious for a person as tall as 1m7 like me, row 2 can also seat 3 people relatively comfortably. The back seat can recline, slide up and down and has heating. The rear compartment is also very large, up to 606 liters, more than enough to accompany you for a long day. According to my sensory experience, the rear seat of the Audi Q8 is wider than the BMW X6, it does not have to sacrifice the comfort of the back seat for the coupe design style. 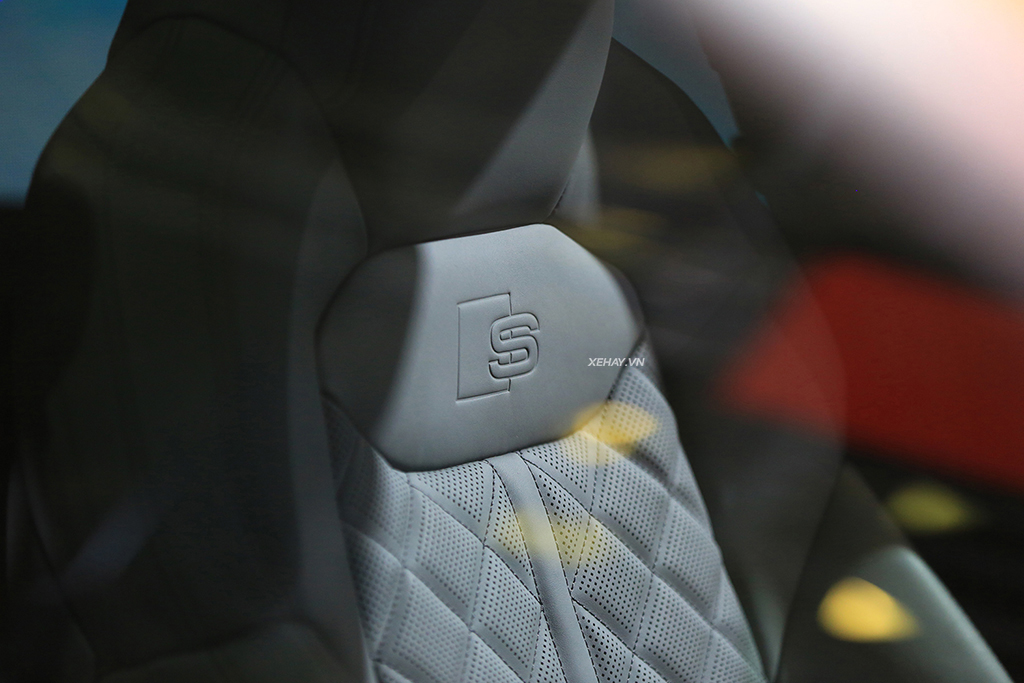 With a rumored price of VND4.5 billion, the Audi Q8 is clearly the brightest star in the premium SUV segment but does not belong to the “super luxury” category. This is a slightly better price than the GLE 400 Coupe 4MATIC and BMW X6 xDrive35i but totally worth it, at least through my initial experience at the VMS 2018 exhibition. end of life and really “backward” when compared to the most advanced SUV of the brand 4 circles. Audi calls, and is waiting for BMW, Mercedes-Benz to answer.