After the recent rise of Pi Network, two other virtual currencies, Bee Network and Timestope, also started to lure participants with the same free guise, decentralized decentralization and mining without losing anything with the phone. These coins all issue white papers about their vision and ambitions to change the world with millions of users participating, which is difficult to verify.

These emerging coins have full support for the Vietnamese and have started to appear dense recently in a rescheduled cycle, following Bitcoin’s unusual annual price spikes.

In fact, there are three very basic steps for a virtual currency to go public. The first step is to introduce an algorithm to invite participants, step two allows mining to a certain amount of coins and step three is to go on an exchange. 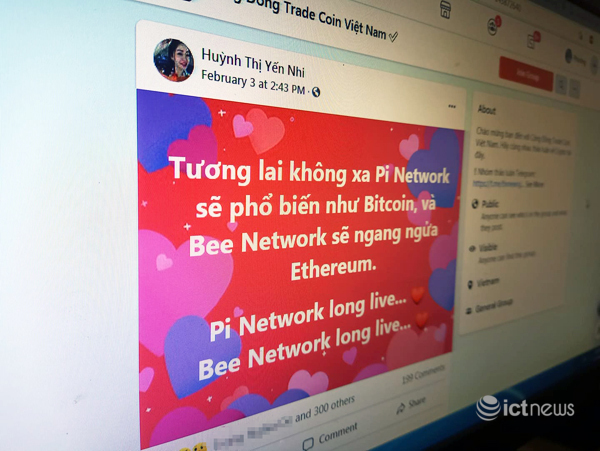 The posts on crypto groups do not directly entice participants, but create controversy that many people are curious to learn.

For example, on May 22, 2010, an application developer named Laszlo Hanyecz living in Florida (USA) used 10,000 Bitcoins to buy 2 pizzas, meaning there was an exchange of equivalent goods at at that moment. Of course if kept, those Bitcoins are now worth more than $ 375 million.Of course, these three steps guarantee does not mean a virtual currency will be as successful as Bitcoin. In fact, according to Coinmarketcap, there are more than 8,400 virtual coins on the market, but the majority of them are virtual currencies with a value of less than $ 0.1 due to the difference in supply and demand, which makes it impossible to create value. really.

Unlike Bitcoin, many grass coins (altcoins) when they first went public, soared in value very quickly due to the manipulation of the market by the sharks, then bottomed out and removed from the exchange. Recently, four virtual currencies, Blockmason Credit Protocol, CyberMiles, Time New Bank and Vibe, have been pushed off the exchange in that way.

That means, the next generation of cryptocurrencies or mobile mining is not a 100% guarantee of success. Before joining, users need to ask very basic questions such as what will they gain and what to lose when mining these coins?

Then, interested people will be invited to participate in a sophisticated, sophisticated way with an emphasis on the FREE element.

The default in mind that users do not lose anything when someone has worked hard to create virtual currency is a trap in the mind. Millions of unidentified application users are the source of the application’s livelihood, not the virtual currency being created or the values ​​drawn by the creators of the virtual currency in the future.Obviously, by installing any application on an Android phone, the user has automatically agreed to grant access to the smartphone and let that application collect information sent to the server. It’s no coincidence that sometimes Google still removes many apps from the Play Store for reasons of unauthorized collection of user information or malicious code.

A classic saying is probably very true in this context, which is ‘what in the world is free, the user is the product’. However, since there are no constraints in the cryptocurrency market, even if it is multi-level variable, only time will give participants the most accurate answer about what these virtual currencies will be.