Counterpoint: Apple is gradually losing its position on the high-end smartphone segment – VnReview


According to the latest analysis data, Apple is showing signs of slowing down and losing market share in high-end smartphone segment.

According to the latest report from market analysis firm Counterpoint Research, the world high-end smartphone market has dropped 8% from the previous year in Q1 / 2019. It is worth mentioning that the major contribution to this decline is Apple's iPhone sales. During this period, Apple's iPhone sales fell 20%. 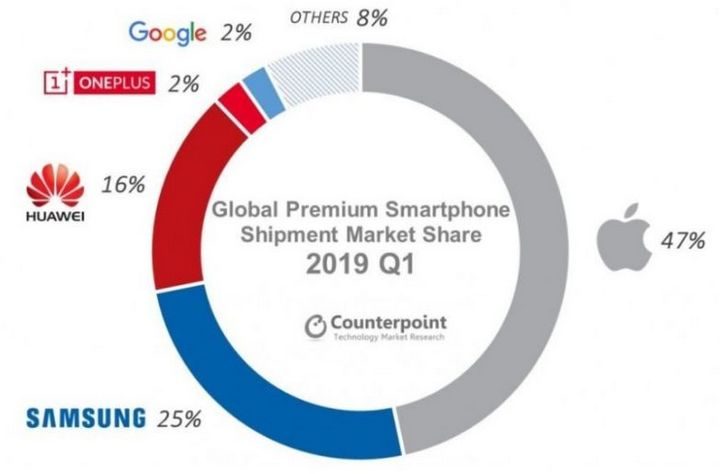 Chart of market share of firms on high-end smartphone segment

Counterpoint noticed, Samsung's growth was largely due to the launch of the Galaxy S10 / S10 + and S10e trio. Although Galaxy S10e owns a lower price than the S10 / S10 + duo, in general, it still belongs to the high-end segment. Thus attracting a large number of customers to buy this product.

Huawei's market share also grew slightly in Q1 / 2019 thanks to the P30 series. However, after the US government's ban on business cooperation was issued in late May, it is unclear what Huawei's high-end smartphone sales will be in Q2 / 2019.

Another Chinese smartphone company, OnePlus on the other hand, is very successful in the world. After being successful with the OnePlus 6T improvements, the company continues to release OnePlus 7 and OnePlus 7 Pro. Two machines with new forms, superior configurations and attractive prices continue to stir up the high-end Android smartphone market in many countries, including the US.