We present general video on demand services (such as Netflix, Disney +, Apple TV + and ICI Tou.tv) as well as specialized services in cinema (Mubi, in particular) and in sports (among others RDS Direct). You can access it on your TV with devices like Apple TV and Chromecast.

Generalists
For sports fanatics
For movie buffs
iTunes and Google Play: good additions
What devices should I use to watch them?

More than ever, consumers across the globe are turning to streaming services for entertainment. During the first six months of 2020, the number of Netflix subscribers jumped by 26 million, reaching over 193 million worldwide!

The appeal of this service: you watch what you want, when you want it, on the device of your choice, all without advertising. For packages whose rates range from $ 10 to $ 19 per month, the content offer is vast, ranging from movies to TV series, documentaries and cartoons. Besides Netflix, you can also choose from several other platforms, including ICI Tou.tv, Club illico, Prime Video (from Amazon), Disney +, Crave and RDS Direct. The price for these services ranges from $ 6 to $ 28 per month.

We present here a comparison of 19 of these services. These look more and more like television channels: some are generalist, while others are specialized (in cinema or in sport, for example). You can therefore make your choice according to your interests. The example movies and TV series were collected in July 2020 and their availability may have changed since.

All these services are offered by monthly subscription, without commitment. So you can subscribe for just a few months, the time to take a look at everything that interests you in a particular service. Some of them, including Netflix, are delivered directly to smart TVs. However, to access a wider range of services, it is better to connect a streaming device to your television.

If you want to drop your traditional TV subscription, you can also get a UHF / VHF antenna, which will give you free access, in high definition (HD), to basic channels such as ICI Radio-Canada Télé, TVA , Télé-Québec and Noovo.

There you will find TV series (like Black Mirror and Ozark), documentary series (Tiger King and Jeffrey Epstein: Filthy Rich, in particular), films (Arrival, Until decline, etc.) and more. For its part, the children’s section offers, for example, children’s series Paw Patrol and PJ Masks. According to Netflix, 60% of its content presented in Canada is offered in French (or with subtitles in that language). Three packages are offered: basic (1 screen at a time in standard definition), at $ 10 per month; standard HD (2 screens at a time in high definition), at $ 15 per month; and premium ultra-HD (4 screens at a time in ultra-high definition), at $ 19 per month.

This is another great service for TV series fans. Crave offers for example Dexter, Sex and the City and The Handmaid’s Tale with its basic plan ($ 10 / month or $ 100 / year). Many of these contents are offered in French. The “Crave + Movies + HBO” package ($ 20 / month or $ 200 / year) also features recent movies, such as Joker, as well as the latest episodes of series broadcast by the HBO TV channel – including Game of Thrones -, but in English only. For a maximum of productions in French, it is better to opt for the “Crave + Super Ecran” package ($ 20 / month or $ 200 / year).

While it is mainly associated with Radio-Canada (ICI Radio-Canada Télé, ICI ARTV and ICI Explora), ICI Tou.tv also offers programs from several channels: Télé-Québec, TV5, etc. The free version allows for example to watch Discovery and Infoman, while the “Extra” package ($ 7 / month; free with a subscription to a Telus service) gives access in particular to Outlander and to Vivid memories. The two versions of ICI Tou.tv also offer the possibility of watching the ICI Radio-Canada Télé channel live.

Club illico ($ 15 / month) offers several films (Ex Machina, A zoo at night, etc.) and TV series (The fault, my son and Wicked, among others) in French. Children’s section includes films Peanut butter operation and The Boss Baby, for example, as well as the series Masha et Michka.

Do you order a lot of products from Amazon? If you subscribe to Prime ($ 8 / month or $ 79 / year), not only will you receive some of your purchases within two days, but you will also have access to the Prime Video service. This one features movies like American Psycho and Midsummer as well as original TV series such as Fleabag and The Marvelous Mrs. Maisel. Many of these contents are offered in French.

With its service at $ 9 per month (or $ 90 per year), Disney + offers a great selection of movies and TV shows from Disney, Marvel, Pixar, Star Wars and National Geographic. A good number of these productions are available in French.

At $ 6 per month, Apple TV + service is affordable, but its catalog is limited. It almost only offers exclusive productions, like the film USS Greyhound (with Tom Hanks) and the TV series The Morning Show (with Jennifer Aniston, Reese Witherspoon and Steve Carell). Most of this content is offered in French.

The two major French-speaking sports broadcasters, RDS and TVA Sports, offer a streaming service providing access to the same content as on TV. RDS Direct ($ 5 / day, $ 20 / month or $ 100/6 months) features 67 Canadiens games and 51 Senators games, while TVA Sports direct ($ 20 / month or $ 200 / year) broadcasts 22 Habs games as well as approximately 230 games of other National Hockey League (NHL) teams and the playoffs. Each can also count on their exclusives, for example the National Football League (NFL) games and Formula 1 races in the case of RDS, and Major League Soccer (MLS) games as well as the Rogers Cup on the side. of TVA Sports.

Sportsnet Now ($ 20 or $ 28 / month, depending on the plan) and TSN Direct ($ 5 / day, $ 20 / month or $ 100/6 months) also broadcast their TV channels live on the web. Their programming includes games from the Premier League (soccer), the National Basketball Association (NBA) and the NHL.

For his part, DAZN ($ 20 / month or $ 150 / year) broadcasts all NFL football games, not to mention a large number of European soccer and boxing games.

To watch Quebec classics such as My uncle Antoine and For the rest of the world, turn to the service of the National Film Board (ONF).

If you are a fan of repertory cinema, the offer of Mubi ($ 10 / month or $ 84 / year) should please you. At all times, this service offers 30 feature films. Every day a new movie is added and another is withdrawn. For example, last July, there were several films by Jean-Luc Godard. A video library also provides permanent access to titles such as Hiroshima my love, Alain Resnais, and The white ribbon, by Michael Haneke. These films are presented in their original language; subtitles are available in several languages, including French and English.

All of the following services feature films in their original language, with English subtitles only.

Sundance Now (US $ 7 / month or US $ 60 / year) also specializes in repertory cinema by suggesting titles like The Tree of Life, Laurence Anyways and Carol. For his part, Shudder (US $ 6 / month or US $ 57 / year) will delight fans of horror cinema and thrillers with among others The Return of the Living Dead, The Nightingale and Antichrist.

The Criterion Channel (US $ 11 / month or US $ 100 / year) offers a rich selection of classic and repertoire films, for example The Sweet Hereafter, by Atom Egoyan, and Aguirre, the Wrath of God, de Werner Herzog.

Your budget is limited? A subscription to the Bibliothèque et Archives nationales du Québec (BAnQ), free to all residents of Quebec, allows you to watch four films per month free of charge using the service Canopy. You will be able to see there Fires, The Lobster and Call Me by Your Name.

Finally, Pipes also allows you to watch a host of movies for free, but with commercial breaks. Among the titles offered: Swiss Army Man, Foxcatcher and Boyhood.

Some recent content, such as the TV series Yellowstone or the movie 1917, are not in any streaming service. However, you can get them from iTunes or Google Play virtual stores. A movie or TV series usually costs around $ 20 to $ 25 to buy. For a movie rental, you have to pay around $ 7.

Wondering which services offer a particular movie? Nothing could be simpler: do a search on the Where to See This or JustWatch sites. The latter also allows you to search for TV series.

What devices should I use to watch them?

It is possible to access all the services mentioned in our article on a computer with a web browser as well as in applications for iOS and Android mobile devices. Some are also compatible with models of smart TVs and video game consoles. To get as many services as possible on your TV, you can also get a streaming device, like Apple TV or Chromecast. In the table below, see which services are compatible with which devices. 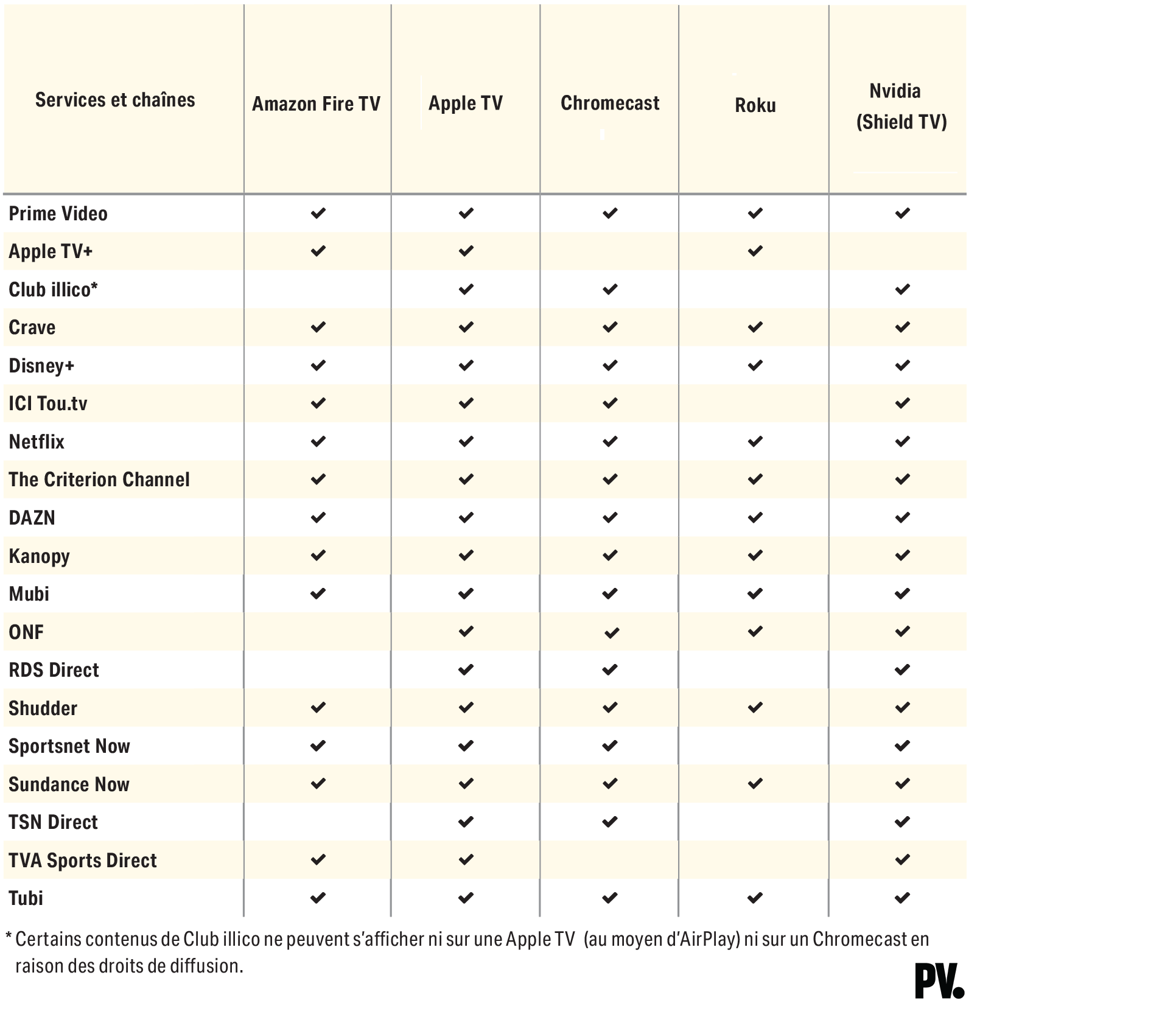