Compare Mazda BT50 and Mitsubishi Triton: Which Japanese car is more worth buying?


The same is a Japanese pickup, but comparing the Mazda BT50 and Mitsubishi Triton each model has its own advantages and disadvantages, especially in design.

Two pickup trucks Mazda BT-50 and Mitsubishi Triton from Japan bring an indisputable concept in the development of the country’s pickup truck industry. Both models come with a new design and the ability to operate extremely stable, not inferior to any brand in the world. Not only that, these two pickup products are also widely selected, including Vietnam thanks to their outstanding endurance. 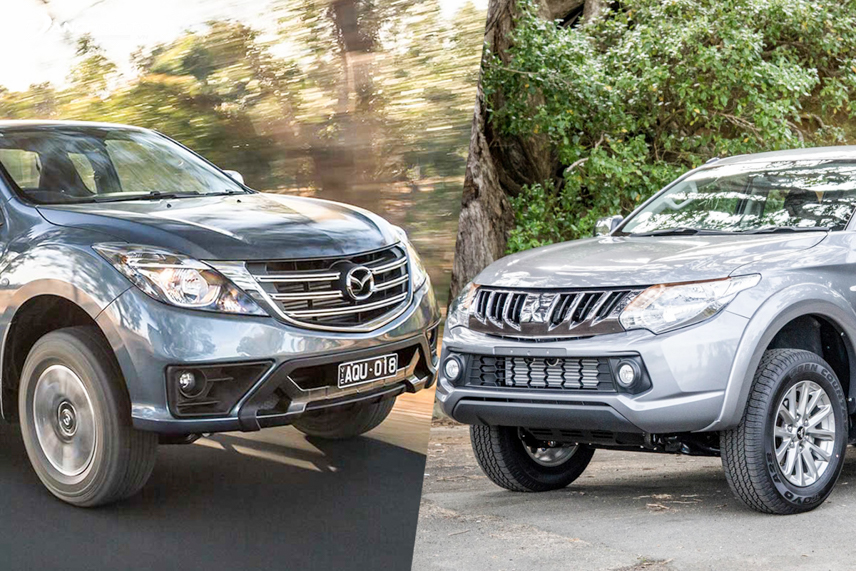 Mazda BT-50 is considered by many experts to be a highly aerodynamic automobile product thanks to the body design with scientific lines and the front of the car reducing air friction. Therefore, this model can accelerate smoothly along with high fuel economy compared to competitors in the same segment.

Meanwhile, Mazda BT-50’s compatriot rival, Mitsubishi Triton, is also focused on modern technology by the manufacturer to compete more effectively in the harsh pickup market in Vietnam. This is considered a model that the Japanese automaker prioritizes to upgrade with MIVEC Diesel engine first appeared in Vietnam, along with advanced equipment and facilities, this model promises to create a direct confrontation. to rivals such as Ford Ranger, Chervolet Colorado, Toyota Hilux, Nissan Navara and especially Mazda BT-50.

Compare Mazda BT-50 and Mitsubishi Triton in terms of exterior

In terms of exterior design, both models are strong, sporty of most other pickups. However, overall, the BT-50 Mazda has a harmonious design between two sportier and more aesthetically pleasing elements, so Mitsubishi Triton is far ahead of this opponent in terms of bunkers. 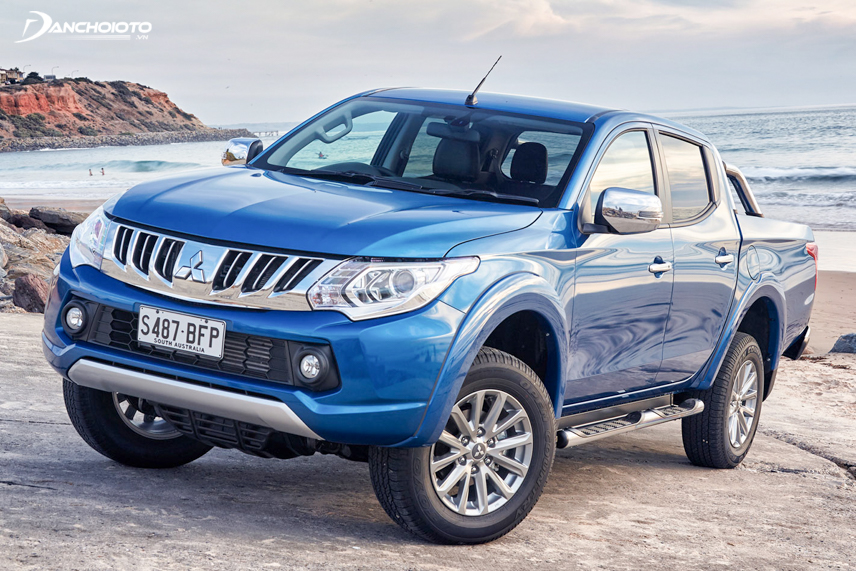 Compared to previous generations, Mazda BT-50 does not have too much difference in exterior design, this model has only been upgraded, added some equipment in the interior as well as operation. Meanwhile, Mitsubishi Triton carries a lot of differences. The version is completely removed from the familiar appearance that is popular with many consumers. Instead, the pick-up truck of the leading technology automobile corporation in Japan exudes a more polished appearance with angular lines. In addition, eye-catching details of high aerodynamics are exploited and applied thoroughly by Mitsubishi Motors on this completely new version.

Judging by the Mazda BT-50, it can be said that the pickup is really a muscular and powerful car when it comes to owning a quite large size. Compared to competitors in the same segment is Mitsubishi Triton. 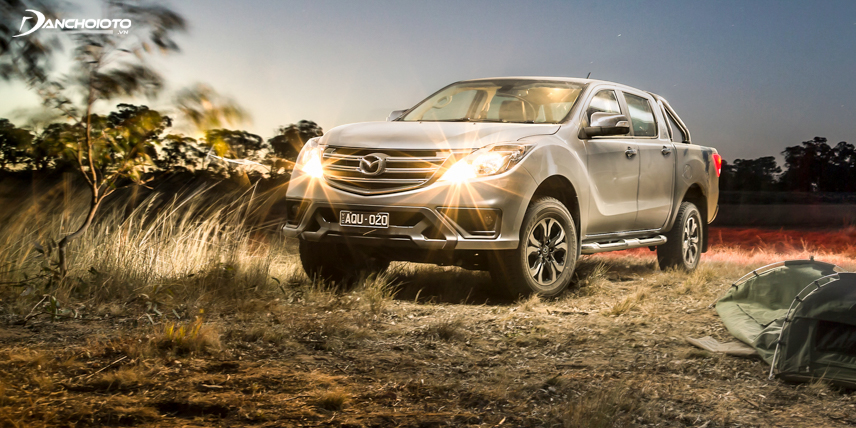 The Mazda BT-50 is larger than the Triton

The Mitsubishi Triton loses more than the BT-50 in almost all dimensions. The car has a ground clearance of only 200mm, inferior to competitors 37mm. This makes the Triton’s complex terrain moving much less than BT-50.

Despite a modest size than Mazda BT-50, however, Mitsubishi Triton “eat well” thanks to the eye-catching car head design, bearing impressive sports impression. The front end features a distinctive titanium grille, the lower part of the V-shaped firm logo exudes a strong and sturdy appearance. Along with that, the front bumper is made of a large dark painted image that hugs the head and is highly sculpted to create an impressive image. 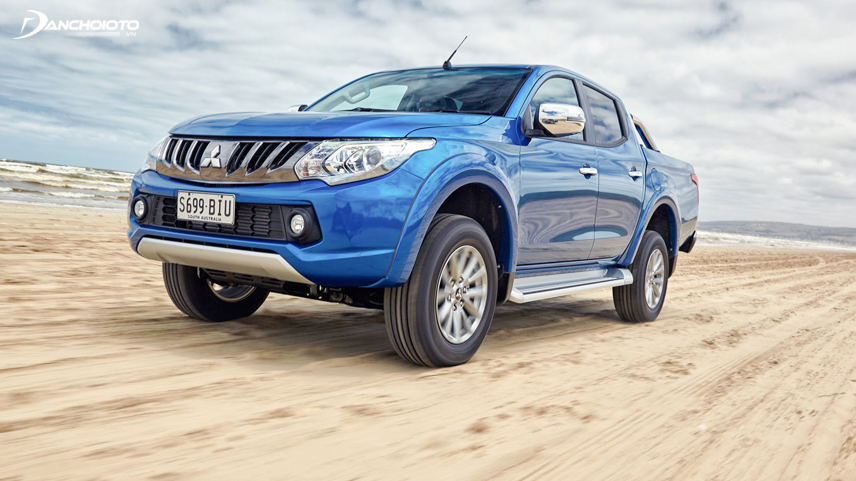 The front part of Mitsubishi Triton

Meanwhile, Mazda BT-50 owns the front of the car with a simple design. Compared to the first generation launched, this design almost unchanged. The car uses a chrome grille cluster along the border, hugging the company logo in the middle. However, overall the design of the Mazda grille on the BT-50 is not very impressive.

In terms of lighting equipment, compared to most competitors in the same segment, Mazda BT-50 has the most “poor” type of lights. The Japanese automaker only equips halogen lamps for all versions of the BT-50. The headlight design of BT-50 also does not bring much aesthetic sympathy for the opposite. Meanwhile, fellow rival Mitsuhbishi Triton is equipped with LED technology headlights, surrounded by luxurious silver-plated surrounds.

The Mazda BT-50 has a wheelbase larger than Triton to 220mm, so the overall size of the body of the BT-50 looks more plump than the opponent. Although both models offer a new, sporty body design with stiff lines. However, a few minor differences also make these two models suitable for many different users.

Mazda BT-50 has a prominent body design with large ribs, extending from the front to the rear for a sense of health and seamlessness. Comes with an eye-catching chromed door handle, along with an electric folding rearview mirror with built-in turn lights for users and increased signaling when traveling on the road. In addition, Mazda’s unique pickup truck is also equipped with a sturdy aluminum alloy pedestal, which makes it easier to access the vehicle. 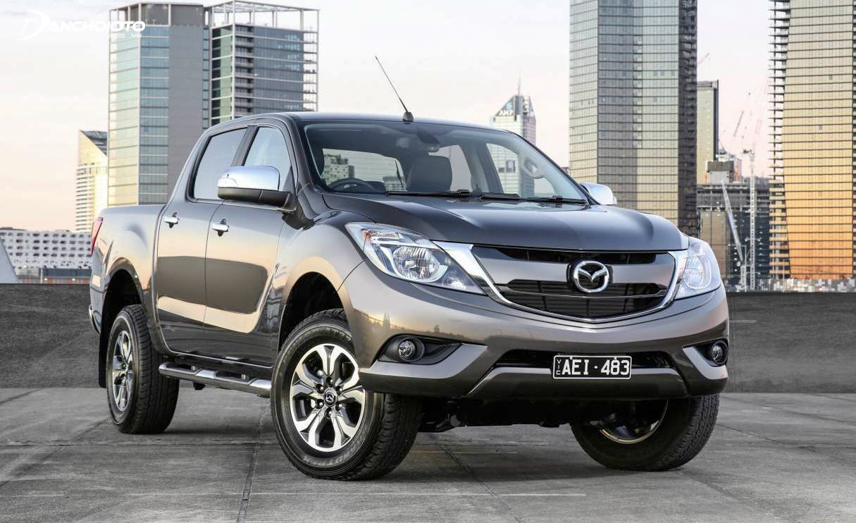 Meanwhile, Mitsubishi Triton has a prominent side of the car thanks to the rearview mirrors that also have the ability to adjust, fold the power and have integrated turn signals. However, more modern than BT-50, turn signals on the rearview mirror of Triton are equipped with LED lights. Along with that is the chrome-plated handle integrated lock by the smart one-touch open button.

Triton has a lot more beautiful wheels than BT-50. Vehicles using 17-inch wheels are quite small, but designed in a single 6-spoke style with a unique serrated pattern. Mazda BT-50 is also equipped with 17-inch wheels like Triton but comes with a rather monotonous 5-wing design. 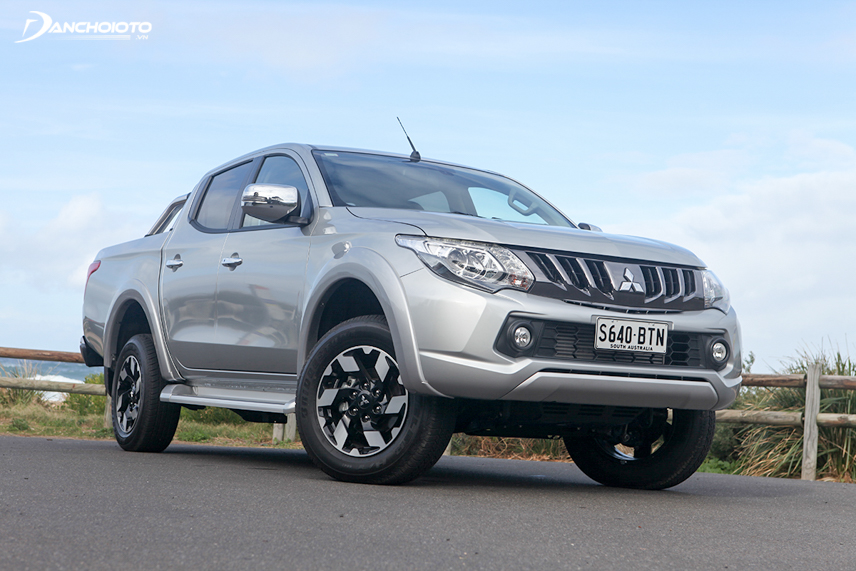 Mitsubishi Triton features a LED tail light with a square design and is symmetrically arranged hugging the tail and body. The vehicle also has an additional LED brake light strip placed on the trunk cover for a higher alert effect for vehicles moving behind. 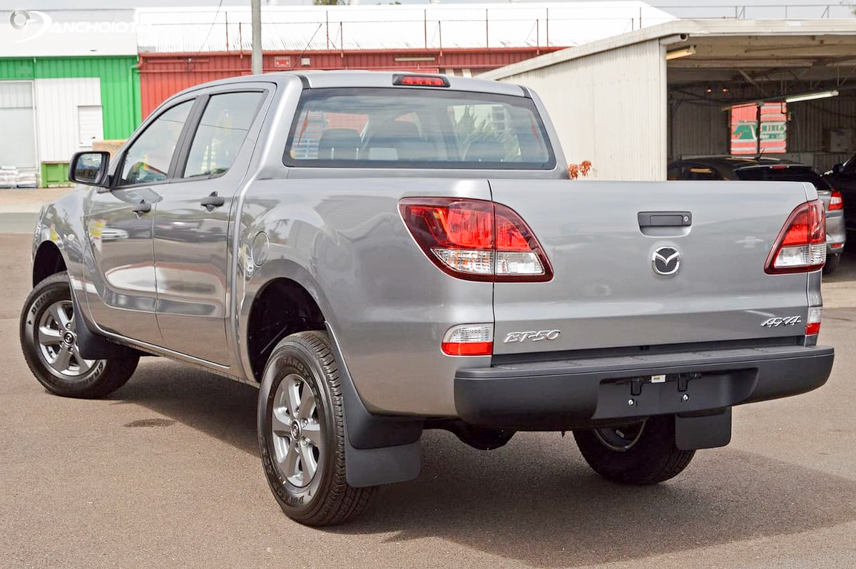 Meanwhile, the ability to alert the rear vehicles of Mazda BT-50 is quite limited if the cargo compartment cover is forced to open when carrying oversized cargo. Because the taillights of the taillights are designed on the lid of the cargo box, the lighting of the taillights is limited. Not only that, Mazda BT-50 has a tail light designed quite simple and uses traditional Halogen ball technology. This makes this model “underdog” when compared to rival Triton in the same segment.

Compare Mazda BT-50 and Mitsubishi Triton in terms of interior

In terms of interior equipment, Mazda BT-50 is completely unable to compare with Triton in terms of modernity and comfort of interior space. Mazda has focused too much on user convenience without paying much attention to the aesthetic details. Therefore, the buttons in the center control area or air conditioner control are both quite rough and not nice. 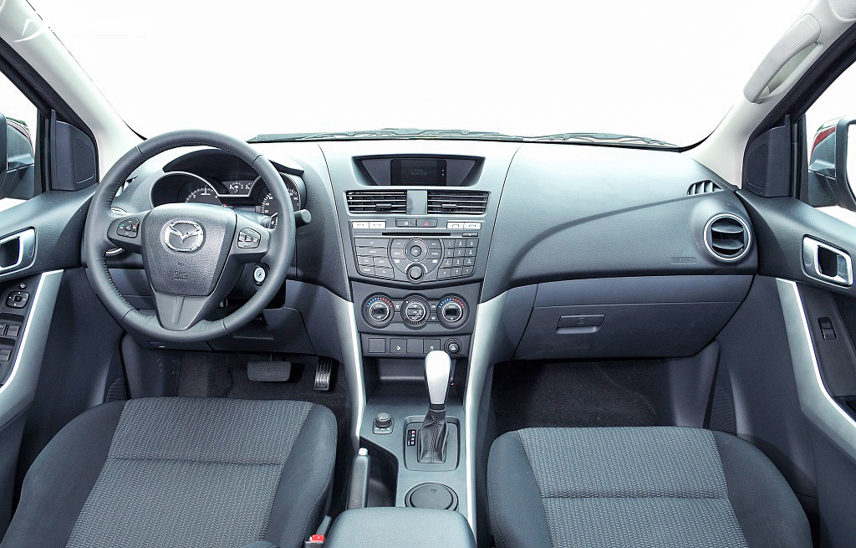 Meanwhile, reviews of Mitsubishi Triton cars on interior equipment show that the model is carefully cared for by Mitsubishi in interior designs. The car is equipped with extremely beautiful interior with leather material and 2 tones to make the synchronization and appeal different from the felt material like on BT-50. The taplo area of ​​Mitsubishi Triton carries Mitsubishi’s typical J-line design with the taploid face extended to the sides to make the cabin feel spacious and airy. Not only that, thanks to the use of black tones for the interior with shiny chrome details to help the interior of the car become luxurious and class.

On the taplo side of the Mazda BT-50, the Japanese automaker mainly uses a design that is convenient for users. The details in the area where the keys control the functions are also subtly decorated. In general, most of the materials in the interior of the car are aimed at durability and good service for the needs of customers.

Triton steering wheel is elegant and modern with high-quality leather and designed in the form of “Dynamic Shield” with integrated convenient buttons. The same function keys also appear on the high-end version of Mazda BT-50 while the lower version is equipped only with a bare steering wheel. In addition, a special attraction on Triton that many users prefer is the gear shift lever under the steering wheel for a more sporty driving experience. 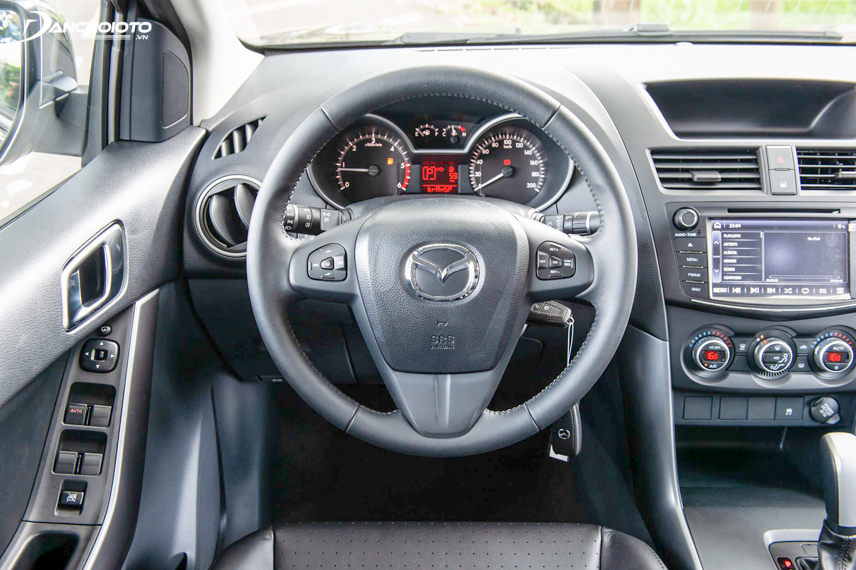 Mitsubishi Triton has an 8-way power driver’s seat, an auxiliary seat with 4-way manual adjustment, while the Mazda BT-50 driver’s seat is equipped only with an uncomfortable mechanical adjustment. In addition, the second row of the two models is not much different.

In terms of comfort equipment, in general, the two models are quite well equipped. Triton is equipped with a 7inch IPS touch screen with a sharp display with integrated CD player, AUX connector, USB, along with 6 speakers for good sound quality. 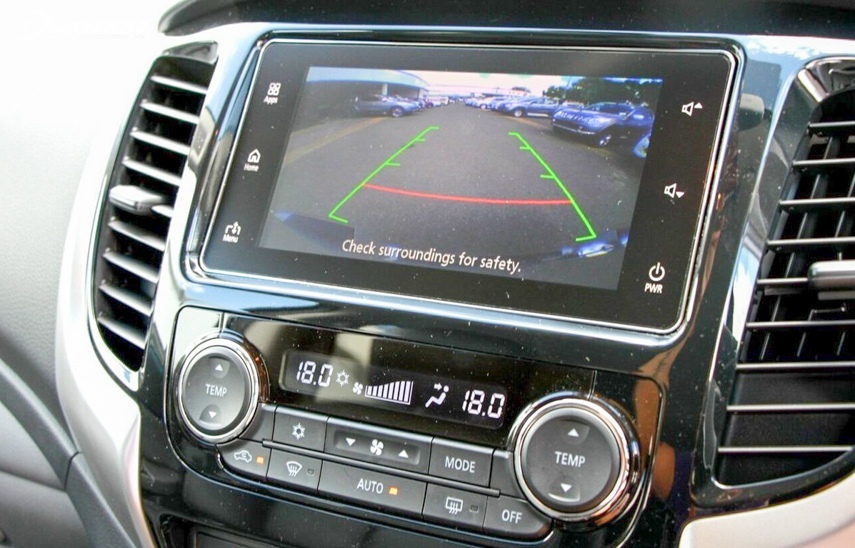 For the BT-50 entertainment system, the car is also equipped with a CD screen, central touch screen with Radio connection and ports for communication with the car via AUX, USB, Bluetooth and a 6-speaker sound system. High power. In addition, a number of other utilities such as push-button start with convenient smart key, automatic rain wiper sensor, electric anti-jamming position glass door … all appear on these two models.

Regarding engine equipment, the current pickup model of Mazda has two options for the user to choose from, including: 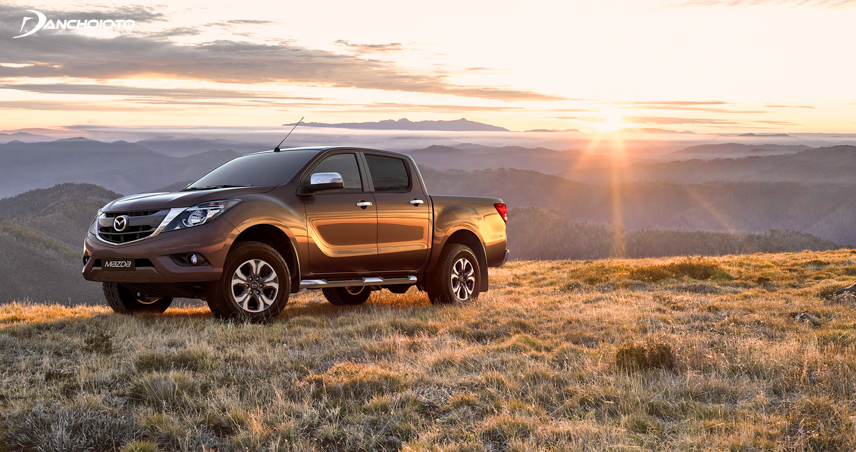 For Triton, although sold in many different versions, but the car is equipped with two engine options including:

Evaluating the Mazda BT-50 in terms of performance, the car has a high ground clearance in the top class segment, up to 237mm to help this pickup model have the ability to overcome extreme terrain. Compared to the Mitsubishi Triton with a ground clearance of only 200mm, the Mazda pickup has created a huge distance in terms of operating factors with its opponent.

For Triton, this model is the first generation to be equipped with a diesel engine made from aluminum. Therefore, the weight of the vehicle is significantly reduced and improved stability when cornering at high speeds. It also has a sport driving mode that gives users a true experience of accelerator sensitivity, brake pedal and strong acceleration. In addition, the car is also equipped with front shock absorbers independent form, rear leaf tweezers help moving through rough roads, complex terrain becomes simpler.

In general, the two models are quite focused on ensuring the safety of users by equipping quite a full range of safety functions. Specifically:

In addition, Mitsubishi Triton is also equipped with 2 pockets when safe in the front seats along with automatic belt tension function to help the driver and passengers safer when sitting. At Mazda BT-50, the car is equipped with anti-roll control system, emergency brake warning comes with headlights and automatic rain wiper. 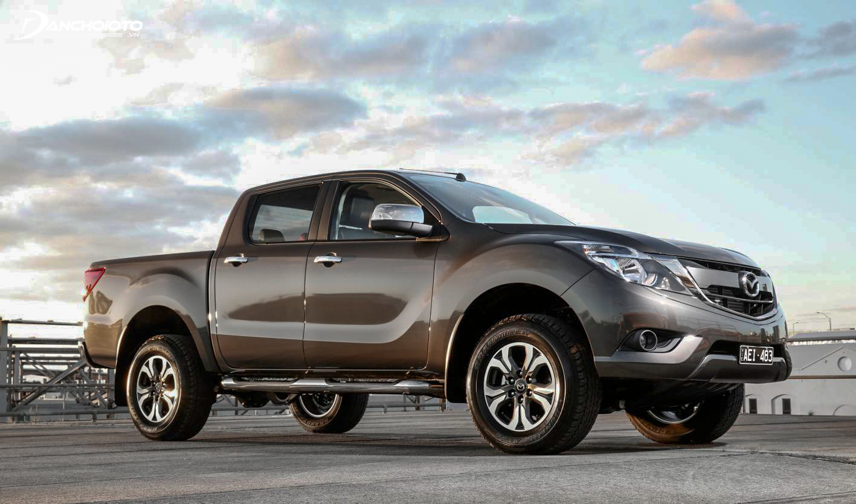 Mazda BT-50 has 6 airbags in the premium version

Should buy a Mazda BT-50 or Mitsubishi Triton pickup?

In Vietnam market, the price of Mazda BT-50 car is the lowest price of 680 million VND. While the price of Mitsubishi Triton ranges from 567 million to 790 million. 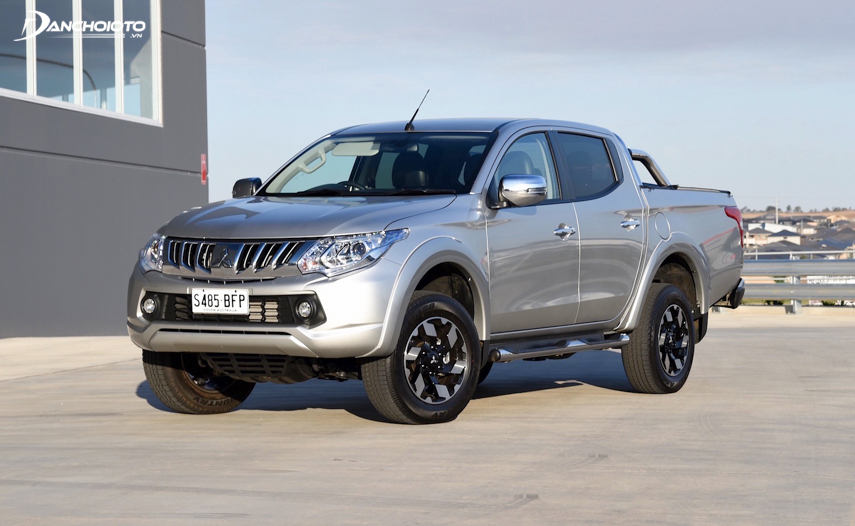 There are currently 5 versions of Triton sold in Vietnam

With the above price list, it can be seen that Mitsubishi pickup model gives customers a lot more options than Mazda BT-50 with only 2 versions. The lower versions of the Mitsubishi Triton have a relatively low price when compared to the Mazda BT-50. However, one thing worth considering is that Mazda’s pickup model has much more safety equipment than the Triton. Therefore, to choose whether to buy BT-50 or Triton, users need to consider the purpose and price range to choose for themselves.