We’re at a stage in Chihayafuru where a lot of stuff is happening at once, so it’s not like we get any real breather episodes.  But in the aftermath of an episode which saw a couple of “epoch-making events”, in Kana’s words (she seems to tack closer to the truth than any other boat in the series’ fleet) it was inevitable that the story had to tack a step back and breathe.  And that, happily, also means a chance to focus on some characters who haven’t been in the spotlight much this season. 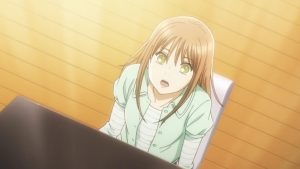 Obviously, the epoch event that’s causing the most immediate hangover is Arata’s shock confession to Chihaya.  What makes this situation especially complicated is that Sumire and Kana know and Taichi doesn’t.  Chihaya almost spills the beans while the group is studying for midterms, but aborts to pretending she was talking about Arata coming to Tokyo for college when she realizes Taichi actually doesn’t know.  Meanwhile Tsutomu is still grinding over a confession himself, the one he’s been too scared to make despite the fact that it’d almost surely be a success.  He’s trying to set the top class rank as a goal-motivator, but the fact that Taichi is standing in his way and that it seems kind of a cheap way to think about Kana gives him pause. 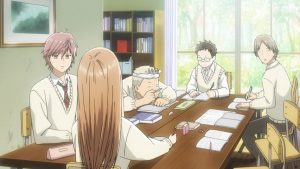 Those two are really the simplest and most pure element of the story, but they’re rarely in focus and they really aren’t here either.  Both Kana and Sumire are in a difficult position here.  Sumire’s conflict of interest is obvious, but at least she’s not pretending otherwise (to herself, anyway).  For Kana it’s extremely complicated.  No one has been more supportive of Taichi and Chihaya as a pair than she, and she knows Taichi is at a major disadvantage not knowing what happened.  But Kana genuinely doesn’t want to meddle, and there’s no guarantee telling Taichi won’t make things worse. 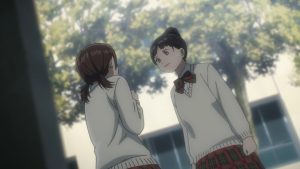 Chihaya – unlike Tsutomu or Taichi – really doesn’t have the academic luxury of being distracted by such matters, but distracted she is.  This has obviously thrown her for a loop, as clueless to such things as she is.  So much so that even when Sudo-san calls and eventually his club-mate Suou-meijin invites her to practice with him at their university (Todai, the most prestigious school in Japan), she’s still partially distracted by it.  Taichi invites himself along, and the pair of them head off (to the wrong campus) to meet the man who stands at the head of the sport of karuta. 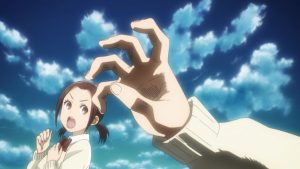 Suou-san is a fascinating puzzle, probably the most interesting person in the cast not named Taichi.  He’s interesting in the way he plays karuta, and in the way he lives his life.  It can’t be lost on him that by inviting Chihaya to practice with him he’s potentially providing a source of intel to Harada-sensei, but make of that what you will.  Suou, as it happens, only practices for two months out of the year (leading up to the Meijin championship).  The rest of the time he acts as a sort of den mother to the college (where he’s repeated a year four times) karuta club, who seem to view him with protective affection tinged with a hint of awe. 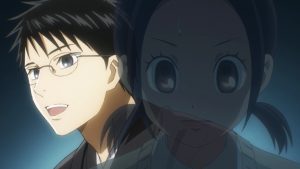 Suou (wearing an azuki bean T-shirt) is none too pleased to see Taichi has tagged along of course (he eventually gets paired off with Sudo for a match).  He’s also none too pleased to hear that NHK, for the first time in decades, won’t be showing the master final live (the real-life sport’s popularity had been in decline for many years until something – what could it be? – turned it around).  But once he kneels on the tatami across from Chihaya (who initially parks about 10 meters back) he immediately slips into game mode.  And that mode is unlike anything we’ve seen from anyone else in Chihayafuru. 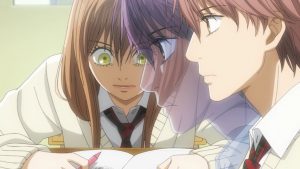 On the tatami and off, Suou is the series’ great enigma.  This impromptu practice match is probably as closely as we’ve ever observed him play.  Everything about him is quiet and deep.  He makes no move for multi-syllable cards, knowing he has 28 one-syllable cards himself.  He moves on dead cards, luring his opponent (Chihaya certainly not excepted) into faults.  He wins easily of course, by 14 cards.  But still, Chihaya manages not to become the mincemeat Sudo said she would, which the Meijin finds interesting.  Still, he tells her, she “can’t” be the queen – though just why that is he doesn’t say.  Suou is a crucible every serious karuta player in Chihayafuru has to overcome – not by beating him (which no one, to this point in the narrative, has ever done) but by coping with what their dealings with him reveal about themselves.