I shudder to think how much virtual ink I’ve spilled on Chihayafuru over the years – it has to be a tremendous amount.  But after better than 2,000 words on the first two weeks of this season (albeit it was three episodes) I’m determined to dial the verbosity back.  That this series has its claws firmly planted in me again is undeniable, but when I can sense my own writing pushing me into obsessiveness the warning lights start flashing.  Quite simply, Chihayafuru exhausts me – it’s exhausted me all along, but the experience has gotten a lot less pleasurable with the last couple years of the manga. 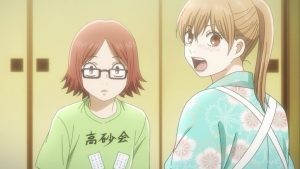 Last week’s double-episode was probably among the best material in the anime’s entire run, and I say that knowing full well what a high bar that is.  But the fact of the matter is, we’re pretty much right back in full-on tournament mode, which is exactly where most of Season 2 was spent.  And that was a big part of the reason why it represented a pretty big step down from S1 – it just became a slog after a while (relatively speaking).  Six years is certainly a long enough break to dull the fatigue and make all this feel fresh again, we’re only four episodes in, and there’s no doubt Morio-sensei and Suetsugu are very good at delivering this kind of material.  But in the end, it’s still kind of Groundhog Day. 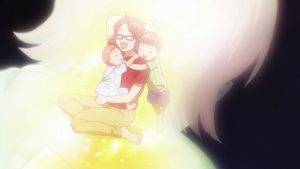 With that said, the matches were certainly gripping.  Chihaya’s tussle with the ex-Queen (4 times) Inukama-san went down to the last couple of cards, with the difference really being Chihaya’s evolving game sense and maybe a little bit of rust for Inukama.  Hiroshi-san took down Arata in a match that really wasn’t all that close (both in karuta and in general, Hiroshi is hugely underrated in this cast), and only Harada-sensei’s defeat at the hands of Arata’s sempai Murase-san kept it from being a Shiranami Society Sweep. 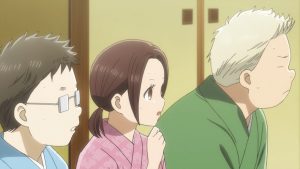 That’s because Taichi also triumphed – in a close, bitter match with the ever-unsporting Sudo-kun (will he honor the bet he insisted on?).  Naturally, Chihaya passed out immediately after her match and not only missed Taichi’s win, but his entire semi-final with Murase-san – and not only that, Hiroshi gallantly defaulted on their match in a stunning (and appalling, if you ask me – and Harada) gesture of team spirit.  I know this isn’t really her fault, but this whole sequence is so emblematic of what’s so frustrating about Chihaya as a character.  Taichi’s biggest match is going down and she sleeps through it, and she gets gifted a place in the final without a fight. 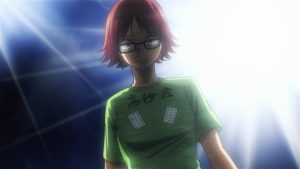 If there’s a silver lining here, it’s that Taichi got to play his match without Chihaya present, which as we know means he plays better karuta.  And he dominated Murase, who’d been worn down by the relentless if exhausted Harada-sensei.  Taichi’s evolving style of defensive karuta may not be Shiranami scripture, but it works for him – and defeating Murase with Arata watching had to feel extremely sweet to him.  He’s accepted his bad luck and decided to factor it into his approach, but obviously he can’t possibly have the advantage of Chihaya’s absence in the final since she’s his opponent – and a well-rested one at that, thanks to Hiroshi-san. 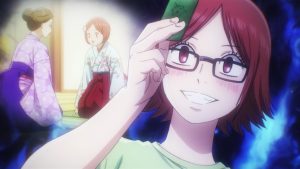 Just bear in mind we’re four eps in, and almost all of them have been set in a tournament that isn’s even the main event – just a warmup drill for the Master/Queen challenger tournament.  I may write too many words about Chihayafuru, but they pale next to Suetsugu-sensei’s expansiveness  – she never seems to do in one chapter what can be done in ten.  Being a fan of this series requires a tremendous commitment, and it’s one that I was finally forced to question before the return of the anime reeled me back in.  If there were any other series that does what Chihayafuru does, it would be a lot easier to walk away, but let’s face it – you just can’t get anime like this anywhere else, dammit…