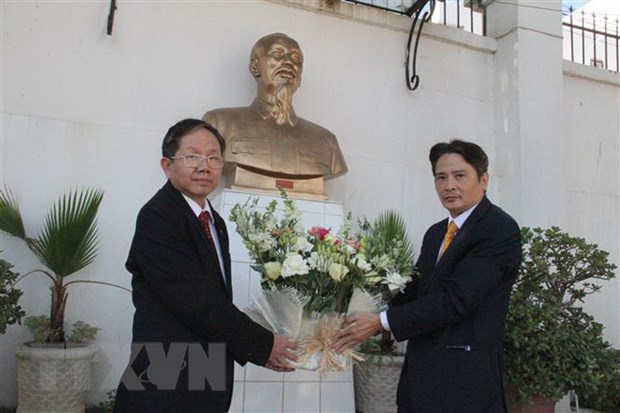 Offering flowers in memory Ho Chi Minh president at Ho Chi Minh Boulevard, the Algerian capital on the occasion of the 130th Anniversary of his Birth at the Embassy of Vietnam in Algeria, May 19, 2020 in Algiers. (Photo: Tan Dat / VNA)

On 19/5, Vietnam Embassy in Algeria held a flower offering to commemorate President Ho Chi Minh in Ho Chi Minh Boulevard in the capital Algiers on the occasion of his 130th Birthday.

Attending the ceremony are all officials and employees of the Embassy and the agencies next to the embassy.

Mr. Mediani Toufik – Chairman of the People’s Council of Raïs Hamidou Ward in Algiers, where the Boulevard named Uncle Ho was also attended.

After the flower-giving ceremony, all officials and employees of the Embassy and the agencies next to the Embassy attended the seminar with the topic “The important role and great contributions of President Ho Chi Minh, beloved leader of the Vietnamese nation for the formation and development of Vietnamese diplomacy, making a positive contribution to the liberation of the peoples, promoting friendship between nations, for peace vase, developed in the world. ”

Many stories about President Ho Chi Minh’s diplomatic style were shared at the seminar to prove that Ho Chi Minh’s thought and diplomatic style is a combination of patriotism and popular culture. Vietnamese ethnic traditions and diplomacy, along with a vast knowledge of Eastern-Western culture, have brought a unique identity to Vietnamese diplomacy.

The seminar took place in a lively, intimate atmosphere. Officials and staff of the Embassy and neighboring agencies feel proud and more aware of their responsibility to study in his example./. 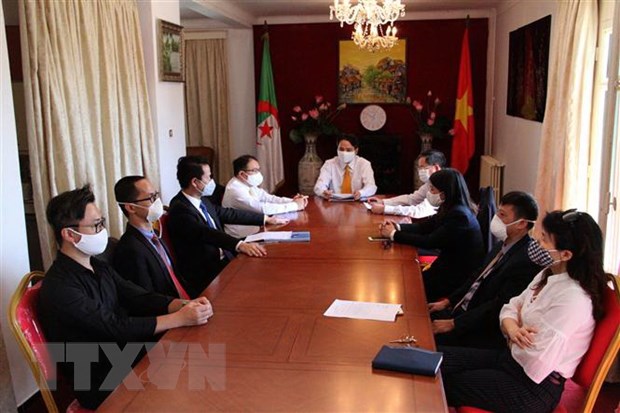 Discussion with the topic ” The important role and great contributions of President Ho Chi Minh, the beloved leader of the Vietnamese nation for the formation and development of Vietnamese diplomacy, ” May 19, 2020 in the capital Algiers. (Photo: Tan Dat / VNA)

Also on May 19, the Venezuelan government celebrated the 130th anniversary of President Ho Chi Minh’s birth, with the participation of the ruling Unified Socialist Party (PSUV) leader, officials. government and the staff of the Vietnamese diplomatic mission in Venezuela.

According to the Vietnam News Agency correspondent resident in Latin America, during the ceremony at the monument of President Ho Chi Minh at Caracas Boulevard, PSUV First Vice President Diosdado Cabello highlighted the contribution of the outstanding leader of the people. Vietnamese people in the struggle for national independence, as well as the love that the Vietnamese people have for him.

On the same day, the Venezuelan government sent a congratulatory message to the Party, Government and people of Vietnam on the occasion of the 130th birthday of President Ho Chi Minh, the talented leader of the Vietnamese Revolution and one of Outstanding figures of the world in the 20th century.

The message read: “This is an opportunity to remember the wise teachings of Uncle Ho, who always insist on seeking development on the path of socialism, the path that brought the Socialist Republic of Vietnam Men get a worthy position in the world today. “./.

A Vietnamese woman was killed by an American husband, hidden in the refrigerator

Post Views: 111 When Ahmad Zahhi left, he shook hands with supporters. Disturbing all day, Prime Minister and Prime Minister Tun Mahathir did not announce the future of the Prime Minister tonight, but it is known that the “National League” has at least 140 members of parliament. This morning (23), it is rumored that Azmin […]

Post Views: 47 One patient was transferred from Seoul Medical Center to another hospital in Korea on February 27. (Photo: Yonhap) According to the Korea Centers for Disease Control and Prevention (KCDC), Korea today recorded 571 new cases of coronavirus infection (Covid-19), bringing the total infections in this country to 2,337. Two days earlier, the […]