Canon announced the RF 50mm f/1.2L USM at the same time as the EOS R, its first full-frame mirrorless camera. Consequently, it has the Canon RF lens mount that has a diameter of 54mm and a flange depth of 20mm. As part of Canon’s L series, it is designed for professional photographers who want a bright standard prime lens.

Canon has constructed the lens from 15 elements in 9 groups, with 2 large-diameter ground aspherical lens elements, and 1 glass-molded aspherical lens element for better image quality into the corners of the frame when the aperture is wide open. In addition, there’s an Ultra Low Dispersion (UD) lens element to reduce chromatic aberrations. The RF 50mm f/1.2L USM also features Canon’s ASC (Air Sphere Coating), which is designed to improve image quality in backlit situations by minimizing the reflections that cause flare.

The closest focusing distance is 40cm, which produces a magnification factor of 0.19x. The lens is also dust- and water-resistant, has a rounded 10-blade aperture, and a filter thread diameter of 77mm.

We tested the RF 50mm f/1.2L USM lens on the Canon EOS R, the company’s 30.3Mp full-frame mirrorless camera, and it achieved an overall score of 38.

As the sub-scores show, the lens controls chromatic aberrations very well and transmission and distortion control are both fairly good. However, the unusually large maximum aperture has an impact, pulling down the sharpness in comparison with the f/1.4 and f/1.8 optics, and vignetting is visible. Nevertheless, the RF 50mm f/1.2L USM compares well with Canon’s previous 50mm f/1.2 lens.

As the Canon RF mount is new, there’s currently only a very limited range of lenses that are directly compatible. However, Canon offers a collection of adapters to enable EF-mount optics to be used on its new full-frame mirrorless cameras. This makes it interesting (and possible) to compare the new RF 50mm f/1.2L USM with some Canon EF-mount optics as well as with some equivalent lenses for Nikon and Sony full-frame cameras. 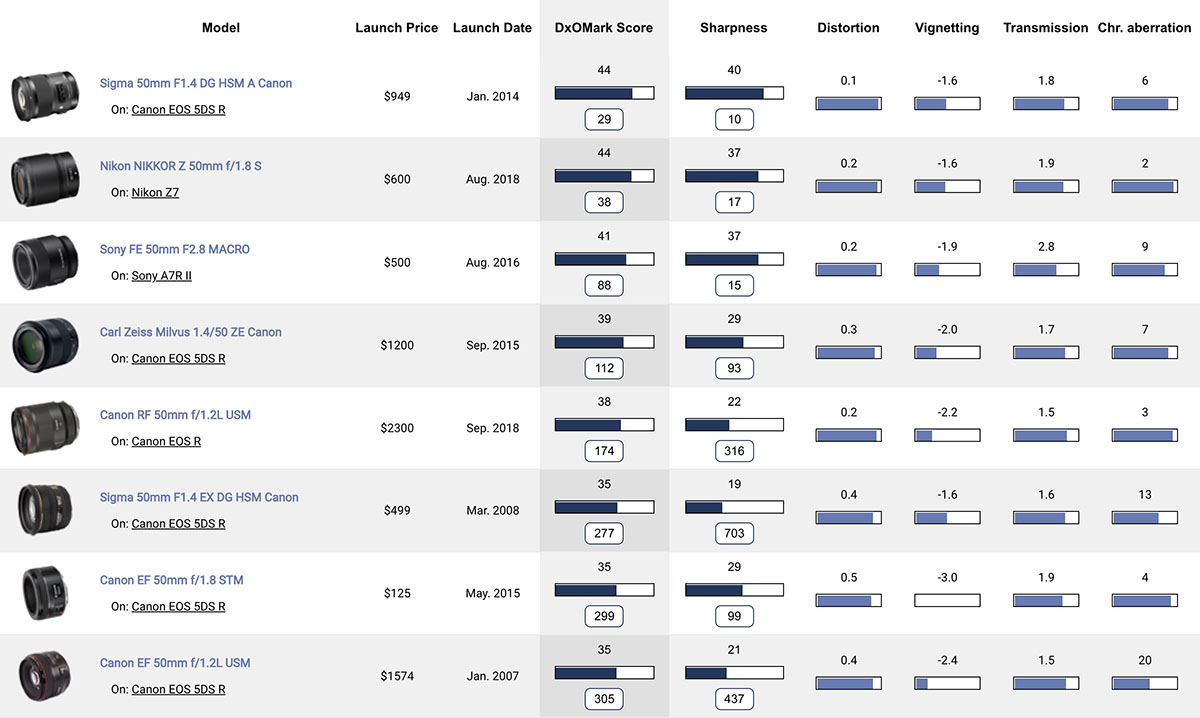 Switching from the 5DS R to the Canon 5D Mark IV takes the EF 50mm f/1.2L USM’s overall score down to 31, with the sharpness falling from 21Mp to 19Mp. With the exception of a minor improvement to transmission (1.4 TStop vs 1.5 TStop), the other values remain the same. Similarly, the Sigma 50mm F1.4 DG HSM A’s sharpness score drops from an exceptional 40Mp to 25Mp when changing from the EOS 5DS R to the 5D Mark IV. That’s still higher than the Canon RF lens’s score, but it shows the difference that camera selection can make.

Interestingly, the Canon RF lens, like the Sigma optics, puts in its best performance at f/2, while the EF lens is best at f/1.2.

The Sigma lens is the clear leader of the three optics for sharpness. However, even wide-open, the RF 50mm f/1.2L USM does a great job of maintaining uniform sharpness across the image frame. The older Canon lens can’t match it, whether mounted on the Canon 5DS R or on the 5D Mark IV. None of the lenses has a major issue with astigmatism, but the new RF optic keeps it under particularly good control.

The RF 50mm f/1.2L USM is sharpest between f/1.8 and f/8. The impact of diffraction starts to become more noticeable by f/11, bringing the center sharpness down below that of the other two cameras.

The graph below shows the width of lateral chromatic aberration for each lens at its widest aperture. The two measurements for the EF 50mm f/1.2L USM cross the 5µm line, at which point fringing usually becomes noticeable at around 40% of the way from the center (0%) of the image to the corner (100%). More importantly, there is more than 10µm difference between the red channel and the blue channel at some points across the frame. The fringing is likely to remain visible along high-contrast edges close to the corners of the frame, but the corners themselves are better controlled.

Meanwhile, the Sigma 50mm F1.4 DG HSM A has noticeable fringing only in the far corners of the frame, but it still can’t match the performance of the Canon RF lens in this regard.

Distortion isn’t usually a major issue with 50mm lenses, and it’s clear that this isn’t a problem with the Canon RF 50mm f/1.2L USM. A positive value of 0.2% shows there’s a very slight degree of barrel distortion, but it’s unlikely to be noticed even when shooting subjects such as railings and architecture with a strong linear element. The old Canon EF 50mm f/1.2 lens, however, registered 0.4% distortion, and this could result in more noticeable bending of straight lines near the edges of the frame. It would be subtle, but a keen eye might spot it.

It would be unusual for a very wide-aperture lens not to suffer from some vignetting, and each of the lenses exhibits it at their wider aperture settings. The 1/3-stop difference in the maximum aperture of the Canon RF 50mm f/1.2L USM and the Sigma 50mm F1.4 DG HSM A makes for about a 2/3-stop difference in the brightness of the farthest corners of the image. However, that’s better than the Canon EF 50mm f/1.2 lens, which produces corners that are about a full stop darker than the Sigma optic.

The shape of the fall-off curve in the graph below is also of interest. While the Sigma Art and Canon RF lenses show a fairly steady decline in corner brightness, there’s a steeper decline in the outer edges of images from the Canon EF lens. That means the corner shading is likely to be more noticeable, and to have a sharper transition with the exposure.

While vignetting is an optical flaw, a gradual darkening of the corners can be attractive, particularly in portraits. Nevertheless, corner shading to the tune of over 2EV is quite extreme. Closing down to f/4 reduces the RF 50mm f/1.2L USM’s worst vignetting to around 0.5EV, but unlike the other two lenses, closing down further doesn’t have a significant impact.

In many instances, vignetting of 0.5EV is likely to go unnoticed, but it may be spotted when shooting a subject against a pale, uniform-tone background.

Conclusion: A solid upgrade on the EF version

There isn’t a huge pool of f/1.2 50mm lens to compare the Canon RF 50mm f/1.2L USM against, and most of its competitors have a maximum aperture of f/1.4 or f/1.8. If optimum image quality is your major concern, then the Sigma 50mm F1.4 DG HSM A makes for a better choice, although it can’t be mounted directly on Canon’s mirrorless cameras. However, if you need the extra 1/3-stop of light, then the RF lens makes a good solid proposition that is a step up from the older Canon EF 50mm f/1.2L USM.

It will be very interesting to see how this lens compares against the Nikon Nikkor Z 58mm f/0.95 S Noct coming later this year.

In this review, we have compared the Canon RF 50mm f/1.2L USM to its EF-mount predecessor, and from a quality perspective, to its most likely rival from another brand. Remember that the lenses are intended to be used on different camera systems and mounts, so the comparisons may not be strictly applicable.

As usual, you can create your own comparisons and in-depth analyses using our interactive image lens comparison tool.

Is the positioning strategy new today?

Post Views: 44 What brand positioning strategy today is more updated than the original concept that came out in 1972? Nothing new under the sun. But it takes 45 degrees in the sun to know how hot the sun is. I emailed Mr. Al Ries (American brand guru, father of the Brand Positioning concept) if […]

Yamaha MT-09 2020 was launched with a new “outfit” attractive

Post Views: 215 Yamaha MT-09 also known as the Biker community with the glamorous name “King Of Throttle” roughly translated as the king of torsion is one of the highly rated Naked bikes. Possessing top-notch 3-cylinder Crossplane engine from Yamaha, MT-09 has established itself as one of the most exciting in the segment. Recently, this […]

Post Views: 50 Realme’s upcoming C3 smartphone just cleared FCC and even though there’s not much info in those listings, there are a few takeaways from the documents. First and foremost, clearing the FCC means that launch is pretty close. Secondly, it’s evident that the handset will come out with the latest ColorOS 7 based […]