Camera sales are about to decline, just 8% of 10 years ago – VnReview


Digital cameras are so degrading that it’s hard to fix them.

Technology page PetaPixel Just published a pessimistic forecast about the development of the camera industry. According to Canon’s vice president, Minoru Tanaka, the Japanese company is preparing for a dark future as the total global shipments of cameras plummet. Chances are, compared to 10 years ago, sales will only drop more than 8% only. The pandemic even exacerbated the situation.

In 2010, global camera sales totaled 121.5 million units, largely based on compacts. However, the popularity of smartphones makes compact cameras less and less living land, and sales have been steadily declining year by year. By 2019, globally only 15.2 million digital cameras have been sold. In particular, the number of interchangeable lenses cameras is slightly higher than compact.

In fact, according to the illustrative chart from Statista, 2018 was the first year that interchangeable lens cameras exceeded compact sales. This trend continues to be slow and increasingly evident through the fact that manufacturers are also gradually abandoning or shrinking fixed-lens cameras. Customers’ demand is now mainly focused on the lens replacement type, PetaPixel assesses that demand has been stable for more than a decade.

According to Canon vice president, lens fixing type will continue to fade. Therefore, it is highly feasible to forecast total global camera sales to fall below 10 million. Canon is ready to cope with such a bleak future, said Toyo Keizai magazine. The company will focus on the interchangeable lens segment, investing in video recording capabilities such as 8K recording. 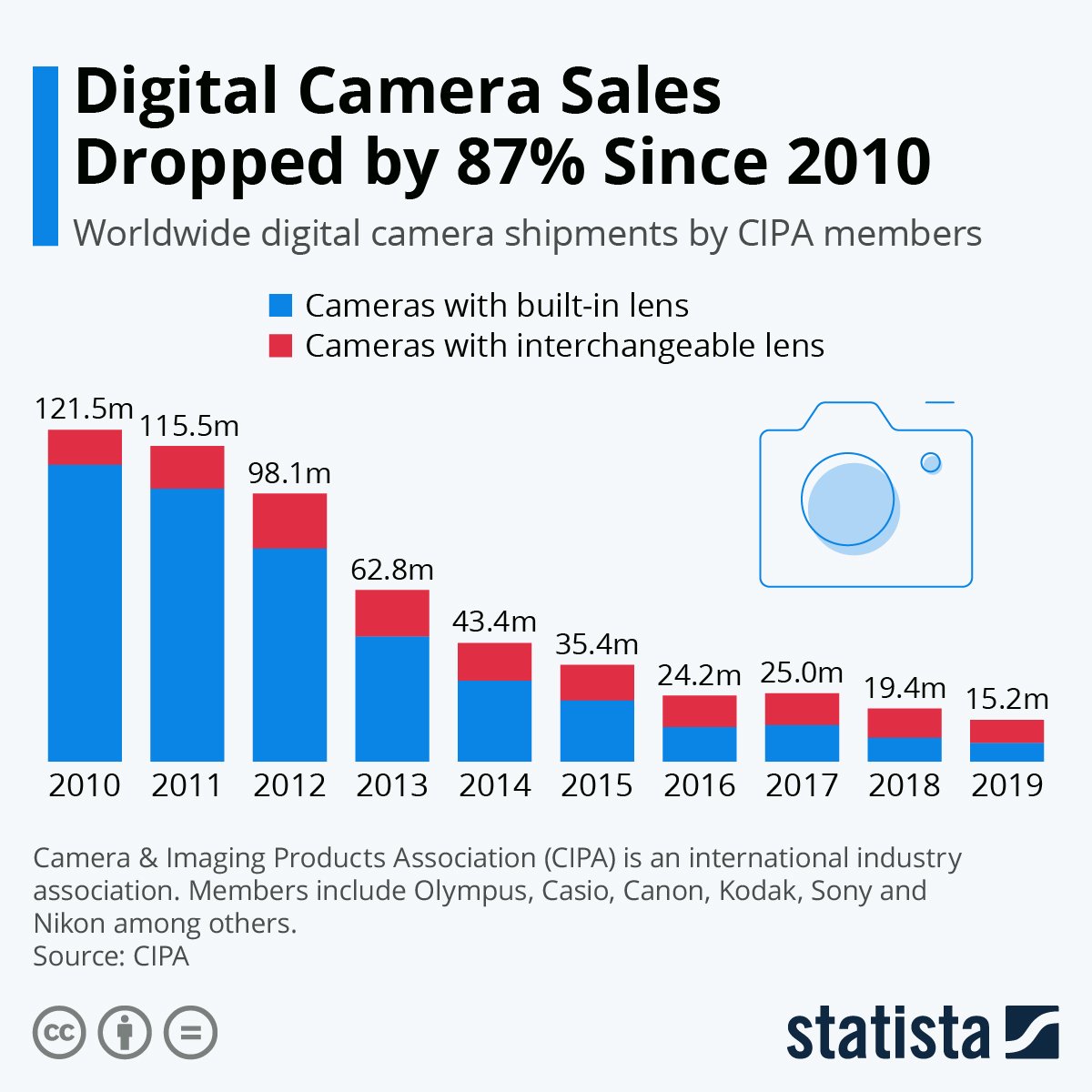 Global camera sales are about to fall below 10 million units (photo: Statista)

Besides, they also launch products that can exist in parallel with smartphones. In 2020, they launched the PowerShot ZOOM and previously iNSPiC REC in 2019, which are both low-cost products, not traditional cameras. This is the direction to explore the company’s market reaction, assess the potential of different ideas.

That said, although Canon continued to ensure the development of the camera segment in the gloomy environment. The group was soon prepared to deal with an irreversible market downturn. Canon has outlined its future plans for the next five years, betting growth on security cameras, medical equipment, and industrial machinery that makes OLED panels.

In mid-2020, the industry was shocked by the news that Olympus withdrew from the camera business, handing the unit over to a Japanese investment fund. Olympus admitted to trying to save it by streamlining the apparatus, reducing operating costs, and focusing on the high-value product segment. But in the end, they were still at a loss for three years in a row and had to give up.

In its October financial report, Sony Corporation also admitted that revenue from both civil cameras and professional equipment was declining. Sony has stopped releasing digital camera sales for the two consecutive quarters, showing less positive signals. However, the electronics business still recorded profits of more than half a billion dollars, thanks to the rebound in TV sales and the smartphone segment with profits of more than $ 90 million.