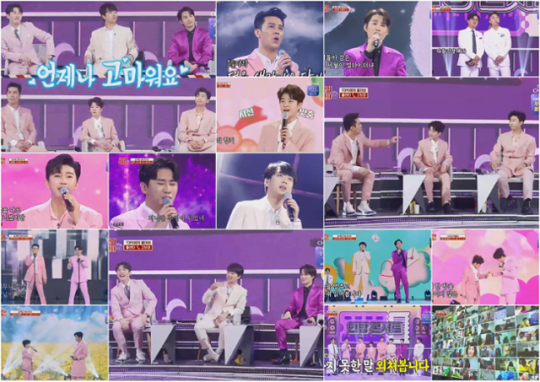 ‘Call Center of Love’ TOP6 Lim Young-woong, Young-tak, Lee Chan-won, Jung Dong-won-Jang Min-ho, and Kim Hee-jae shed tears of emotion in the home theater by holding the’Untact Home Concert’ to wish for the health and happiness of the viewers.

TV CHOSUN broadcast on the 12th,’I will sing the requested song-Call Center of Love’ (hereinafter referred to as’Call Center of Love’) for 42 episodes, the national rating of 13.9% based on Nielsen Korea, and the highest rating per minute soared to 15.7%.

On this day’s broadcast, TOP6 decorated new and fresh stages prepared only for the’Untact Home Concert’, along with songs that had been enthusiastically sung at the’Call Center of Love’ so far, providing plenty of things to listen and enjoy.

Top 6, who wore a pink suit and showed off her bright beauty, opened the splendid opening of the’Untact Home Concert’ by singing’Please write love with a pencil’ and’Give luck’ in front of an untouched audience of 300 people. And, starting with Lee Chan-won’s’Mang Bu-seok’, Young Tak’s’My Heart Beside You’, and Lim Young-woong’s’Fall Down’ made everyone’s shoulders shake.

Next, the’Ask TOP6′ section where viewers ask TOP6 what they usually wondered about, and “What is your favorite prop used on the stage of’Love Call Center’?” and “Six people can change their bodies after an accident. If there is, who would you like to change with?”, TOP6 delivered a unique and witty answer, making the site a sea of ​​laughter.

At the time of the festival, Jeong Dong-won made a fresh trot stage with’Love of Cheongpodo’, and Kim Hee-jae showed off his splendid dance skills with’Love’. The atmosphere was changed, and Jang Min-ho’s ‘Smoky Bald Head’ resounded, coloring the home theater with emotion, and the duet stage in which TOP6 was paired continued, raising the atmosphere to the peak.

Lim Young-woong sang ‘Become a Thousand Winds’ with Jeong Dong-won and gave a different impression, while Lee Chan-won and Kim Hee-jae whispered ‘Love Letter’ with a soft voice to give a lovely chemistry.

Top 6 big brothers line Jang Min-ho and Young-tak overwhelmed the gaze with their charisma singing’Because of Regret’ over a standing microphone. Lastly, Jung Dong-won drew hot applause by singing’past, present and future’, which TOP6 selected as the song they want to listen to with everyone.

In addition, emotional medleys such as Lim Young-woong’s’a piece of clouds lying long after time’, Lee Chan-won’s’Galmuri’, and Kim Hee-jae’s’Hoeryongpo’ resounded, giving the impression and resonance.

In addition, TOP6 delivered warmth through a fan service that untacted audiences immediately requested songs on the spot. Various requested songs of all genres poured in, and Jang Min-ho sang’I’m Me’, Lim Young-woong sang’Love TWO’, and Kim Hee-jae sang’Hee-jae’ to pour out resilience.

While the corner was ended with Young-Tak’s’Iraye’ and Jung Dong-won’s’Road and Return’, Young-Tak surprisingly released the stage of the new song’Bullet’, which expressed the wish to be a comforter to fans for the first time on the broadcast I got the same applause.

On the other hand, when the prelude of the master song’You Know My Name’, which sang with tears in the’Call Center of Love’, sang the craze for reverse driving, resounded, holding her face again as if she was crying, and finally going to the back of the studio to see as she pours tears. It made the tooth’s breasts eaten.

As a result, Yeong-woong Lim first sang’Song is My Life’, and then Jang Min-ho, who captured all of his emotions, was again successful in completing the song.