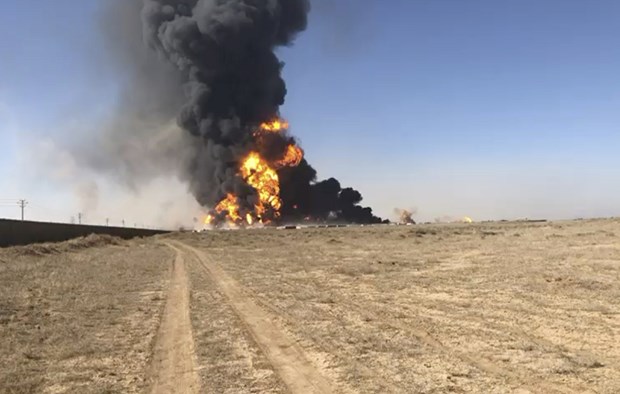 The big fire was visible from far away. (Photo: AP)

On February 13, dozens of tankers carrying oil with fuel worth many million dollars were burn at the biggest border gate for trade between Afghanistan and Iran.

The blaze broke out in the early afternoon at the port of Islam Qala, about 120 kilometers from the Afghan city of Herat, covering oil tankers that were anchored nearby after crossing the border. The cause of the incident is still unknown.

Herat City Chamber of Commerce, Mr. Younus Qazi Zada, said: “There are about 200-300. Tankers There and we managed to save some, but most were engulfed by fire and the flames were so large that no one could reach within a radius of a few kilometers … initial prediction damage was up to millions of dollarsBut we still have to wait until fire was extinguished to properly assess the damage ”.

At least 17 injured people were taken to hospital, including some severely burned, according to rescuers. Meanwhile, West Herat provincial government spokesman Jailani Farhad said dozens of tankers had been on fire. Local officials did not have the necessary equipment to control the fire, so they asked the Ministry of Foreign Affairs of Afghanistan to call on the Government of Iran to help contain the fire.