Build is Microsoft’s annual developer conference, and this year, after day one of the event, alongside familiar products, Visual Studio and .NET have become the “stars” attracting a lot of attention. attention from professionals and the community. Specifically, in the framework of the first day of Build 2019, Microsoft has revealed quite a lot of details about new Visual Studio features with many notable improvements, and announced an update roadmap for .NET and launches ML.NET 1.0. 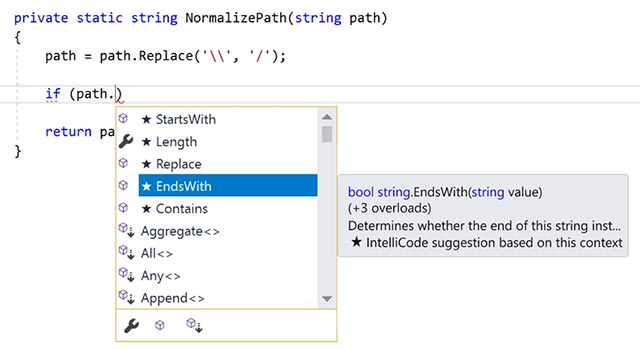 At Build this year, the software giant shared more information about some of the features of IntelliCode, currently available for C #, XAML in Visual Studio 2019; for Java, JavaScript, TypeScript, and Python in Visual Studio Code. In addition, IntelliCode is also included by default in Visual Studio 2019, starting with version 16.1 Preview 2. Additionally, Microsoft has also introduced an algorithm that can track edits locally. – Repeated editing detection – and suggesting other sections that should also be edited in the same way.

But those are just the “tip of the iceberg”.

Visual Studio should be able to operate remotely

Microsoft says it is testing a number of features that will allow developers to work anywhere, on any device. And on the first day of Build 2019, the company announced a private preview for three new features to realize remote working capabilities on Visual Studio, which are developer tools powered by A developer environment is hosted in the cloud, and a browser-based web mashup. Perhaps Microsoft is looking to take steady steps in a context where the ability to work remotely flexibly is considered the trend of the technology world in the near future.

Visual Studio Live Share – one of the most requested features on GitHub will be an individually developed remote feature. Visual Studio Remote Development is essentially an alternative to using SSH / Vim and RDP / VNC, allowing Visual Studio users to connect their local tools to a WSL, Docker, or SSH environment. This tool currently has support for C # and C ++, and was introduced in the private preview above. According to Microsoft, the feature of working remotely when fully applied will give users many advantages, such as the ability to work on an operating system contrary to the goal of deploying applications of the user. use, and can take advantage of higher-end hardware and higher multi-device mobility.

The next private preview will provide developers with fully managed, on-demand, cloud-hosted development environments. The cloud-hosted developer environment helps developers not spend too much time deploying new team members, and moving between tasks. install dependent components and encode. The new service will essentially let you create a cloud-based environment whenever you need to work on a new project, take on a new assignment or review a PR. And, of course, these environments can also be connected to Visual Studio 2019 as well as Visual Studio Code. 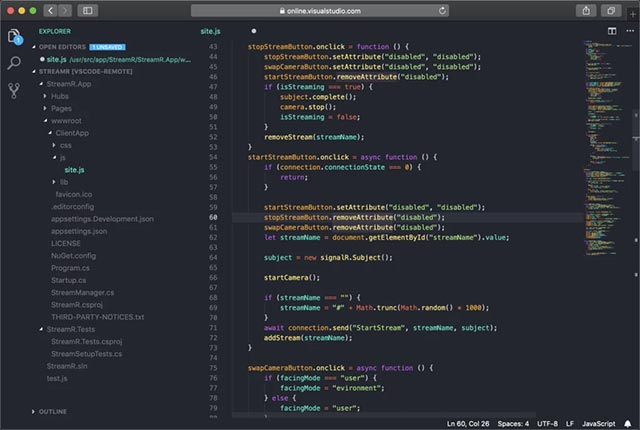 On the first day of this year’s event, Microsoft also announced that it would be skipping .NET 4 to avoid undue confusion with the .NET Framework (which has been in version 4 for years), which goes straight. NET 5. In the future, developers will be able to use .NET to “target” Windows, Linux, macOS, iOS, Android, tvOS, watchOS, WebAssugging, and more. With that said, .NET 3 will be upgraded straight to .NET 5, with the addition of new .NET APIs, runtime capabilities, and language features. The move up to .NET 5 makes it the highest version Microsoft has ever released, and shows Microsoft’s ambitions to make .NET 5 the future of the .NET platform.

Basically, Microsoft has fulfilled the three promises they made on .NET 5, which are:

In addition, .NET 5 will also provide both Just-in-Time (JIT) and Ahead-of-Time (AOT) compilation models. In particular, JIT will bring better performance for desktop / server workloads and development environments. AOT will also have faster boot capacity and a smaller footprint, suitable for mobile devices and IoT. In addition, .NET 5 will provide a unified tool chain supported by new types of SDK project and flexible deployment model (parallel and closed EXEs). 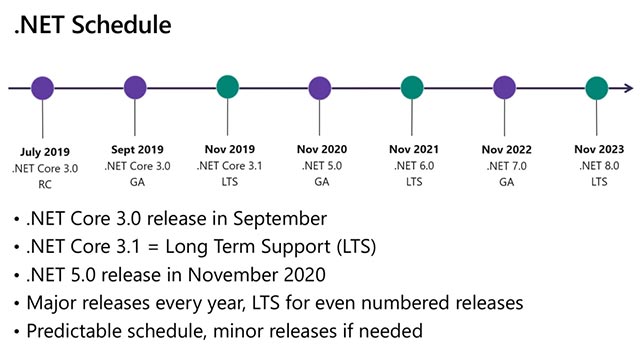 The .NET update roadmap has also been shared by Microsoft. First, .NET Core 3 will be released in September. Next, .NET 5 will ship in November 2020, with the first preview available in the first half of 2020. Microsoft then plans to release a major version of .NET once a year, fixed on November.

“With .NET 5 your code and project files will look exactly the same no matter what kind of application you’re building. You will have access to the same runtime, API and programming language support for each application, ”said a Microsoft representative. 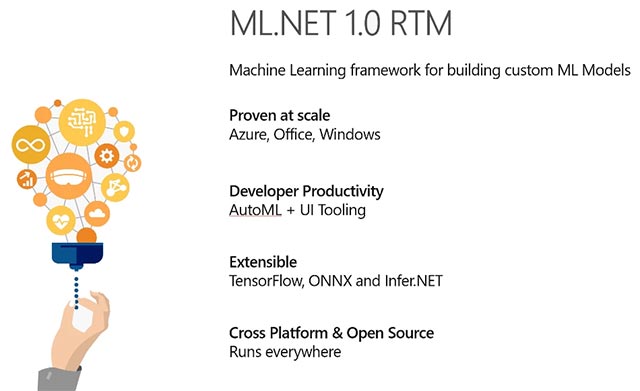 Temporarily put aside the private preview and update route. Another very noteworthy piece of information during Microsoft’s product launch on the first day of Build 2019 is the appearance of ML.NET 1.0. Not out of trend, ML.NET 1.0 will also hit on general availability. You can download ML.NET 1.0 right now here.

If you haven’t already, ML.NET is an open source and cross-platform framework that runs on Windows, macOS and Linux. The in-house version of ML.NET has been used for nearly a decade to enhance the capabilities of Microsoft products such as Powerpoint’s Design Ideas, Windows Hello, PowerBI Key Inflencencers and Azure Machine Learning.

This framework brings machine learning closer to .NET developers, allowing them to build and apply AI to their products through custom machine learning models. ML.NET allows developers to create and use machine learning models that target specific purposes such as opinion analysis, problem classification, prediction, proposal, fraud detection, and classification. images, etc. ML.NET comes pre-packaged with a variety of transforms for data processing, ML algorithms, ML data types, as well as extensions that provide TensorFlow accessibility for Deep learning and ONNX scenarios, among many others.

With ML.NET 1.0 released, Microsoft plans to roll out a few more features that follow, including:

Additionally, Microsoft is introducing new ML features and tool experiences in Visual Studio. Automatic machine learning (AutoML) will be provided with a set of data, which will help automatically find the algorithm selection phase and the algorithm to build best-performing models. You can take advantage of the AutoML experience in ML.NET with the ML.NET command line interface (CLI, now available in preview), ML.NET Model Builde (Visual Studio extension already available in preview) , or using the AutoML API directly.

Post Views: 32 Since launching its Galaxy S10 smartphones back in March, Samsung has been offering US customers plenty of chances to save good money on the handsets. Now, Samsung is doing this again, taking up to $200 off all Galaxy S10 models, and there are no trade-ins or super-restrictive requirements involved here. You can […]

Teach you how to fix slow Wi-Fi on Android phones

Post Views: 64 Are you searching for the best SSD laptop? Don’t worry! you’re the right place. In this article, we have reviewed 8 best laptops with Solid-State Drive with high-end specifications. These days, hundreds of SSD laptops are available in the market from medium to high budget range. Compared to the past few years, […]