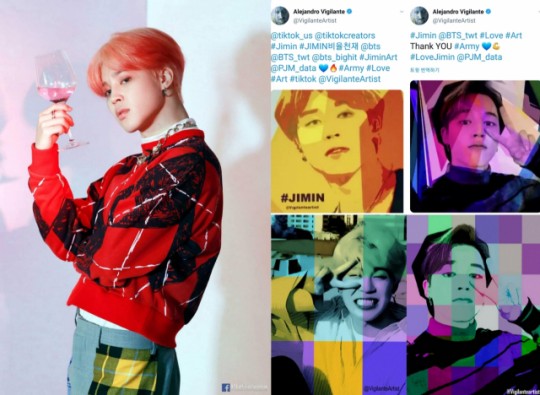 The creator of the ‘i-art movement’ and Argentinean pop artist Alejandro Vigilante has become a hot topic on Twitter on the 20th, when he articulated BTS Jimin’s artwork.

This is a pop art work that was created by reinterpreting Jimin’s selfie from the artist’s point of view, and Jimin’s solo song, ‘Serendipity’ in the 8-second video, was used as background music to give fans ‘serendipity’.

In addition, another work on the theme of Jimin was posted on Twitter and TickTalk along with the original ‘Serendipity’. Fans who saw this were amazed that it was a beautiful piece and thanked him for sublimating Jimin into art.

Visual artist James Jean, who recently won the Eisner Award and Harvey Award for Best Cover Artist for 6 and 4 years, has pressed “Like” on BTS Jimin’s photo. As the facts became known, it became a hot topic on SNS and attracted attention.