This episode of Boku no Hero Academia (and the last one too, really) is living proof that anime episodes don’t exist in a vacuum.  And the same applies to any narrative fiction that attempts continuity.  Looking at these last two eps individually, I would be hard-pressed to think of anything I’d change.  They were brilliantly executed and deserve copious praise for that.  But – for me at least – they don’t quite sing like the very best episodes of this series do.  And the reason they’re one step below the top tier has nothing to do with what happened in the eps themselves, and everything with what led up to them. 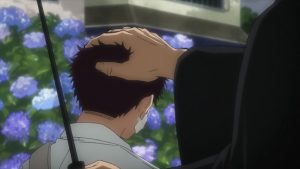 Needless to say, it was a bit of a struggle to hold my tongue after reading some of the comments last week.  I’m not sure the criticism of Horikoshi that there are no consequences in this series is necessarily fair in the first place.  I mean, every major arc has seen some meaningfully major characters fucked up in some way, but more than that – Toshinori is living proof that there are consequences in this mythology.  Look at what he is now and what he was, and tell me there are no consequences for those who live to do good for others.  But that point really became moot with what happened this week. 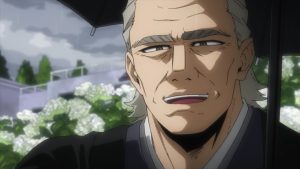 We might have been seeing Midorioya’s name on the casualty list (not likely of course, given that he’s the narrative hero) had Aizawa-sensei not been brought to the surface in the nick of time.  The nature of Eri’s quirk makes Eraser and his even more crucial – he’s literally the only one who can stop her from going out of control and wreaking devastation with Rewind.  Frankly I think some of the criticism of her as a plot device is overwrought.  Yes, Rewind is – in theory – a pretty game-changing power.  But right now it’s nothing more than a biohazard, because she can’t control it and there are no signs that will change anytime soon.  I also find it odd that people are making assumptions about what Rewind can and can’t do, when the scope – and limits – of Eri’s ability haven’t been fully explored. 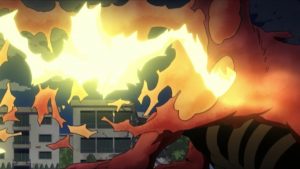 That said, one of the interesting questions posed by this arc’s denouement is just how Deku managed to make Nighteye’s Foresight a lie.  I initially wondered (and I still don’t think it’s been disproven) whether Rewind had the power to cancel out Foresight – to change the future in ways Nighteye couldn’t see.  But on his deathbed Nighteye speculates that it’s “energy” – not Izuku’s specifically, maybe, but that of everyone who’d been fighting with him channeling itself through that terrier body.  That’s rather poetic but I’m not quite sure how it makes actual sense – for now, this one is still a mystery.  And given All Might’s role in all this, a mystery that’s absolutely at the heart of Boku no Hero Academia. 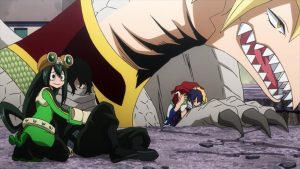 Nighteye’s death was certainly gut-wrenching.  And the way it played out, with his vitals slowly ticking down on the monitor just barely in shot, was quite chilling.  But if any one element of this episode was robbed of potential greatness by the shortcomings of “Shie Hassaikai’s” buildup, it was Nighteye’s death.  In an arc needing more of it he was pathos galore, the most compelling part of the story.  I’m glad Toshinori came to his bedside in the end, but the weight of regret that poor man has to carry with him is growing heavier all the time, and he no longer has the hero’s body to support it gracefully.  I would be worried for Toshinori’s future, even if Sir Nighteye’s Foresight had never happened. 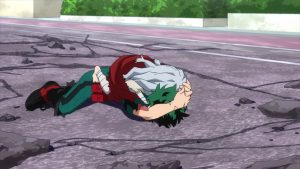 Now, the focus turns back to the real threat all along – the League of Villains.  As antagonists Overhaul and Shie Hassaikai never quite measured up to the League or certainly Stain – Chisaki was basically a mobster with delusions of grandeur.  If he’d gotten some of the development he got late in the arc near the beginning he would have been a more commanding presence.  But Shigaraki is and always was the far greater figure, even if there are rumblings of discontent in his organization too (having absorbed the mantle of Stain, those loyal to him can plainly see that the League isn’t exactly living out his ideals). 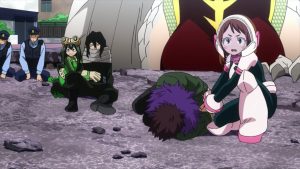 With the League about to go on the offensive it’s not as if the good guys have a lot of time to rest, but boy, they could sure use one.  Many have suffered major injuries and Mirio is quirkless thanks to Chisaki’s misuse of Eri’s power.  And Nighteye’s death is a major emotional blow not just to All Might but to Mirio too.  And even Deku, who for all the pain and injury he’s seen and suffered himself, has yet to suffer the death of someone this close to him.  There are consequences to living the life he’s chosen to lead – but then, there always have been.

True Mothers – All the Anime