I’ve got nothing against rugby (though I don’t have much for it, either – I couldn’t tell a scrum from a maul) but the one-week hiatus it caused for Boku no Hero Academia came at a pretty lousy time.  This episode promised one of those tentpole moments that manga readers wait for, and this season will be a little more hard-up for those than the previous three.  Bones has always delivered handsomely when those landmarks arrived, and that tradition continued here – old director or new, BnHA still knows how to hit in the clutch (to use an analogy from a sport that’s actually interesting). 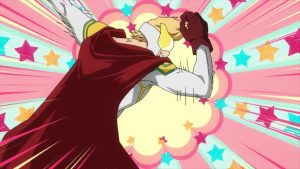 Before that moment arrived though, there was the cliffhanger teased at the end of Episode 3.  This was a pretty tense moment (and very well-adapted) thanks largely to the unspoken conflict between Mirio and Izuku about how to handle it. Both of them recognize Overhaul immediately, of course – but their reaction reflects both the difference in their temperament and experience.  Tintin (hero name: Lemillion) is only two years older than Deku but it seems like much more.  He knows the protocol is to avoid doing anything to arouse Chisaki’s suspicions and bring Sir Nighteye up to speed, avoiding any confrontation.  Deku’s instinctive emotional reaction is understandable, but reflects his immaturity and inexperience. 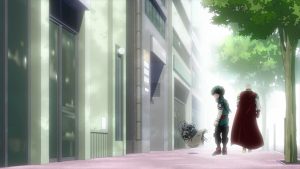 That said…  While it may be an oversimplification, their reactions also – to me – are exemplars of why All Might chose Deku over Mirio (who, to be fair, he’d yet to meet at the time) to succeed him.  If Nighteye was choosing his successor, Lemillion would be a perfect fit.  But is All Might a logical, “proper” sort of hero?  His greatest weapon has always been the visceral affection he inspires in people and his own enormous heart, and in truth he could never smilingly walk away from a child obviously terrified and pleading for help.  Of course it’s that quality that has him where he is now – which is an ominous thing to consider, to be sure… 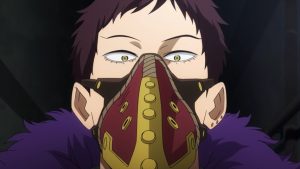 The way Horikoshi ties all this together is really rather beautiful, and once you consider the reason why Sir and All Might split up very poignant.  Nighteye’s caution is hard earned, and it’s his love for All Might that forced their separation – he’s gutted by what’s happened to his old master and by his own inability to prevent it.  Worse, he’s seen it – and where it eventually leads, which is to All Might’s demise.  And that “eventually” is not very far off, given that he used foresight and predicted All Might’s death in “six or seven years” almost six years earlier. 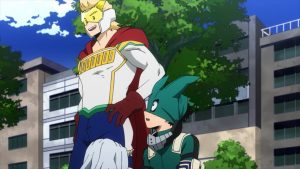 Perhaps it’s simply cruel fate that people like Toshinori and Izuku are destined to meet an early and tragic end, because they’re simply too concerned about others and not enough for themselves.  And that it’s this quality about them that makes them perfect carriers for One For All – indeed, it’s seeing so much of himself in Izuku that caused Toshinori to choose him as a successor.  For a man like him, knowing what that choice meant for a young boy’s future must have made it horribly painful.  He must have hated himself for it – and that’s not even considering the implications of Nighteye’s prophecy about him. 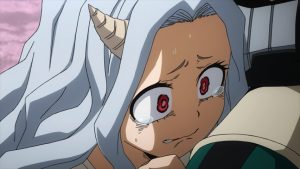 While they’re not biologically related, I can’t think of a better father-son relationship in hero fiction than All Might and Deku.  They’re both so kind, far too much for their own good, and that draws them closer together.  The purity of Deku’s emotions here – his desire to change All Might’s future – is truly heartbreaking.  But no more so than All Might saying that it was Deku coming into his life that give him a renewed desire to fight fate and live on.  But simply wanting it to happen isn’t changing anything.  Both of them are heroes in the best sense, better than their world deserves, but the world is cruel to heroes and loving another person isn’t enough to change their fate.  Boku no Hero Academia has never pulled its punches in the big emotional moments, and this one was certainly no exception.

The Movie – All the Anime