“Reviving Dragon Quest Builders Alephgard” [hereinafter “DQ Builders”] is a work of the genre “Block Make RPG” that makes things freely in the vast Alephgard world expressed in blocks and spins the story. Although the theme is manufacturing, there are plenty of RPG elements that are unique to the Dragon Quest series, so if you've ever played a series, you'll notice the elements you think "Oh!" 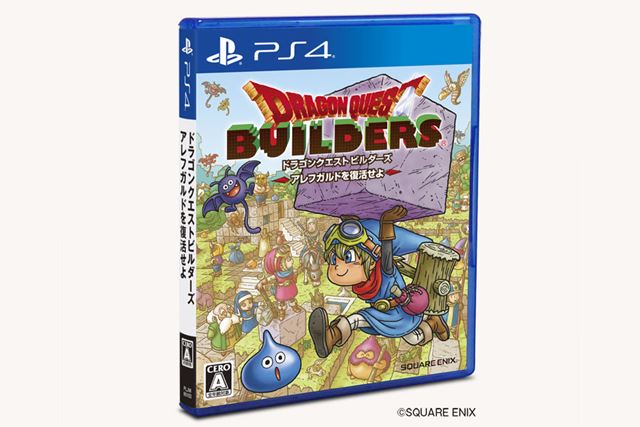 “Reviving Dragon Quest Builders Alleggard” released on PlayStation 4/3 and PS Vita is an adventure stage on the continent called Alephgard, which reproduces the world view of the first Dragon Quest series.

In the Dragon Quest, the world after the hero answered “Yes” to the question from the King of Darkness, “If you become a way of seeing, do half of the world”. There, the power of Ryu's demons covered the world of Alephgard, and humans were reducing their numbers every day. Melkidd, once known as a fortified city, is now invisible. Under such circumstances, a young man with a mysterious ability to make items and towns appears in this area. Youth, use that power to bring light back to all parts of Alefgard and defeat the Ryuo, the culprit that has put the world into darkness! 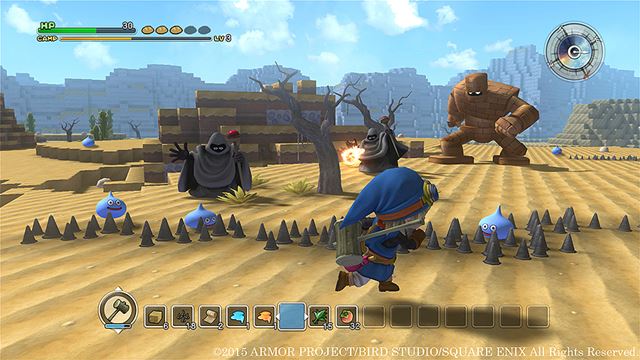 Monsters hang around the world, and people live with narrow shoulders. Let's save the world by bringing light back to the land of such Alephgard.

Two modes can be selected. It is up to the player to advance the story or make it freely!

This work includes a story mode in which the player becomes the main character and proceeds with the adventure, and a free build mode that allows you to make as much as you want on the “unknown island” that appears when you clear the first continent. In the story mode, we decided to visit the ruins of the fortress city Melkidd first. It's a place where you can feel the remnants of the scattered stone walls, although they are tattered. The player creates a town based here and expands the scope of action while expanding the scale. On the way, you may discover a dungeon-like side hole and encounter a monster. As you progress through the story, you will be able to use the door to travel, so let's leave for a new place!

The first purpose is the reconstruction of Melkid. If you go out of town one step, a monster will hang around. Make a base in a wasteland

What are the three elements necessary for the revival of Alephgarde?

The key to reviving a devastated world is three elements. The first is “gathering”. You can “gather” the material by crushing the materials and terrain needed to make things or by defeating monsters. The second is “create”. Some of the materials we have used can be used as they are, but it is possible to reinvent them into completely new items by adding “handsmanship”. And the third is “build”. “Build” the building using materials and items. However, it is difficult to build suddenly. Therefore, an item called “design drawing” is prepared in this work. Anyone can easily complete the target building by arranging the blocks as shown in the drawing. 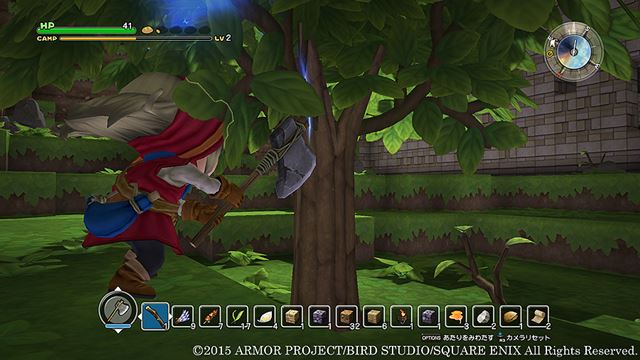 The material is rolling around the world. Go to various places and collect new materials 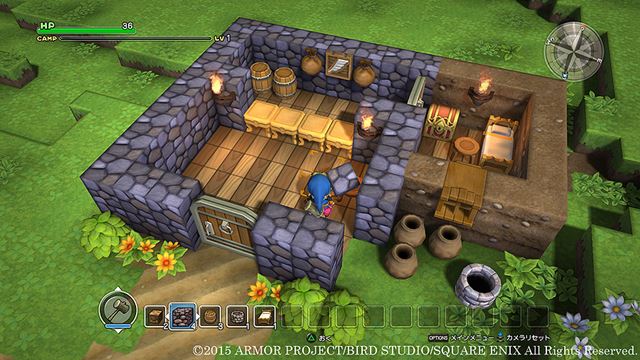 Now that you have all the materials, start building. If you don't know how to build, place the item with reference to the blueprint

If you develop the town, the range of activities will expand!

When a building made of blocks meets the requirements of a “building,” the main character gets experience. There are only three conditions: “two or more box enclosures”, “lights of torches,” and “doors”. However, if you stick to the interior, you can earn more experience.

When the experience level is accumulated and the CAMP gauge is full, the protagonist levels up and learns new recipes. In addition to that, the chance to learn recipes is when you hear from the people of the town or get specific materials. Exploring the world is the key to discovering new recipes. Items that you can learn by making recipes include storage boxes where you can store items, and familiar series signs. Once installed, you can enjoy adventures and town building even more. 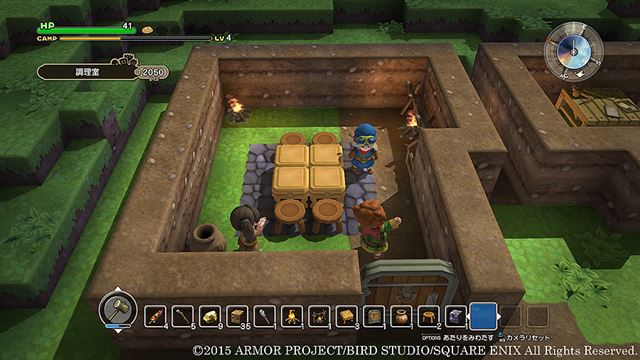 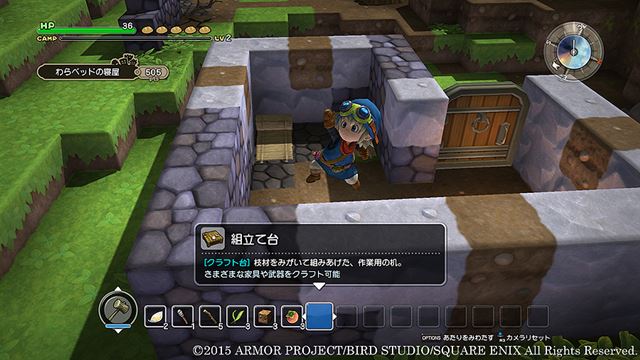 If you meet certain conditions, you may learn recipes. Try it right away and see how it works

What are the essential equipment for RPG and the huge boss that stands up?

In this world, you can collect materials with your own hands and create the familiar equipment of the series and the unique weapons of this work. What you need to do is a recipe for making equipment, but some of them can be learned by making requests from monsters, so you can't find them just by looking around.

Also, the special skills that the hero learns in the middle of the story can be useful not only for combat but also for collecting materials because the terrain can be broken at once. When you wear new weapons, new techniques, try them out.

There are four types of equipment: weapons, armor, shields, and accessories. Up to 5 weapons can be equipped, so you want to switch according to the situation

Harden yourself with equipment and repel the monsters that attack the town, and enter into battle with powerful enemies. The hero's first confrontation is Golem, the last barrier in the story of Melkid. In addition to setting up a dynamic attack that makes use of the giant, the rocks thrown will also damage the town. At first glance it seems that you can't beat it, but there are many traps that can help you. In addition to damaging, there are things that can break your posture, so attack when you're hooked on them! However, since the strategy is not only one way, it is also fun to find your own winning pattern. 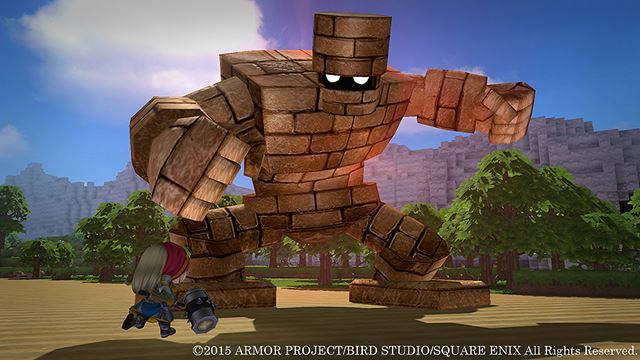 A huge golem stands in front of the hero. What kind of attack can you defeat without taking damage? The answer is not a whole 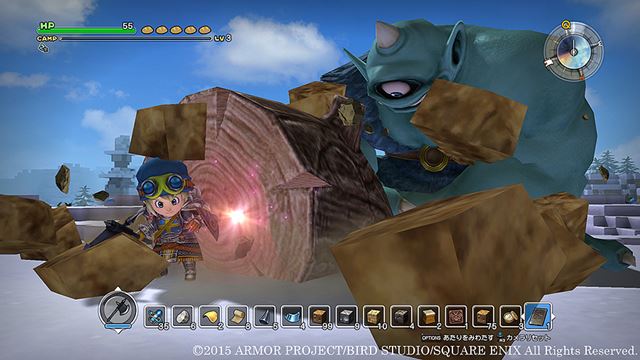 There are more powerful monsters in the world. You may be defeated if you try to fight, but since it is the Dragon Quest series, your efforts will surely be rewarded!

If you can help those who are in trouble, what can you do?

Because it is far away from the town, it is a place that would normally be overlooked … that is where unknown mysteries remain. It may not lead directly to the world's resurrection, but if you find someone in need, help them actively. If you can solve it successfully, you may get rewards and joy that are worth the effort. Perhaps there is a possibility of tremendous treasure get! 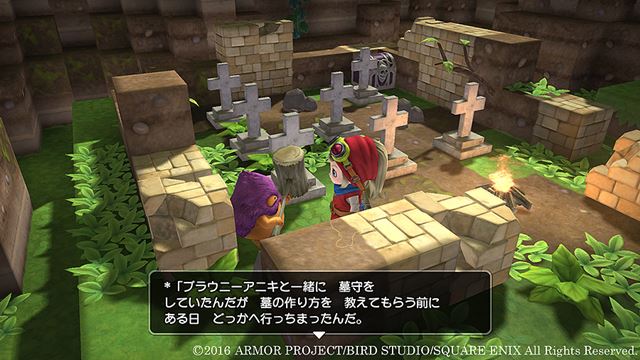 Apparently, if you clear this quest, you will get the treasure you can see in the back. Since valuables may be available, you can only help !?

In the other “Free Build Mode” recorded, an unknown island is set. This area is divided into three areas: the “Home Area”, which is the base for activities, the “Battle Island Area” where you can battle continuously with monsters, and the “Area where continental materials and monsters that have been cleared in Story Mode will appear”.

In the home area, you can apply the knowledge and techniques gained in the story mode and enjoy making things freely. There are plenty of materials, so you might be able to build a building you had imagined. You can also upload and download buildings using the network. Create a proud building and open it to the world!

Step into a cleared continental area and you can secure materials that are not available in your home area. The materials possessed by monsters are also available here.

In the Battle Island area, you can enjoy battles with monster corps using special tickets. The winning rewards are blueprints and recipes that are only available here. Of course, it is not difficult to imagine that the stronger the opponent, the better the rewards will be. If you are confident in the battle, try it.

In the home area, if you connect to a network, you can get in the way of a friend's building. If you look at the interiors of buildings made by other people, a new decoration method may appear. 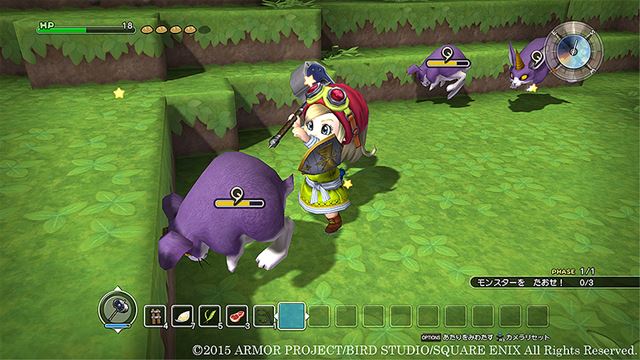 Battle Island area where you can have a hot battle with monsters. How far can you do against your opponents?

Although it is a trendy construction, it is a volumetric work that actively incorporates the character of the Dragon Quest series

World building is the current trend, and at first glance, it may feel just like a boom. However, if you know the contents of DQ Builders, it will be obvious that this is not the case. Not only building the world with blocks, but also flesh out the story like a Dragon Quest series, and if you play the series works, you will get familiar items and monsters, and sublimate it to a work that can be enjoyed by a wide range of ages It is. If you still do n’t know, you ’ll want to play with the free trial version. Unfortunately, you can't transfer saved data from the trial version to the full version, but you can feel the joy of DQ Builders.

In addition, as a first-time purchase privilege, a download code that can be obtained in advance for the Japanese-style set “Sakura no Ki / Goza Floor Block” is included. By using this, you can add a “Japanese” taste to the world of Alephgard, so you can enjoy cherry-blossom viewing, make a Japanese garden and match the cherry trees, and enjoy different DQ Builders. 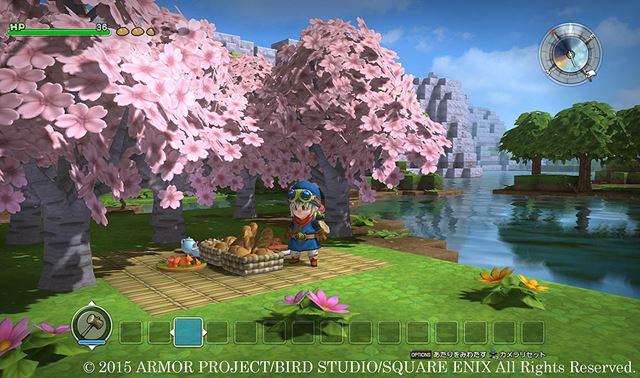 The inside of the screen is dyed in pink and it is a nice privilege to feel the arrival of spring as soon as possible.