Best performance on the market


Predator Helios 500 is one of the most high-performance gaming laptop models that Acer releases in 2021. The laptop line is a 17-inch type, equipped with the most configurable components in the price segment, combined with an efficient cooling system. In addition, the Helios 500 is sold at a more competitive price than some gaming laptops in the same segment, such as the MSI GE76 Raider and the Lenovo Legion 7i. 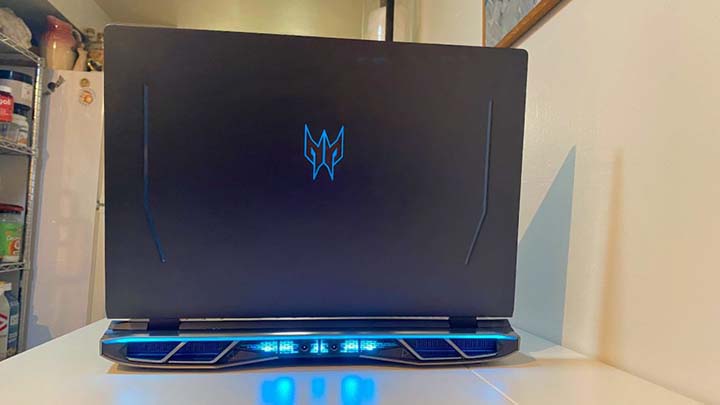 In terms of build quality, the 2021 Helios series has not changed much compared to previous generations, with a large and somewhat bulky body compared to today’s laptop standards. With an overall weight of up to 4 kg, the Helios 500 is not very portable.

However, when compared to previous generation models, the body area of ​​the Helios 500 has been slightly reduced by reducing the size of the bezel surrounding the screen. However, the Helios 500 is still one of the most bulky 17-inch laptops compared to the models of this generation.

That’s because the machine is equipped with a large-sized cooling system inside, designed to allow the i9 chip and the RTX 3080 graphics card to operate at the optimal level of performance. The Helios 500 is a laptop with a high build quality, with every detail tied together firmly and seamlessly.

Aesthetically, this version has a cleaner appearance than the Helios 500 series models previous generation. Specifically, the Predator branding of the series has been replaced with a logo with a more minimalist appearance. Even so, the Helios 500 is still a typical gaming laptop, and you can see that through the RGB lighting that illuminates the keyboard, as well as the decorative light strip on the front edge.

The machine is equipped with many connectors with diverse types, allowing users to use many different types of peripheral devices. Most of these ports are arranged along the left edge, leaving an open space on the right edge, allowing you to comfortably use the mouse during gaming.

The device is equipped with a total of 2 power ports on the back edge, 1 more port compared to the previous version. The Helios 500 is equipped with a variety of ports, including USB Type-A and Type-C ports with support for the Thunderbolt 4 connection standard, HDMI 2.1 port and Mini DP 1.4 port. The only shortcoming is the memory card reader slot and fingerprint security. 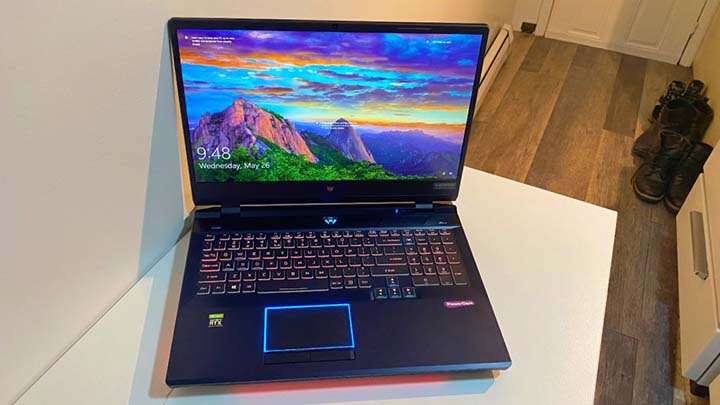 The Helios 500 keyboard has a standard layout with a full-size size, allowing users to quickly get used to it if you have ever laid your hands on other laptop keyboards on the market. Thanks to a large body, the buttons on the number pad and arrow keys are full-sized and are widely spaced apart.

The keyboard offers a moderate input experience, on par with other models in the same price segment. The buttons of the keyboard set have a deep travel and have a good bounce when pressed, not making a lot of noise during use.

To control the mouse pointer, Acer equips the laptop with a touchpad with dedicated function buttons. The touchpad of the device is decorated with an RGB light frame around, similar to the design in previous Helios 500 versions. The surface of the touchpad has a not too high level of finishing, making the mouse pointer control experience not very smooth. 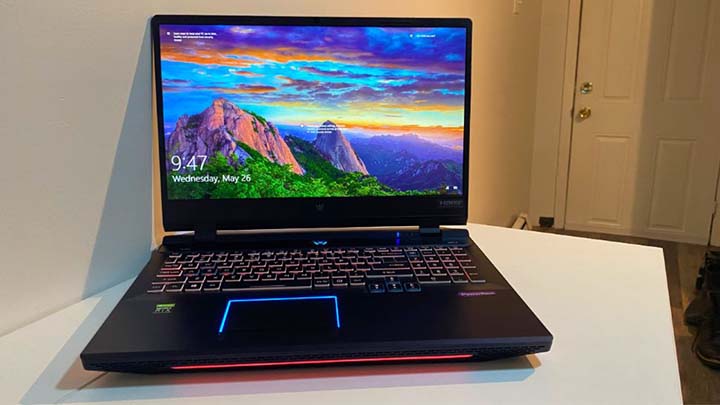 For the 2021 version, Acer released the Helios 500 series with a few different screen types, including FHD 360Hz, QHD 165Hz IPS and UHD 120Hz mini LED screens. The model we used in the review uses a 3rd monitor.

I have reviewed laptops using miniLED screens before, but the type of panels that Acer equips for the Helios 500 series has many differences. Specifically, the screen of the Helios 500 is not limited in its ability to display black and contrast when the brightness is increased.

The version of the machine we used in the review is a high-end configuration, with an Intel Core i9-11980HK chip, 32GB of RAM, 2TB of internal memory (2x Samsung PM9A1) and an Nvidia RTX 3080 graphics card. During actual use, the device delivers a strong level of performance in all aspects, providing a smooth experience when interacting with different applications as well as when playing games.

We’ll start with testing the performance of the chip by running 15 iterations of Cinebench R15, with about 1 to 2 seconds of delay between each iteration.

Helios’ i9-11900HK chip operates with a sustained power level of 103W when the laptop uses the Turbo setting, corresponding to a clock rate of over 4.2GHz. During this test, the chip has a temperature above 90 degrees Celsius, and has a performance result of over 2200 points.

Equipped with the powerful RTX 3080 series of graphics cards, the Helios 500 can easily play many different games on the market with ease.

The battery of the Helios 500 is a 74Wh type, smaller than the batteries of a few other laptops in the 17-inch segment on the market. This is understandable because part of the space on the inside is taken up by the 2.5-inch memory drive.

Similar to most other gaming laptops on the market, especially those in the 17-inch segment, the battery life of the Helios 500 is just average. During our testing, the device only lasted about 3 hours and 12 minutes after surfing the web continuously using wifi network, with screen brightness set at 150 nit. 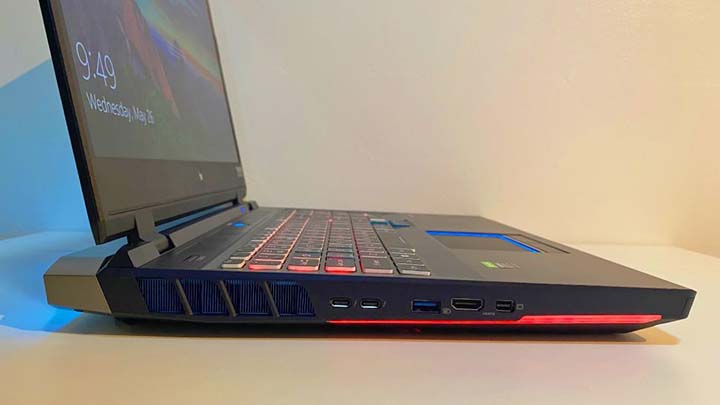 Overall, the Predator Helios 500 is an impressive gaming laptop, especially in terms of performance. Equipped with a speedy i9 chip along with a powerful RTX 3080 graphics card, the machine has the best performance in the price segment, allowing users to play well with many different games on the market.