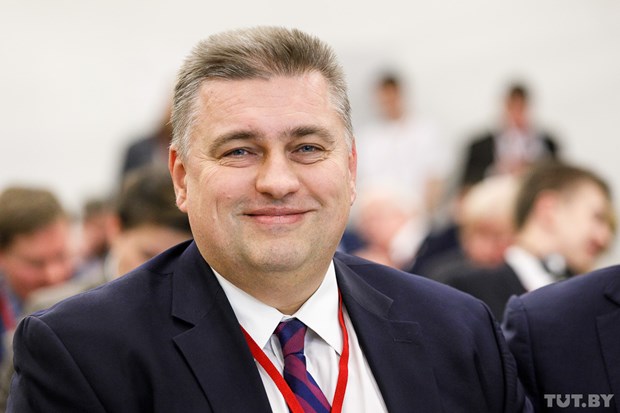 New Ambassador Belarus in the US Oleg Kravchenko. (Photo: TUT)

Speaking after being appointed, the new Ambassador Kravchenko emphasized that despite the differences in political-military institutions, Belarus and the US have the potential to become important partners of each other.

Mr. Kravchenko emphasized a key point in the bilateral relationship, which is the dialogue on issues with different points of view.

According to Mr. Kravchenko, the two sides shared common interests in the fields of finance, economic and energy dialogue, international security, cooperation between law enforcement agencies.

New Ambassador Kravchenko affirmed that the two countries would like to maintain normalization of relations at a stable level.

New Ambassador Kravchenko is a diplomatic official who spent a lot of time working in the US. In 2007 and 2008, he was Counselor at the Belarusian Embassy in the United States.

The position of Belarus Ambassador to the US has been vacant for the past 12 years after the scandal diplomatic In 2008, the two sides withdrew their ambassador to the country and kept the embassy staff to a minimum.

The bilateral relationship has warmed after the 2015 Belarus presidential election and the two sides announced an ambassador exchange this year.

According to sources, Deputy Assistant Secretary of State for European and Eurasian affairs Julie Fisher could be a candidate for US Ambassador to Belarus.

Previously, this diplomat was a deputy of Washington at the North Atlantic Treaty Organization (NATO). She has also worked at US embassies in Georgia, Ukraine and Russia./.

Post Views: 65 The attack took place in the afternoon of February 18 when the vessel was docked at the quayside in Tripoli, an area currently controlled by Turkey’s backed National Libyan Government (GNA) forces. LNA Brigadier General Khaled Al Mahjoub told Al-Arabiya that, at the time of the attack, the Turkish ship had just […]

Post Views: 11 Share FB Share Twitter Comment On October 15, from shops, offices and schools, tens of thousands of Thais poured into the streets of Bangkok, expressing anger and defying the government. Embed from Getty Images Crowds gathered at Ratchaprasong, one of Bangkok’s busiest intersections, on the afternoon of October 15 and shouted: “I […]

Europe had its first death because of Covid-19 | World

Post Views: 36 According to French Health Minister Agnes Buzin, the tourist was from Hubei province of China and entered France on January 16. He was taken to Bichat Hospital, and strictly isolated until January 25. The condition of older travelers deteriorates quickly. Not long after that, he was in critical condition, and needed special […]