Beastars is a brainworm of the highest order. Every time I watch an episode I just can’t stop thinking about it.  I had some forewarning that this series was going to be special – I mean, I ranked it as my #4 expectations series of a fairly deep season based almost entirely on the manga’s reputation.  But even in a case such as that it still feels surprising when it actually turns out that way, as opposed to an adaptation of a manga you love where you expect it in a much more visceral sense. 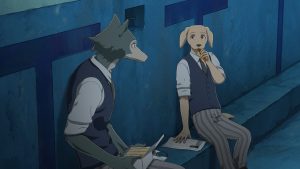 When I think that two of my top series of the fall are full CGI productions, it feels sort of insidious in a way.  I’m a stalwart of traditional animation to a fault, and anime is really one of its last strongholds – it does concern me when CGI starts to feel “normal” to me.  But Hi Score Girl certainly has valid reasons for it as a stylistic choice, and the fact is that what Orange is doing with Beastars is really making the technology look as successful as anything in anime has.  It’s a stylistic choice here too, albeit to a lesser extent – I’ve noted the slight wrongness that 3-D animation imparts to character drama, even when it’s this slick – and that wrongness has the right feel for this material. 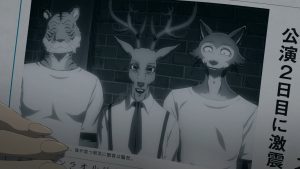 I also want to note that Senbongi Sayaka is a damned fine seiyuu, and one that doesn’t as much acclaim as she should.  This episode was really her showcase as Haru, and she knocks it out of the park.  Her young career is full of sneaky good performances like Chitose in Girlish Number and Mayuko in Just Because, and she has a lot asked of her as Haru.  She has to come off as both smart and a little naive, kind-hearted yet utterly cynical, and here as a girl who’s simultaneously intrigued by and afraid of the boy who’s clearly fascinated by her.  The scene where Haru and Legosi share an awkward yet charming dinner is one of my favorite Beastars sequences yet, and that’s a list that’s growing steadily. 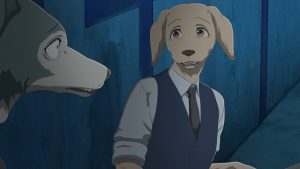 The difficulty for me with Beastars, honestly, is that despite all the contemplation is prompts I find it very hard to organize my thoughts about it.  It’s a story that’s operating on multiple levels at once, and when events like this week’s play out, one has to see them both in the literal and symbolic sense. There’s a definitely theme of being true to oneself playing out here, most obviously through Legosi.  No one should be forced to live with low self-esteem or suppress who they really are, and I think it’s very telling that he admits to feeling good about finally having let his inner self express himself.  “I do like it… which I don’t like” is such a classically “thoughtful introvert” thing to say – and that’s who Legosi is. 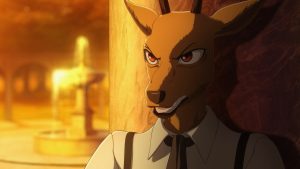 Of course, what else Legosi is, is a wolf.  And a wolf is a creature who hunts and kills to live.  If a wolf is going to live with conviction (and that’s the buzzword in this episode) that would seem to be a prerequisite.  It’s great that Jack accepts him for who he is, and it would be great if Legosi could accept himself.  But again, on what level do we take what we’re watching?  Legosi is in a love with a rabbit, and wolves eat rabbits.  They don’t do it because they hate them, or because they’re evil – they do it because that’s what wolves do.  And the fact is, among the many boys this rabbit is intimate with is Louis – who while much bigger and more formidable than a rabbit, is still prey.  Where does this take his relationship with Legosi when he finds out? 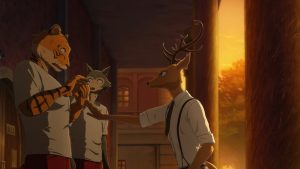 Haru is no less fascinating a case, a girl living a self-destructive and lonely existence but one she’s seemingly much more at peace with than Legosi was.  What caused Haru to give up on herself, I wonder – to value herself so cheaply?  She’s smart, she’s adorable (well, it’s true), and a compassionate creature.  There’s something genuinely heartwarming about her interactions with Legosi here – he sees her differently than any of the boys she sleeps with, and (although she initially forget they didn’t actually do anything – she says) she knows that.  But – she’s a rabbit and he’s a wolf.  Just for starters, there’s the thing she thanked Legosi for (which was both hilarious and creepy) and the incongruities just build from there. 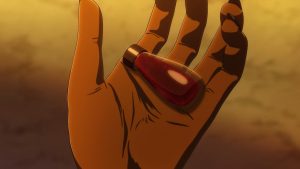 It’s quite vexing, this whole premise, and I think the ambiguity of intentions is quite deliberate on the mangaka’s part.  If these were human beings we’d feel free to be charmed by their beauty and the beast chemistry – two lonely souls finding each other.  Haru using Legosi’s pack as a booster seat (kicking her legs like a little girl as she chomps her carrots), Legosi gallantly bending to fix her shoe, causing their eyes to meet for the first time – it’s wonderful to watch, truly.  But when the beast literally is a beast, the dynamic is totally different, and it even makes one wonder what comment (if any) Itagaki-sensei is implying with that fact.  Beastars a fascinating and difficult puzzle, but I wouldn’t want it any other way.