If you are a fan of science fiction movies, you should not ignore it Battle Divas: Slay Mecha. The plot of the game takes place in the future of the human world, when the earth becomes polluted by nuclear weapons, at which time Nasa forces everyone to move to live in the giant space station named Icarus VI.

Decades later, the first group of students from the Icarus VI Academy of Heroes was sent back to Earth to perform an important mission. However, when they reached their destination, the earth had turned into a home to unimaginable monstrosities.

Starting a war that is not expected, you can play as one of the members of that expedition with the help of advanced weapons to destroy monstrous creatures living on earth. 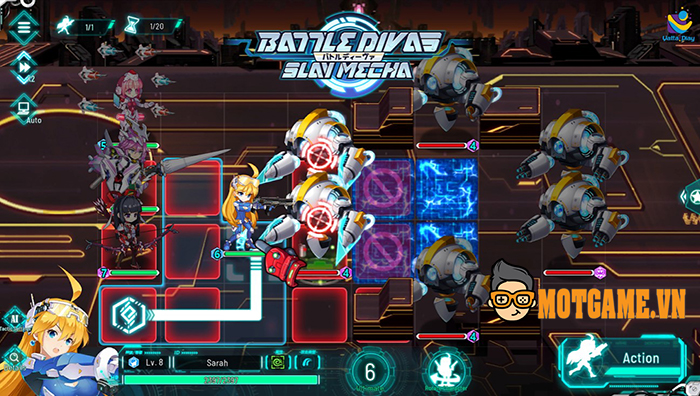 Battle Divas: Slay Mecha Mobile still follows the familiar gameplay of strategy games, which is collecting general cards, arranging the team according to the box, and fighting in turns.

Champion acquisition is performed sequentially according to the set game progress. Players need to focus on upgrading equipment such as guns, swords … by collecting experience points.

You can completely collect experience points through multiplayer missions and then unlock new skills and use them to complete the tough single-campaign levels.

The tough lines to exude a strong aura of the character are mixed with soft curves to add a lovely part.

Plus vivid fighting effects combined on the familiar sound background, reminiscent of a time-old memory of the game that has dominated the 8x, 9x generation that is the legendary handheld game Contra.

New combat mechanism: Still a familiar form of turn-based combat, but the game Battle Divas: Slay Mecha has its own unique new mechanics. For example, the skill when placed in certain positions, when moving there automatically the character is activated internally.

You can attack a part of the boss’s body to disable some of the skills it possesses … But this game does not have a rich main hero base like other games that compensate for the skill and system. The equipment system for the character is designed quite meticulously. The gameplay is heavily tactical: Players are involved in many different types of battlefields, with each type of battlefield will own different terrain, sometimes in the tunnel of electrical wires, sometimes on the street with long sliding cracks … all recreate the true scene of a dead planet.

Accordingly, it forces players to have flexibility in the way of fighting, move and arrange the formation so that it is reasonable, avoiding the disadvantages brought by the terrain. Unlike some other games, here players are allowed to move their generals in turn so that players not only arrange the initial team position, but also have to weigh and measure each step, so that they can lower defeat enemy champions quickly, limiting damage brought. Extensive equipment with 400 different types: One of the plus points of this game is the system of items and equipment accompanying super rich. Including items dedicated to heroes and set of items to increase strength are also collected during conquering daily quests.

To be able to decide to win or lose depends largely on the ability of the player to control the resources. So, Battle Divas: Slay Mecha is considered a strategy game that is easy to play but not easy to win.

In addition, the game also offers an extremely attractive experience and attracts players. Players can choose from many different activities such as PVP battle arena, infinity battle …

Each character in the game has different strengths and weaknesses, so it requires players to calculate strategies as well as have a good way of managing and moving to be able to control the game.

When playing this game, you will experience fierce battles with all the advanced weapons that the science fiction strategy game series can bring.