Although in its policy, Google prohibits binary options advertising, but in recent days, YouTube has frequently appeared images of Binomo.

The advertisements about Binomo have previously appeared quite a lot on Google and Youtube, but in recent times the frequency has been increasing. Appeared in Binomo's ad is a character named Quan with an attractive offer: ‘Hello, I know you. A year ago I was like you. Working 8 hours a day in a stuffy room. And I know the ads you're watching. That is the decision to change my life. '. After that, this guy drew the prospect of buying iPhone X, making money easily without having to go anywhere, with the money that he never dared to dream of. In conclusion, this ad advised viewers to make ‘wise decisions’ and choose to play Binomo application.

In fact, Binomo or many other ways to make money online like Binary.com, Olymp Trade. IP Options are binary options (binary options, binary trading / Binary Options). This is a financial tool with how to invest in predicting an increase / decrease trend of an asset for a certain period of time (usually very short time). Asset types predicted trends in these applications are usually gold, stocks, foreign exchange, money numbers …

Joining Binomo, after installing the application, users will be given a demo account with 1,000 USD in it to bet on the up and down of the property. After this step, the application will continually urge users to recharge in order to play reality.

In actual play, users will use the amount they deposit to bet on the up-and-down of the market's asset value. For example, the player who bet 10 USD for gold price to rise in 5 minutes. After that time, if the price of gold goes up, the player who has the bonus will still lose money.

According to many experts, determining the market in minutes is impossible. Random up and down fluctuations and binary trading in a short time frame are no different from gambling. There are even doubts that the up-and-down properties of pre-programmed properties are in the best interest of the application.

Participants in Binomo will have to invest a lot of time and effort to monitor the up and down situation of the property. They have to spend a long time researching to predict the trend.

Google has banned but ads still appear on YouTube

In fact, to be able to make money in this form requires players to have very in-depth knowledge of the finances or the type of property they bet. However, with popular advertisements such as: after 1 month to earn 1000 USD, it is very attractive to common investors. This makes them predict whether the up and down trend of the asset is largely from personal inspiration and whether or not it earns money depends on luck.

Binary options are a new form of money making, policies are still unclear, incomplete and it is difficult for any organization to control it immediately. Currently, there are many countries and organizations around the world that have banned a binary trading model with ordinary customers.

At the same time, European stock and market authorities (ESMA) have banned all forms of binary trading across European territory. In Vietnam, there are currently two banks, VIB and PVCombank, informing customers about not accepting virtual money-related transactions via the system, including payment, withdrawal, transfer, and card transactions for purposes. directly or indirectly buy, sell Bitcoin currency, Ethereum … with objects, virtual money trading floors like Remitano, Binomo. 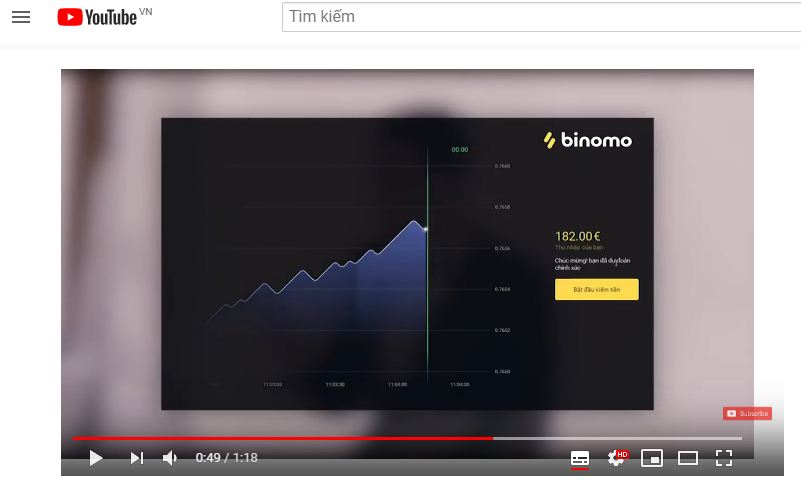 Despite the ban, Youtube still has an advertisement for Binary Options

The most remarkable thing here is that even though Google has banned the promotion of binary options, they actually appear on YouTube. In Google's policy on advertising products and financial services there is a paragraph: 'Since binary options transactions are in danger of causing significant financial losses, we do not permit the advertisement of the following: Advertising for binary options or similar financial products' . Thus, although there was a policy to ban binary options advertising, Google still advertised these forms of money making on Youtube.

Joining Binomo is advertised to make money very easy, high-income and effortless. This application also uses phrases such as' investors', traders' … to promote this form with ordinary users. However, in fact, the binary option is not an investment. Because investment is a user spending money to buy – sell something for the purpose of generating profits and thereby earning income. As for binary options Binomo, users only spend money to bet without buying – selling something. In other words, this form of betting is quite similar to online gambling.