Synopsis Koyomi Araragi, a third-year high school student, has been a little different from other people since she was involved in a ridiculous “incident” during spring break.Quote-Wikipedia

The original is Nisio Isin’s light novel,
All 12 episodes were broadcast on TV, and then 13 to 15 episodes were distributed on the WEB.
Broadcast started in July 2009, and the final episode will be distributed in June 2010.
It took about a year.
Directed by Akiyuki Shinbo, produced by Shaft 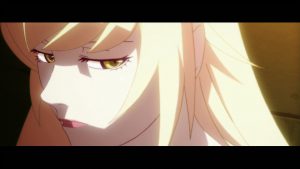 It is an on-parade of “meaningful” images from the beginning of episode 1.
A girl’s panchira, a woman lying down with blood, a man in an aloha shirt.
The hero’s “past” is depicted fragmentarily at the beginning of the first episode
Show the viewer that something was happening to the hero.

From there the girl falls from the sky. I’m just saying that it’s a solid development.
Like a boy working in a mine holding a girl falling from the sky
The main character of this work also accepts a girl who is as light as a feather.
The fallen girl, “Senjogahara Hitagi,” has nothing to call weight.

This work consists of “conversation”.
There are many stories by the hero as if he were reading the original book as it is
It is also a feature of this work. The hero who has a secret himself is not originally interested in others.
However, she is worried about her secret because she accepted “Senjogahara Hitagi”.

Why doesn’t she have “weight”? 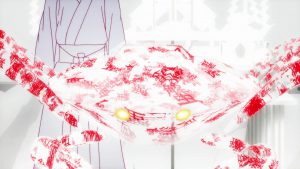 She encountered a “crab” and was deprived of its weight.
There is something called “mystery” in the world of this work.
It is sometimes born of human rumors and urban legends, and sometimes takes advantage of people’s weaknesses.
A girl named Senjogahara Hitagi was also attacked by “Funny Crab”.

A mystery is an existence that is born because there are humans.
In other words, it can be said that it is the result of some desire that human beings desire.
She was deprived of her weight because she wanted “something”.

She challenges the ritual to dispel the mystery. There is a reason why I was trapped in a mystery.
By imposing your own heavy thoughts on “Funny Crab”
She gained lightness in mind and body.
You have to face yourself to get rid of the mystery.

You can get rid of the mystery in yourself because you face yourself.
This work is a story of a girl and a boy trapped in such a “mystery”.
The girls are in captivity, on the cochlea, on the monkey, on the rope, on the cat.

There was something wrong with the mysterious girls,
I talk to them every time and repeat solving their worries and problems.
The story is patterned to some extent, but the attractive heroine is cute
A conversation drama with such a heroine becomes a habit. 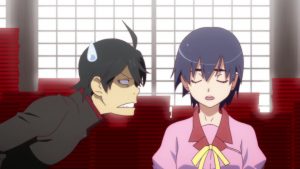 The character is saying the lines, but the face and mouth are not reflected
It’s an interesting drawing that can be seen as an animation, expressed by the movement of “ahoge”.
Characters, live-action, various “shaft” and “Shinbo director” -like production
Although it is a part where people have different tastes,
Such a production with different tastes creates the world view of the work “Bakemonogatari”.

The voice actors who play the characters are all talented.
There are many long lines, many lines, and many emotional lines.
That is why Hiroshi Kamiya, Chiwa Saito, Yui Horie, Takahiro Sakurai, Emiri Kato,
With Miyuki Sawashiro, Kana Hanazawa, Eri Kitamura, Yuka Iguchi
Those who can act properly strengthen the charm of the character by playing the character.

It has a strong personality as a character, and such a character is in omnibus format.
It’s because I draw two or three episodes one by one
The impression of each person deepens firmly. 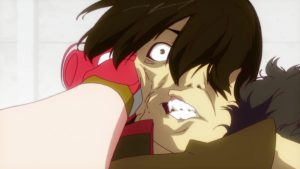 The main character, Koyomi Araragi, has the power of a vampire.
Therefore, it also has the ability to regenerate close to immortality, and sometimes fights mysteries.
The battle scene where you fight without worrying about your own body is the height of grotesque,
I broke my bones, easily punctured my body, and blood blew out (laughs)

The battle scene that can be said to be messed up because it has healing ability
It deploys speedily, moves rapidly, and causes damage to the human body.
The vivid battle scene makes you feel the thrilling charm.

It is a depiction of relentless damage to the human body because he has therapeutic ability. 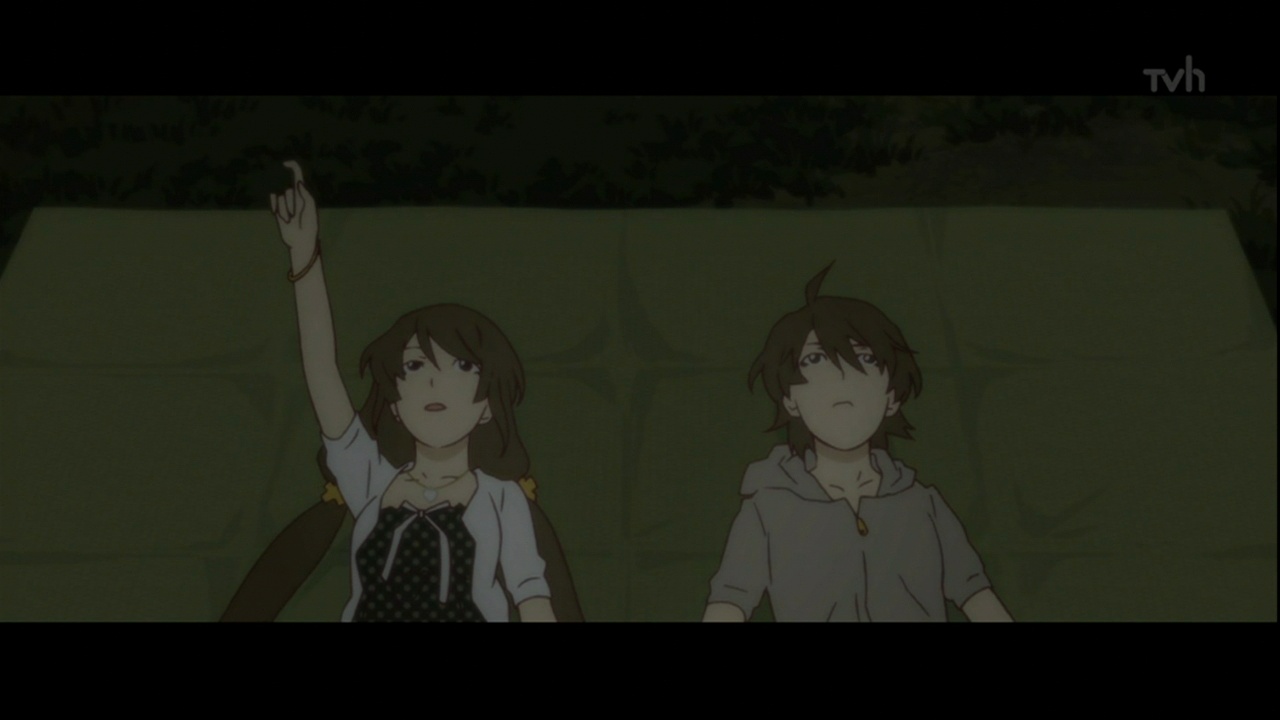 “Senjogahara Hitagi”, who becomes a lover in the early stages with the main character, is a tsundere-like character.
In the past, I was scared of being a man and didn’t go well with my mother. My father is all about work.
He closed his heart and was trapped in a mystery.

For her, “Koyomi Araragi” is like a prince who saved herself.
The clumsy Senjogahara Hitagi clumsyly conveys his thoughts to him and becomes lovers.
The appearance of trying to do “lover-like” things in clumsy communication
Really, really cute.

His first date with her involuntarily stimulates the lacrimal glands.
She hits him with everything she has.
Show yourself all by exposing everything that is given to him within you.
I am afraid to lose a human named “Koyomi Araragi” because of the trauma of the past.
Such fear creates anxiety, but Koyomi Araragi grabs her hand.

The sweet and sour youth romance pattern is indispensable for this work.
There is also a story of the heroine’s love over the main character, Koyomi Araragi. 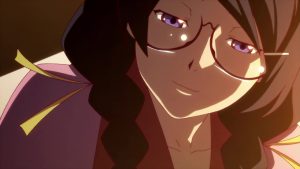 If you agitate your love, it becomes a weakness and a mystery.
I fell in love with “Koyomi Araragi”, but it didn’t come true.
The desire to like him, the despair that I can’t understand, the craving to take away
Disappointment that you can’t take it.

He chose Senjogahara Hitagi over Hanekawa Tsubasa. He doesn’t shake.
Although there are many attractive heroines, the main character of this work does not choose Harlem,
I’m choosing only one woman without doing anything.

Exhales love with nowhere to go in a mysterious form.
Why don’t you notice my love and why don’t you respond to my love?
If you can’t capture your heart, kill it if you can’t get it.
But you can’t kill it. I’ve fallen in love with it once.

One cool where the story of each girl is drawn
It is a work that makes you feel the satisfaction of seeing one work. 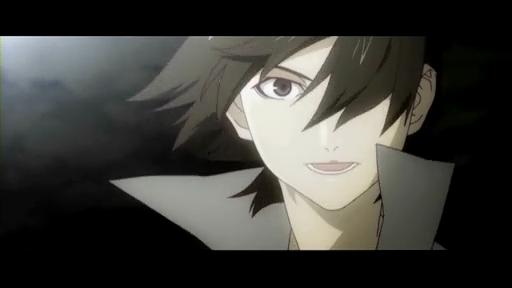 Overall, this work is a work with full habit.
Many of the productions to liven up the conversation drama because it is director Shinbo of Shaft
Shinbo’s character is fully open, and some people are not good at it.
However, it is the “Bakemonogatari” that only matches this production.

Although the story is strange,
It’s a story in which each person faces the inside.
By facing yourself and your existence properly with your worries
The mystery moves away from them.

Each story symbolizes each character,
The impression of each character remains firmly.
There are many cute characters, but they are not harems.
The main character chooses only one woman.

It’s a work with many suspense and fantasy elements,
This work is an unmistakable youth story.
Adolescent boys and girls confront their families, themselves, and their future in love.
That is why I feel the love of each character.

It is the origin of the Kamonogatari series,
As long as you “get rid of” this work, you should be able to enjoy the series after that. 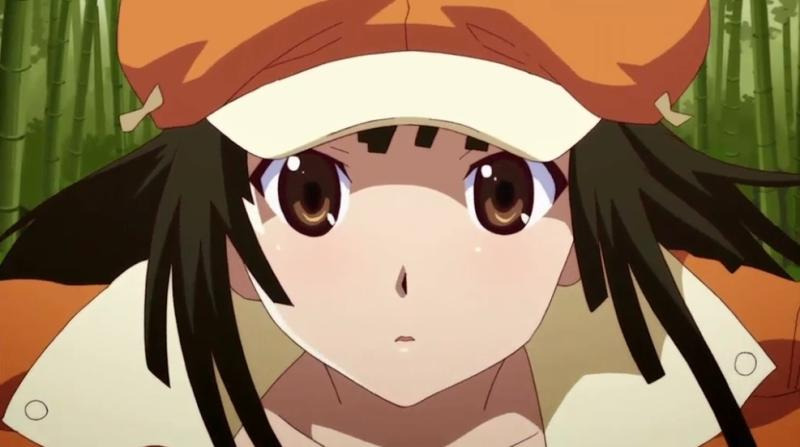 It was the first work in about 10 years, but I enjoyed watching it.
The cuteness of the character that does not fade, the story, the fun of the production,
The work called Bakemonogatari, which is full of Shaft and Shinbo’s uniqueness
It’s definitely interesting even after 10 years.

Many of them haven’t seen the following series, so
I would like to take this opportunity to see it.