Cheap Nokia Smarpthone 2 was released by HMD Global in October 2017 with Android 7.1.1 Nougat, then was "life" Android 8.1 Oreo in March this year. And it turned out to be the last major operating system update of this phone.

According to the GSM Arena site, the Nokia 2 has been released with a two-year promise to update the version. So these phone owners are looking forward to experiencing Google's latest Android 9 Pie operating system at the moment.

Earlier, HMD Global customer support also confirmed that the Android Pie update will eventually come to Nokia 2, but does not share any time frames for the release.

However, in the latest news, a Nokia community administrator has now confirmed that Nokia's customer support has made some mistakes and Nokia 2 will not receive the Android Pie update. You can see this in the image below. 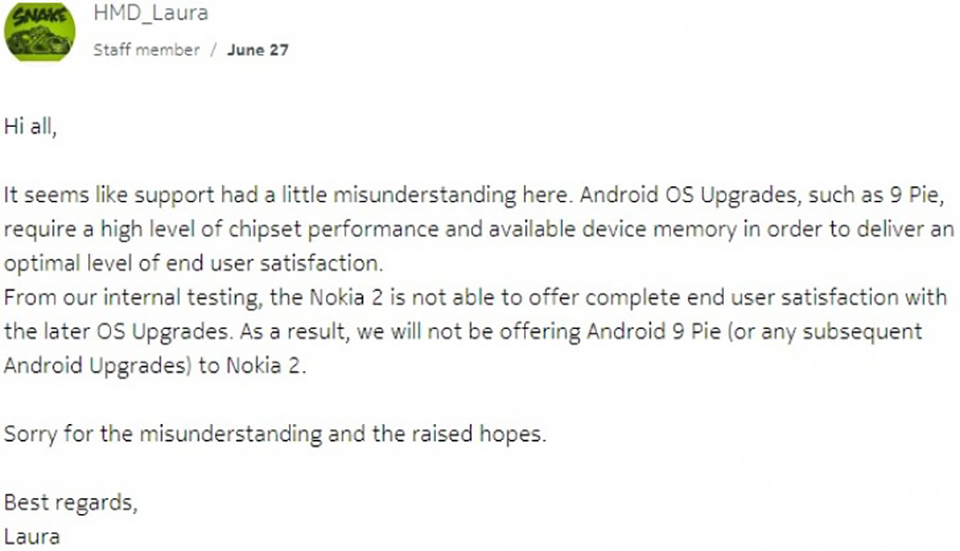 Some people hope that HMD can still release Android Pie (Go Version) for Nokia 2, which needs less resources, but before that the company made it clear that this phone cannot be transferred to Android program. Go because it was not released on it.

Thus, Nokia 2 will not receive any major operating system updates, but we may see HMD continue to release security patches for this smartphone in the near future.