While the number of Mobile World phone stores continued to be cut, Bach Hoa Xanh still led the system in terms of speed of opening new stores with 43 selling points opened in April.

At the end of the first 4 months, Bach Hoa Xanh had 512 stores in Ho Chi Minh City and the East and Southwest provinces. Of these, 63 shops have an area larger than 300 m2, accounting for 12% of the total number of points of sale.

Compared to the other two retail chains, the system is Green Electronics and Mobile World MWG + 0.11%, Bach Hoa Xanh had the most impressive growth in the past month with 43 newly opened stores. Meanwhile, Dien May Xanh opened 17 more stores and Mobile World even closed 2 selling points.

Especially, among 512 stores, Bach Hoa Xanh has 141 stores in the western and southeastern provinces, increasing by 46 selling points. Thus, after only one month, the number of stores in this chain in provinces outside HCMC has increased by nearly 50%.

Across the system, the average revenue of each Bach Hoa Xanh shop operates before about VND1.3 billion / month.

In terms of product structure, the contribution of fresh, cool and frozen products in Bach Hoa Xanh's total revenue accumulated in the first 4 months continued to increase to 47%, higher than 40% of the same period last year. .

Along with that, Bach Hoa Xanh also increased the import of foreign fruits directly. Mobile World Mini supermarket chain recorded a record growth of 300%, from 10 containers in March to 30 containers of foreign fruits consumed in April. Some major foreign fruit import markets of the chain This includes the US, Europe, Australia, New Zealand, South Africa, Egypt and Thailand.

Regarding the plan in the coming time, Bach Hoa Xanh said that it is trying to negotiate with other fast-moving consumer goods suppliers to increase gross profit margin to 1-1.5% by the end of 2019 at the latest.

Regarding the general business results of all 3 Bach Hoa Xanh, Dien May Xanh and Mobile World, the group of Mr. Nguyen Duc Tai recognized the total consolidated net revenue reached VND 34,122 billion, after-tax profit of VND 1,424 billion 4 the first month of the year.

Thus, the entire Mobile World chain has completed 31% of revenue plan and 40% of profit after tax plan for 2019. 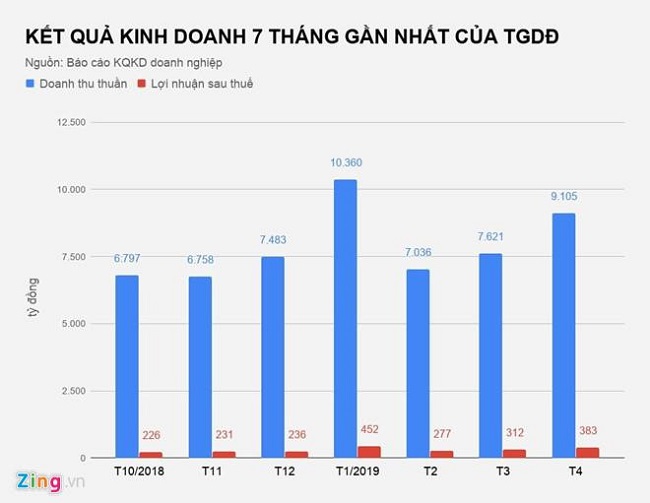