This is the true end of Baccano as anime, though I’m still not sure why.  With as popular as the franchise (including the anime) has been and as much unadapted material as there is, it’s always surprised me that Baccano never got a second season.  As I understand it the events of these three DVD-only episodes are a mixed bag of several different novel volumes, patched together to provide a somewhat linear narrative structure.  As such, the bulk of them are set just after the end of the Flying Pussyfoot incident. 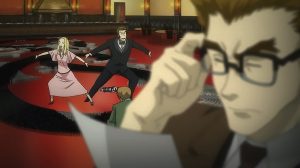 It’s notable that there isn’t nearly as much time-jumping in these eps as in the TV episodes – just the odd flashback here and there.  One of those is our introduction to Graham Specter (Sugita Tomokazu at his most flamboyant).  When we meet him in the “present” he’s one of Ladd Russo’s lieutenants, but we get a peek at how they met.  Ladd was sent to “talk to” the auto factory where Graham was a mechanic, who’d done something to cross the Russo family.  Graham is thrilled to meet someone as crazy as he is, and an unlikely friendship is formed. 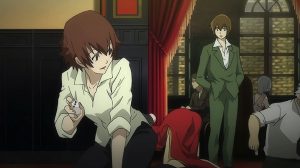 Graham is a real piece of work.  He’s certainly got plenty of bloodlust, but he’s not as abjectly lustful as Ladd.  He’s more of a philosopher, is Graham – he can take any situation and spin some mumbo-jumbo pseudo-philosophy about it and confuse the hell out of both his opponents and his own men.  He’s a natural pairing with Ladd – it takes a special sort of character not to overshadowed in that role – and it’s only fitting that he eventually face off with the other character who fits that bill, Claire Stanfield the Rail Tracer. 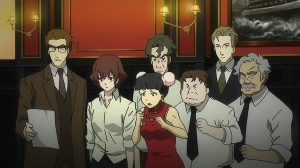 Another almost new face (we met him briefly on the Advena Avis) is Elmer C. Albatross (Oohata Shintarou).  He’s a cipher among the immortals, always urging everyone to smile and seemingly never directly involved in the plot.  He bribes himself into Huey Laforet’s jail cell for a chance to catch up, after having observed Maiza and Czes getting off the train in New York.  Novel readers could probably tell you Elmer’s importance in the larger story but to me he’s always just been an odd sort of accessory character, vaguely sinister despite (or perhaps because of) his incongruous relentless positivity. 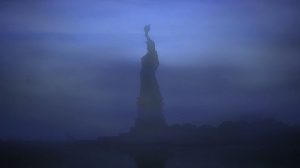 Speaking of odd accessory characters, I absolutely love the two kids who hang around with the Delinquents.  All they ever seemingly do is grin and say “Nya-ha!” to each other.  I have no idea what it means or why they say it, but somehow those two personify the irresistible randomness of Baccano.  The Delinquents are a major component of these episodes too – Jacuzzi (we get the heartwarming backstory of why he got his tattoo) is still laid up in after the Pussyfoot incident, and he very much takes Chane on-board as a spiritual member of the Delinquents.  Graham has heard that Jacuzzi’s gang is hanging out with Eve Genoard, and decides to kidnap her – though he very much gets the wrong end of the stick here (which seems to happen a lot). 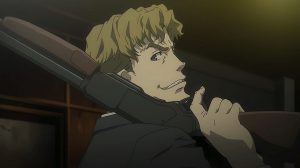 As for Czeslaw, after a momentary panic when he realizes Rachel has seen through his secret, he soon realizes that she represents no threat.  So he deigns to tell her the truth – or at least whatever portion of it he thinks is relevant.  Vino/Claire shows up, and that understandably throws Czes in a major way, but eventually he heads off into the sunset with Ennis.  It seems he has a more or less happy ending here (and it’s implied that Ennis is going to end up with Firo, who seems like one of the better-hearted characters in this bunch). 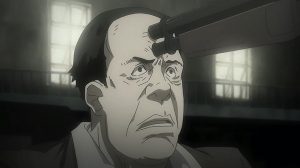 Almost everyone has some role to play in this finale.  The Devil himself is here, keeping an eye on Maiza as he promised Elmer he would. Sylvie (Takagaki Ayahi) shows up for the first time since the Advena Avis, having waited seven years to drink the potion and grown up in the process.  As for the whole subplot with Chane and Claire I find that rather weak by Baccano standards, as Claire is not someone I could ever develop sympathetic feelings for.  Dallas gets himself recovered from the Hudson, though it’s unclear whether Eve will be allowed to see him.  And the entire Martillo family enjoys a rousing domino knock-down, courtest of Issac and Miria. 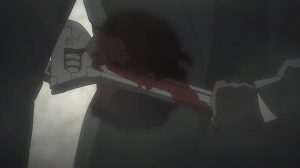 Fittingly, things close out with Gustav and Carol (them, and an immortal mouse), framing the events of the story just as they did at the beginning.  it’s a surprisingly effective conceit, and taking Baccano in as a whole it’s hard not to be struck by just how good it is – better than Durarara certainly, despite apparently coming up second best in popularity.  As we enjoy the best series of the moment, Great Pretender, Baccano seems like a fitting show to look back on – another anime that really embraced Western genre tropes and took care to get them right (albeit much more distinctly through a Japanese lens).  There are certain series where you just can’t help but bemoan the lack of a sequel, and Baccano is definitely one – but that’s not to say it didn’t to a magnificent job of telling its story in the time it had.