And again with the bombastic tonal shifts Baccano delivers with regularity.  Episode 8 could hardly be more the antithesis of the creepy, deadly serious Episode 7.  It’s pretty much all Isaac and Miria, and you know what that entails – they’re wonderful characters, but it’s the nature of these two that their presence effectively makes it impossible for a scene to be taken seriously.  They’re pure whimsy and absurdity, and that’s why their presence often comes in a more supporting role.  Here, they’re the main plot driver and the result is just what you’d expect. 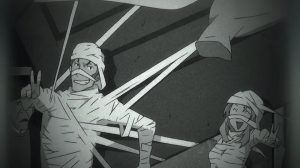 The remarkable thing about these two loveable idiots is that they managed to pull off enough cons successfully make the FBI show an interest. But then, this is not Jacuzzi’s 18 successful armed robberies of the Russo speakeasies in one day – pretty much all these Issac & Miria jobs were of the petty and silly variety.  That is, until they make off with the Genoard fortune – which they do in an attempt to cheer up Eve.  And in doing so, they do what they always do – make a friend for life.  Now of course Eve is a captive of the Runoratas (having already killed Eve’s father and brother), as always a victim of her brother’s transgressions – bait to try and lure Dallas out. 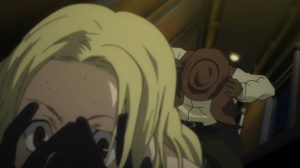 At that point it’s back to the blood and guts on-board the Flying Pussyfoot, mostly.  And in typical Baccano fashion, you have almost no one who’s on-screen in Episode 8 appearing in Episode 9.  That starts with the formal identification of Rachel, who’s an employee of the Daily Days and makes her reports to the mysterious president (he’s always behind a huge stack of papers and books, but it takes more than that to disguise the voice of Hayami Show).  As well, there’s Dune – one of Ladd’s boys, who runs severely afoul of the Rail Tracer, who turns out to be an ex-circus performer and current super-assassin named Claire Stanfield. 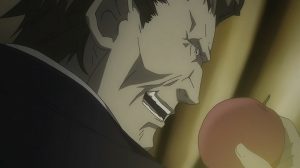 It’s astonishing how many plates Baccano can keep spinning and still remain engaging and (relatively) coherent.  That said, one of the reasons why Episode 7 works as well as it does is that it’s so linear, self-contained and easy to follow.  A very specific story in a very specific place, with a finite numbers of key players.  The rest of the time keeping track of the players without a scorecard can get pretty exhausting.  Even Claire has enough names for an entire cast list – Rail Tracer, Vino, and ***** (that’s for if we ever get a sequel), among others.

In addition to clarifying the matter of the Rail Tracer, this episode also reveals what’s happened to Dallas, more or less – he’s become an immortal pawn in Szilard’s hands.  Czes’ role is still less clear – we know he was on-board that sailing ship 220 years earlier when these events were set in motion, but what is his role in the present?  And why does he ask Ladd to do him a “favor” and kill everyone in the dining car?  Between Ladd’s white jackets, Huey’s black jackets, Jacuzzi’s Juveniles, wild card Claire and mysterious Czeslaw, there are so many conflicting interests on the Flying Pussyfoot that it’s a miracle anybody got off the train alive at all…