After so much speculation, today Asus ROG Phone 2 was officially launched and is the first Smartphone equipped with SnapDragon 855 Plus chip.

So after a year since Asus unveiled its first gaming phone, ROG Phone, today 22/7, the company officially introduced the successor version of Asus ROG Phone 2 with a lot of significant upgrades. price.

In 2018, it was the booming time of SmartPhone Gaming when there were a lot of different mobile phones with different styles being released continuously. Among the series of SmartPhone Gaming constantly appearing, ROG Phone was launched as a leap of gaming phones when it has a bold Gaming design along with a series of very good accessories. This year Asus ROG Phone 2 even goes further with the new kit with the latest SnapDragon 855 Plus Chip that makes this model comparable to those of handheld consoles like Nintendo Switch. Even this model has features that Console models can only dream of.

The first is the screen with a very powerful upgrade. The device is equipped with a 6.59 inch OLED screen with FullHD + resolution with a scanning frequency of up to 120Hz and an induction frequency of 240Hz. This is also an OLED display phone that supports the world's first 120Hz scan frequency. This screen also supports 10 bit HDR color resolution and integrates fingerprints in the screen.

Asus ROG Phone 2 is equipped with a screen with the most advanced technology today. This screen not only supports good game play with high frequency sweep and feedback frequency, but also provides very realistic colors with vivid color resolution to make the image stand out. The color standard on the machine reaches below 1 Delta E. The screen of Asus ROG Phone 2 is also longer than the predecessor model of 19.5: 9, along with 2 relatively thick screen edges on the bottom, making the overall machine part longer. The two upper and lower edges are where the Stereo speaker assembly is placed and essentially a gaming smartphone, so users will hold the device horizontally. At this time, the thick screen border has a lot more advantages. 2 speakers of the machine also support surround sound DTS: X Ultra helps simulate multi-channel sound (multi-channel) and has a volume larger than 2.5 times the predecessor ROG Phone model.

As a high-end SmartPhone Gaming today, Asus ROG Phone 2 is the most advanced model equipped with the current configuration. Specifically, the device is equipped with SnapDragon 855 Plus chip is an upgraded version compared to 855, the maximum RAM is up to 12GB along with 256Gb internal memory or 512GB with UFS 3 high speed standard. The internal battery has a capacity of 6000mAh and supports charging technology of QuickCharge 4+ with the highest input source reaching 30W.

To exchange a large battery with a spacious design for the new steam chamber heat dissipation technology, the weight of the device is up to 240g, which is very heavy compared to a current SmartPhone model. 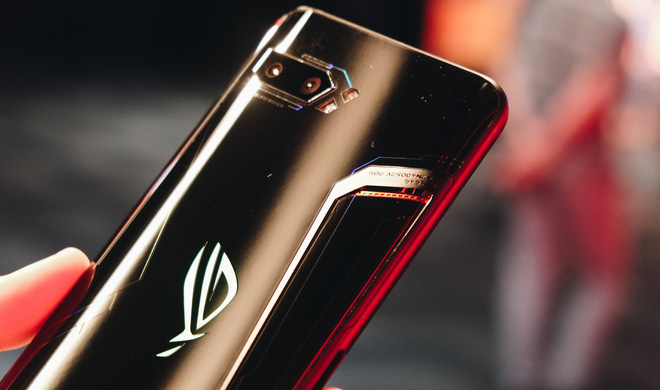 The device still holds a 3.5 mm headphone jack along with a separate connection port to attach additional fan accessories. The back of the machine is the ROG logo with RGB LED along with the eye-reflecting light lines are very eye-catching. With the fingerprint inserted into the screen, the back face is now more seamless when there is no longer a fingerprint sensor behind.

Inside the machine is a new air chamber radiator system that improves the gaming temperature for a long time. The device has two vibration systems located on the left and right side that help increase the gaming experience of the user.

It can be said that no phone company can make a medium and modern accessory that is very useful as Asus makes for its ROG Phone. This year the ROG Phone 2's accessories are even more and the remarkable special upgrade is ROG Kunai Gampad which is directly inspired by the Nintendo Switch with similar modes of play and disassembly. It also has a removable dock to connect to a removable screen and now you can connect the handle to turn your phone into a console running Android.

The interface of the device is pure Google like the Zenfone 6, however with the ROG Lightning Armor Case accessory, you can scan barcodes and install a completely new theme full of gamers.

There is also a prominent accessory that TwinView Dock II extends the screen of Asus ROG Phone 2 to another screen to display more information in the game. Currently there are quite a few games that support these two screens perfectly.

At the present time, the selling price of the product has not been announced yet. Representatives from Asus said that the company will start selling its ROG Phone 2 in September. Remember that September is the month of the launch of the new Galaxy Note model along with the new iPhone models and this is a unique time period. for the 2 models above. However, ROG Phone 2's customer segment is not the majority of users, so perhaps those who want to buy this device will not be too confused about other phones.