If you see a slim, lightweight, 360-degree foldable laptop like the real ASUS ROG Flow X13, you’ll probably think this is a thin and light laptop, not a gaming laptop, at least. until the dock is connected. Still, ASUS created this very unique and exotic product. Let’s find out about the ASUS ROG Flow X13 in this article.

The ROG Flow X13 itself is an excellent ultrabook

With that said, the appearance of the Flow X13 is easy to deceive people into thinking that this is a normal thin and light laptop. The machine is only 1.52 cm thick and weighs 1.3 kg. The design of the device is also very taciturn with a boxy, black design and only shows a subtle gaming look through the stylized textures on the surface of the case, the ROG logo and the keyboard’s unique font, not even the keyboard lights have RGB. 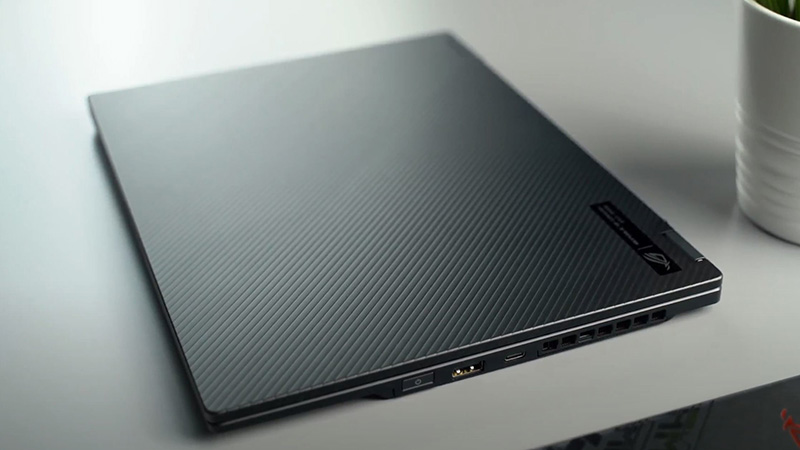 Other parts of the machine also achieve the quality of high-end ultrabook. The trackpad of the device is very quiet and accurate, and the keyboard has a deeper key travel than many current thin and light laptops. The power button of the device has built-in fingerprint unlock and the device has a webam, not cut off like many other ASUS gaming laptops. 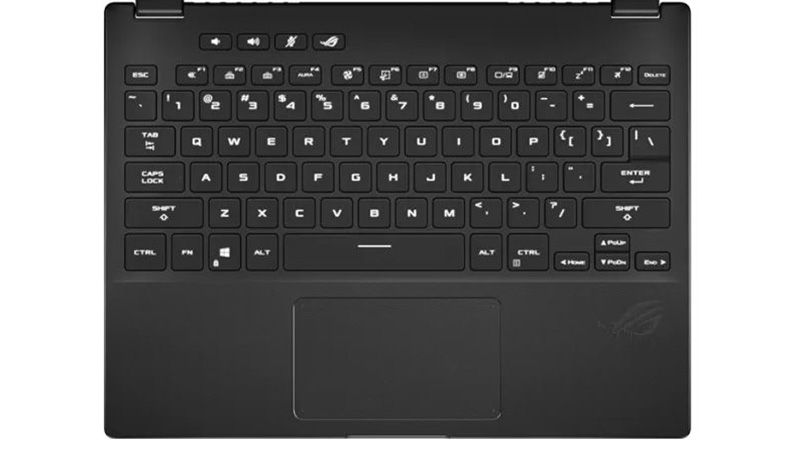 The keyboard of the ROG Flow X13 is very well done. Source: IGN.

Because it is a 2-in-1 laptop, the screen of the machine can be folded 360 degrees and supports both hand touch and stylus. The above features may seem strange when found on a laptop that is essentially a gaming, but still very handy and can help owners outside of gaming to do creative work.

The Flow X13 has a quality 13-inch panel with bright and beautiful colors. The screen of the machine has a 16:10 aspect ratio, which is somewhat higher than the traditional 16: 9 screen. The aspect ratio of the screen along with the resolution of Full HD (1,920 x 1,200) allows you to see more content on the screen. Unfortunately, gaming monitors in this price range do not support G-Sync technology. 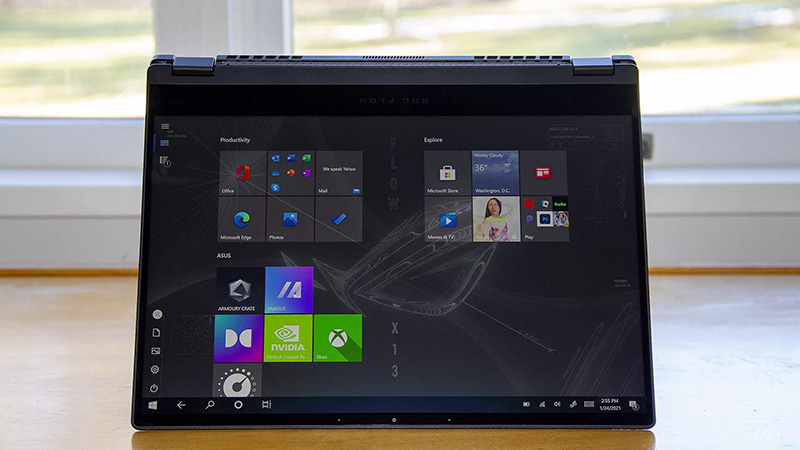 In short, when alone, the Flow X13 acts as a thin and light laptop and allows you to easily pack and move. If you are temporarily busy with work and unable to play games for a few days, you can temporarily forget the graphics card dock of the machine as ROG Flow X13 itself is still a great work laptop for you. .

If you really want to play configurable games, then it’s time to connect your machine to an external GPU. The XG Mobile graphics dock is the eGPU included with the ROG Flow X13. The Flow X13 itself is the only laptop up to now that supports this eGPU. In addition, ASUS still sells the duo together, but users cannot buy each item separately. 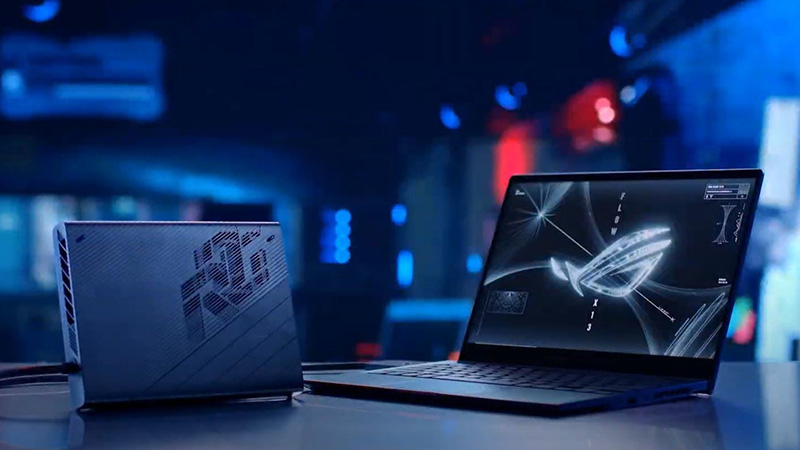 However, if you only buy the Flow X13 without the XG Mobile dock, then perhaps this is a serious omission. With NVIDIA’s latest and most powerful graphics card to date, the RTX 3080, XG Mobile will turn the Flow X13 into a powerful gaming laptop.

In addition, connecting to the dock also expands the system’s number of connection ports up to 4 USB ports, HDMI port, DisplayPort port allows you to connect to a separate display and an Ethernet port for the best Internet connection to play. game. In other words, the duo can connect to peripherals and become a gaming desktop right in your room. 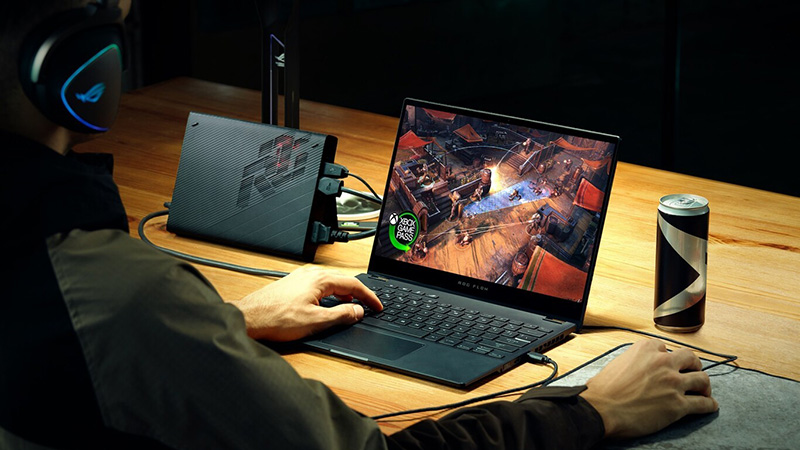 ROG Flow X13 can also be turned into a gaming console if you want. Source: Technidence.

The performance of ROG Flow X13 is outperforming

Because the Flow X13 can be considered as two separate gaming machines (when alone and when connected to XG Mobile), the performance test also divides the device in two states and compares it with two gaming models. Other high-end is the Acer Preditor Triton 500 and Razer Blade 15 Advanced. 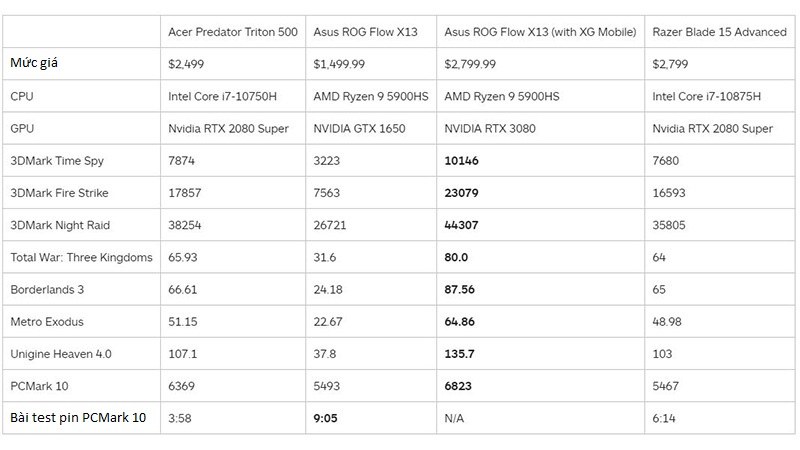 For now, we still haven’t had a chance to test machines with other RTX 3000 series graphics cards. However, the results still show that, when connected to XG Mobile, the Flow, with its thinness and lightness, can still crush the competition with the highest-end RTX 2080 Super graphics card of the previous generation. Obviously this is a gaming laptop of the best.

The above performance score is also proven in the game. When playing Battlefield V’s campaign, the device did not lag, easily achieved impressive fps figures and the 120 Hz screen of the machine also showed that smoothness. When disconnected from XG Mobile, you can still play light games with quite a respectable power from the discrete graphics card inside the machine, the GTX 1650. 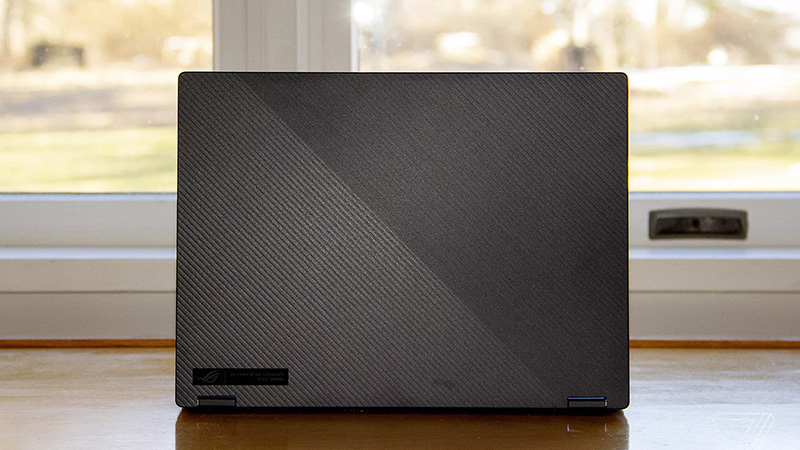 ROG Flow X13 itself also has quite respectable gaming performance. Source: The Verge.

Gaming laptops are never the right choice if you want to stay away from the power outlet all day long. However the Flow X13 is, as said, a great ultrabook and it can last up to 9 hours before needing a recharge. If you play the game continuously, the machine can last for about 2 hours. Not too bad, right? Another good point is that if you have a charger that supports USB Power Delivery, you can charge the device through the USB-C port too.

In addition, XG Mobile graphics dock will not work with the battery of the device. To get the graphics power of the RTX 3080, you need to connect it to a power source.

Because the Flow X13 has a thin and light design, the ability to heat up is also very high, especially when only the RTX 3080 graphics card is located outside the machine, while inside the machine still contains AMD Ryzen 9 5900HS CPU – a high performance chip. 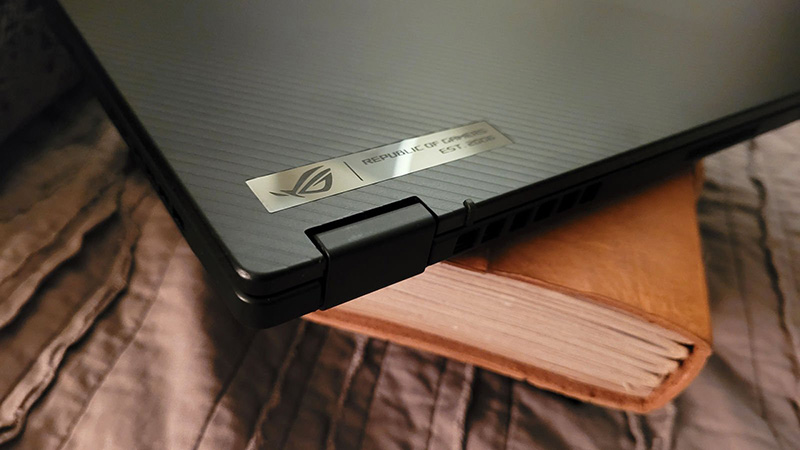 A gaming device as thin and light as the Flow X13 is also difficult to avoid high temperatures. Source: Gizmodo.

When gaming in a 23 degree Celsius room, the CPU can burn to 91 degrees Celsius, while the eGPU maxes out at 75 degrees C, as expected of a discrete GPU with its own heatsink. Because it does not contain both components that cause heat to the device, the high temperature of the CPU can still be said to be acceptable on the Flow X13.

It is hard to compare ROG Flow X13 with other gaming laptops because it is so special because of its versatility. However, it can be said that, with the price of 2,800 USD (equivalent to 64.4 million VND), you will own a high-end ultrabook and a quality gaming machine from ASUS.

What do you think about the ROG Flow X13? Please leave your comments below the comments.