Fonepad product line is being promoted by Asus in Vietnam market. From early 2014 until now, the company has introduced two new Fonepad series, all using Intel's hardware configuration at a low price.

Fonepad 7 ME175 is the first Fonepad to support dual SIM, with decent performance, reasonable price and was introduced in April. The latest version of Fonepad 7, which was introduced earlier this month, has even lower prices, remains the same, but has a cut in screen and camera quality.

The Fonepad 7 FE170 has many notable features such as supporting two SIM calling, 3G and using the ZenUI interface that only appeared on the ZenFone line. With a selling price of 2.99 million dong, this is a remarkable product of Asus in the segment of cheap tablets.

Thanks to the thin screen border, the Fonepad FE170 is quite compact

When compared to its predecessor, the size of the significantly smaller Fonepad FE170 can be seen. On this product, manufacturer Asus has reduced the thickness of the screen border, so it looks cleaner. The back of the beveled machine, four rounded corners, so holding the machine with one hand is also more convenient. 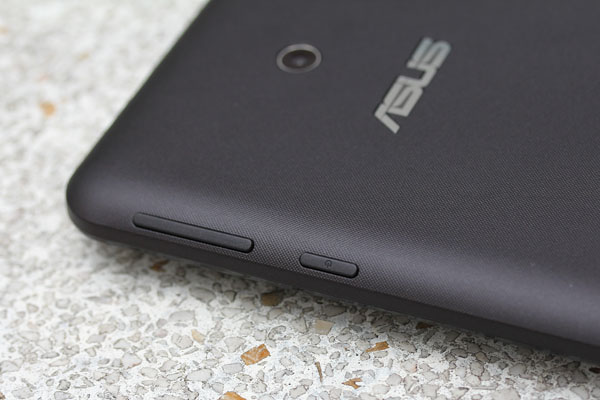 The device has three hard buttons, which are tilted to the back so it is difficult to press when holding the device with one hand. On the opposite side is the MicroSD and dual SIM card slot area, with a general cover. Both SIM slots use MicroSIM standard. 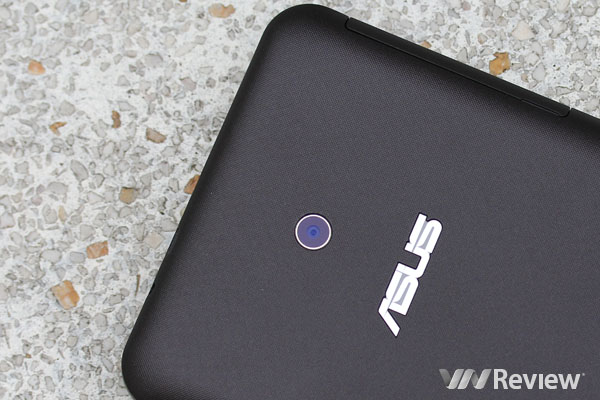 Fonepad FE170 back cover uses plastic material with embossed pattern, which helps reduce fingerprinting phenomenon. The speakerphone of the device is placed in the same place as the speaker on the top of the screen, only the front camera is available, not the light sensor. Machine still has a common drawback on low-cost tablets is that the screen is very susceptible to fingerprints. 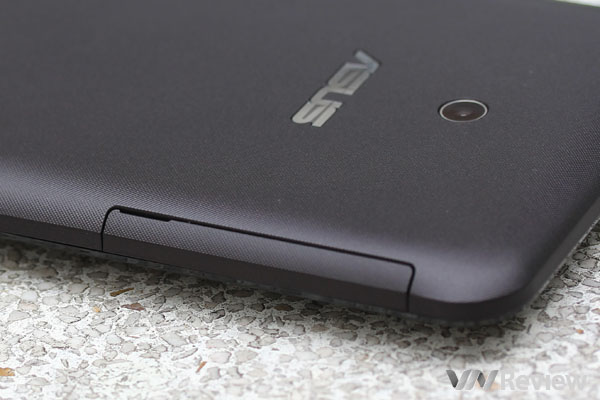 The design of Fonepad FE170 is not much different from the previous generation products, but thanks to the reduction of the screen border, it is compact and easy to hold. The material that Asus uses is also quite good, so in addition to the drawback is the screen is fingerprinted, the design of the machine is less suggestive of feeling a cheap tablet. 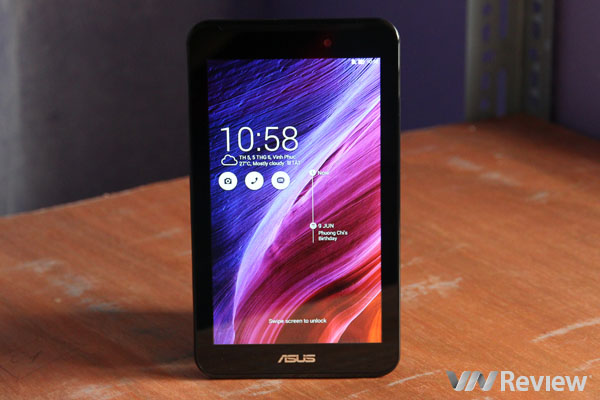 The 7-inch screen of the device has a resolution of 1024 x 600 pixels with a pixel density of 170 PPI. With a relatively low resolution, the screen of Fonepad 7 is not sharp, but this is also a common weakness of low-priced tablets. When compared to Fonepad 7 ME175, the screen of the screen does not use IPS technology, so the viewing angle is poor, especially from the left to the horizontal view. Due to the narrow perspective, the experience of playing games or watching movies on this tablet will be limited. 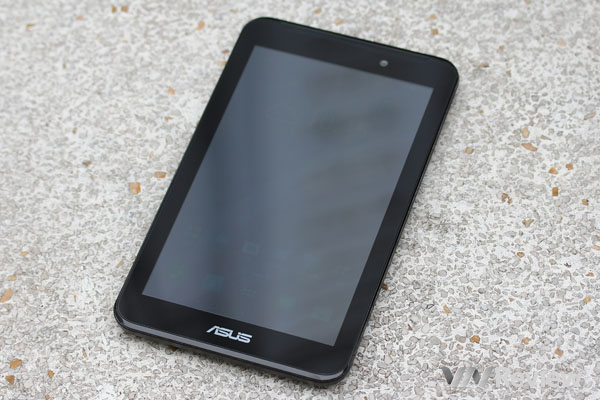 The screen is very shiny, the viewing angle is poor so it is difficult to use outdoors

The maximum brightness of the screen we measured is 346 nit. This brightness is enough to be used indoors, but the screen of the balloon machine when used outdoors will be difficult to see. Because there is no light sensor, it does not have automatic brightness adjustment mode, so users have to manually adjust it. When using the evaluation process of VnReview screen, we found that the contrast of the machine is not high and the ability to display color accurately is low. 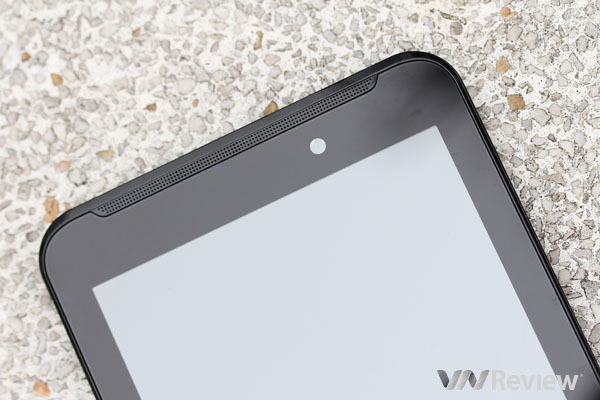 The speakerphone of the phone is placed in the same place as the speaker on the top of the screen, which is of low quality

Fonepad 7 speakerphone and speakerphone are integrated into one speaker slot on the screen. Therefore, when using a device that is placed horizontally, it is easy to see that the sound is skewed to one side. The volume of the speakerphone is quite loud, but the sound quality is nothing special.

The main camera on Fonepad 7 has a resolution of only 2 megapixels with HD video recording capability and 0.3 megapixel camera resolution. The camera resolution is low and the quality is not impressive. When using Fonepad 7 outdoor photography, the definition and brightness are only average, while when used in the house, the image is quite noisy. It can be said that Fonepad 7's camera is only at a reasonable rate, anyway, this is not a priority feature on cheap tablets.

The plus point of the camera feature on Fonepad 7 is in terms of software: the device is equipped with almost all software features on the ZenFone series. Compared to the ZenFone 5, Fonepad 7 only lacks 2 modes of low light shooting (reducing the resolution to increase the brightness when shooting at night) and the depth of field (removing fonts). Because camera quality is not high, most of the shooting modes do not work, except Selfie mode (using face detection technology, which allows the use of the rear camera to take selfies ). 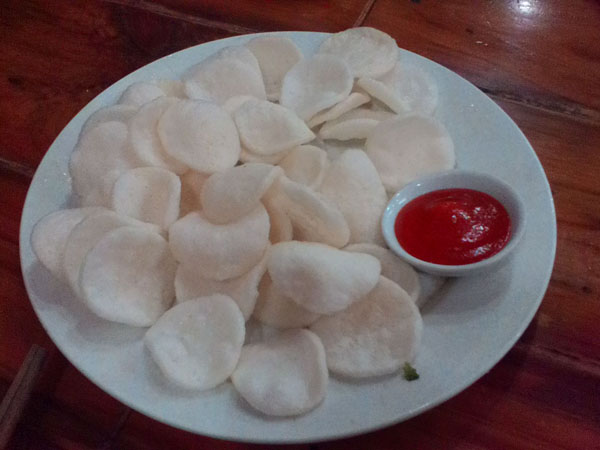 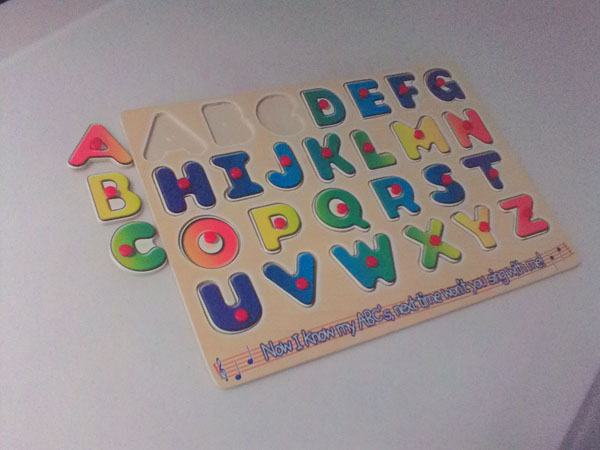 Some photos taken from Fonepad FE170 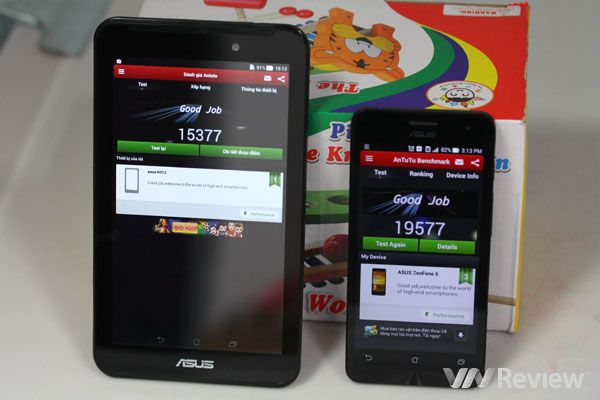 Fonepad FE170 is equipped with the same configuration as the more expensive version ME175, including dual-core Intel processor with 1.2GHz clock, SGX544MP2 graphics and 1GB RAM. This configuration is inherently sufficient to meet the basic needs, in addition the screen resolution is not high, so the machine works quite quickly. When you open screens, surf the web or watch videos on YouTube, the device responds well. Although sometimes the device is still stalled a bit, like after exiting the application and returning to the main screen, but overall the performance of the device is still quite impressive when compared to other low-cost Android tablets. 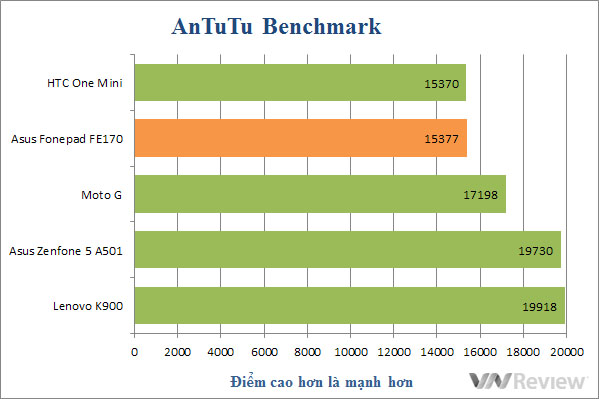 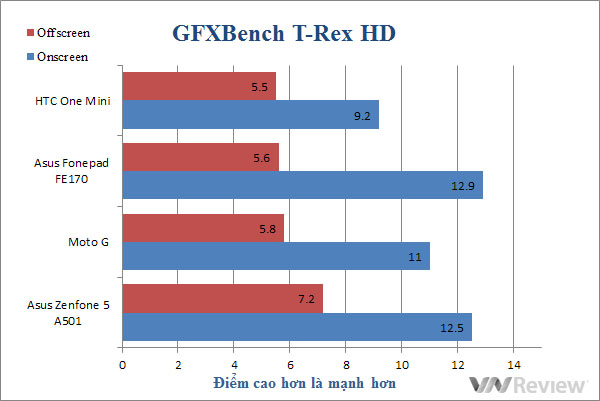 The battery of Fonepad FE170 has a capacity of 4,030 mAh. When using standard battery reviews, the device produced impressive results. Specifically, the device achieved 8 hours 29 minutes for the movie review and 4 hours 21 minutes for the review game, these are all high results.

Included in the product box is the charger with 1.35A output line. Because the charging intensity is not high, the time to fully charge the device is also quite long, it takes about 4 hours and 20 minutes to charge from the depleted state to full battery. 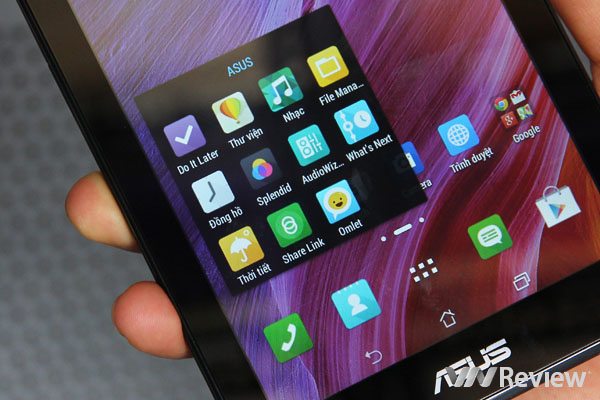 In addition to the ZenFone product line, Fonepad 7 is the first product to be installed ZenUI, gathering the interface and new applications of Asus. This is a feature emphasized by Asus, focusing on personal experiences such as reminders, reminders and work arrangements, along with some handy sharing features. 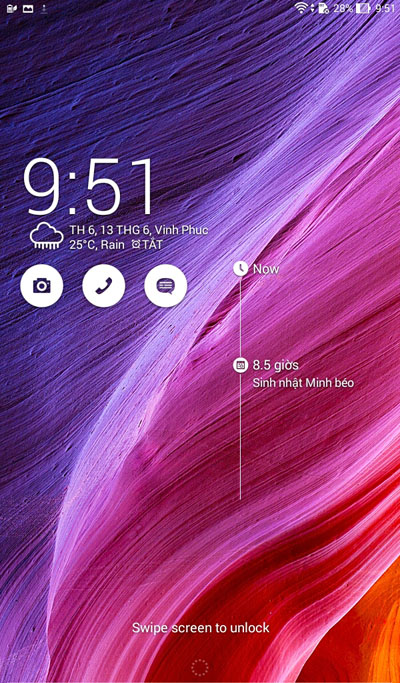 What's Next will display the jobs in the calendar right on the lock screen. If you pay close attention, you can see the Vietnamese translation error of this application 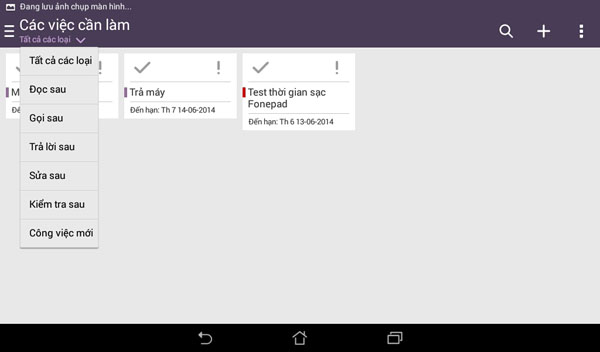 Because It Later will gather the tasks to be done, as well as the calls and messages to answer 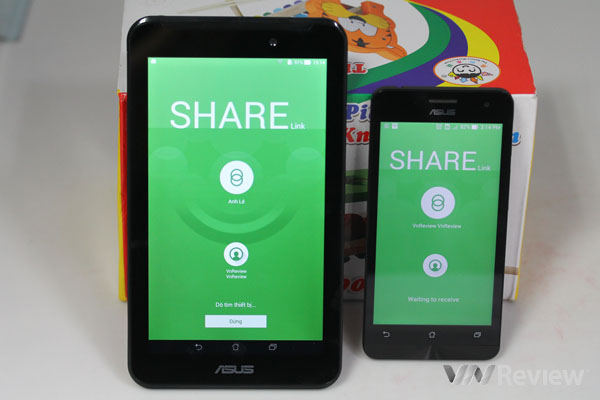 Among sharing features in ZenFone, Fonepad 7 only inherits Share Link feature, allowing two machines to send and receive files without the need for Bluetooth or NFC connection. When using this feature, the receiving device will use the mobile data connection to create a WiFi hotspot (WiFi hotspot), the sending machine will access the network.

This WiFi to send the file. So to use Share Link, one of the machines must have a data connection.

The first Asus Fonepad launched last year is a quite successful product, showing the real needs of users with tablet phones capable of calling. Perhaps due to realizing the potential of this product line, Asus has constantly launched "tablet phones" with increasingly cheap prices.

Fonepad 7 FE170 is the cheapest Fonepad today. At a price of 3 million, the price of FE170 is only equivalent to the low-end phones of major manufacturers, while having a bigger screen. Compared to cheap Android phones, the device also has good performance, long battery life, but the disadvantage is that the screen quality is not high. However, for users who want a versatile device and don't have much money, FE170 is still a cheap option.