In recent times, many network equipment vendors have introduced mesh network solution towards universal users. The common point of these products is that they are usually sold in sets of 1 – 3 transponders, supported by smartphone settings and the price is quite high.

As a well-known manufacturer for everything, Asus has joined the mesh game, but with its own solution called AiMesh. This is the solution that allows the support router to update the new firmware version, then each router becomes a transmitter for the new mesh network.

With AiMesh, users who already have an Asus router support it only by buying a router that can create a mesh network, expanding the broadcast area for the home or office. This solution is very flexible in terms of hardware, currently supports the following routers:

Among the supported routers, the cheapest devices cost over 3 million, and also belong to high-end and expensive routers. According to Asus, in the future, the company will launch AiMesh support transmitters at lower prices, allowing for easier coverage.

According to Dong Ngo analyst, to optimize the network performance, users should use the best router to make the main router connect to the modem, and the remaining routers play the role of network node. However, if the two routers have a 3-band support, the user should use that router as a node, since it can reserved the third band for back-haul connection.

Readers can learn more about the WiFi mesh network and how to set up through the article. Frequency of WiFi Network: What is it, is it better than a normal network, is it worth upgrading?

We use two Asus routers to create an experimental mesh network

Both routers are updated to the latest firmware version downloaded from Asus homepage at the time of evaluation (September 25, 2018).

Setting up AiMesh is very simple. First, users only need to reset both routers, then set up the main router as usual, including connecting to the modem, setting up WiFi name and password. 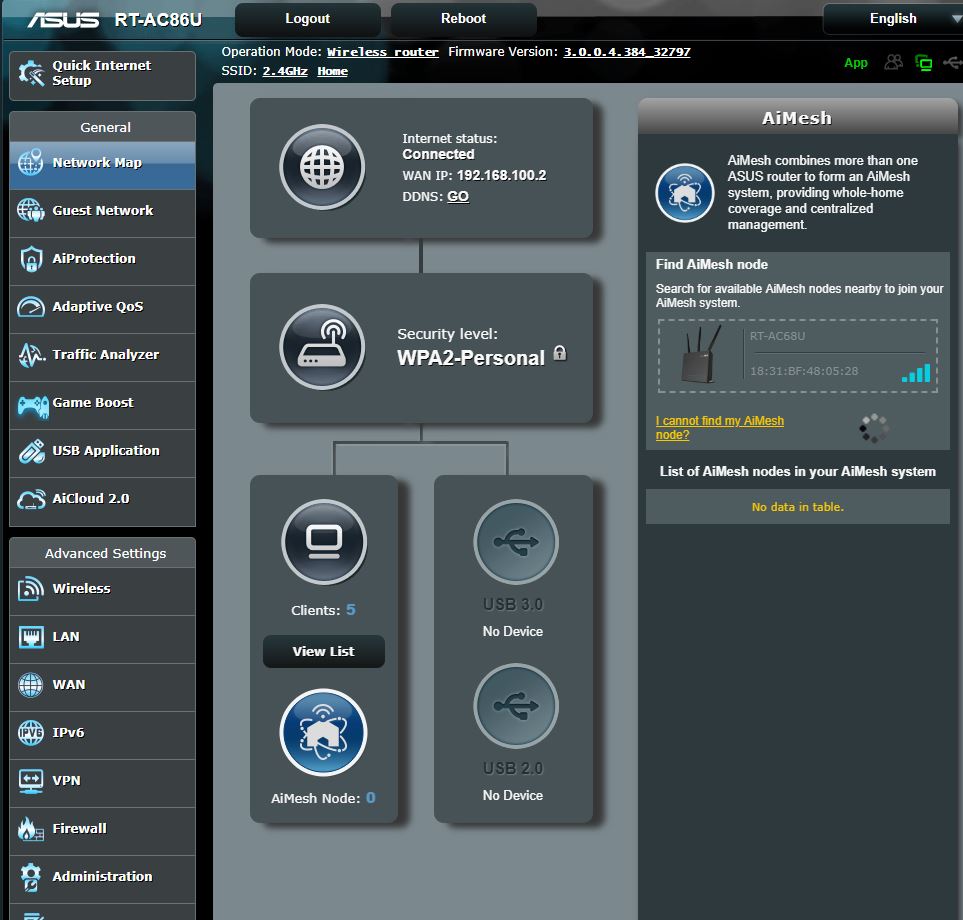 After setting up the main router, just press one more button in the settings as the system will find the node itself and add it to the network

To add an AiMesh node, simply power on the remaining router, then go to Network Map, AiMesh on the main router to find the node. The process of setting up the node later is entirely done by the software itself. 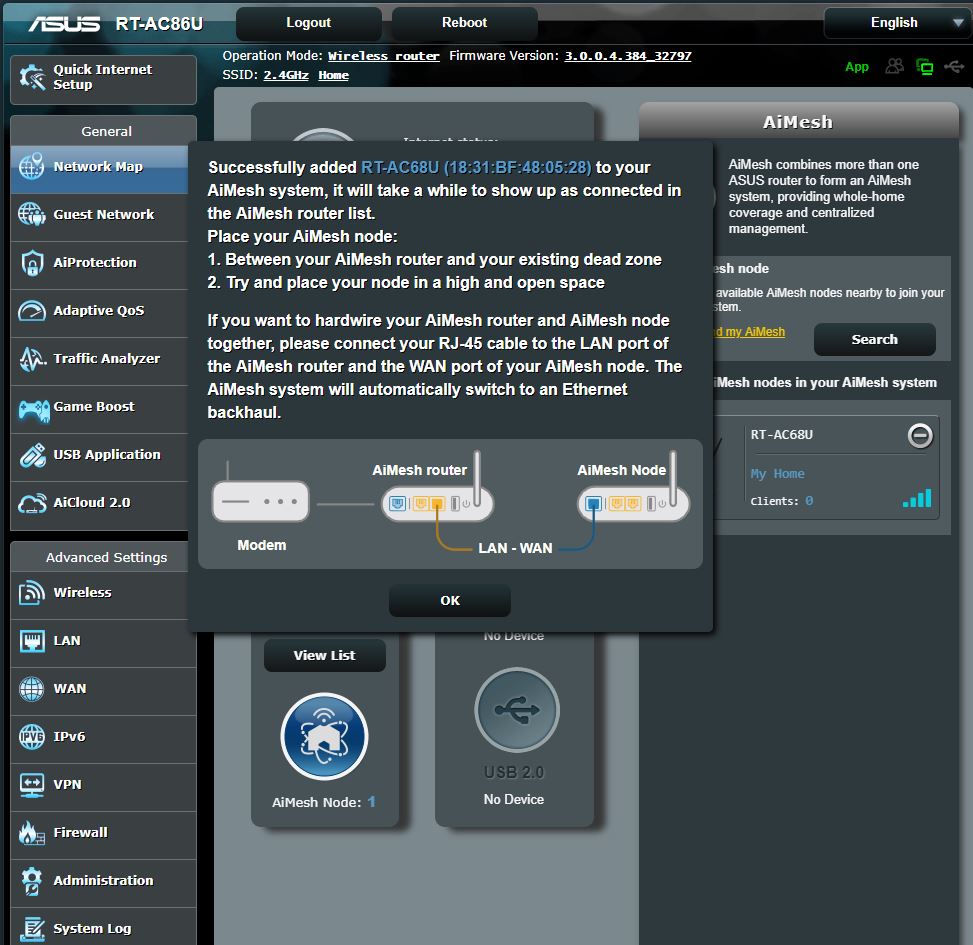 The setup process is very fast, only takes about 15 minutes

The whole process of setting up from the beginning takes only about 15 minutes, the setup is quite simple. When you need to update the firmware, you only need to access the router's interface to update both routers.

The downside of AiMesh system compared to other systems is that you need the computer to access the web-based control interface most easily, and most mesh systems now support setup via an application.

Quality evaluation of actual use

In order to assess the coverage and speed in practice, we installed AiMesh system in a house with an area of ​​60 m2 including 3 floors, each floor has 2 staircases in the middle, plus more space The front yard is about 20 m2. 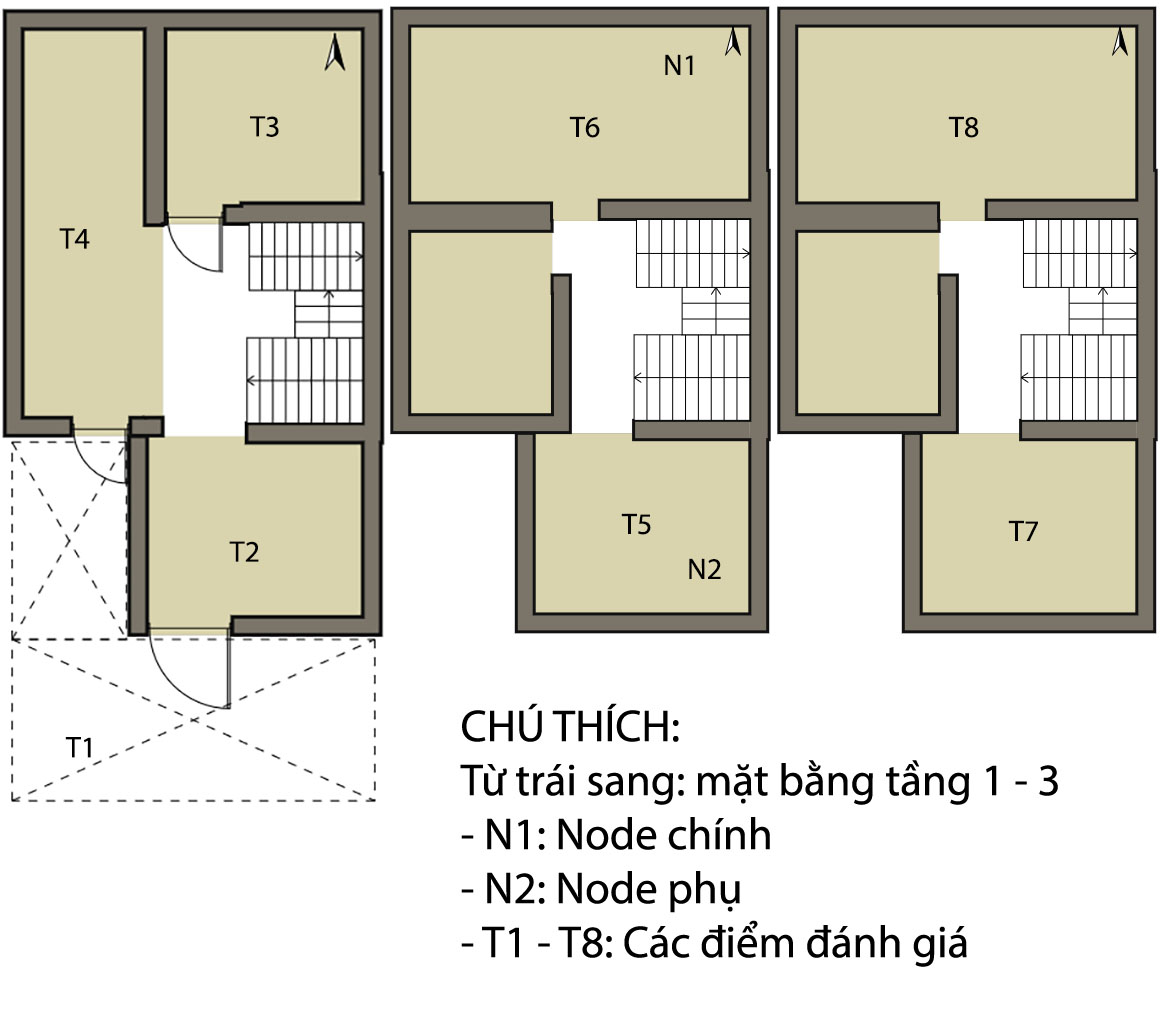 The main router connected to the modem is located at position N1, the other node is placed on the 2nd floor to connect best to the main node. Evaluation location using FPT F2 fiber optic package, has a theoretical access speed of 55 Mbps. We evaluated the wave intensity, network speed and stability by using Oppo Find X smartphone.

To test the wave intensity, we use the WiFi Analyzer application on Android. On the router the user can set the SSID (network name) for each wave band. The 2.4GHz band has the advantage of coverage, but if you want the highest speed, users should choose to connect on the 5GHz band. 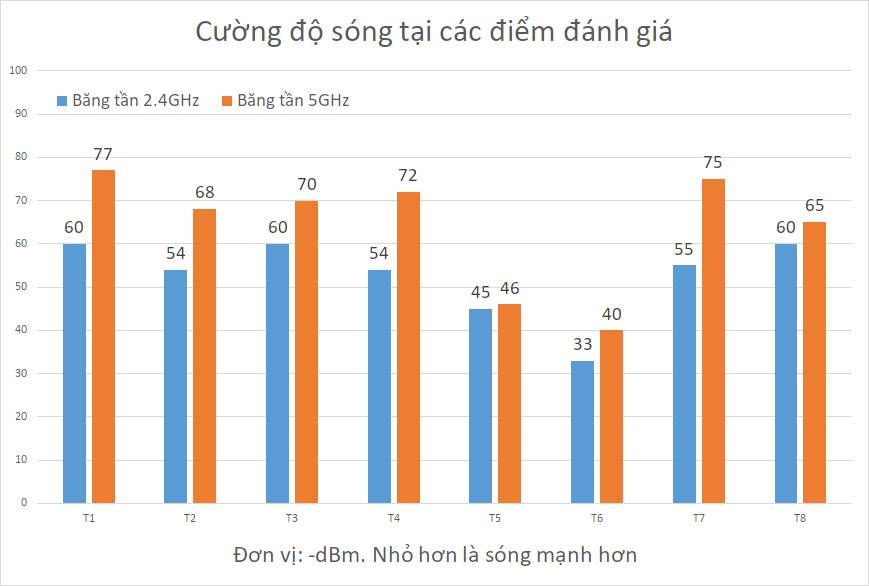 Even if there are only two network nodes, indoor WiFi is always good, never falling below -60 dBm with 2.4GHz. It can be said that each router itself is a high-end device, many antennas with wide coverage, so when combined together, it is enough to cover a much wider area than the experience space.

Besides, the 5GHz band also always reaches below -80 dBm, so it is still enough to ensure connection and speed is not affected. This is reflected in the assessment of network connection speed.

To test network speed, we use Speedtest application, let the application select the server and rate the download / upload speed at points.

When connecting to the 5GHz band, the WiFi speed almost always reaches the maximum level, only slightly lower at T1, also the farthest point from the two broadcast stations. So if using a smartphone or laptop that supports 5GHz network, users can be assured of connecting and reaching the maximum speed at every point in the house. 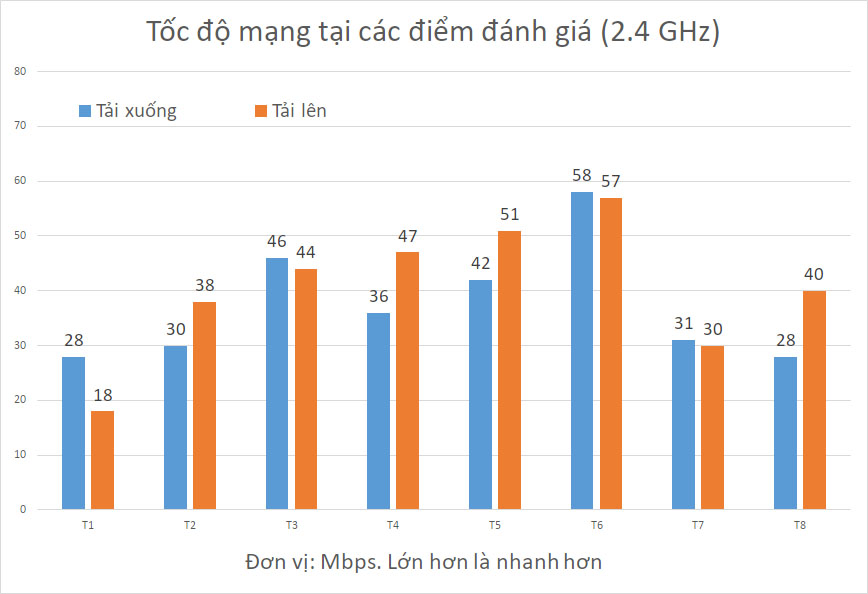 However, with 2.4GHz band, the results are not as uniform as before. The highest speed is guaranteed only near the router (point T6, the same room where the router is located). At the node placement (T5) and downstairs near the router (T3, T4) the speed is about 80%, while in the remaining points only about 50-70%.

The cause of the slowdown may be because the 2.4GHz band is more popular on WiFi transmitters, and we cannot select a broadcast channel that does not coincide with neighbors' devices. In fact, most smartphones and new network devices have a 5GHz band, only old or cheap smartphones are limited to 2.4GHz.

To check connection stability and automatic roaming capabilities, we use devices to move through all points. With the actual user review, we played PUBG games and watched a YouTube video at 1080p resolution, then went through the points to see if the device was disconnected.

Both YouTube games and videos handle smoothly without losing frames when moving through points and rooms in the house. This is a plus compared to the solution using the extended transmitter, because when you move you will have to disconnect yourself from the old access point and connect to the access point closer, otherwise the device will keep connecting to the access point. old until the connection is completely lost, although the wave intensity can be very small.

Next, we use the Ping Tools application, give ping machines continuous access to Google.com and move through points. After going all the points in the room for about 3 minutes, the machine only missed 3 packets. Thus, it can be seen that when using actual, AiMesh system supports very smooth transition, low latency so it almost does not affect use.

AiMesh is a very interesting solution of Asus. Instead of having to buy a new set of devices to set up a mesh network, users using the Asus router need only add a new router to create a system with a wider coverage and, importantly, forwarding and utilizing capabilities. Advantages of mesh network.

In addition, the main functions of the router remain the same, so if you need the network security and management features of the router, this will be the best choice for users. On the other hand, Asus' installation interface is still a bit more complicated and it is best to use a computer to set up, while most mesh network systems use applications on smartphones.

During actual use, AiMesh system also provides connection speed through the less impressive 2.4Ghz band. As we said above, this will only affect old, cheap devices. To optimize network speed, users can consider connecting nodes with cables instead of wireless connections.

At the present time, AiMesh has only been supported on devices from medium to high. In the coming time, when Asus launches compact and more affordable transmitters, this will be a remarkable option.