Apple warns that if the US government continues to impose 25% tariffs on many Chinese import groups, Americans are at risk of buying many Apple products, including iPhones at a more expensive price.

According to the Macrumors, Apple is urging the Trump administration to stop imposing a 25% tax on the fourth group of goods imported from China. These goods include products such as iPhone, iPad, Mac, Apple Watch, Apple TV, AirPods, Beats, HomePod, batteries and some repair components.

In a letter to US Trade Representative Robert Lighthizer earlier this week, Apple warned tariffs would reduce Apple's contribution to the US economy and reduce its competitiveness in the global market.

Apple claims that it will suffer from Chinese smartphone companies because it benefits from domestic supply of components and manufacturing. Meanwhile, Apple has to depend on the production line of equipment in China.

That's why Apple has been urging its production partners to shift around 30% of their lines to other countries soon to avoid the impact of the trade war. However, in the long run, this is not entirely feasible because China is still the world's factory with leading production capacity.

It is clear that the goal of the Trump administration's tariffs to balance the trade balance between the two countries will create side effects, which are advantages for Apple's competitors.

Also in the campaign letter to Mr. Robert Lighthizer, Apple also emphasized the merits that Apple has contributed to the United States to create the basis and confidence for the rulers. Apple even called itself "pride of America". Simply because Apple is the taxpayer and provides the largest job for America. 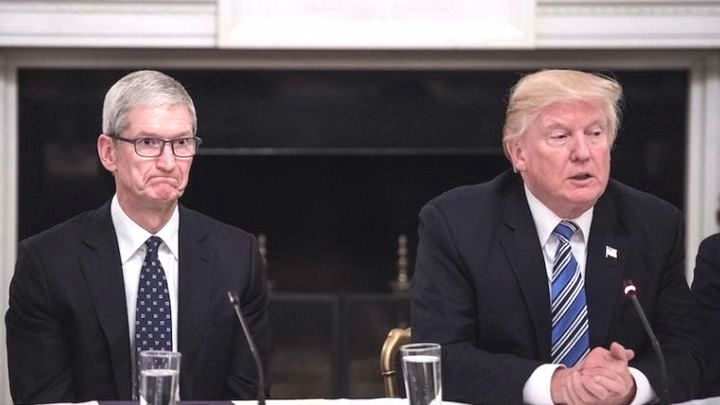 Apple representative wrote: "Apple is proud to be an American company and one of the most productive places in the US. We create more than 2 million jobs in all 40 states, including direct employees at Apple, multiply. at production partners and retailers, …

In 2018 after the tax reform in the US, Apple announced it would contribute directly to the US economy of more than US $ 350 billion in five years and we are happy to report that Apple is on the right track to keep that commitment. . We are opening some new sales locations and providing more jobs for Americans. Apple is currently the largest corporate tax payer for the US Treasury. Every year Apple also pays billions of dollars for local assets, sales activities and income taxes for employees.

Finally, most families, students, businesses, government agencies, schools and hospitals use Apple products to communicate, teach, improve health outcomes and enhance creative ability in the enterprise. Last month analysts at J.P bank. Morgan estimates that a 25% tax rate may increase the retail price of iPhone XS by 14%, pushing the selling price from 999 USD to 1,142 USD ".

In the context of the US government still being tough on Huawei, Apple and many US companies are suffering from the executive decree and suffering from commercial wars.

Even so, in any battle, both sides suffer losses, even those who stand outside as consumers also suffer. For example, the increasing price of iPhone will make users less interested in the iPhone.