Apple brought out its iPhone 12 Pro Max in October 2020. Landing in our Ultra-Premium segment (above $800), the iPhone brings with it a large 6.7-inch OLED display that supports HDR10 content, and a quad-camera setup. Unlike most other phones in our database thus far, however, it does not come with a charger.

We recently tested the Apple iPhone 12 Pro Max’s battery performance and will relate our most important findings in this review.

With an overall Battery score of 78, the Apple iPhone 12 Pro Max puts in a respectable performance that lands it in the top four in our database so far. While it has an average score for Charging, and an above-average score for Autonomy, it is the current score leader for Efficiency thus far (but as ever, numbers alone don’t quite tell the whole story).

We compared the Apple iPhone 12 Pro Max’s performance in several key categories with two other ultra-premium devices, the Samsung Galaxy S21 Ultra 5G (Snapdragon) and the Oppo Find X3 Pro; battery capacity, charger, display type and resolution, and processor specifications for all three devices are shown in the table below.

At 67, the Apple iPhone 12 Pro Max’s Autonomy score puts it into the upper half of devices tested so far (regardless of segment), and is better than the Autonomy scores for all other ultra-premium smartphones to date. Let’s now dive into some specifics.

The Apple iPhone 12 Pro Max achieved an above-average score of 70 in our stationary TUS testing, again leading all other ultra-premium devices in our database to date, and providing more than two days — 61+ hours — of autonomy, some 4.5 hours more than the Samsung Galaxy S21 Ultra 5G (Snapdragon) and almost exactly more than 15 hours than the Oppo Find X3 Pro used in our comparison here.

The iPhone 12 Pro Max’s on the go score of 64 is only average — a few points behind the Samsung, but ahead of the Oppo Find X3 Pro by 15 points. The Apple device is better for camera use on the go than both competitors, but it trails the Samsung just a little in all other activities (phone calls, GPS, social apps).

Among the three ultra-premium devices in this comparison, the Apple iPhone 12 Pro Max took top honors over the Samsung Galaxy S21 Ultra 5G (Snapdragon) by a few points, and by nearly 20 points over the Oppo Find X3 Pro, showing better performance than both in 4G music and video streaming. That said, it was behind the Samsung device for 3G calling and video playback.

The DXOMARK Battery charging score is composed of two sub-scores, Full charge and Quick boost. Full charge tests assess the reliability of the battery power gauge; measure how long it takes to charge a battery from 0% to 80% capacity and from 80 to 100%; and measure how long and how much power the battery takes to go from an indicated 100% to an actual full charge. With the phone at different charge levels (20%, 40%, 60%, 80%), Quick boost tests measure the amount of charge the battery receives after being plugged in for 5 minutes.

Apple iPhone 12 Pro Max has relatively good charging time (considering the power of its charger) until it reaches 80%; after that, it charges very slowly when compared to the Samsung and especially when compared to the Oppo, for a total charging time of 2 hours 27 minutes versus 1 hour 28 minutes for the Samsung and just under 37 minutes for the Oppo.

Although it cannot compete at all with the Find X3 Pro’s astonishing sub-score of 104 (achieved via its 65W charger), the Apple iPhone 12 Pro Max isn’t too far behind the Snapdragon version of the Samsung S21 Ultra in our full charge testing. The Apple device takes much longer than the competition to go from 80% to 100%  — nearly a full hour versus about 20 minutes for the Samsung (and only about 6 minutes for the Oppo).

The Apple iPhone 12 Pro Max’s wireless charging takes 3 hours 1 minute to charge to 100% (per the device UI) and an additional 28 minutes to reach full charge capacity, which is nearly twice as long as the lightning-fast Oppo Find X3 Pro.

Although it comes in last among the three devices compared in this review (but only very slightly behind the Samsung), the iPhone 12 Pro Max provides nearly 3.5 hours of autonomy when plugged in at less than 50% power remaining.

While the Apple device takes a fairly quick 45 seconds to gain 1% battery power while gaming at low battery, that’s nonetheless a few seconds behind both the Samsung and the Oppo in our testing.

Our Efficiency score comprises two sub-scores, Charge up and Discharge. Charge up is the efficiency of a full charge (how much energy is drained from the wall outlet vs the energy capacity of the battery, as well as the efficiency of the charger and its residual consumption). Discharge is how much current the smartphone drains from the battery when in use (the ratio of battery capacity over autonomy). Better autonomy with a smaller battery means better efficiency.

While its somewhat small 20W adapter by itself is quite efficient, the Apple device’s overall charging system (which includes not just the charge adapter but also internal smartphone circuits) was one of its only true weak points, coming in behind not just its Samsung and Oppo rivals in this review, but also behind the majority of devices in our database thus far. 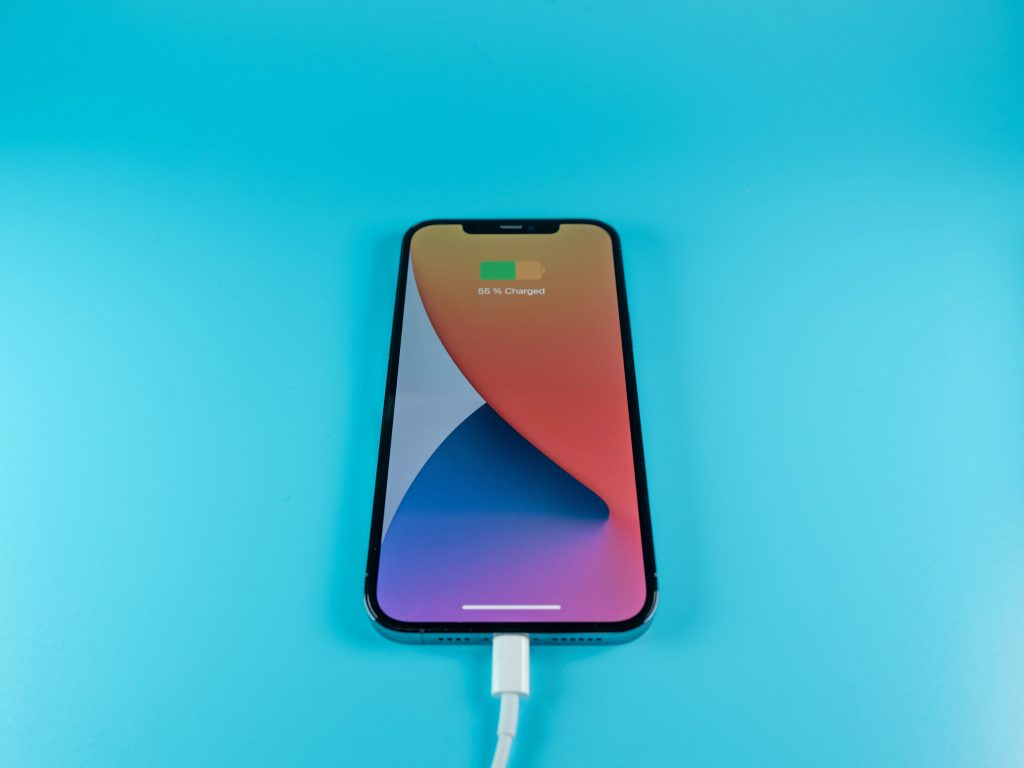 The Apple iPhone 12 Pro Max’s 116 points for discharge efficiency towers far above all others in our database thus far, with only one other device showing a triple-digit score (the Wiko Power U30 in our Essential segment, with 102 points). It has lower consumption than all devices in both active hours and in the nighttime, and among its competitors in this review, it shows considerably lower consumption than either the Samsung or the Oppo for music and video streaming.

The Apple iPhone 12 Pro Max is among the top 4 in our Battery database so far, with good scores in Autonomy, average in Charging, and an outstanding score for discharge in our Efficiency attribute. Where it could have done better was in charge up Efficiency, where its score was among the lowest among all devices tested so far (only 66% charging efficiency).