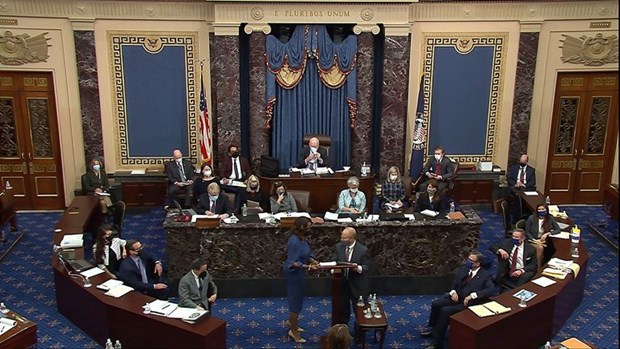 According to the Vietnam News Agency reporter in the US, on February 10, the trial of former President Donald Trump continued. Under the impeachment process, the Congressmen in charge of the House of Representatives will assume the role of prosecutors, and Mr. Trump’s attorneys, each side will have 16 hours in two days to present their arguments. . The Washington Times said that the trial could end as early as the weekend.

Prosecutors are expected to use security videos to demonstrate the “extreme acts of violence” of the January 6 riots on Capitol Hill and show Trump’s loyal supporters. how close to the legislators.

They worked hard to prove that Mr. Trump did inciting violence by steadfastly refusing to accept defeat and seeking to prevent Trump from holding any future public office positions, including entering the race for White House boss in 2024 .

In the meantime, Mr. Trump’s lawyers have called on the Senate to dismiss the allegations they believe Unconstitutional and it was “absolutely wrong” to assume that their client played a role in the riot.

At the impeachment trial on Feb. 10, prosecutors argued that Mr. Trump carried out a lengthy campaign to convince his supporters that the 2020 election was stolen, leaving them in disarray. outrage at the blind belief that the results of the election are fraudulent, as well as inciting them to violently disrupt the process. devolution in peace.

Colorado Rep. Joe Neguse – one of the prosecutors emphasized: “Trump’s false statements about electoral fraud, a exhortation to inspire, incite and incite voters. be loyal and make them angry, ”and argued that Mr. Trump used the speech to incite his supporters to stop the election results.

In addition, Rep. Jamie Raskin of Maryland started his presentation arguing that the 6/1 rebellion was the culmination of Mr. Trump’s behavior for months when he falsely claimed the election. has been stolen. Mr. Jamie Raskin also noted that Mr Trump “was not an innocent bystander.“

Previously, on February 9, the US Senate voted to continue the impeachment process against former US President Donald Trump with the allegation of “inciting riot” related to the group of protesters attacked. National Assembly building on January 6, killing 5 people.

With 56 votes in favor and 44 against, the US Senate rejected the former lawyers’ arguments President Donald Trump when he said that the impeachment session was inconsistent with the US Constitution because Mr. Trump is no longer the US president, and emphasized that this would cause great damage and divide the United States.

However, the results of this vote also show that Democrats are expected to face many difficulties during the impeachment process of Trump, when at least 17 votes of support from Republicans are needed in this process./.