All you need to drive an electric car in winter


The cold and the snow affect the energy consumption of vehicles, be they gasoline, hybrid or electric. Cold air, denser than warm air, and winter tires, designed to better adhere to the ground surface, slightly increase resistance. In addition, accumulations of snow on the road can slow down vehicles. To advance at high speed, they therefore consume more gasoline or electricity.

That said, low temperatures remain the most energy-hungry element for all types of cars. In a gas-powered vehicle, for example, the cold increases fuel consumption, especially because the engine needs to warm up. For example, a journey at -7 ° C requires 12% more fuel than the same trip at 25 ° C, says the US Environmental Protection Agency.

The Tesla Model S 100D * has the most autonomy on the market, but the data provided by its manufacturer confirms that its battery loses autonomy in cold weather, as is the case for all electric cars. At what point ?

* The biggest battery available for this model. 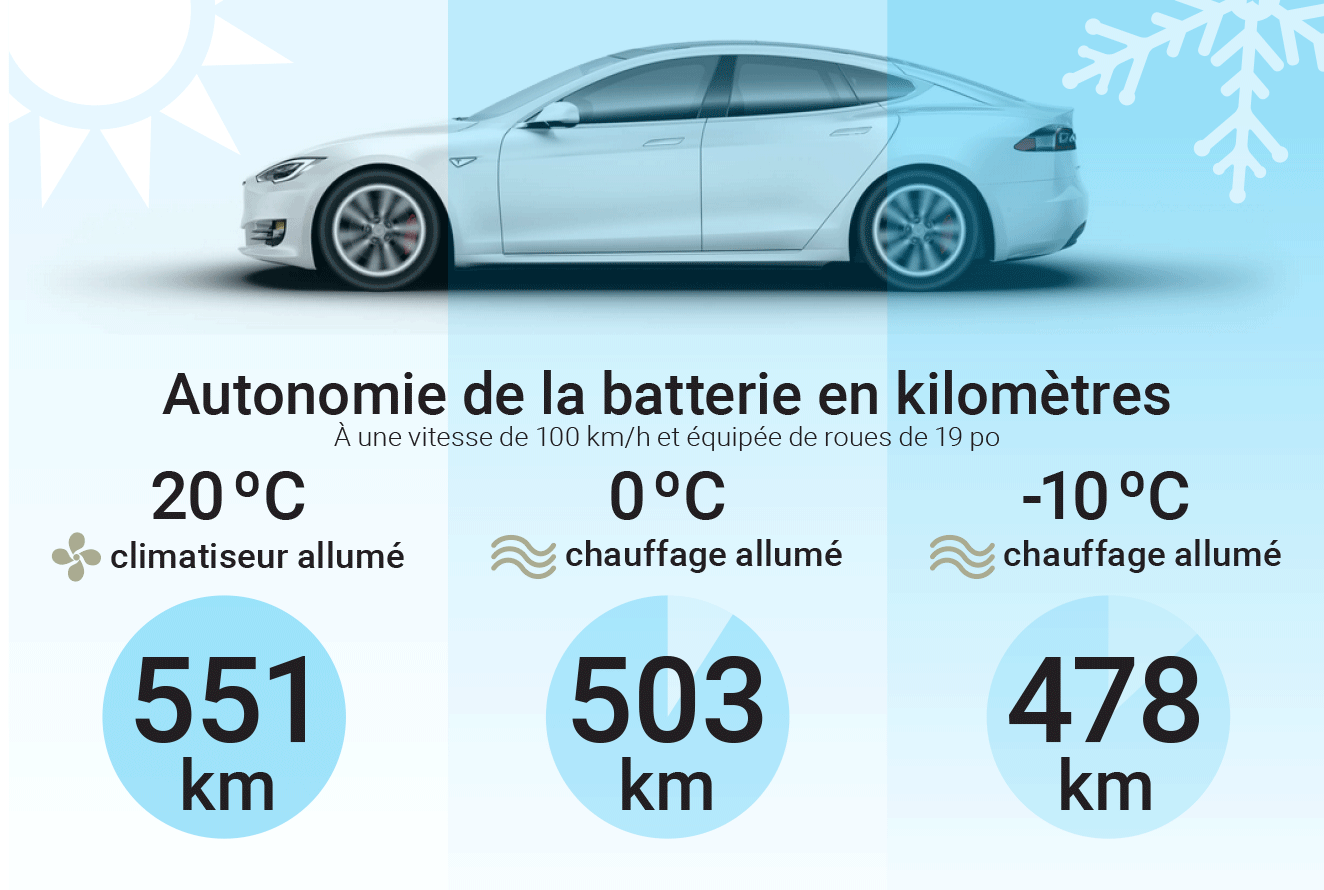 If it is 20 ° C and the battery is 100%, you can drive 551 km. By -10 ° C, this autonomy decreases 73 km (-13%). It certainly goes down when the temperature goes down, but Tesla does not push the transparency up to tell us exactly how much. Also note that these values ​​are always theoretical: the actual range of your car also depends on other factors, such as your driving style, road conditions and the age of the battery.

The cold is particularly pitiless for electric cars, which then see the autonomy of their battery decrease. As soon as the mercury goes below zero, the battery loses efficiency, explains Stéphane Pascalon, program manager at the Institute of Innovative Vehicle (IVI), a Quebec NPO that supports projects for the development of innovative technologies in the transportation field. . "Up to -5 ° C, there's a slight decrease (in range), which varies by vehicle," he says. But below -15 ° C, the loss of autonomy is really felt. "

It is because the cold prevents electric batteries from restoring all the energy they contain. The battery must first warm up, which happens as the car moves. Thus, in cold weather, the autonomy will be better if you ride long than if you only make short trips. If you do less than 10km each time you move, your battery could have 40 to 50% less autonomy at -30 ° C than during the summer, illustrates Stephane Pascalon.

Fortunately, you can change your driving habits, so that your electric car retains good capabilities in the winter. Here's how to do it.

"Driving is the factor that has the most influence on the maintenance of the autonomy of an electric vehicle, and this, throughout the year," explains Stéphane Pascalon. But to thwart the cold and its effects on the battery of your vehicle, it is necessary to redouble attention in winter.

For example, when the temperature is below -15 ° C and your car has slept outside, keep in mind that the battery in your vehicle is cold and its energy is temporarily limited. To avoid the risk of emptying too quickly, avoid strong acceleration during the first 10 to 15 kilometers, until it reaches its optimum temperature. You will then be able to demand more power from your vehicle, remembering that any rapid acceleration following a stop, as well as sudden driving, consumes more power.

Thus, to maintain a good range, require strong acceleration only when the situation requires it (when passing, for example) and observe the flow of traffic to avoid as much as possible to have to stop your car. Think about your bike outings: it's always harder to start pedaling than to maintain your speed once it's started. The same energy effort applies to an electric car.

The other enemy of autonomy is speed: the faster you roll, the lower the capacity of an electric battery. "If, for example, you reduce your speed from 110 to 105km / h, you will gain 5% autonomy," says Stéphane Pascalon.

>> Read also: How to drive the winter safely and How to choose a winter driving course

Warm, but not too much

In an electric car, the energy contained in the battery is consumed not only by the engine, but also to warm the cabin. In a gasoline car, the fuel is used to drive the vehicle, but also produces heat that can be used for heating.

If you have an electric vehicle, you must remember that the more you mount the thermostat, the more you decrease the battery life. "The best solution is to lower the temperature of the passenger compartment from 22 to 19 ° C and to use the heated seats. They consume less energy and keep the body warm, "advises Jesse Caron, automotive expert for CAA-Quebec.

The expert adds that "certain electric vehicles, such as Kia Soul or Hyundai Ioniq, offer the choice of a heating mode directed solely towards the driver". This feature is useful for reducing heating energy consumption when you do not have a passenger on board.

However, it is not recommended to completely shut off the heater in the cabin, as this may cause condensation on the windows, which will reduce your visibility. Moreover, when it is cold, do not refrain from turning on the defrosting systems of the windshield and the rear window, to see what is happening around you.

Preheat the passenger compartment at the terminal

It is possible to heat the passenger compartment of an electric vehicle before using it. And because these cars do not emit any greenhouse gases, you will not risk a ticket if you leave the engine running on the street, which can happen in some municipalities with gasoline cars.

Preheating your electric vehicle when it is plugged into a charging station will allow you to enter a warm cabin without decreasing the battery life. Another advantage: once on the road, keep the car at a good temperature will be more energy efficient than if you had to "thaw" quickly the cabin.

Everyone does not have a parking lot, let alone an indoor parking … and heated! Still, if you can, store your electric car in a heated garage overnight. The battery will maintain an optimal temperature since it will not be exposed directly to the cold.
If you have access to a garage, it is also advisable to install your charging station. Although the bollards are designed to be able to operate outdoors in winter conditions, you will save yourself some miserable mornings from stumbling over a frozen charging gun or stuck in the charging port of the car.

Doing well to recharge your car during the cold season can save you precious kilometers. For example, when you plug in your car when you come home at night, you can program it to charge the battery at a certain time. This operation, which is offered in all electric vehicles, is done using the vehicle's integrated multimedia system or a downloadable application on your smartphone. If you have to get behind the wheel at 8 am and your car takes four hours to regain full charge, schedule charging at 4 am. Since the battery warms up when recharging, it will be at the ideal temperature when you leave the house, which will improve its autonomy.

If you have to travel a long distance in cold weather (from 0 ° C, but especially to -15 ° C and below), take into account that you may need to recharge more than in summer. For example, the Hyundai Ioniq EV has a maximum range of 200km, which drops to around 150km in winter. Thus, if a driver wants to travel 180km, he will have to recharge his car at least once. For its part, an owner of Tesla Model S 100D (range of 500 to 400km in winter) can travel the same distance back and forth with a single charge.

RECHARGE TERMINALS are offered in Quebec by the Electric Circuit. Of these, 1,404 are 240-volt terminals and 124 are fast-charging (400 volts).
Source: Government of Quebec, October 2018.

Unlike 100% electric vehicles, the plug-in hybrid models have a gas engine that heats the cabin, defrost windows and take over when the battery has reached the end of its resources.

To maximize your fuel economy in winter and maintain a good electric autonomy, do as with 100% electric cars. Preheat your vehicle, park indoors and recharge just before you hit the road.

On the other hand, take into consideration that cold (-15 ° C or lower) can slow down the refills you make at a fast charging station. This type of terminal sends more voltage – 400 V, instead of 240 V to a regular terminal at home – so you can recharge in less time. However, when the battery is very cold, the terminal slows down the process to avoid damaging it with too much load.

For this reason, you should avoid connecting your car to a speedometer just after it has "slept" outside on a freezing night. The operation will not damage your battery, but charging may be very slow. This disadvantage does not apply to the 240 V terminals, as there is no noticeable difference in winter cooldown.

It is also recommended to connect your car as often as possible during periods of extreme cold. In case of prolonged immobilization outside, also make sure that the load is not too low. Difficult to know exactly the percentage of critical load to be respected to be able to start his vehicle in this situation. But be aware that in general, if there is 10% battery life, it is safer to recharge it if you know that your car will stay without driving for several days at a very low temperature.

Even though electric vehicles usually start without any problem in very cold weather, it is better, when the mercury drops below -20oC, not to leave your car parked for several consecutive days outside without using or connecting it. "Your vehicle may not start," warns
Stéphane Pascalon, IVI.

>> Read also: our test of more than 30 winter tires

Boost your vehicle as needed

If your vehicle refuses to start or runs out of battery, you can "boost" it, like a gasoline vehicle. But beware: "You must carefully read the manual to avoid damaging the electrical system, and call a professional if in doubt," advises Stéphane Pascalon. The CAA also inaugurated, in October2018, a repair service for electric vehicles.

Contrary to popular belief, there are two batteries in an electric car: a big, called "traction", which serves to advance the vehicle, and another, smaller (12 volts) and similar to what we found in gasoline cars, which powers some systems and activates the main battery. So, if the 12-volt battery is dead, your car will refuse to start even if there is still a lot of energy in the traction battery. But if you use your car often and recharge it regularly, it will work every day without any problem, even in very cold weather, because as soon as the vehicle is plugged in, both batteries recharge. There is no need to worry about the charge level of the 12-volt battery.