In addition to the high portability that the laptop brings, the Lenovo ThinkPad T14s also possesses a strong level of performance from the 8-core AMD Ryzen 7 Pro chip. The article reviews the ThinkPad T14s in detail, thereby pointing out the strengths and weaknesses of the product line. 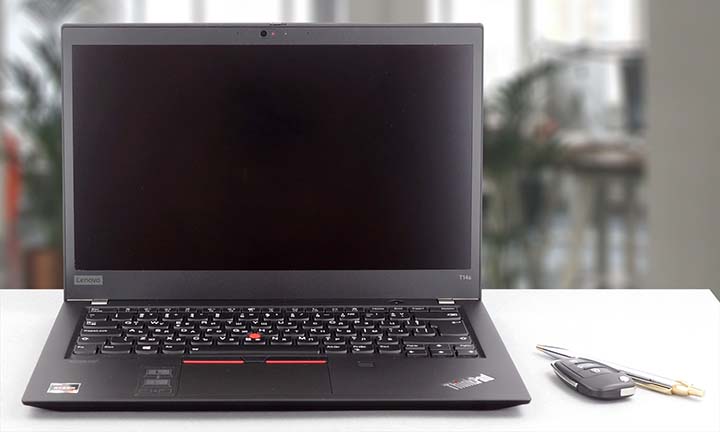 The ThinkPad T14s series has 2 processor versions, Intel and AMD. The Intel version of the machine has a higher starting price and supports the Thunderbolt 3 high-speed connection standard, while the AMD version we used in the review only uses the USB Type- Common C.

And similar to the Latitude, the ThinkPad T14s also meets the MIL-STD 810G military endurance standard. This means that the laptop is resistant to strong impacts along with different extreme weather conditions.

Located on the body, you can find the laptop’s fingerprint security scanner. This scanner allows me to quickly and accurately log in to the system account correctly and securely.

The screen of the ThinkPad T14s is wrapped inside a mid-range bezel, just enough space to accommodate the 720p webcam on the top edge. This webcam supports face recognition, allowing users to easily log into the system through Windows Hello software. In addition, you can also close the webcam’s physical lens when not in use.

Both of the machine’s USB Type-C ports support battery charging, located on the left edge of the ThinkPad, along with 1 USB 3.2 Type-A port, 1 HDMI port, headphone/microphone jack and Ethernet port. Meanwhile, on the right side is a USB Type-A port, a Smart Card reader slot and a Kensington anti-theft lock slot. The device’s microSD card reader is located on the back edge. 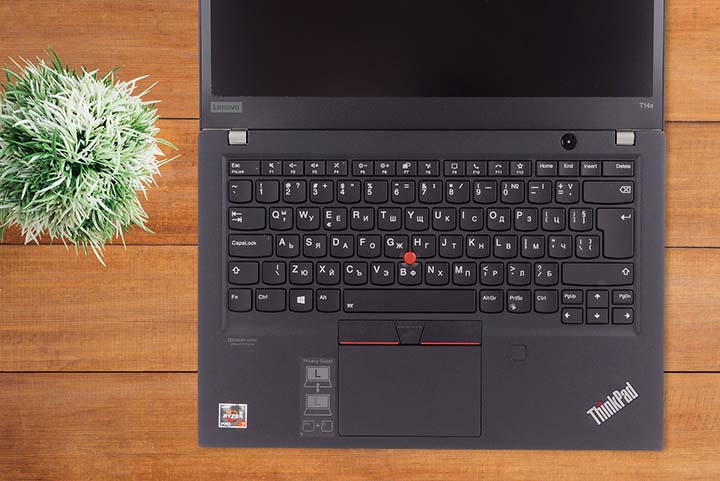 Similar to the previously released ThinkPad laptops, the keyboard of the T14s gave us an extremely comfortable typing experience. The keyboard set is illuminated by an LED system with 2 levels, allowing me to easily use the keyboard set in different environmental lighting conditions.

The buttons of this keyboard set have a deep travel and provide very good tactile feedback. The movie table set has a scientific layout, allowing me to quickly get used to it after only a short period of use.

The touchpad of the device is located right below the keyboard. The surface of this touchpad has a good level of finishing, allowing me to easily control the mouse pointer to interact with different applications on the Windows 10 operating system. 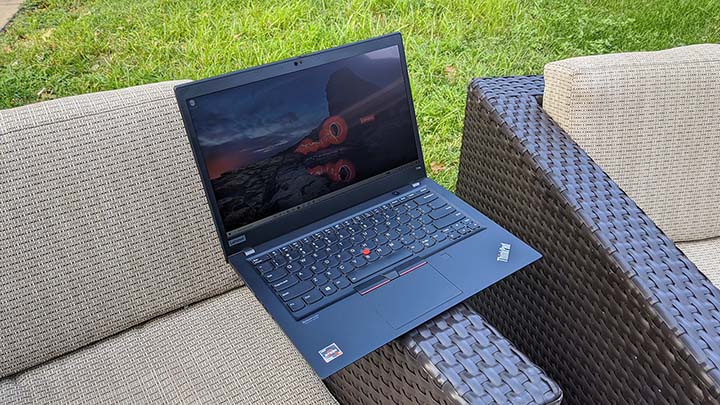 The ThinkPad T14s is equipped with a 14-inch diagonal screen with a resolution of 1920 x 1080p. The laptop we use in the article uses a screen version with a theoretical brightness level of 300 nit.

In actual use, the screen of the T14s delivers very good picture quality, with excellent color and contrast representation. However, the brightness level of this panel is a bit low, making the content on the screen not very clear when used outdoors.

In this performance evaluation section, we will let the ThinkPad T14s perform different benchmark tests, then compare the test results of the laptop with other models in the same segment. Compared models include the Acer TravelMate P6, Dell Latitude 7410, Asus ExpertBook B9450 and Lenovo ThinkPad T490s. The models compared are all equipped with 10th generation Intel chips, with the exception of the T490 with the older Core 5 series of chips.

On the video transcoding speed test with the HandBrake application, the ThinkPad T14s completed the test in less than 10 minutes. This result is again much faster than the segment average.

To test the graphics processing ability, we use the Sky Diver and Fire Strike test in 3DMark. In this test, the ThinkPad T14s scored 10538 and 2808, respectively.

Overall, the ThinkPad T14s is a laptop with a comprehensive overall performance level that can handle all basic workloads quickly and efficiently.

The ThinkPad T14s had a pretty long battery life in our test. To test the battery life of the laptop, we fully charged the battery, then switched the laptop into power saving mode, and turned off the Wifi connection. The laptop will then run a 720p video continuously with 50% screen brightness and 100% speaker volume.

In our battery life test, the Lenovo laptop powered off after 12 hours and 51 minutes. This is a very good battery life result, and should allow you to use the device comfortably throughout the workday.

Lenovo ThinkPad T14s is a quality office laptop model in the high-end price segment. The series has an all-round level of performance that allows us to quickly complete all of our daily workloads quickly and reliably.

And similar to the previous ThinkPad laptops released by the company, the ThinkPad T14s is equipped with a top quality keyboard in the segment. Its keyboard set gives us a comfortable and accurate input experience.