The consumption of alcoholic beverages during pregnancy, even in small doses, can have serious consequences for the baby’s health. Alcohol passes from maternal blood to the fetus through the placenta, causing a series of disorders in view of the inability of the fetus’ liver and kidneys to eliminate alcohol. It’s the call fetal alcohol syndrome. 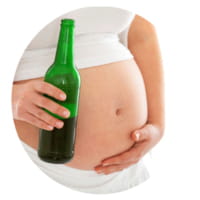 Drinking in the first weeks of pregnancy

The sooner the pregnant woman starts drinking alcohol, more problems will be caused to the baby, especially to the central nervous system. Fetal alcoholization is the main cause of mental disability among children. The current medical recommendation is that women should not consume any amount of alcohol during pregnancy. Zero alcohol tolerance should also be extended during breastfeeding.

Alcohol consumption by pregnant women increases the risk that the child will be born with Low weight and it also increases the possibility of premature birth.

Some of the possible complications due to fetal alcoholization are the growth retardation, mental problems of learning, memorization and attention. The risk of miscarriage is also high. Fetal alcohol syndrome causes cranial box malformation and the brain and central nervous system abnormalities, translated into delayed mental development, hyperactivity and inability to control feelings of anger and sadness.

Alcohol-free beers from like 0.0% can be consumed by pregnant women. However, you must pay close attention to the labels to confirm that there is no alcohol in the beer. It is also advisable to inform this type of consumption to the doctor and to interrupt it in case of professional recommendation.